Today was Fed Day; the FOMC kept rates unchanged, as expected. There were a number of questions from the press about the Fed’s Not-QE money printing policy, although nobody had the temerity to use those words. Powell suggested that the Fed was still puzzled about why those pesky banks were not lending into the repo market. Nobody mentioned the word “Lehman” or “crisis” – that would have been tacky. Still, there was more than one question about repo in today’s press conference. That’s progress of a sort.

Gold moved steadily higher going into the FOMC announcement, and spiked up during the press conference, holding on to most of the gains through the close. The long white candle was a bullish continuation, and forecaster moved higher into what is now a strong uptrend. Gold is now back above its 9 MA, which is a positive sign, as is gold/Euros. Gold remains in an uptrend in the daily and weekly timeframes. Gold/Euros weekly also moved into an uptrend after today’s rally.

Futures are predicting a 9% chance of a rate cut at the Fed’s next meeting in January 2020. 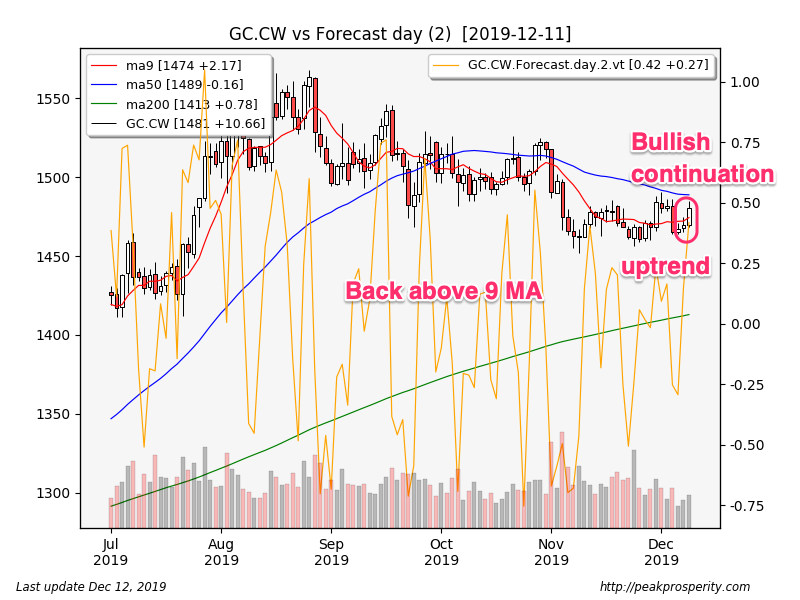 Silver’s rally started just after the US market opened, and took another minor leg higher after the FOMC announcement and press conference. The swing low/long white candle was mildly bullish (31%) and forecaster jumped into an uptrend. Silver’s rally took it (just barely) back above its 9 MA, which is bullish. Silver is now in an uptrend in both daily and weekly timeframes. 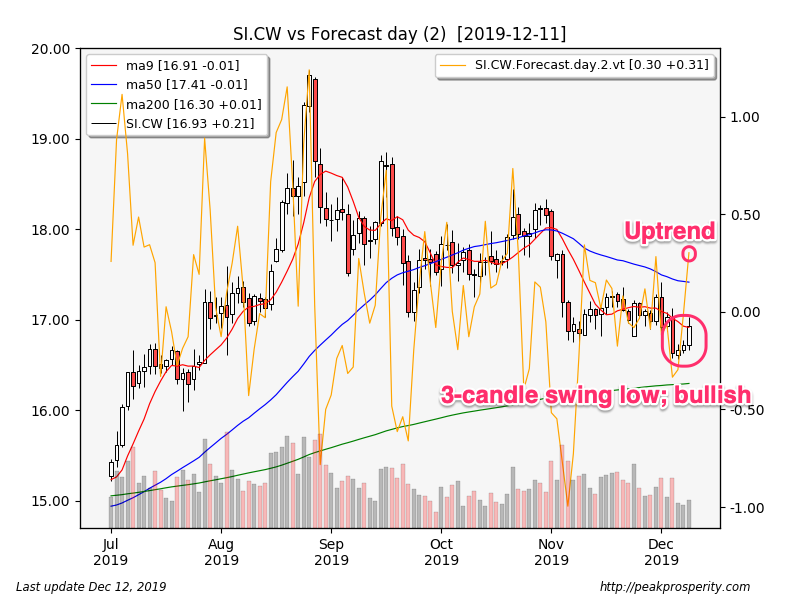 Miners looked strong today, rallying early along with silver, then spiking up higher during the FOMC announcement and press conference. GDX rallied +2.14% on heavy volume, and GDXJ shot up +3.06% on extremely heavy volume. XAU moved up +2.86%, the opening white marubozu was a bullish continuation, and forecaster jumped into a strong uptrend. XAU broke out to a new 4-month high today; with today’s breakout, the mining shares continue their pattern of higher lows and higher highs, which is the key sign of an uptrend. XAU is now back in an uptrend in all 3 timeframes.

Contrast the mining share chart with silver: higher highs on the miners, and lower lows on silver. 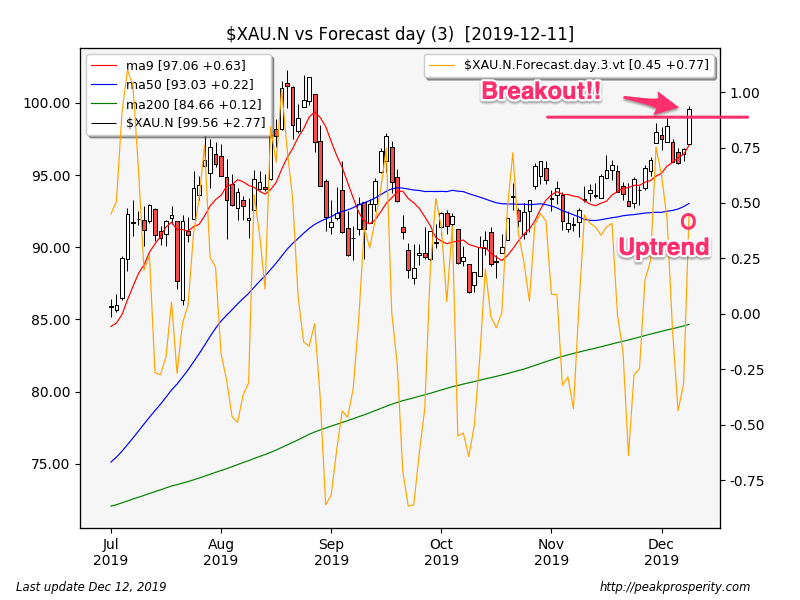 The buck dropped -0.34 [-0.35%] to 96.62 on extremely heavy volume. The long black candle was a bearish continuation, and forecaster plunged into a strong downtrend. Today’s plunge took the buck down to a new 6-month low. The buck is back in a downtrend in all 3 timeframes. Given the brisk move lower in the buck today, gold probably should have done better – although there was a whole lot of new paper rained onto the market.  Maybe that’s why. 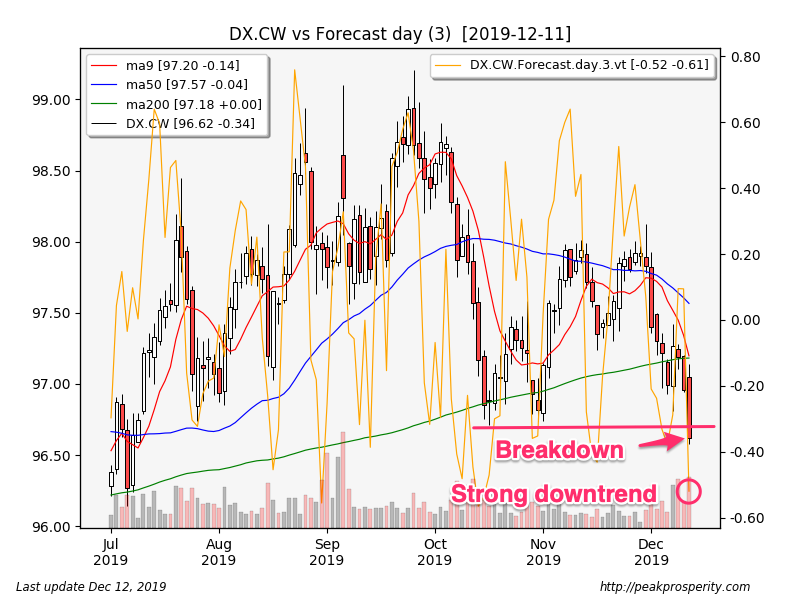 Crude dropped -0.30 [-0.51%] to 58.60 on moderately heavy volume. The spinning top candle was a bullish continuation, and forecaster moved lower but remains in a modest uptrend. Crude remains in an uptrend in all 3 timeframes.

TLT climbed [+0.79%], the opening white marubozu was a bullish continuation, and forecaster moved up into a strong uptrend. The 30-year yield fell -3 bp to 2.23%.

TY rose [+0.29%], the opening white marubozu was a bullish continuation, and forecaster moved higher, but not quite enough for an uptrend. TY remains in a downtrend in all 3 timeframes, although both daily and weekly are on the edge of a reversal. The 10-year yield fell -4.3 bp to 1.79%

JNK moved up [+0.22%], the closing white marubozu was a bullish continuation, and forecaster moved into what is now a very strong uptrend. Today was a new 2-month high for JNK.

BAA.AAA differential fell -2 bp to +86 bp. No worries about credit according to this indicator; if anything, concern seems to be dropping.

That sums to: “inflation slightly above target”, if you are the Fed. But at today’s press conference, Powell said that he wants to see inflation rise and hold above the target before considering rate hikes. He wants “persistent” inflation.

I have a suggestion for him: measure inflation properly, and – presto – you will get exactly what you are looking for. If we forced all the workers at the Fed to pay cash for their own medical care, they’d get the message even faster.

Inflation concerns, put to sleep for decades due to the re-jiggering of the CPI by the government – and the emasculation of labor by globalized capital – may be awakening anyway. We are seeing a steady move higher in commodity prices, and even government CPI is starting to run a little hot. With the ten-year below 2%, what will happen to long rates if inflation worries start to reappear?

Something to think about.

And how about those mining shares? 🙂 Just saying.

It sooooo curious how virtually every time we start to see a turn down in stocks, a tweet from Trump or a headline emerges that a trade deal is very close.   This time, it is a BIG trade deal that is very, very, veeeeeerrrry close.  It is going to happen THIS time.  For sure!

It is also sooooo curious how virtually every tweet gets discussed, dissected, and disassembled in almost always a negative light, in virtually every media outlet.  But you hardly hear a word about these kinds of tweets in the context of manipulating markets.  I wonder why that is?  I don’t really, wink wink.

Anyway, another Tweet saves the day and bombs gold and silver, yet again.

My prediction is that the tariffs will never see the light of day (they’ll get postponed again and again), and the prospects of getting a deal will remain close enough to be a useful tool to impact markets until the next election.

Stocks were looking weak, gold was soaring, all of that turned around in a millisecond when trump sent out his latest Plunge Protection Tweet.

They got Al Capone on tax evasion.  Why aren’t the democrats taking Trump down for market manipulation?

Oh that’s right.  Because their wealthy backers love it just as much as Trump does.

Here’s the trick to dealing with this situation:

Right now, the market is going up on “good news” – or propaganda, or whatever.  Doesn’t matter.  This is just a signal.  When the market stops going up on this signal, THAT is when you will know when to go short.  THAT is your sign.

Knowing this, you can remain relaxed as an observer of things you cannot control.  Markets seldom do “what you think they should do.”  If they were that predictable, everyone would be rich.

It is actually really nice to have such a reliable signal.  Once this signal stops working…its over.

The way I see it the signal to watch for is a very steady slow climb up in the “markets” up until a catastrophic drop.  I’d definitely watch for those two things.

They got Al Capone on tax evasion. Why aren’t the democrats taking Trump down for market manipulation? Oh that’s right. Because their wealthy backers love it

To quote Bernanke in the movie Too Big to Fail: “I don’t really understand why there needs to be so much tension about this. The country is facing the worst economy since the Great Depression. If the financial system collapses, it will take every one of you down.

We are merely replaying 2008 government control of the “free” market every day, month, and year. The game? Government props up the “Everything Bubble” via asset purchases. The public begs them to continue. It’s not just the “wealthy backers” either. Don’t 1/3 of Americans have a 401k, and they are much more likely to vote and give donations than those who don’t?

The “trade deal” tweets are merely a negotiating tool for Trump, a way to keep China front-and-center into the election. But why would the Dems go after Trump for market manipulation? That’s what he’s been elected to do! He’s get re-elected based on how well he does it.

Sidenote: anyone relying on PM during the next crisis should be prepared for another 1933 situation. The public owns basically no PM and it has no public support. Definitely hold physical and be prepared to wait a generation.

DaveF and Adam, are you saying that human beings (investors) were faked out yet again by “China trade deal almost done” tweets, or do you see the PPT pushing the market with the excuses offered to the public being the “almost China trade deal?”

I’m suspecting that the public is not ready to “know” that their markets are centrally managed and need to be offered a fictional reason for the upswing.

I’m saying that “the market in aggregate” is still biased towards the upside.  I don’t try and slice the market into “investors” and PPT and hedge funds and index funds and algos and companies buying back stock.  I don’t have the data to do this.  Banksters can do this, since they see the order flow, but not me.

The market aggregate is voting “up” right now.  Once the market stops rising on good news – lets say it starts to sell off on good news – then that’s the clue we have been waiting for.  The market will switch to voting “down” and not all the tweets and the PPT in the world will stop it.