Very productive conversations going on with China! Watch for some important announcements!

Is Trump purposely tweeting in order to pump the equity market? I suspect so. However copper was the big winner, not SPX.

Gold’s high wave candle was neutral, but forecaster plunged –0.41 to -0.20, which is a sell signal for gold. Gold still remains in an uptrend in the weekly and monthly timeframes, and in all timeframes for gold/Euros.  I’m not so worried about this sell signal – gold’s drop today was entirely a currency effect.  Gold in Euros continues to look strong. 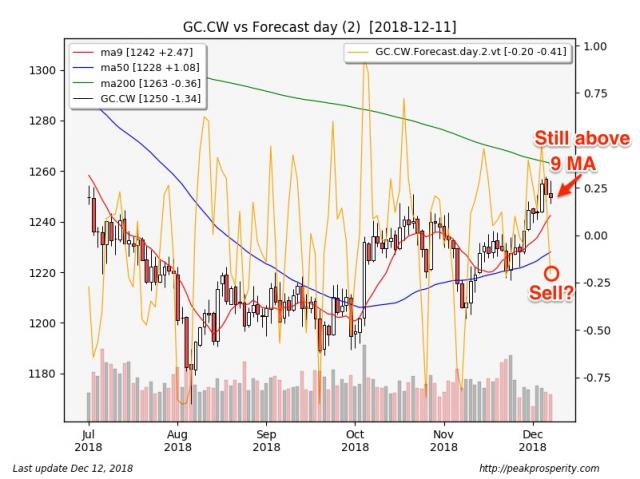 Unlike gold, silver made a new high today, but it ended up losing most of its gains; the high wave candle was a bullish continuation, but forecaster dropped -0.04 to +0.03. Silver most likely outperformed gold as a result of a strong rally in copper. Silver also unwound the weekly sell signal today; that leaves silver in an uptrend in both the daily and weekly timeframes. 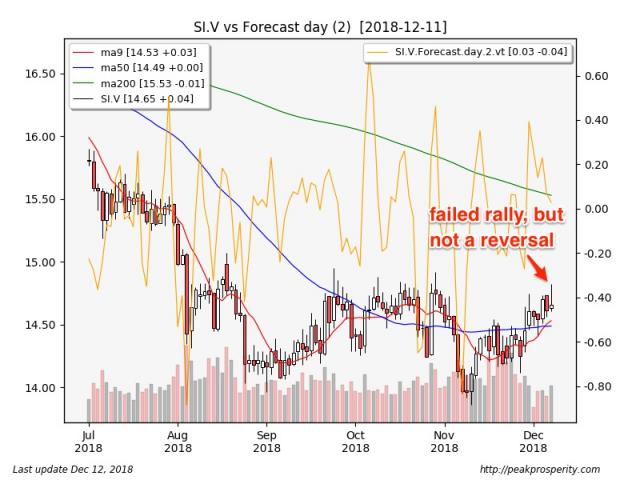 Miners were split, with GDX falling -0.60% on heavy volume, while GDXJ climbed +0.68% on light volume. XAU fell -0.46%, but surprisingly the long black candle was bullish. Forecaster dropped -0.15 to +0.38, which is still a fairly strong uptrend. XAU remains in an uptrend in all 3 timeframes.

The GDX:$GOLD ratio fell -0.49%, while the GDXJ:GDX ratio rose +1.29%. That’s bullish; the relatively stronger move in the juniors is an interesting outcome. 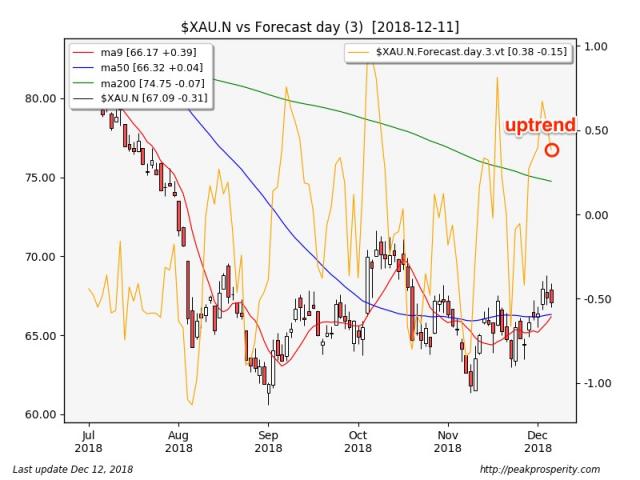 The buck moved up +0.16 [+0.17%] to 96.88. This was a new high for this cycle, and it pulls the buck up quite close to round number 97, which has been resistance for the past month or so. The long white candle was somewhat bearish (36% reversal), but forecaster jumped +0.22 to +0.21, which is a buy signal for the buck. That said, the buck remains in a downtrend in both the weekly and monthly timeframes. Something has convinced the longer-term forecasters that the buck will be moving lower.

The Euro did poorly [-0.30%], as did GBP [-0.50%]; that’s probably BRExit-related. May is on a European tour, where the usual suspects are telling her “there will be no modifications to the surrender document you already signed.” Where is Winston Churchill when you need him? What would he say to May’s BRExit? I refer you to a relatively famous fragment of his speech, delivered 4 June 1940:

My sense: Churchill would tell the EU to go stuff themselves.

Crude rallied +1.04 [+2.03%] to 52.20. Crude liked the API report which was surprisingly bullish (crude: -10.1m, gasoline: -2.5m, distillates: +0.7m), resulting in a 40c jump in price after market close. We might end up having 50 as the near-term low, although it will partially depend on what EIA shows tomorrow. The bullish harami candle was neutral, but forecaster jumped +0.53 to +0.24, which is a buy signal for crude. Weekly is moving much closer to a buy signal, but remains in a downtrend, along with the monthly, at least for now. If crude does rally, that mosts likely helps the equity market too. 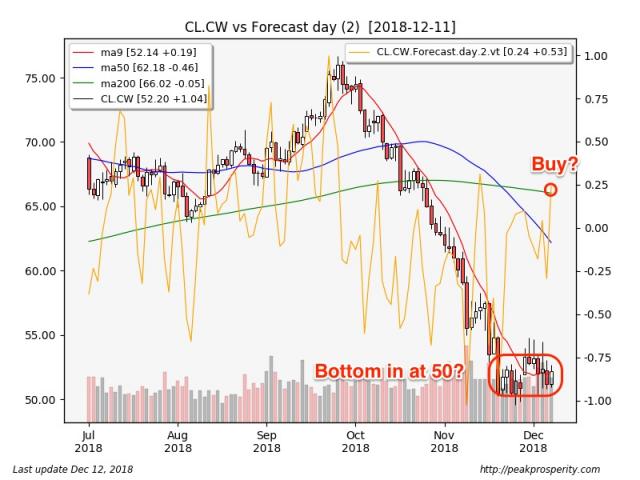 SPX fell -0.94 [-0.04%], virtually unchanged on the day. SPX was bid up very strongly in the futures markets overnight, but immediately after the open, the selling started, forcing prices right back down to even, generating an unpleasant long black candle – which was somewhat bearish (34% reversal), but forecaster rose +0.52 to -0.26, which suggests we may be engaged in a bottoming process. As it stands, the weekly forecaster is currently issuing a buy signal, although SPX remains in a downtrend in both the daily and monthly timeframes

TLT fell -0.02%; it made a new high, but could not advance. Forecaster has plunged down to almost even; TLT looks ready to reverse. TY did worse, off -0.17%, printing a swing high (48% reversal), but the plunge in the forecaster wasn’t quite enough for a sell signal. TY remains in an uptrend in all 3 timeframes. The 10-year yield rose +2.3 bp to 2.88%.

JNK rose +0.26%, a reasonably strong move, printing a strong swing low (62% reversal). Forecaster has yet to issue a buy, however. Junky debt may be the tell for where equities go next. At least in the short term anyway.

I think the stars & moons are aligning, at least short-term, to move equity prices higher. Oil may have found a low at 50, junk debt looks to be reversing higher, treasury bonds are probably topping out, Trump is contributing with his tweets about “productive conversations” in the China trade talks, and all of that lines up with a relatively near-term equity market rally. All that remains is for the selling pressure to end.

Is that happening?  That’s the open question. Today looked relatively ugly in the equity market. The strong overnight rally in the futures was treated as an opportunity to dump stocks. If “they” pushed prices higher in the futures, all it did was provide the people who wanted to liquidate a higher price at which to do so. As with bitcoin, the selling pressure from people looking to get out must first abate before any sort of rally can take place.

Longer term, the monthly timeframe looks pretty horrid, so my view is that we will likely see a medium-term rally in a longer term bear market.

I do think we’ll get a trade settlement with China, and a trade settlement is the biggest risk to any short trade. China already dropped auto tariffs from 40% down to 15%. Second-biggest risk is the Fed declaring that they are now “at neutral” after raising rates at the next FOMC meeting, which is 7 days from now. I’d say the odds of that are about 50/50.

Macron decided to appease the protesters by throwing money at them; whether that works, only time will tell. It will break the budget, moving France to a deficit of 3.6% of GDP. How can the EU spank Italy for its “crime” of a 2.4%/GDP deficit when France is now at 3.6%? If they do, that should be good for another 5% increase in Salvini’s poll numbers. Humans are hard-wired to resent unfairness – as are all species, because “being taken advantage of” is an incredible evolutionary disadvantage, and the biological machines we inhabit are almost entirely focused on leaving a copy of the genes behind.