US-China: While staff-level trade negotiations continue, no high-level trade talks have been scheduled. The new round of tariffs are scheduled to hit on Dec 15. Regarding the US Congress passing the Uighur bill that criticized China for throwing a million people into concentration camps for “re-education”, a Chinese foreign ministry spokeswoman warned (without a hint of irony) that “wrong words and deeds must pay the due price.” Criticism of bad deeds must be punished. Another Chinese official warned that if the US imposed tariffs on Dec 15, China would counter with retaliatory tariffs, and this would “seriously disrupt” the talks. Another official suggested that it might take a very long time for the two nations to reach a deal if they can’t find a way to do so while “the iron is hot.”

It would seem that the trade deal – and perhaps the directionality of US-China relations going forward – could come to a head just 9 days from now, due to Trump’s ticking clock.

Gold mostly went nowhere today, and in a narrow range. The doji/NR7 candle was unrated, and the forecaster moved higher into what is now a modest uptrend. Gold remains remains in an uptrend in both daily and weekly timeframes, while gold/Euros is mixed: no trend on the daily, slight uptrend on the weekly, and modest downtrend on the monthly. 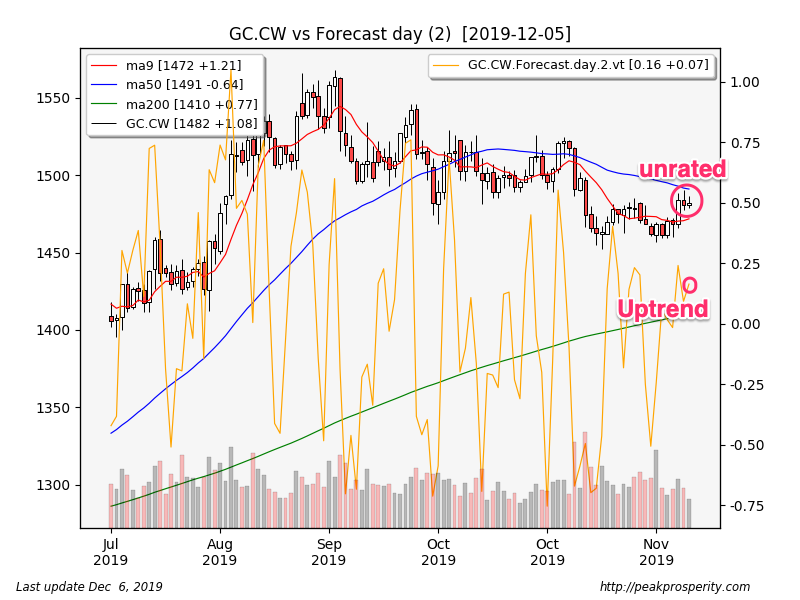 Silver’s rally occurred mostly during the London and US trading hours, peaking out in the afternoon in the US. The bullish harami pattern was in fact bullish (42%), and forecaster moved higher but remains in a slight downtrend. Today’s rally was not strong enough to pull silver back above its 9 MA. Silver remains in a downtrend in both daily and monthly timeframes, but silver’s trends are all very weak – that suggests silver could go either way at this point.

COMEX SI open interest fell -3,277 contracts. That’s 7 days of global production removed from the board – a reasonably large amount of short-covering happened today, which I take to be a positive sign. Silver OI is now at 116% of annual global production; that’s down 2% from yesterday. 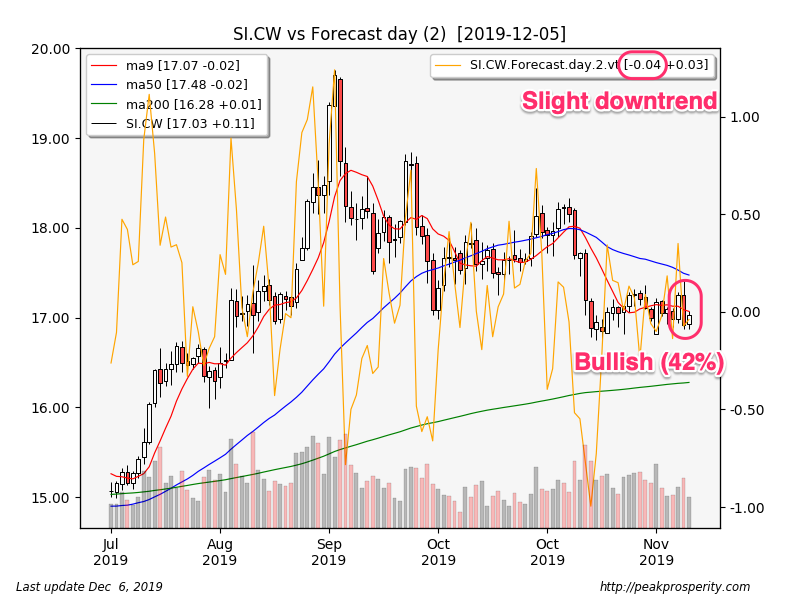 Miners gapped down at the open, rallied along with gold until the early afternoon, then fell into the close. GDX climbed +0.51% on moderate volume, and GDXJ moved up +0.38% on moderately light volume. XAU rose [+0.89%], the long white candle was a bullish continuation, and while forecaster fell, it remains in a reasonably strong uptrend. XAU remains in an uptrend in all 3 timeframes, and all of the trends look pretty good. Today was another 3-month closing high for XAU. 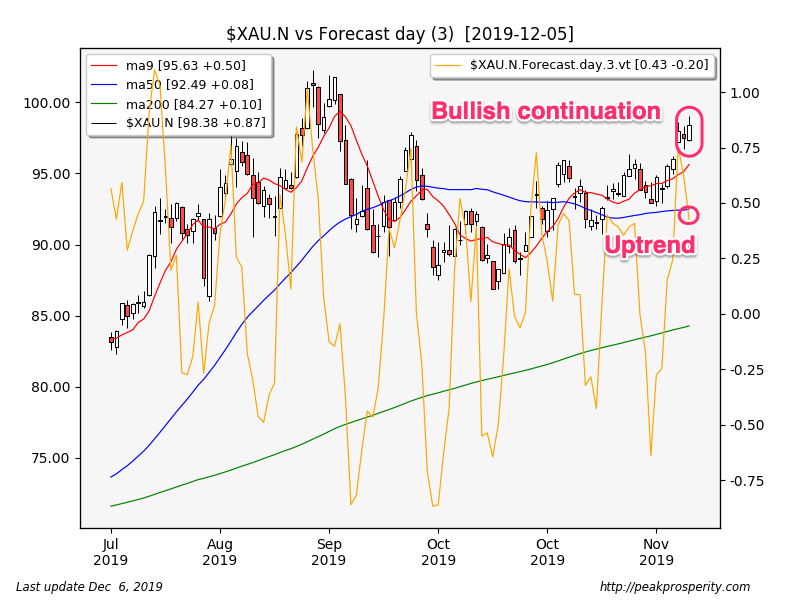 The buck dropped -0.23 [-0.24%] to 96.99 on moderate volume. The long black candle was mildly bullish (30%), but forecaster moved lower into what is now a strong downtrend. Today marked a new 5-week low for the buck; today’s drop also took the buck below its 200 MA, which is a negative sign. Today’s move also pulled the monthly forecaster into a downtrend; the buck is now in a downtrend in all 3 timeframes.  Given the decent fall in the buck, gold probably should have done better than it did today.

Large currency moves include: GBP [+0.43%]. PM Johnson promised that if he were elected, Brexit would be done and over within 100 days. He is heavily favored to win; the election will be held on Dec 12, 7 days from now.

Crude inched down -0.02 [-0.03%] to 58.18 on moderately heavy volume. Crude made a new high today around 9:30 am, but retreated into the close. The doji candle was bearish (40%), and forecaster fell, but remains in an uptrend. Crude remains in an uptrend in all 3 timeframes.

OPEC+ met today, and approved an additional production cut of 500 kbpd for Q1 2020. Left undefined are the details of who exactly will cut more. Today’s failed rally on – good news? – might be a negative sign for crude prices overall.

SPX moved up +4.67 [+0.15%] to 3117.43 on moderate volume. The high wave candle was a bullish continuation, and forecaster jumped strongly enough to move SPX back into an uptrend. SPX is now in an uptrend in all 3 timeframes.

JNK climbed [+0.09%], and the forecaster moved higher into its uptrend. BAA.AAA differential fell -1 bp to +86 bp. No worries about credit according to this indicator.

Not-QE: Fed Balance Sheet 4065.7B, +12.8B [+0.32%] w/w. At just 13 billion, it appears as though the rate of increase is slowing. Slowing, but not stopping. Whatever the Fed is papering over isn’t getting worse at an accelerating rate.

Things are getting bad and the rumor behind the curtain is that European banks will be prohibited from participating in repo for year-end. That is how bad things are getting.

Again, the two things I’m focused on are US-China trade (and now, bilateral relations), and the problems in the repo market.

Did you notice that’s another new high for the mining shares?

Nonfarm Payrolls comes out tomorrow at 8:30 am.

I’m considering adding some more tables to each of the items; specifically, more data on the state of the forecasters for each timeframe.  Here’s what that could look like for gold, silver, and the mining shares today.  I can have my python script generate the stuff – it won’t take me any more time

In brackets, “t” is the current trend strength, and “ch” is the change in the trend projection for this time period.  Forgive the bad formatting – it will be a nice table by the time I’m done.

Worth doing?  Too confusing?  Anything you’d like me to add and/or define better?  Are you already overwhelmed with data already?

I mean, this is stuff I like to see to help frame the longer term context, but I am concerned it may make your eyes glaze over with too much information…

This was a strong employment report; specifically, the “part time work” values I watch as recession predictors both fell.  This report is non-recessionary.