Gold chopped sideways for most of the day, but ended the day at the highs. The short white candle was a possible bearish reversal (36%), forecaster climbed, moving higher into its uptrend. Gold is in a downtrend in both the weekly and monthly timeframes.

Gold/euros climbed +2.49 [+0.16%] to 1519.39 on moderately light volume. The short white candle was a bullish continuation, forecaster climbed, moving higher into its uptrend. Gold/euros is in an uptrend in the daily and monthly timeframes.

In spite of a large plunge in the buck, gold didn’t do very much today. The candle print was a little bit bearish (it wasn’t very highly rated), there was only a small amount of shorting, and there were a reasonably large number of contracts standing for delivery at COMEX. The true test might come at the previous low at around 1860. My sense is that things could go either way right now. 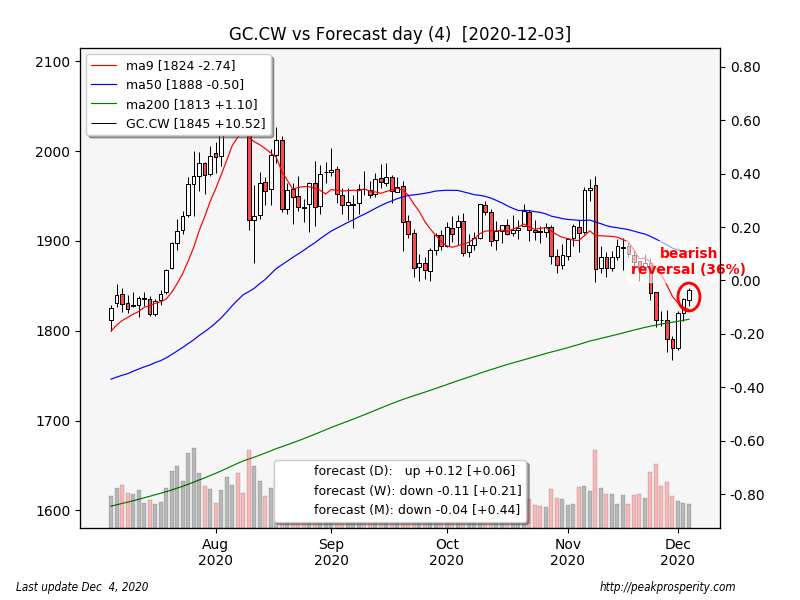 Silver chopped sideways in a relatively narrow range. The doji candle was unrated, forecaster dropped, but remains in an uptrend. Silver is in an uptrend in the daily and monthly timeframes.

Silver underperformed gold again today; the forecaster was a bit unhappy, but not enough to reverse direction. Very few contracts stood for delivery at COMEX, and there was a minor amount of short-covering. 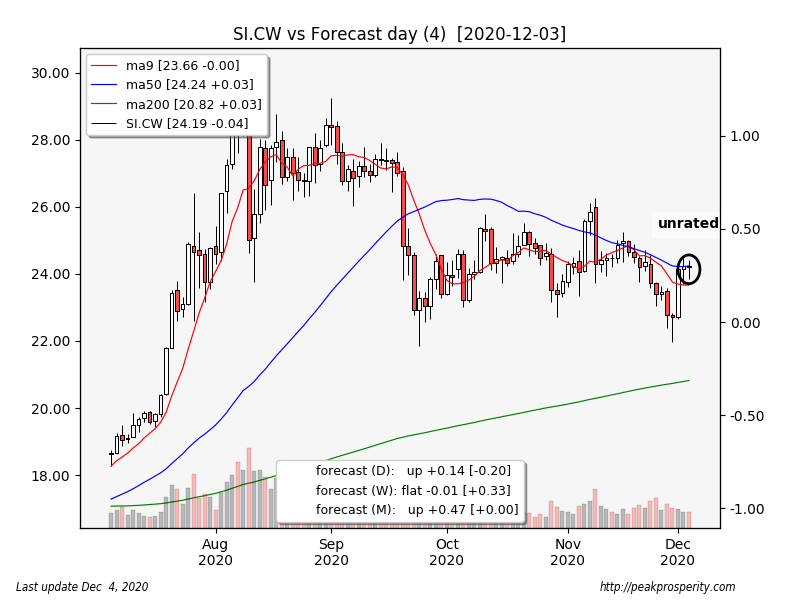 Bearish engulfing is a scary-sounding candle, but this one had a very low rating => not bearish. Forecaster agrees. Still, it does look as though the miners are seeing some selling pressure right now. Longer term trends are still mildly bearish. 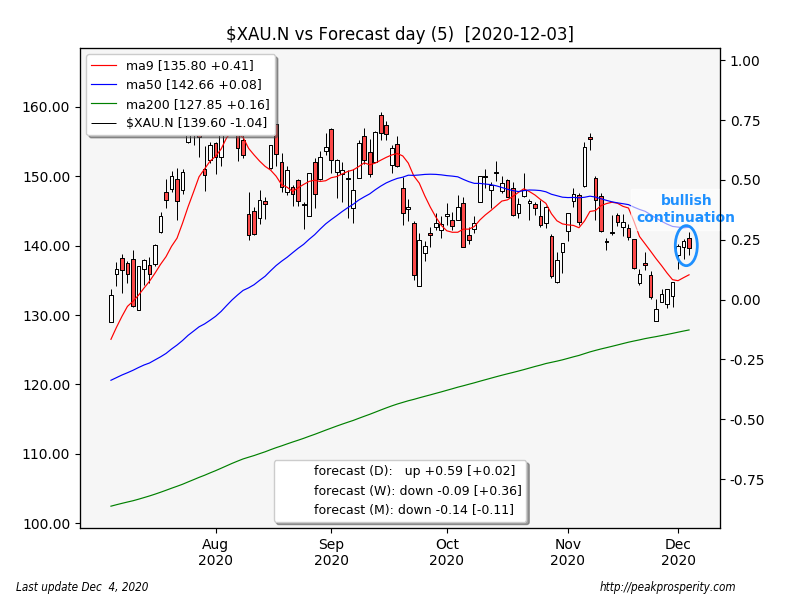 At the same time, palladium absolutely cratered today. Is this some palladium asteroid entering orbit? Or maybe automakers have decided to switch from palladium to platinum?

Copper dropped -0.01 [-0.29%] to 3.47 on moderate volume. The doji candle was a bullish continuation, forecaster dropped, but remains in an uptrend. Copper is in an uptrend in all three timeframes.

Copper remains in an uptrend. A strong uptrend. 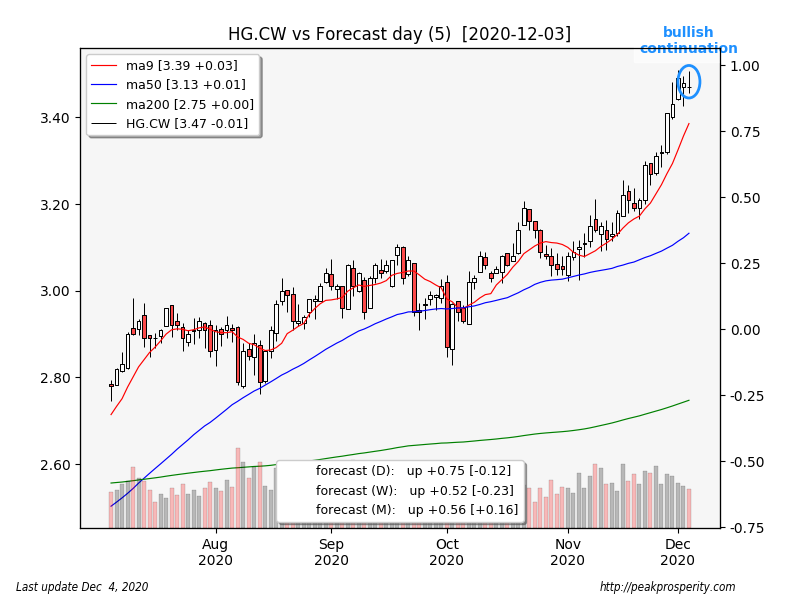 The buck dropped -0.40 [-0.44%] to 90.65 on moderate volume. The opening black marubozu candle was a possible bullish reversal (37%), forecaster dropped, dropping into a downtrend. The buck is in a downtrend in all three timeframes.

The buck made yet another new 3-year low today; the candle print was actually fairly highly rated, but the chances of reversal are just moderate. D/W/M RSI-7 is 11/29/26; the dollar is very oversold. 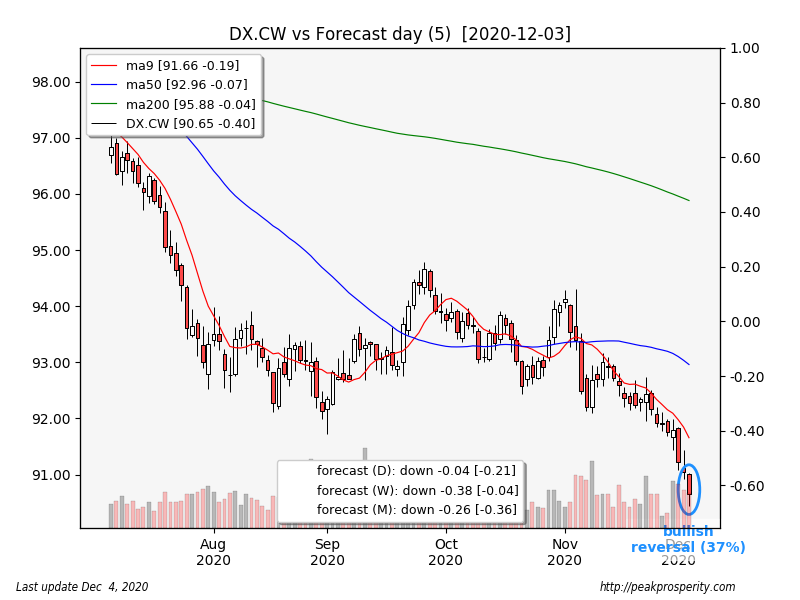 Crude climbed +0.66 [+1.47%] to 45.70 on moderate volume. The long white candle was unrated, forecaster climbed, moving higher into its uptrend. Crude is in an uptrend in all three timeframes.

The 3-day correction in crude may be over. Is crude preparing to break out to higher levels? It looks like it is. 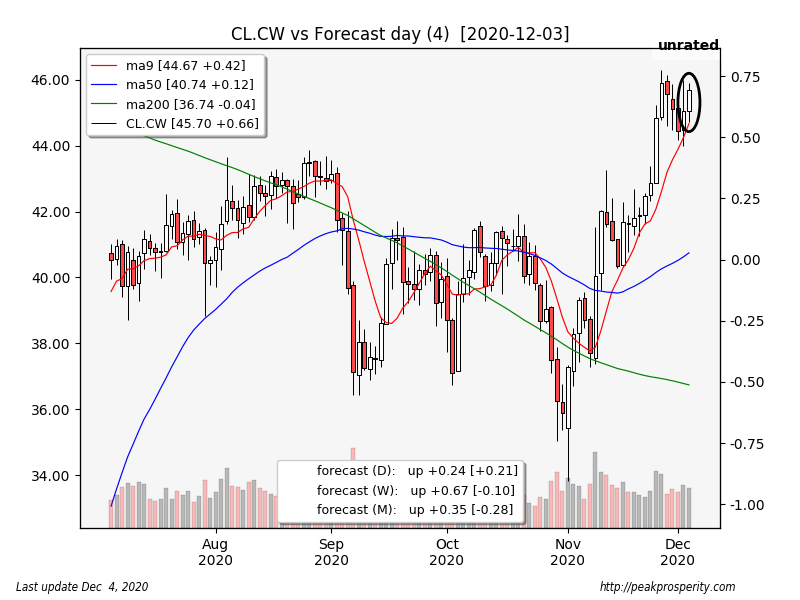 SPX fell -2.29 [-0.06%] to 3666.72 on moderate volume. The spinning top candle was a bullish continuation, forecaster dropped, moving into a state of no-trend. SPX is in an uptrend in the weekly and monthly timeframes.

SPX made a new all time high intraday, but could not hold on to the gains through the close. The uptrend appears to be weakening, especially in the shorter term. 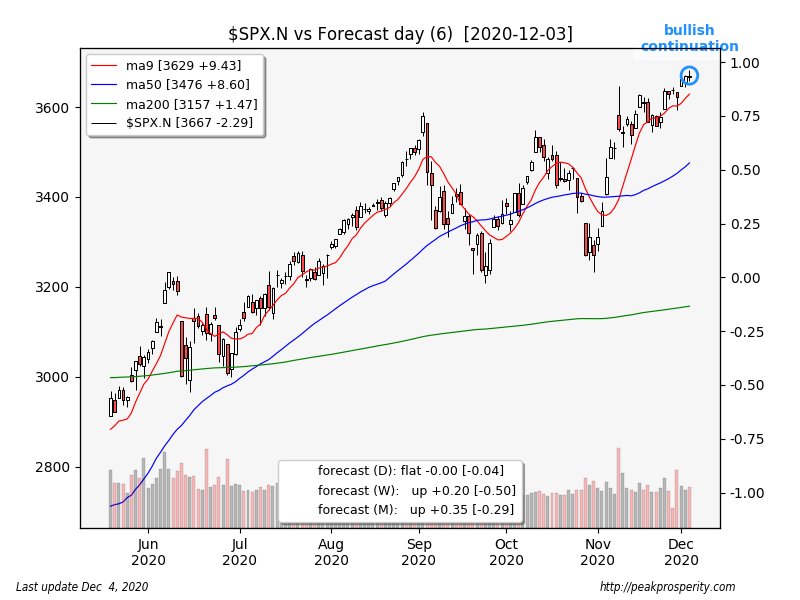 TLT climbed +0.81%. The swing low candle was a probable bullish reversal (50%), forecaster climbed, but remains in a downtrend. TLT is in a downtrend in both the daily and weekly timeframes.

TY climbed +0.12%. The bullish engulfing candle was a likely bullish reversal (60%), forecaster climbed, but remains in a downtrend. TY is in a downtrend in all three timeframes. The 10-Year yield fell -4.0 bp to +0.91%.

This may be a near-term low for bonds – the candle print was very highly rated, but forecaster isn’t convinced yet. 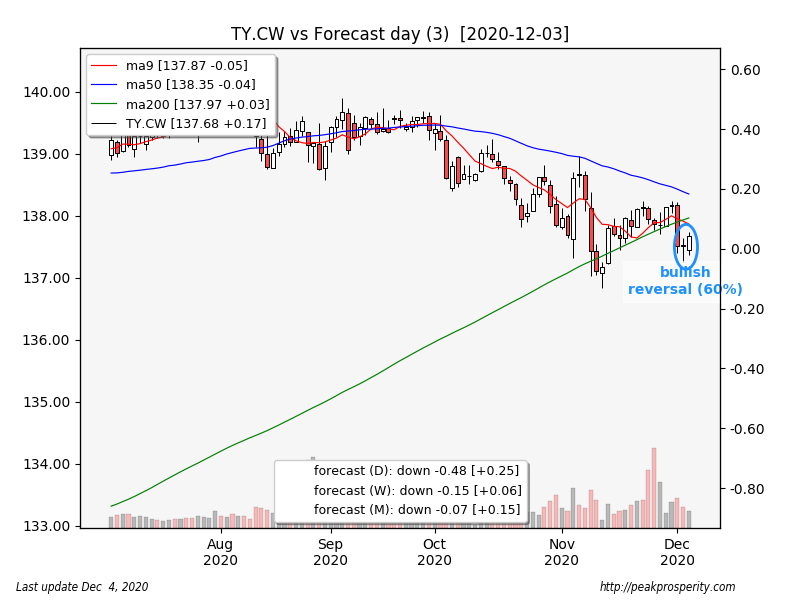 JNK inched up +0.06%. The short black candle was a low-percentage bearish reversal (22%), forecaster dropped, but remains in an uptrend. JNK is in an uptrend in the daily and weekly timeframes.

It was a new 9-month closing high for crappy debt, and a mildly-unpleasant-looking candle, but the rating was low; it is probably not a reversal. 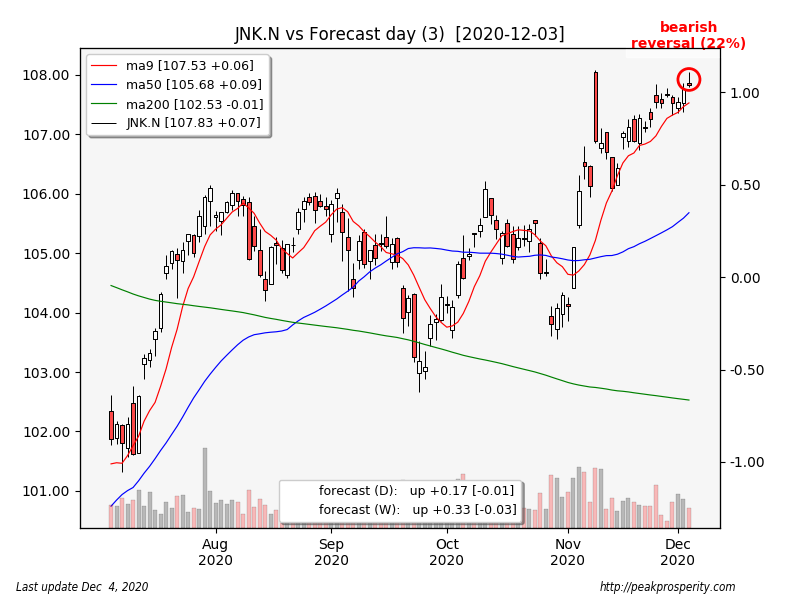 The GLD ETF tonnage on hand dropped -1.46 tons, with 1190 tons remaining in inventory.

Discounts on the physical ETFs are starting to fall; big bar premiums at retail are also starting to look a bit stronger.

Gold moved higher today, but silver and the miners retreated somewhat. Overall it seems as though the recent PM rally has run out of steam, at least for now. The miners tend to lead, and they are looking a bit tired – they definitely endured a bit of selling pressure today.

At the same time, the buck was hit pretty hard – and that didn’t seem to help gold much at all. In fact, most of gold’s move was just a currency effect.

Risk assets were mixed again; crappy debt, equities, and copper all went nowhere, but crude moved higher, and appears to be setting up for a breakout to new highs.

Bonds moved higher – perhaps even putting in a bullish reversal. The Fed isn’t buying very many bonds right now; perhaps this signal is actually legitimate? If so – that’s risk off.

States continue to bifurcate along the Blue/Lockdown and Red/Open paradigm. DeSantis of FL says his state will remain open, while in Los Angeles, you cannot even walk outside. In LA, obtaining natural vitamin-D and exercise are forbidden – COVID theater has utterly replaced science in government.

Does anyone talk about ivermectin? Certainly nobody from NIH. As Chris reveals in his latest video, ivermectin would reduce deaths by some 90%. It prevents infections, too – as effectively as those experimental vaccines allegedly do. It apparently even addresses long-haul symptoms in most cases. But all we hear are crickets from the incompetents at NIH. We deserve better. Across the Western world – we deserve better.

So why continue with the lockdowns? Why use a policy that has been shown not to work? If all the NIH gives you is a hammer, then every single problem looks like a nail.

In the markets, not all that much happened today; we still appear to be in that calm-before-the-storm period.

Been thinking about comparisons of mining costs.  Bitcoin, 1849 and 2020 gold, silver (pure silver mine vs byproduct), and platinum group metals.  It’s really crazy to think that grams of gold/tons of ore can make $ or energy sense.

Also been thinking about energy costs of food production vs calories generated.  Lettuce vs soybeans.  Grass fed beef vs grain fed beef.  ERoEI for food.  I suspect I would eat different if I had the numbers in front of me.

As DF said, enjoy the calm because the storm is coming.

“But all we hear are crickets from the incompetents at NIH.”

I could believe in human incompetence for a month or three.