Gold rallied all day long, closing at the highs. The swing low2 candle was a probable bullish reversal (50%), forecaster climbed, rising into an uptrend. Gold is still in a downtrend in both the weekly and monthly timeframes.

Gold/euros rallied +20.85 [+1.40%] to 1510.47 on moderately light volume. The bullish engulfing candle was a reasonably strong bullish reversal (43%), forecaster climbed, rising into an uptrend. Gold/euros is in an uptrend in the daily timeframe.

Today saw a strong candle print, a close back above the 200 MA, and the forecaster flip back into an uptrend. There was a small amount of short-covering, and a reasonably large amount of contracts standing for delivery at COMEX. The plunging dollar did seem to help, but the bullish reversal in gold/Euros says that today’s move wasn’t just a currency effect. 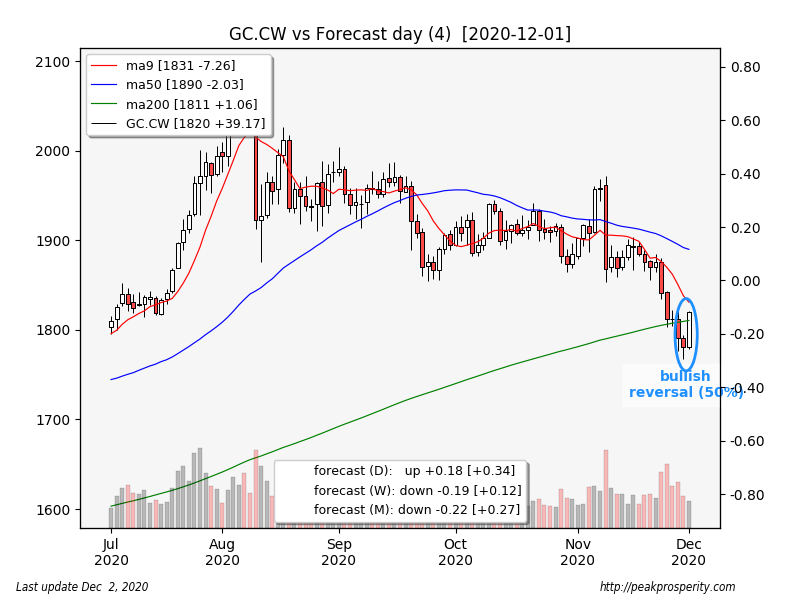 Silver also rallied for most of the day, ending at the highs. The swing low2 candle was a likely bullish reversal (70%), forecaster climbed, rising into an uptrend. Silver is in an uptrend in the daily and monthly timeframes.

The candle pattern was exceptionally highly rated, and forecaster is now back into an uptrend – today’s move wiped out more than 4 days of decline, and silver is now back above the 9 MA. There was not much short-covering, and there were not all that many contracts standing for delivery, but the price action was very bullish. 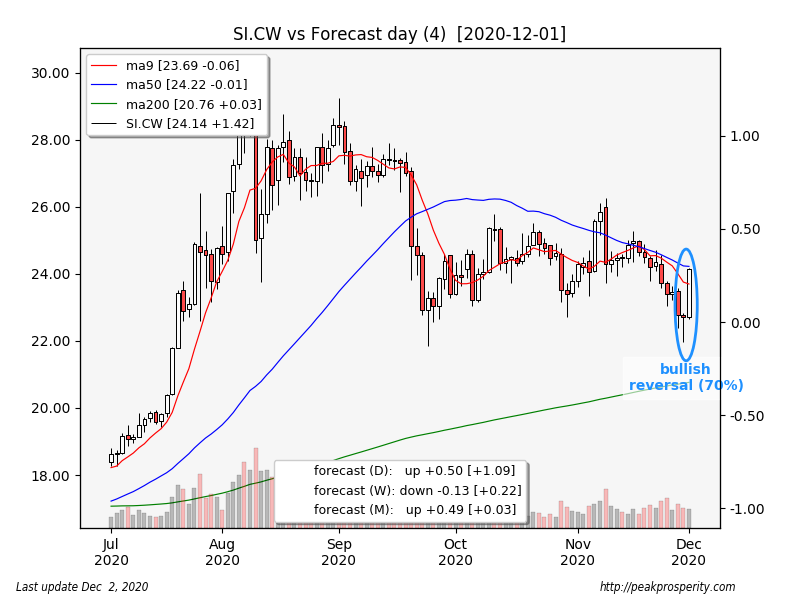 The miners gapped up strongly at the open, sold off in the first hour, then rallied into the close, ending the day at the highs. GDX jumped +3.69% on moderately heavy volume, and GDXJ rallied +5.36% on heavy volume. XAU moved up +3.85%, the spinning top candle was a bullish continuation, forecaster climbed, moving higher into its uptrend. XAU is in a downtrend in both the weekly and monthly timeframes.

The miners continue to do well – they were the “tell” in the whole PM reversal story over the past four trading days. That said – the miners do seem to be running out of gas to some extent. 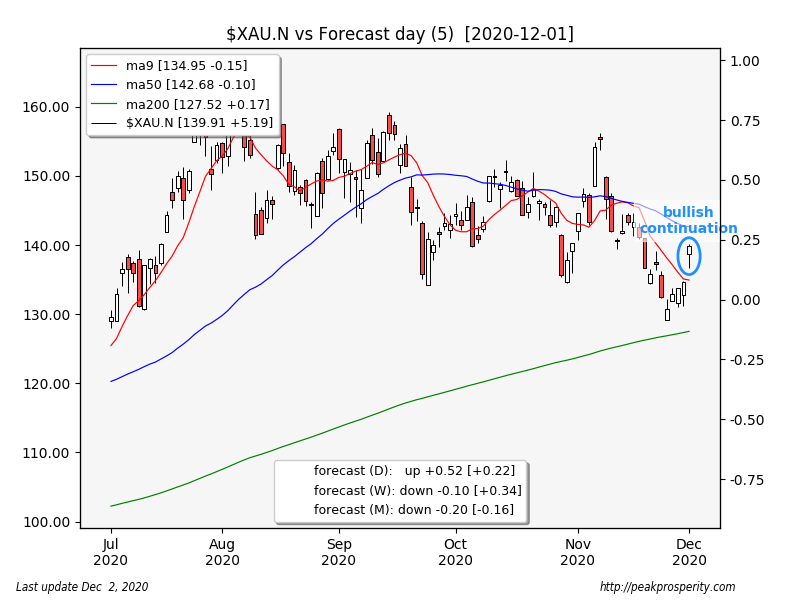 Copper rallied +0.06 [+1.75%] to 3.49 on moderate volume. The opening white marubozu candle was a bullish continuation, forecaster climbed, moving higher into its uptrend. Copper is in an uptrend in all three timeframes.

This was another 7-year high today; copper remains in a very strong uptrend. D/W/M RSI7 is 90/83/80. That’s quite overbought, especially in the daily timeframe. 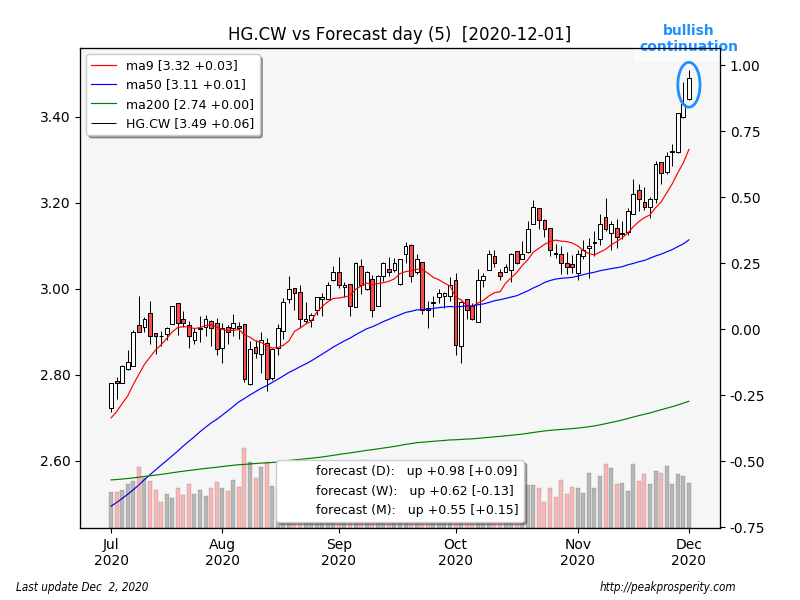 The buck plunged -0.57 [-0.62%] to 91.23 on moderately heavy volume. The strong line candle was a bearish continuation, and forecaster fell, dropping into a downtrend. The buck is in a downtrend in all three timeframes.

So much for that possible reversal yesterday – this marks a new 3-year low for the buck.

The rally in GBP is all about the hints that a Brexit deal will happen by end of week. Yes, Brexit is still a thing. The points remaining: fishing, competition, and governance. Will the EU fishermen continue to be able to fish in UK waters? And who will decide disputes? And how? I predict some agreement will be reached – if not before the deadline, then shortly thereafter. 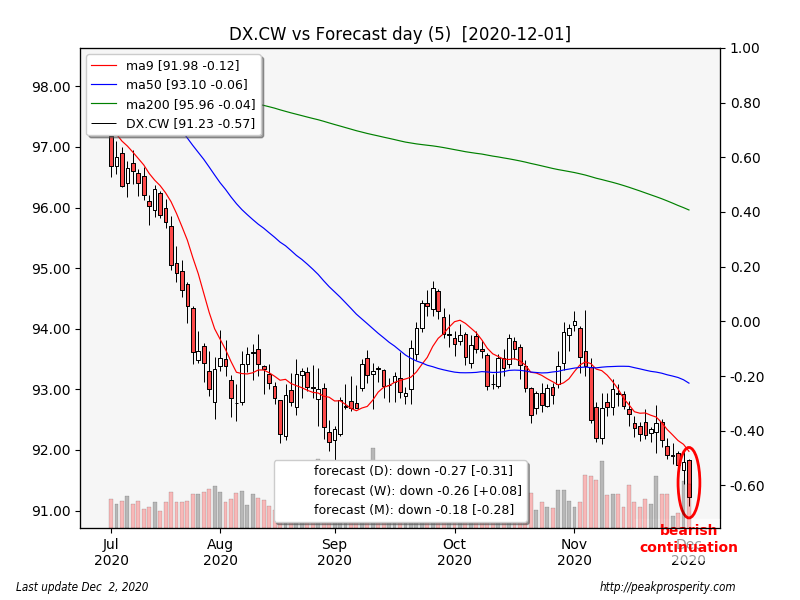 Crude plunged -0.67 [-1.48%] to 44.45 on moderate volume. The long black candle was a bearish continuation, forecaster dropped, moving deeper into its downtrend. Crude is in an uptrend in the weekly and monthly timeframes.

Crude continues to decline – having fallen for 3 straight days now. Crude remains in a mild downtrend. 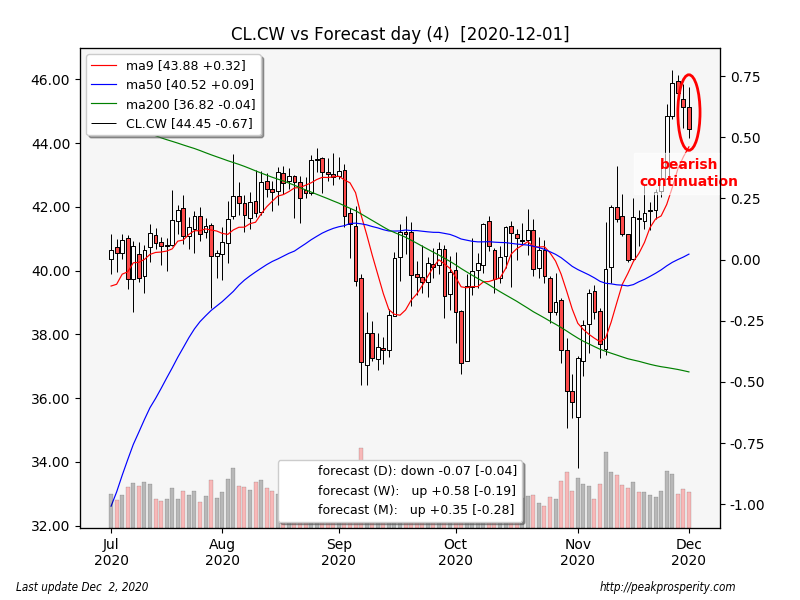 Today marks another new all time high for SPX; the hints of correction yesterday – gone. SPX is back in an uptrend. 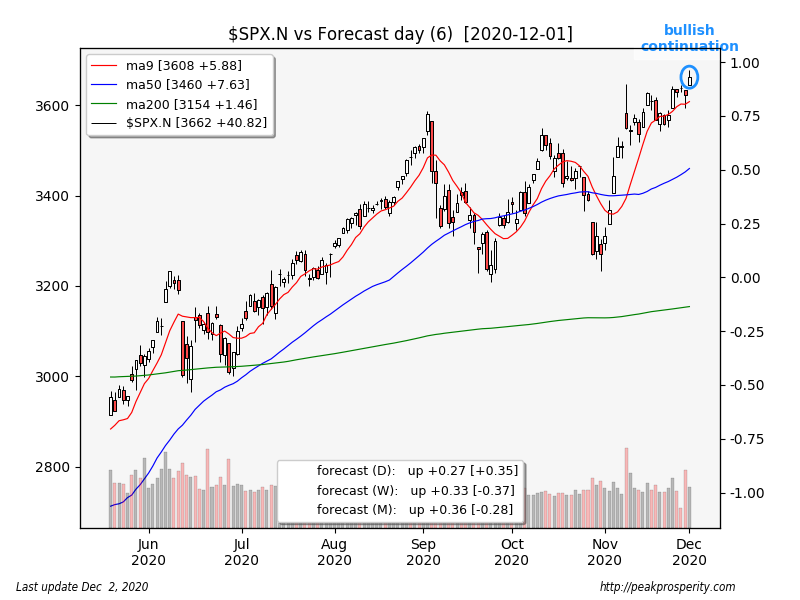 TLT fell -1.57%. The confirmed bearish doji candle was neutral, forecaster fell, dropping into a downtrend. TLT is in a downtrend in both the daily and weekly timeframes. The 30-Year yield rose +8.0 bp to +1.66%.

Bonds looked ugly today – the big move down happened roughly alongside the plunge in the buck. This makes some sense – bonds are a bet on the dollar. 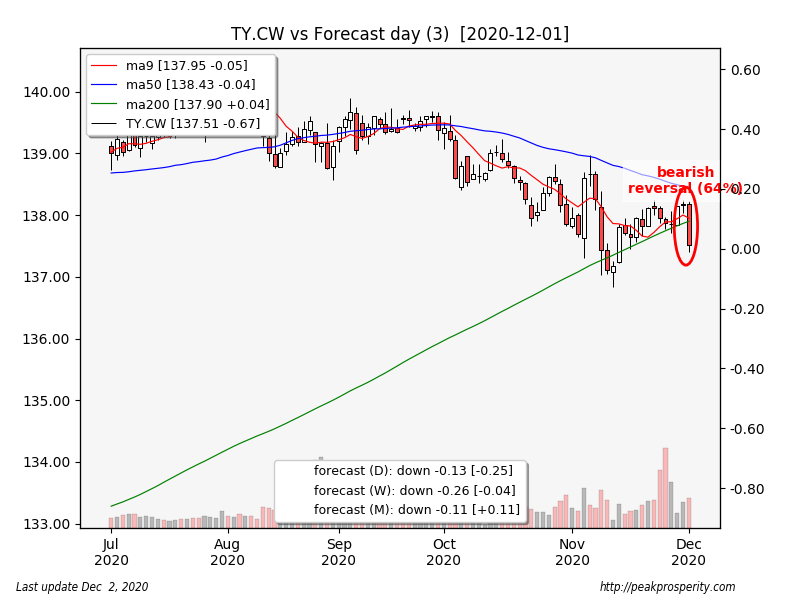 JNK moved up +0.01%. The short white candle was unrated, forecaster climbed, moving higher into its uptrend. JNK is in an uptrend in the daily and weekly timeframes.

No change for crappy debt – it remains above all 3 moving averages, and in a gentle uptrend. 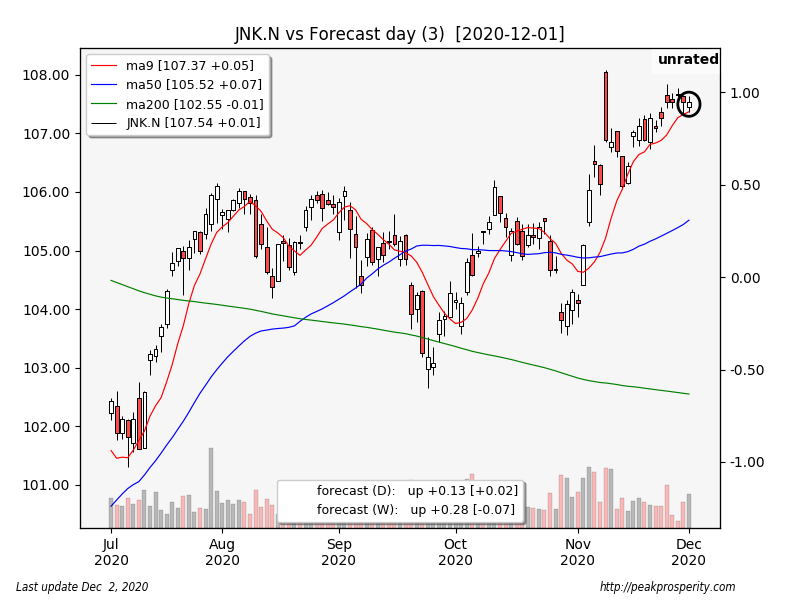 The GLD ETF tonnage on hand dropped -3.50 tons, with 1191 tons remaining in inventory.

Physical ETF discounts have declined somewhat, although they remain quite wide, while premiums on the big bars at retail have increased, especially for silver. This is a positive sign.

Gold, silver, and the miners all shot higher, with gold and silver printing swing low patterns. Silver looked strongest of the group. The miners didn’t rally quite as strongly as I expected, especially given the huge move in silver.

Risk assets were mixed; SPX hit a new all time high, copper made its own 7-year high, crude sold off, while crappy debt was mostly unchanged, but remains quite near its own 8-month high. Mostly, things look like risk on, at least for the moment.

Something caused both the buck, and the 10-year to sell off hard today. The moves weren’t exactly in synchrony, but both instruments did move sharply lower.

The currency news I saw included: not-President-Elect Biden asking Congress to pass a stimulus package, hope that the vaccines will save us all, and a probably-not-misplaced hope that “10 held by H for the Big Guy” would result in a much more compliant US foreign policy towards the CCP. The story seems to be: Corporate America can now get back to business as usual – globalization, jobs outsourcing, and resigning itself to IP theft. That’s all dollar negative.

Did today’s currency move cause the rally in PM? I don’t think it was the cause – but it probably helped. The primary cause was probably the prior decline organized by the banksters, as I said yesterday, and they were just unwinding this trade – or allowing it to unwind – today. I think there was probably also some help from the new stimulus hopes.

It was with a guy named Teddy Vallee of Pervalle Global. His thesis was that over the next few months there would be a liquidity crunch in the markets.

Basically, he says that the Treasury will issue more bonds than the FED’s QE will cover. This will suck capital from the markets and cause the dollar to rise. 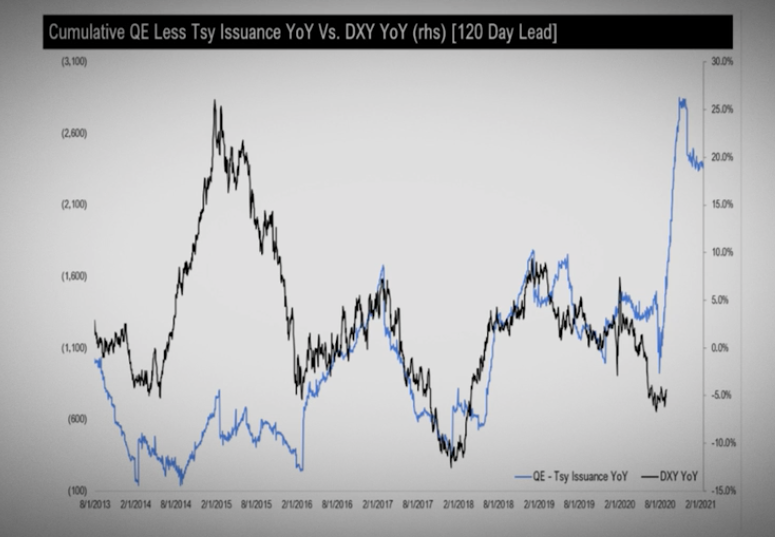 This makes sense to me because, first, managed money has oversized equity positions and must rebalance by the end to the year. So they will be pulling money from equities and putting it into bonds.

Second, the dollar looks like total crap right now and everybody, and I mean everybody, is betting on a dump. How likely is that to happen with everyone betting on it? It’s not.

Third, the inflation (commodity) trade needs to deliver some pain to wash out the scabs before the real bull market can begin later in 2021. Gold seems to be doing this now. The other commodity plays should follow its lead soon.

If one thing is for certain, liquidity drives all markets these days. A lack of liquidity seems unthinkable, which is why I’m thinking about it.

What do you think DF and braintrust?

I suggest that people with money have more money than ever.  There will be a liquidity crunch if they decide to withhold it, which, of course, might happen.  However, I think the future looks great to folks with money, so I don’t think a really, really bad liquidity crunch is coming.

Chris’ purchase of that lumber mill is an example.   I bought a new house.

My suggestion is to invest in things you find valuable.  And hang on, the ride could get bumpy.

At some point it will move from Phase 0 to Phase 1 and Eth will merge to Eth 2.

The upgrade moves Ethereum from proof of work to proof of stake.

Staking rewards are just around the corner, Well actually they are here now but you have to lock up your Eth for an indeterminate time.

Blockfi is now offering a Visa/BTC credit card with which you can earn 1.5 % BTC

So far, the bounce that a conspiracy nutter would have expected after November’s end has materialized.

For those who like their podcasts, the Grant Williams Podcast just posted an interview with Free Hickey that is fairly gold heavy in the first 20 minutes that Ive listened to.  He seems like a good combination of “core gold” position plus he has some trading wisdom that people like me could really use.