Gold took a small leg down during Asia, and then was pounded (just barely) through longer-term support during the strong move down during the US trading session, making a new low to 1461 before bouncing back into the close. The opening black marubozu was a bearish continuation, and forecaster inched higher, but remains in a strong downtrend. Gold remains in a downtrend in all 3 timeframes.

Futures are projecting a 5% chance of a rate cut in December. 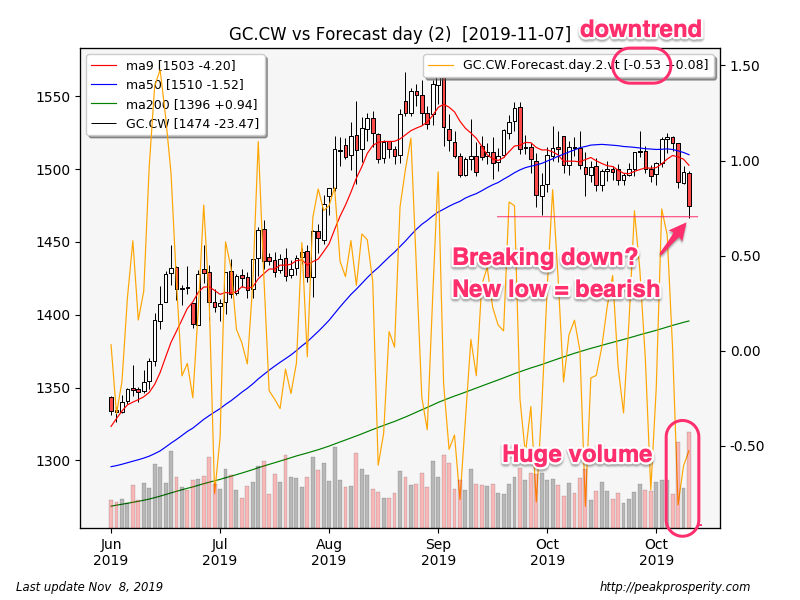 Silver fell along with gold – but it actually only started to break down seriously after gold fell through a recent low of 1482.   Silver’s long black candle was a bearish continuation, and forecaster dropped deeper into what is now a strong downtrend. Today’s plunge dragged the weekly into a downtrend too; silver is in a downtrend in both daily and weekly timeframes.  Silver managed to avoid a breakdown today. 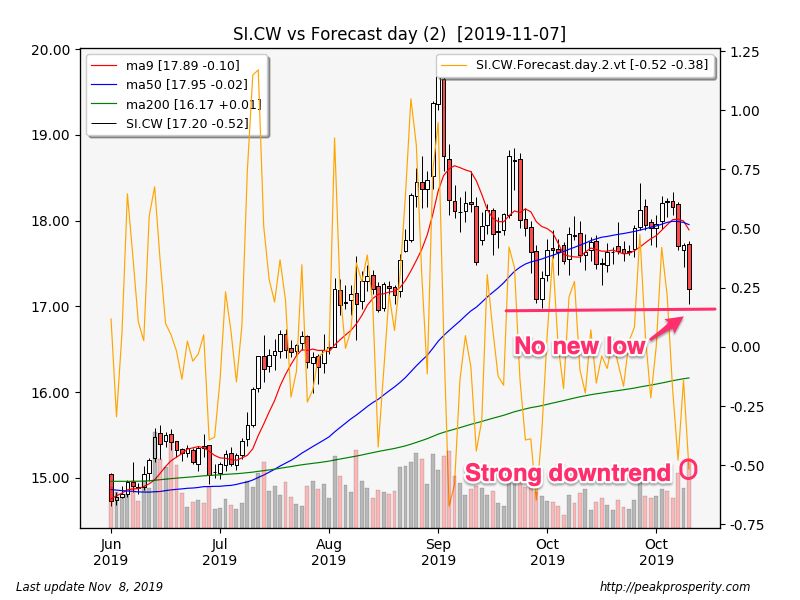 Miners gapped down at the open, and fell for the first half of the day, bouncing back somewhat in the afternoon. GDX plunged -2.97% on very heavy volume, and GDXJ tanked -3.89% on heavy volume. XAU fell -2.43%, the long black candle was a bearish continuation, and forecaster dropped deeper into what is now a moderate downtrend. In spite of today’s plunge, XAU remains in an uptrend in both weekly and monthly timeframes. What’s more, although XAU is now below the 50 MA, it is far from breaking down below its previous low; the miner charts really aren’t looking all that alarming, especially compared to that of gold. 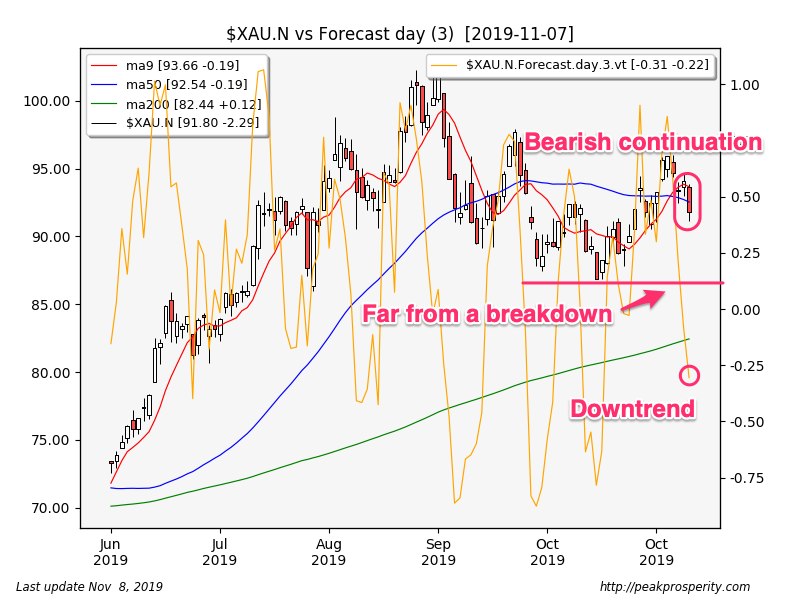 The buck rose +0.22 [+0.23%] to 97.74. The long white candle was a bullish continuation, and forecaster moved higher into what is now a reasonably strong uptrend. The buck remains in an uptrend in the daily and monthly timeframes.

Crude rose +0.68 [+1.21%] to 57.04. Crude rallied strongly for much of the day, but fell after running into resistance in the afternoon in New York. The spinning top candle was unrated, and forecaster inched lower but remains in an uptrend. Crude seems to be having a lot of trouble with the 200 MA; 4 attempts in 4 days have failed to move above it. Still, crude remains in an uptrend in all 3 timeframes.

Crude tends to rally when the US-China trade news is positive.

SPX moved up +8.40 [+0.27%] to 3085.18, which is another new all time high. The high wave candle was a bullish continuation, and forecaster moved lower but remains in a moderate uptrend. SPX remains in an uptrend in all 3 timeframes.

TLT plunged -1.81% [worse than the move in gold, even], breaking down to a new 4-month low. TLT has unwound almost all of the August rally. TLT remains in a downtrend. The 30-year treasury rose +10 bp to 2.40%. That is 45 bp from the lows set back in early September. TY dropped hard as well, losing -0.63%, the long black candle was a bearish continuation, and forecaster plunged into what is now a very strong downtrend. TY remains in a downtrend in all 3 timeframes. The 10 year yield jumped +11 bp to 1.93%. This is also a new 4-month high in yield/a new low for the 10-year.  Bonds are looking pretty ugly right now.  You can see that the 10 year has retraced almost the entire August rally. 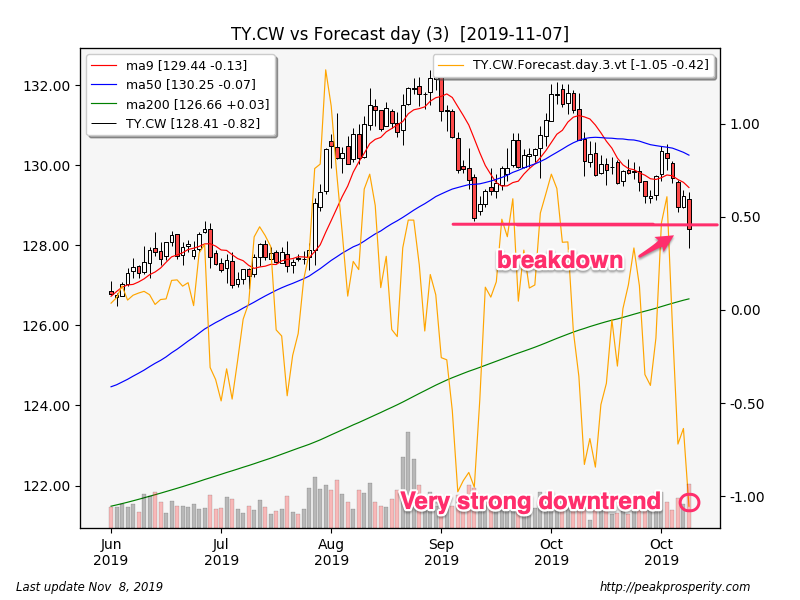 JNK inched down -0.02%, the spinning top was neutral, and forecaster inched higher but remains in a downtrend. JNK continues to look a bit dreary in spite of the repeated new all time highs in SPX. BAA.AAA differential rose +1 bp to +89 bp. Credit concern remains modest at best.

So was today’s big gold smash all about official intervention? Let’s look at the overall picture:

In the havens: bonds had a terrible day, breaking down to new lows, while gold was smashed, along with silver and platinum too.

The overall picture is one of the by-now-typical US-China happy trade news moves. So most likely, gold was not going to do well today, as its friends (the bond market) was selling off pretty heavily.

At the same time, the move in gold was probably larger than it “should have been”; I point to the absurdly high volume, and the large increase in OI on a down day, which is unusual. Gold OI is also at an all time high – there have never been more shorts in history at COMEX than there are right now. Normally, the OI drops as price falls; gold has fallen for 3 months now, but what has OI done?  It has shot to a new all time high.  In the chart below, see if you can see any instances of “new highs in OI as price falls” over the past couple of decades.  I couldn’t.  The standard thing is for OI to drop once gold tops out.

So this whole pattern feels just a little funny.  I conclude: “someone” is scared of a rising gold price, and so they are painting the tape more than a little right now.  The OI tells us this. 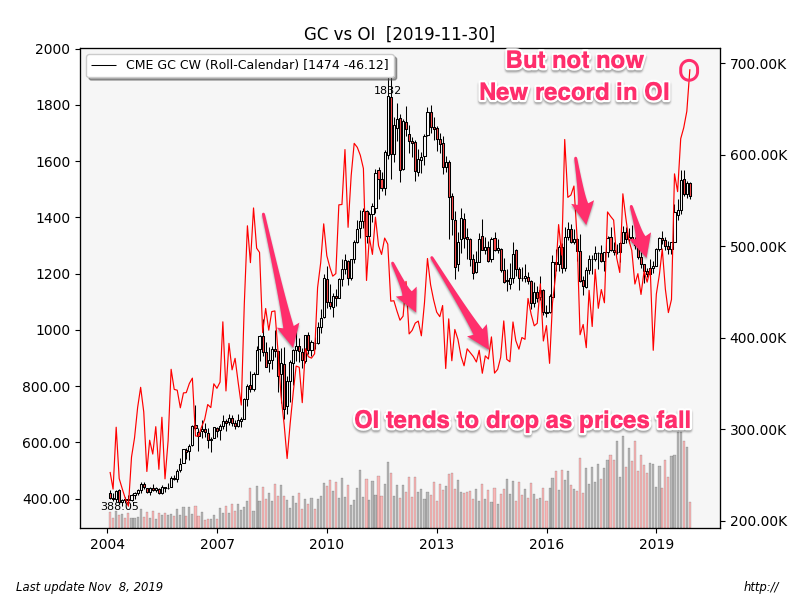 What’s more, at least right now, the miners are not sounding any sort of alarm for PM. The miner chart continues to look reasonably strong, and the drops in the shares don’t approach anything like what we saw during the big sell-offs over the past 7 years.  The miners aren’t buying the “bearish gold” story.  At least not yet anyway.

Last point: the WALCL series updated today. That’s the Fed balance sheet. We see an increase of about $20 billion this week to 4.04 trillion, up $279 billion from the lows set back in August. Money printing continues, and at a faster clip than during the previous QE programs too, although this week overall wasn’t as heavy as last week. 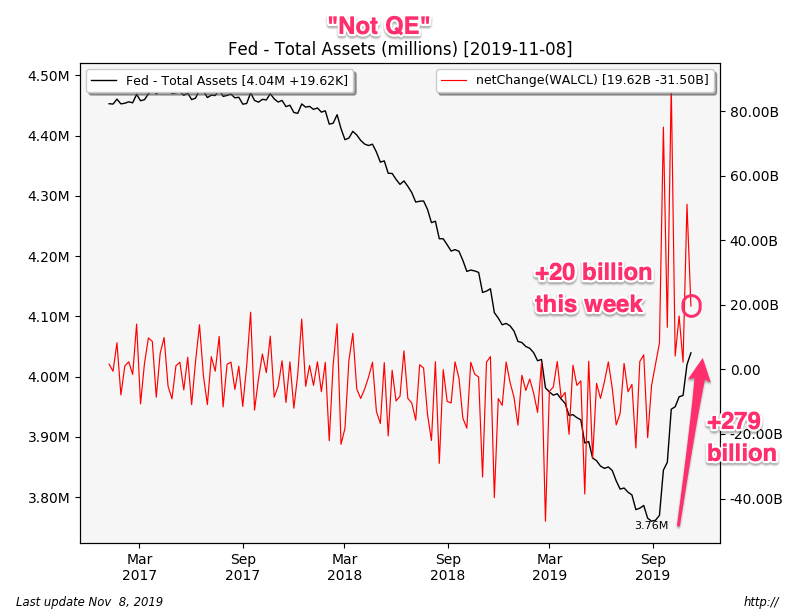 Great chart, Dave. I guess it really is “different” this time…

The series does go back to 1975, but you can’t really see enough detail with a longer time range – the monthly bars all blur together and it just feels too noisy.