It appeared that the positive sentiment from yesterday’s trade news was at least somewhat unwound today; the parties appear to be having trouble sorting out where they will sign the agreement. Trump wanted Iowa (Xi said no), and the tussle over location appears to be giving everyone a bit of pause.

Gold moved slowly higher for most of the day. The short white candle was unrated, and while forecaster did bounce back, it remains in a strong downtrend. Gold remains in a downtrend in all 3 timeframes.

Futures are projecting a 8% chance of a rate cut in December. 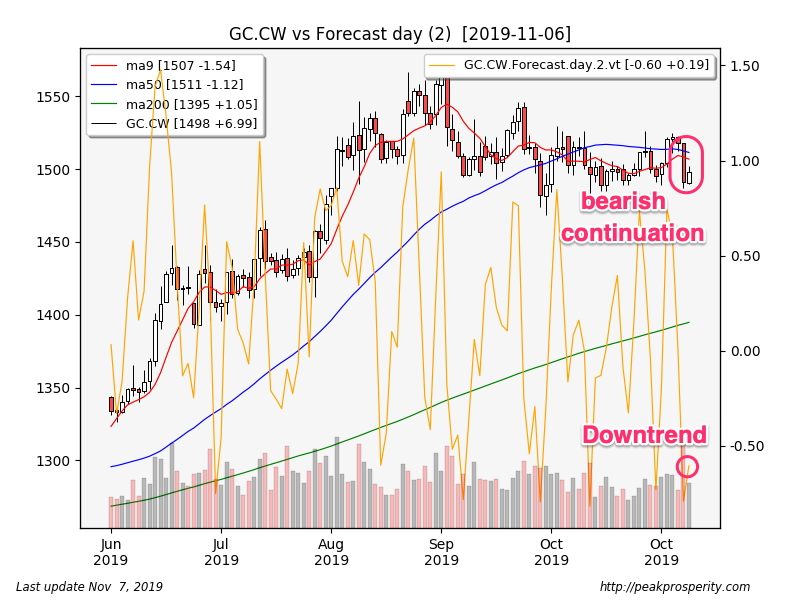 Silver didn’t look nearly as strong as gold, plunging to a new low of 17.36 before bouncing back by end of day. The takuri line candle was a bearish continuation, and while forecaster did move higher, it remains in a downtrend. Silver remains in an uptrend in both weekly and monthly timeframes. 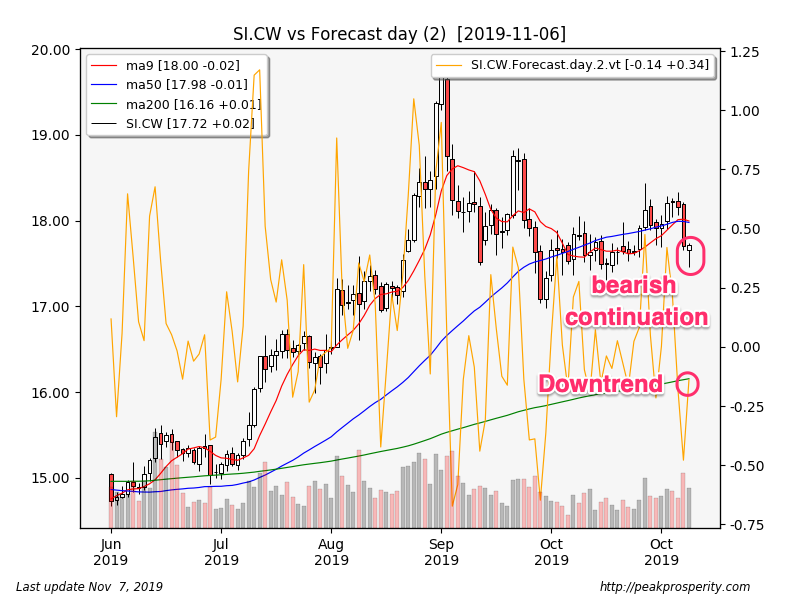 Miners rebounded today, with GDX up +1.22% on moderately heavy volume, while GDXJ rose +1.43% on light volume. XAU rose +0.80%, the spinning top candle was a bearish continuation, and forecaster fell, pushing XAU into a slight downtrend. XAU remain in an uptrend in both weekly and monthly timeframes. 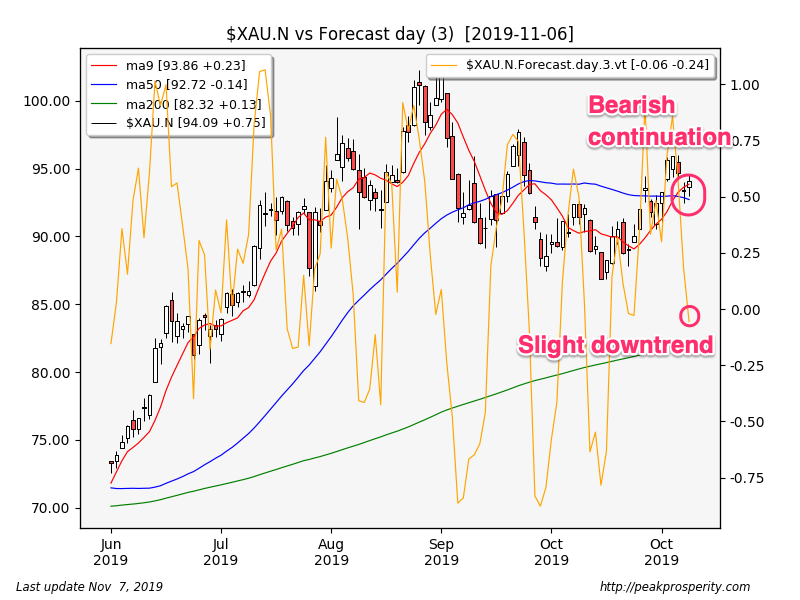 The buck fell -0.05 [-0.05%] to 97.52. The bearish harami cross was actually a bullish continuation, and forecaster moved higher into its uptrend. The buck remains in an uptrend in the daily and monthly timeframes.

Crude fell -0.92 [-1.61%] to 56.36. A reasonably strong intraday rally was cut short by a bearish-looking EIA report. The long black candle was a bullish continuation, and while forecaster fell, it was not enough to move crude into a downtrend. Crude remains in an uptrend in all 3 timeframes.

SPX rose +2.16 [+0.07%] to 3076.78. The short white candle was a bullish continuation, and forecaster inched lower but remains in a reasonably strong uptrend. SPX remains in an uptrend in all 3 timeframes.

JNK fell -0.16%, the long black candle was a bearish continuation, and forecaster dropped back into a downtrend. JNK is hinting at risk off right now. BAA.AAA differential was unchanged at +88 bp. Credit concern remains modest at best.

Copper gave back much of yesterday’s rally; its that pesky trade deal again. SPX doesn’t look as though it is impressed one way or the other, while junky debt continues to sell off.  There may be a message that the crappy debt market is trying to tell us; JNK may have formed a lower high, and while SPX is at new all time highs, JNK continues to move lower.  That’s not a good sign for risk assets longer term.  At the same time, gold’s bounce was a bit feeble – more than a bit feeble.  It does not look like a low.

After market close, in Asia trading, an article came out overnight that suggested the US had agreed to a tariff rollback in phases as progress is made on the agreement. This doesn’t sound too horrible, although it caused gold to sell off once again.