Gold’s long black candle was bearish; in fact, it was a swing high. Gold fell below the 9 MA, and forecaster issued a tentative sell signal, dropping -0.19 to 0.0. Weekly forecaster also issued a sell signal too; this drops gold into a downtrend in all 3 timeframes. Gold/Euros also issued sell signals on the daily and weekly timeframes. This chorus of unhappy technical news for gold is suggesting that we may have a trend change ahead of us for gold. 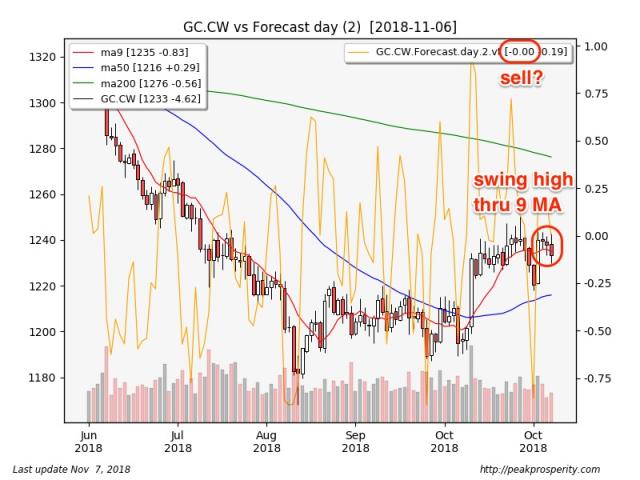 Silver’s long black candle was a bearish continuation; silver forecaster fell -0.09 to -0.16; that’s a mild downtrend. Silver came to rest right at its 50 MA. Silver remains in a downtrend in both daily and monthly timeframes.

The gold/silver ratio rose +0.32 to 84.36. That’s bearish, but the current level for the ratio suggests PM could be at or near a long term low. 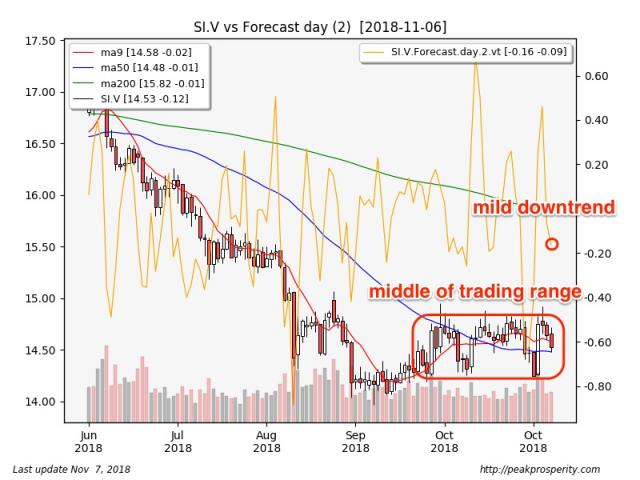 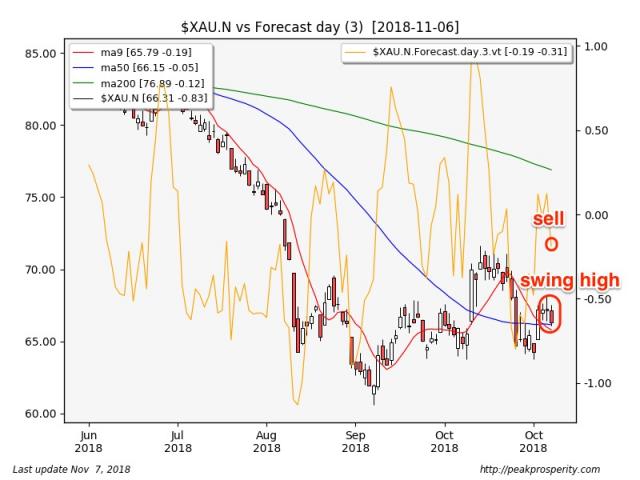 Platinum rose +0.50%, palladium plunged -1.64%, while copper dropped -0.67%. Platinum is actually looking relatively strong – especially compared to gold and silver. It is up $120 from the lows set back in August. Today was a new high for this cycle for platinum. Palladium is also doing well, down a few bucks from the all time high. Why is platinum rallying and gold is not? That I don’t know.

Crude fell -0.81 [-1.29%] to 61.98, making yet another new low. Once again, it tried to rally, but failed. Crude is paying no attention to that COT report suggesting most of the spec longs have been rinsed out. The long black candle was a bearish continuation, but forecaster moved up +0.14 to -0.19. I don’t know what happy thing it saw; crude sure didn’t look very good to me. Crude remains in a downtrend in all timeframes. The API report didn’t help; it was bearish (crude: +7.8m, gasoline: -1.2m, distillates: -3.6m) which was responsible for about 30 cents of today’s move down.

Sector map showed materials in the lead (XLB:+1.64%) with discretionary trailing (XLY:+0.44%). There were no losers today. The map was just somewhat bullish; financials and tech were just so-so today.

JNK rallied +0.20%, finally able to break out of its recent trading range. JNK is in a short-term uptrend, and the move today may be starting to signal a bit more enthusiastic return to risk.

CRB fell -0.71%; the modest bounce from last week’s brief enthusiasm over the possibility of a settlement in the US-China tariff situation has now passed. All 5 sectors fell, led by livestock (-1.28%).

Gold, silver, and the miners are showing early signs of tipping over. While they all remain well above their recent lows and they remain within their recent trading ranges, both gold and silver are now back below the 9 MA, which is the first sign of trouble. Miners too are hinting at possible trouble ahead. My sense is that the bid for gold in Europe has faded somewhat. This goes along with a rally in the Euro over the past 4 days. We’ll see how long that lasts.

Risk-on does seem to be returning; equities made new highs, and JNK managed to rise above its recent trading range. Bonds support this by threatening to make new lows; it looks as though the 10-year yield of 3.25% won’t hold for too much longer. My favorite risk-on currency pair, AUD/USD, rallied sharply over the last 4 days, after being mired in a downtrend for months. At least for the AUD traders, there still appears to be hope that the US-China tariff issue will be resolved relatively soon.

At the time of this writing, it appears that Republicans will gain 3 in the Senate, and the Democrats will gain 33 in the House. So far, the market reaction has been muted. This makes sense, because the outcome is roughly in line with expectations – perhaps a bit better for Republicans in the Senate than expected.

How will China interpret these results? Trump more or less made the election a referendum on him. In the Senate, that worked out all right, in the House, less so. My guess: China will try and settle now rather than holding out for 2020. Trump does not look as though he is on the way out the door. The gains in the Senate saw to that. Will it be a meaningful deal, or another fig-leaf proposal? That’s harder to know.  We will just have to wait and see how that G-20 meeting turns out.