Market-moving news: China is demanding that the US roll back all of its tariffs before they will sign the pork-and-soybeans trade deal. If Trump says yes to this, it is because he must really want this deal badly. Is the US getting something other than just ag buys by a China that happens to need ag products right now?

Gold fell off a cliff just before 7 am, and didn’t stop dropping until early afternoon. The opening black marubozu was a bearish continuation, and forecaster cratered, and is now in a very strong downtrend. Today’s plunge pulled all 3 forecasters into downtrends.  Gold really needs to avoid making a new closing low (roughly 1482).

Futures are projecting a 5% chance of a rate cut in December. 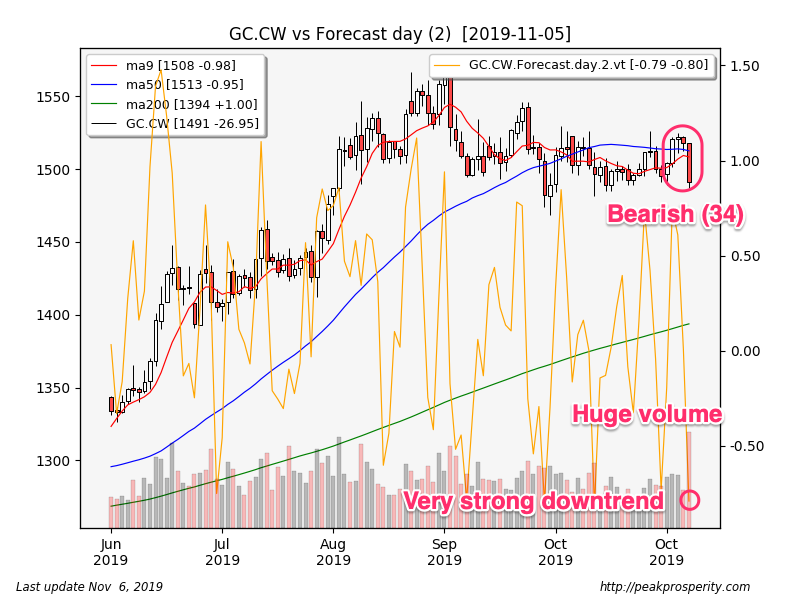 Silver basically followed gold downhill. The swing high candle was bearish (50%) and forecaster dropped into a strong downtrend. Today’s drop dragged weekly forecaster into a downtrend too, leaving silver in a downtrend in both daily and weekly timeframes. 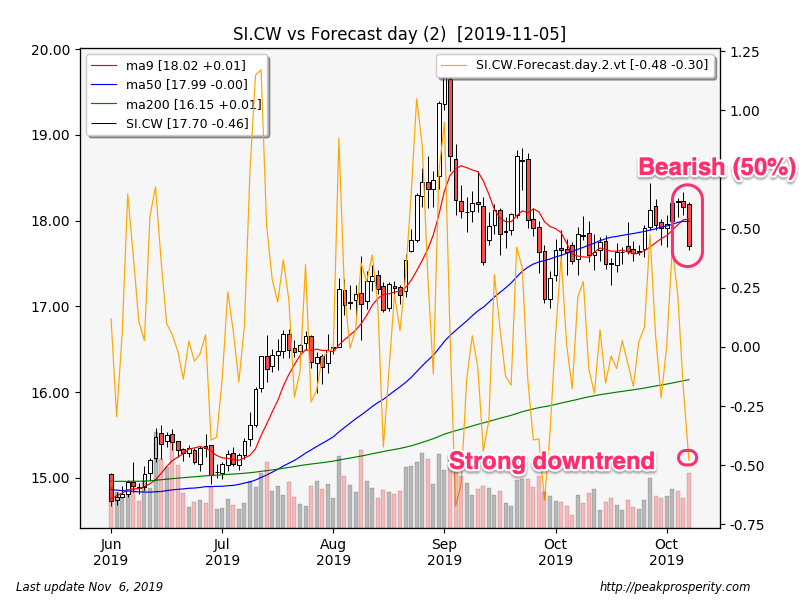 Miners gapped down at the open, and chopped sideways for most of the day. GDX dropped -2.00% on heavy volume, and GDXJ fell -2.66% on moderate volume. XAU lost just -1.38%, the swing high candle was bearish (50%) and forecaster moved lower, but remains in an uptrend. Surprisingly, XAU remains in an uptrend in all 3 timeframes.  XAU also remains above that 50 MA, which is a positive sign. Given the near-collapse in gold prices today, for XAU to do this well is nearly unthinkable. 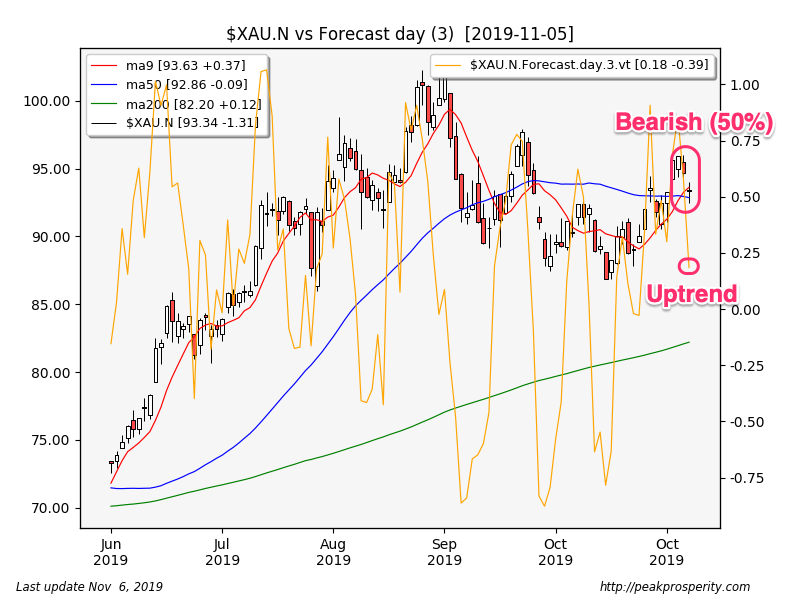 The buck rallied +0.44 [+0.45%] to 97.57. The strong line candle was a bullish continuation, and forecaster jumped into a reasonably strong uptrend. The buck is now in an uptrend in the daily and monthly timeframes.

Crude rallied +0.71 [+1.26%] to 57.28. The long white candle was a bullish continuation, and forecaster inched higher into its reasonably strong uptrend. This marked a new 2-month closing high for crude. Crude remains in an uptrend in all 3 timeframes.

SPX fell -3.65 [-0.12%] to 3074.62. The swing high print was a bullish continuation, and forecaster moved lower but remains in a reasonably strong uptrend. SPX remains in an uptrend in all 3 timeframes. It looks as though SPX has any US-China trade deal priced in already.

JNK fell -0.08%, the spinning top candle was a bullish continuation, and forecaster inched lower and is sitting right at the zero bound (no trend). BAA.AAA differential rose +1 bp to +88 bp. Credit concern remains modest at best.

Gold’s cratering today, alongside a strong rally in copper, suggests that today’s new was a surprise. Hints that all tariffs might be removed in exchange for a very basic trade deal was not something the market expected. Gold and silver have dropped back into downtrends, and bonds are threatening to break out to new lows.

Still, the mining shares are hanging tough. At least for now anyways. They do tend to lead, and the strong bid underneath the miners is definitely a positive sign.

It will be interesting to see what sort of “trade deal” Trump lands after all this sturm und drang with China over the past few years.  As of right now, I have to say, it isn’t looking all that promising.