Gold rallied for most of the day, ending near the highs. The bullish engulfing pattern was bullish (39%) and forecaster  jumped higher, but remains in a slight downtrend. Gold remains in a downtrend in all 3 timeframes, although both daily and weekly forecasters are on the edge of a bullish reversal. Gold/Euros looks roughly the same.

Futures are now projecting a 5% chance of a rate increase in December. 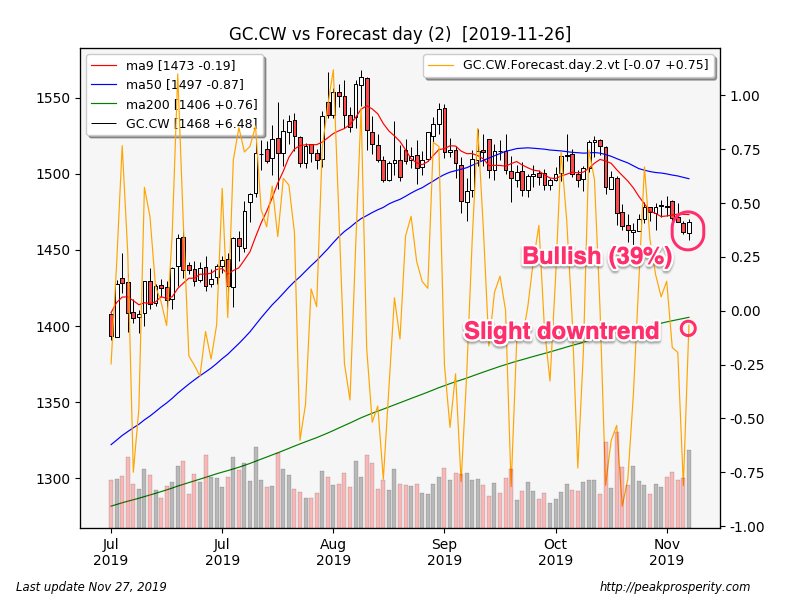 Silver also rallied for most of the day, ending near the highs. The opening white marubozu candle was bullish (47%), but forecaster moved lower, into what is now a modest downtrend. Silver remains in an uptrend in both weekly and monthly timeframes. Silver continues to look substantially stronger than gold. 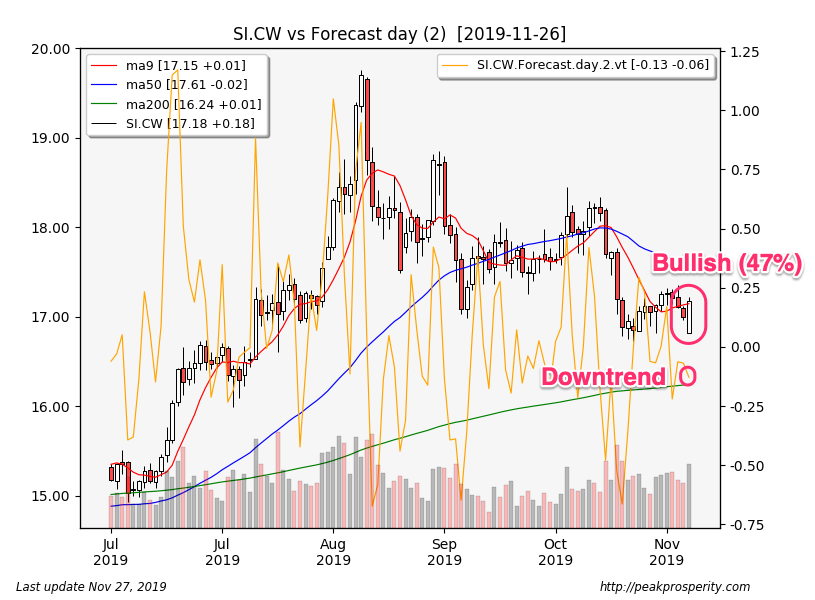 Miners rallied for most of the day, closing at the highs. GDX climbed +2.21% on heavy volume, while GDXJ jumped +3.06% on moderately heavy volume. XAU rose +1.99%, the closing white marubozu was fairly bullish (39%), and while forecaster moved higher, it remains in a downtrend. XAU remains in an uptrend in both weekly and monthly timeframes.  Note that XAU is now back above all 3 moving averages, which is a positive sign. 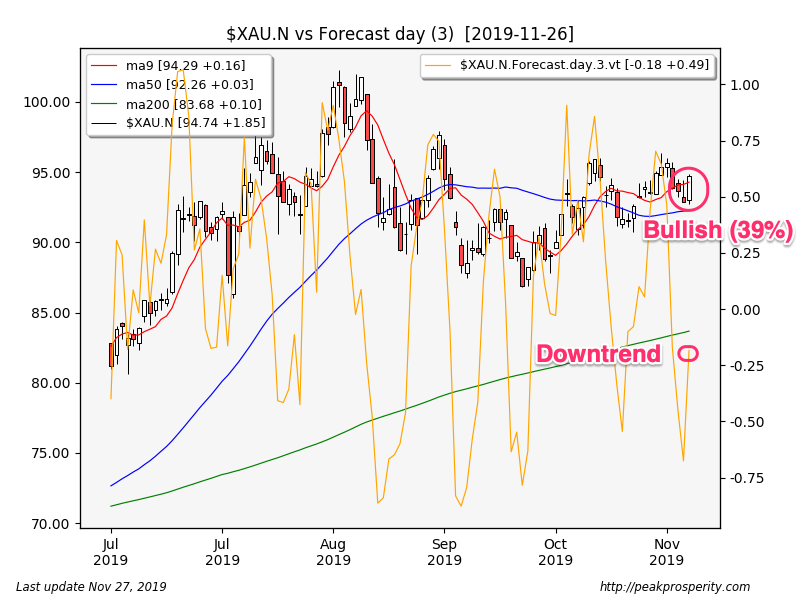 Platinum climbed +1.24%, palladium rallied +0.79%, and copper jumped +1.23%. Palladium missed a new all time closing high by 10 cents today. The copper rally suggests some optimism regarding the US-China trade deal, which we are informed – much like Godot – will not be coming today, but will surely arrive tomorrow.

The buck fell -0.07 [-0.07%] to 97.81. The short black candle is a bullish continuation, and forecaster edged lower but remains in a strong uptrend. The buck remains in an uptrend in the daily and monthly timeframes, and the weekly is looking as though it might reverse up soon also.

Crude rose +0.41 [+0.71%] to 58.24. The short white candle was a bullish continuation, and while forecaster moved lower, it remains in an uptrend. Crude remains in an uptrend in all 3 timeframes, as today’s rally pulled the weekly back (just barely) into positive territory.

JNK rallied +0.16%, which makes 3 strong days in a row for JNK. The closing white marubozu was a bullish continuation, and forecaster remains in a slight uptrend. BAA.AAA differential +2 bp to +90 bp. No worries about credit according to this indicator.

So bonds, gold, and equities rose today. That sure sounds like the result of a lot of new money looking for a home.

From the PM group perspective, it looks as though the contract-expiration-driven selling in gold and silver may be reversing. Today’s rally in the miners looked very strong; there is a pattern of higher lows and higher highs in place, and we may see a breakout to a new high within the next day or so. XAU is above all 3 moving averages – it is leading silver, which in turn is leading gold. That’s all pretty bullish.

I guess my advice would be: pay attention to the miners.  They tend to lead.

quick test message as posting wasn’t working for me yesterday

Edit: sure is today! (didn’t see a captcha though Dave so something does seem to have changed)