Gold just chopped sideways in a fairly narrow range today. The doji candle was unrated, forecaster climbed, but remains in a downtrend. Gold is in a downtrend in all three timeframes.

Gold/euros fell -4.37 [-0.29%] to 1521.90 on moderately heavy volume. The southern doji candle was a bearish continuation, forecaster climbed, but remains in a downtrend. Gold/euros is in a downtrend in both the daily and weekly timeframes.

Not much happened in the gold market today. There was a fair amount of short-covering, and we saw some contracts standing for delivery as we near month end, but the deliveries seemed light to me. As a basis for comparison, a big delivery month was May [34k], and July [33k]. The declining dollar didn’t seem to help gold. 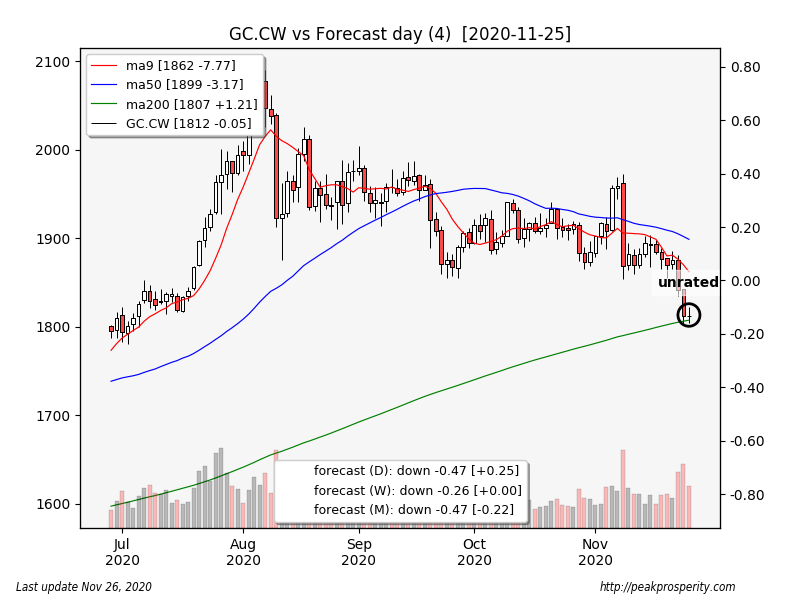 Silver chopped sideways with a slight positive bias, but it traded in a very narrow range. The short white candle was unrated, forecaster climbed, but remains in a downtrend. Silver is in a downtrend in both the daily and weekly timeframes.

While the price for silver didn’t move much, the short-covering was quite substantial. Virtually nobody stood for delivery, but the short-covering as we approach end of month looks quite bullish. In short – mixed signals in silver today. Is it a low? Maybe. 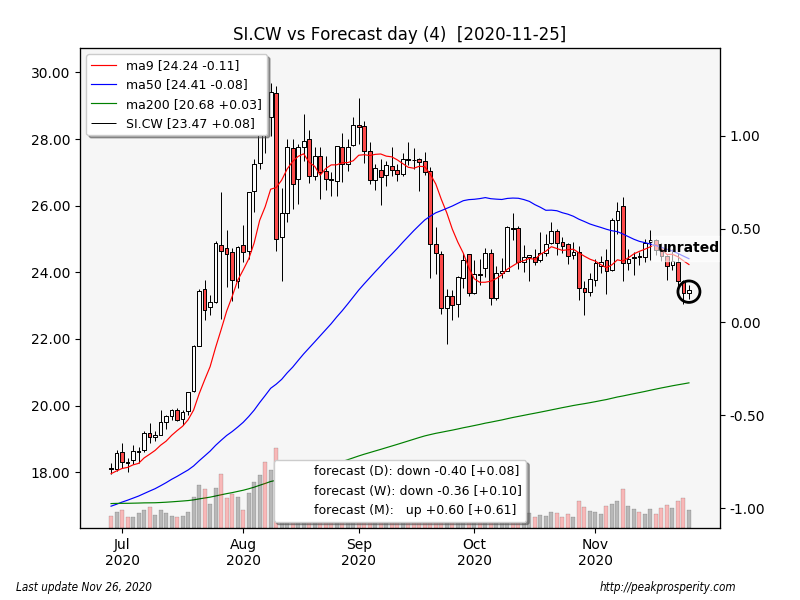 Miners gapped up at the open, rallied in the first hour, fell for much of the rest of the day, and then finally rallying again into the close. GDX climbed +1.86% on moderately heavy volume, and GDXJ rallied +2.14% on moderate volume. XAU rose +1.67%, the swing low candle was a likely bullish reversal (61%), forecaster climbed, rising into an uptrend. XAU is in an uptrend in the daily timeframe.

The swing low print was very highly rated, forecaster moved back into an uptrend – this all looks reasonably positive. While the individual candles might have been stronger, it does seem as though the miners may have put in a low. 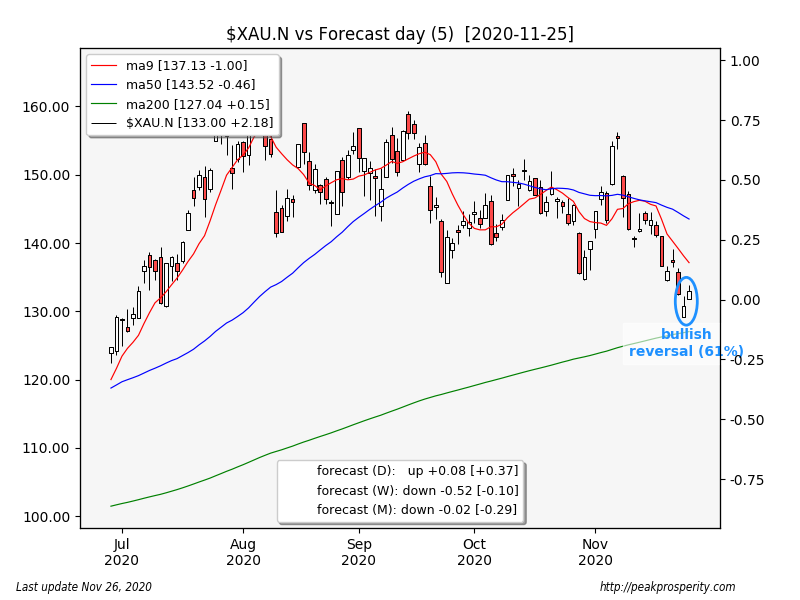 Copper inched up +0.01 [+0.30%] to 3.32 on moderate volume. The bearish doji star candle was a low-percentage bearish reversal (27%), forecaster dropped, but remains in an uptrend. Copper is in an uptrend in all three timeframes.

Copper really didn’t do much today at all – although it was another 5-year high. 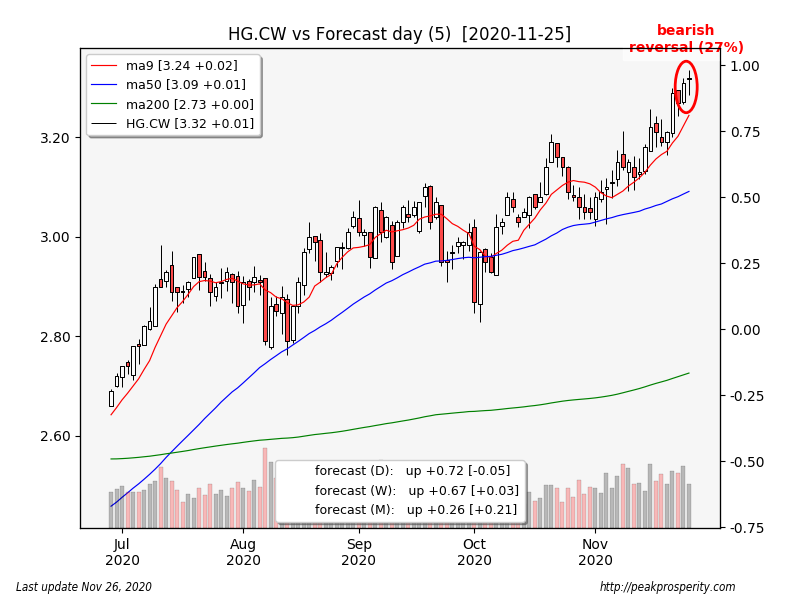 The buck dropped -0.26 [-0.28%] to 91.91 on moderate volume. The short black candle was a bearish continuation, forecaster climbed, but remains in a downtrend. The buck is in a downtrend in both the daily and weekly timeframes.

The buck broke to a new 3-month low today; the move didn’t seem to help gold at all. It looks like the dollar is slowly turning into confetti. Does this portend the parade of Biden-horribles? MMT-funded UBI? An MMT-funded $10 trillion dollar “green new deal”? Are we going to own nothing, and be happy? 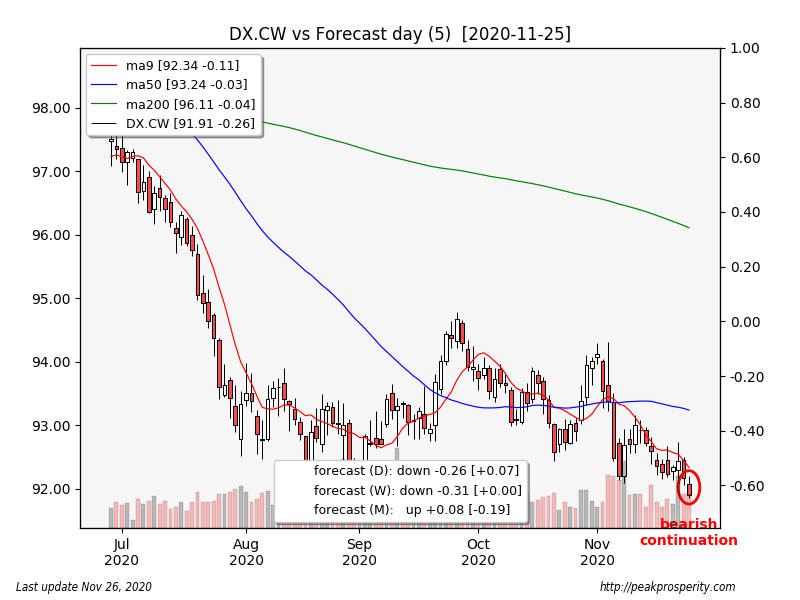 Crude shot up +1.05 [+2.34%] to 45.90 on moderately heavy volume. The opening white marubozu candle was a bullish continuation, forecaster dropped, but remains in an uptrend. Crude is in an uptrend in all three timeframes.

The EIA report didn’t seem to move prices much. Crude broke out to a new 9-month high (46.26) before retreating a bit into the close. Last time we saw these prices was February-March. Crude RSI7=84, which is overbought. I expect crude will start to get a little bit tired soon, even though the tea leaves aren’t suggesting it yet. 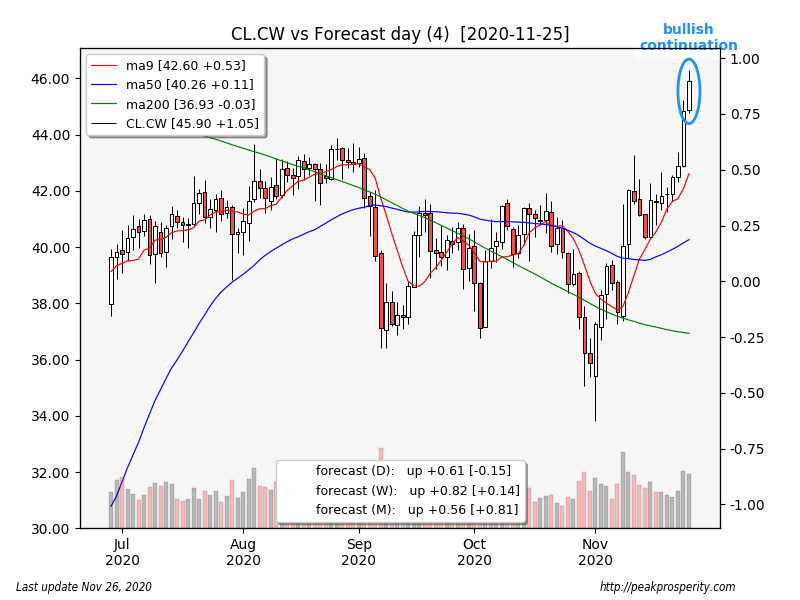 SPX dropped -5.76 [-0.16%] to 3629.65 on moderate volume. The spinning top candle was unrated, forecaster climbed, moving higher into its uptrend. SPX is in an uptrend in all three timeframes.

Equities went nowhere today – even energy sold off hard in spite of the crude rally. This also suggests crude may be at a near-term high. 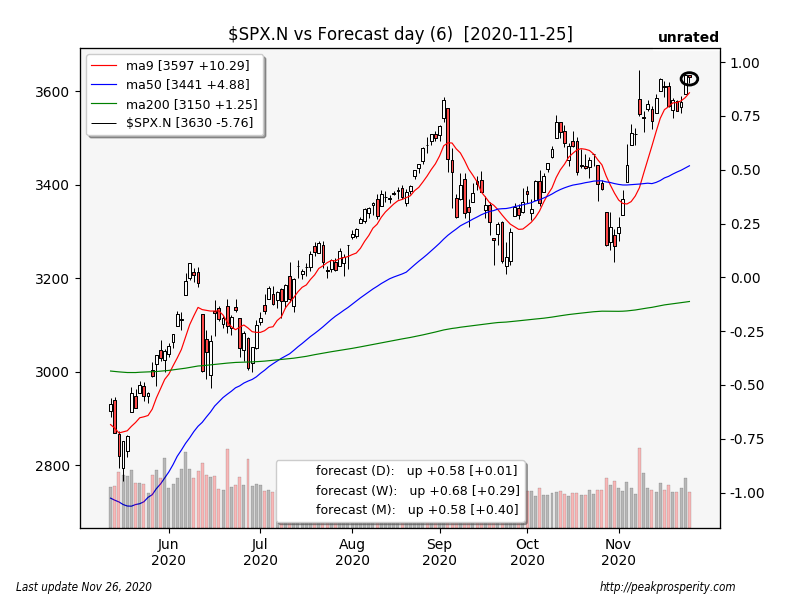 TLT fell -0.31%. The long black candle was a bearish continuation, forecaster climbed, but remains in a downtrend. TLT is in a downtrend in both the daily and weekly timeframes. The 30-Year yield rose +3.0 bp to +1.63%.

TY inched down -0.01%. The doji candle was neutral, forecaster dropped, moving deeper into its downtrend. TY is in a downtrend in all three timeframes. The 10-Year yield was unchanged at +0.0 bp to +0.88%.

Bonds edged lower – but really not much changed.

JNK inched down -0.01%. The spinning top candle was unrated, forecaster climbed, moving higher into its uptrend. JNK is in an uptrend in the daily and weekly timeframes. 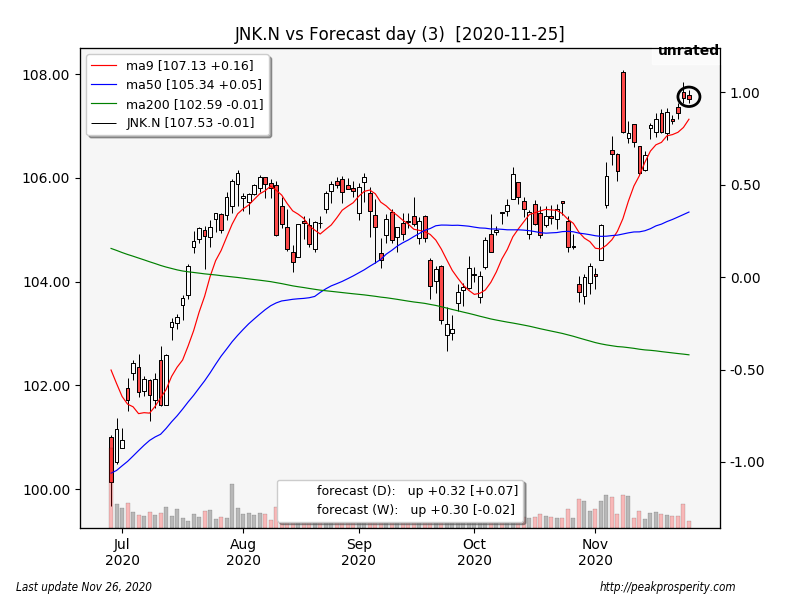 The GLD ETF tonnage on hand dropped -4.96 tons, with 1195 tons remaining in inventory.

Gold and silver mostly went nowhere, while the miners appear to have put in a bullish reversal. If the miners lead, then the metals should eventually follow suit. While the reversal doesn’t look all that exciting to me, my code seems to be more optimistic. The substantial short-covering in silver that happened today was also a positive sign.

The buck broke down to a new 3-month low today; it is nearing the low from early September. All the selling pressure on EUR/USD from expected negative lockdown effects may be nearing an end, now that positive tests have peaked across the pond. In fact, they largely peaked 3 weeks ago, and the buck has been declining ever since.

Risk assets mostly went nowhere; only crude rallied, but it did score a new 9-month high, and is now back in the mid-40s. A new model I’m working on for crude (paint still drying) suggests this might be an interim high.

For those interested in seeing how close the US is to its Shale Production Götterdämmerung, predicted by Art Berman several months back – so far, production is down -2 mbpd from peak (13.1 mbpd), ending last week at 11 mbpd. Production has been chopping sideways since June. The decline appears to have been arrested well short of the 6 mbpd target. Will this continue? I will keep you updated. 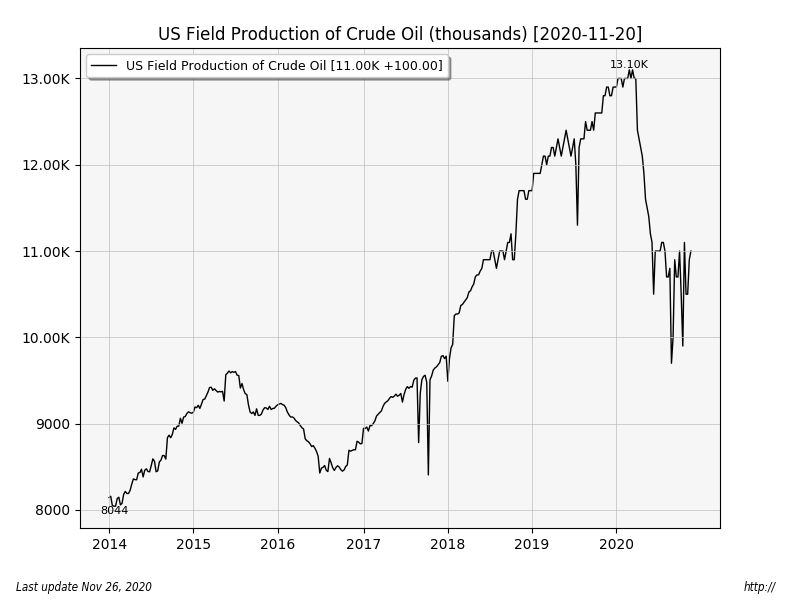 Tomorrow is a holiday – my favorite holiday – Thanksgiving. I have yet to decolonize myself, I guess.

I wish you all the best. 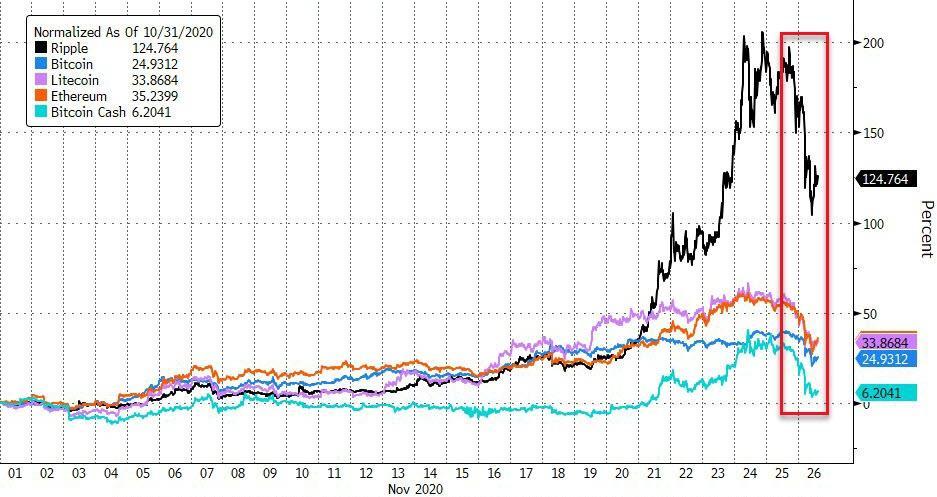 Those who believe that BTC and the Cryptos are the up and coming wave of the future will find this a good day to invest.

Here’s another theory on the crash:

Is it another scorched (bitcoin) earth shenanigan?  Better move everything over to a passphrase protested hardware wallet.

Nice find skipr, that may well have been the trigger as anything that reduces the (ease of) privacy of holding bitcoin will affect demand. Bitcoin was obviously due a correction though, as several have mentioned here before. I’m not a technical chartist but isn’t it highly risky to expect this -10% move to be it for now? It’s also happening at around the same $20k level that is bicoins all time high. I’d feel a lot less risk buying bitcoin after a correction to around $12k, isn’t that the only chart support it has historically?

Well my code was wrong yesterday – could be wrong today too.

It says lower prices ahead.  Most timeframes agree – except the 1-day timeframe, which is uncertain.  I interpret this to mean we might get a 1-day bounce. 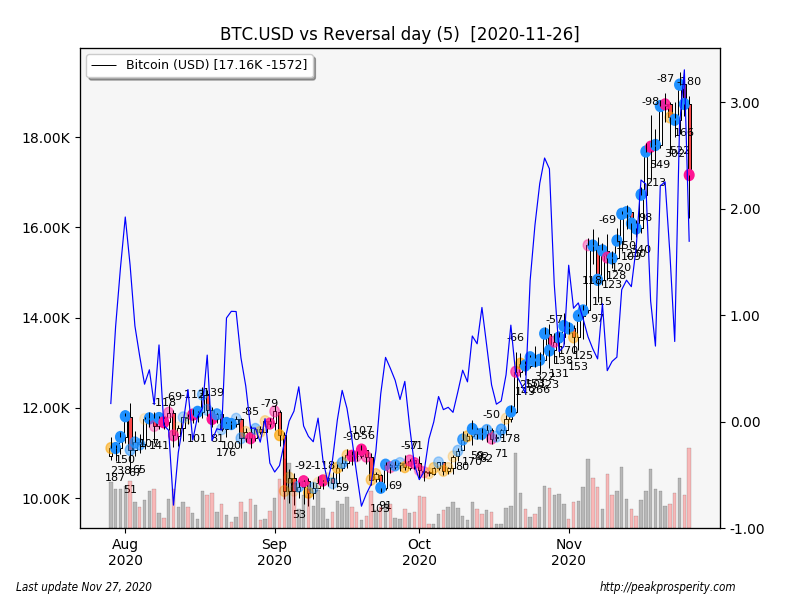 It’s unfortunate and common for traders and recent FOMO retailers. No problem for hodlers: dip purchases ahead! – certainly the whales and institutions will be buying once the action evens out some. (I’ll be among them, an over-sized minnow feeding with the whales.) Recent new hodlers have nothing to worry about.