Gold fell in Asia and London, bottomed out an hour after the open in New York, then chopped sideways into the close. The opening black marubozu candle was a low-percentage bullish reversal (26%), forecaster climbed, but remains in a downtrend. Gold is in a downtrend in all three timeframes.

Gold/euros fell -28.94 [-1.86%] to 1526.27 on extremely heavy volume. The long black candle was a bearish continuation, forecaster dropped, moving deeper into its downtrend. Gold/euros is in a downtrend in both the daily and weekly timeframes.

Gold has now completely retraced its July rally; it ended the day just above the 200 MA. There was a small amount of short-covering, the volume was very heavy, and the recovery at end of day was slight. RSI-7 for gold is 22, which is oversold. The candle print wasn’t very highly rated; this is probably not a low for gold today. 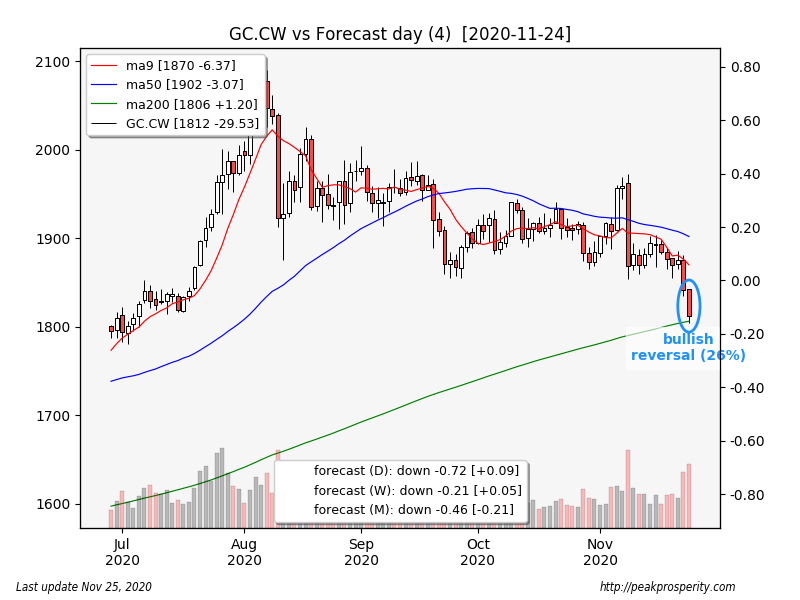 Silver fell in Asia and London, bottoming out at around 8:20 am, then managed to recover some of its losses by end of day. The opening black marubozu candle was a possible bullish reversal (38%), but forecaster dropped, moving deeper into its downtrend. Silver is in a downtrend in both the daily and weekly timeframes.

Silver is doing a lot better than gold; it remains well above the 200 MA, it has not yet made a new monthly low, the rebound at end of day looked much stronger than gold’s feeble bounce, and today’s candle print was a highly rated reversal bar – today could actually be a low for silver. 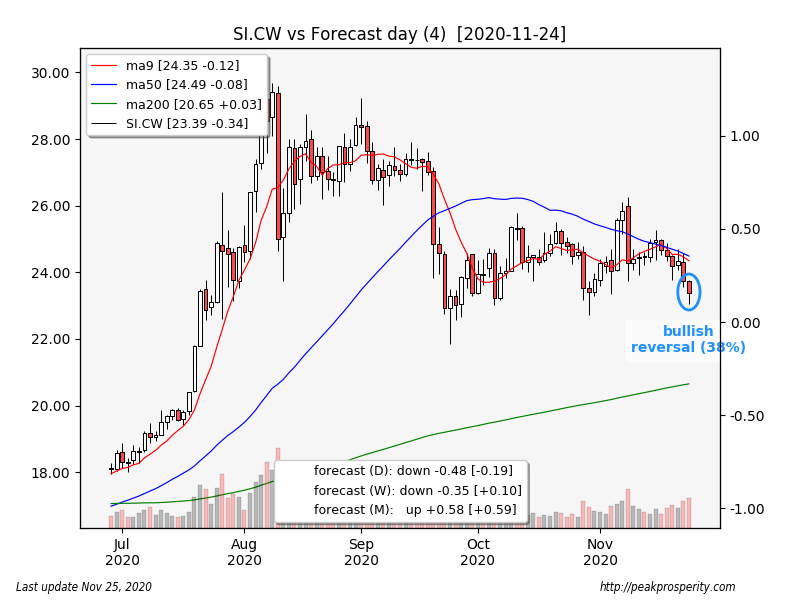 The miners gapped down hard at the open, tried to rally several times, but the rallies mostly failed. GDX dropped -2.74% on very heavy volume, and GDXJ plunged -2.95% on moderately heavy volume. XAU fell -1.30%, the opening white marubozu candle was a bearish continuation, forecaster climbed, but remains in a downtrend. XAU is in a downtrend in all three timeframes.

Like gold, the miners have mostly retraced their July rally at this point; XAU ended the day not far from the 200 MA. The candle print was not bullish, and the mostly-failed rally wasn’t confidence-inspiring. RSI-7 = 25, which is somewhat oversold. This is probably not a low for the miners. 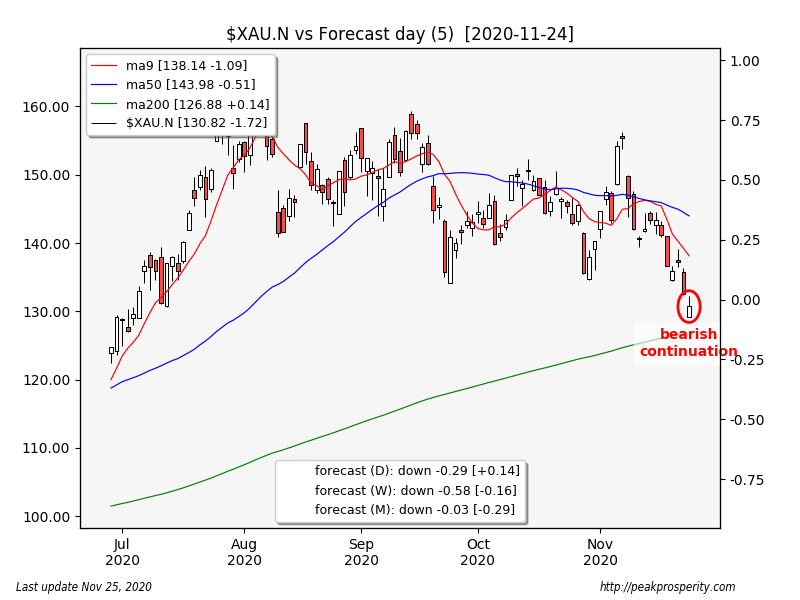 Copper rallied +0.04 [+1.22%] to 3.31 on heavy volume. The opening white marubozu candle was a bullish continuation, forecaster climbed, moving higher into its uptrend. Copper is in an uptrend in all three timeframes.

Today marked a new 6-year high for copper. That’s about all you need to know. My current thought is, someone may be stockpiling the metal. 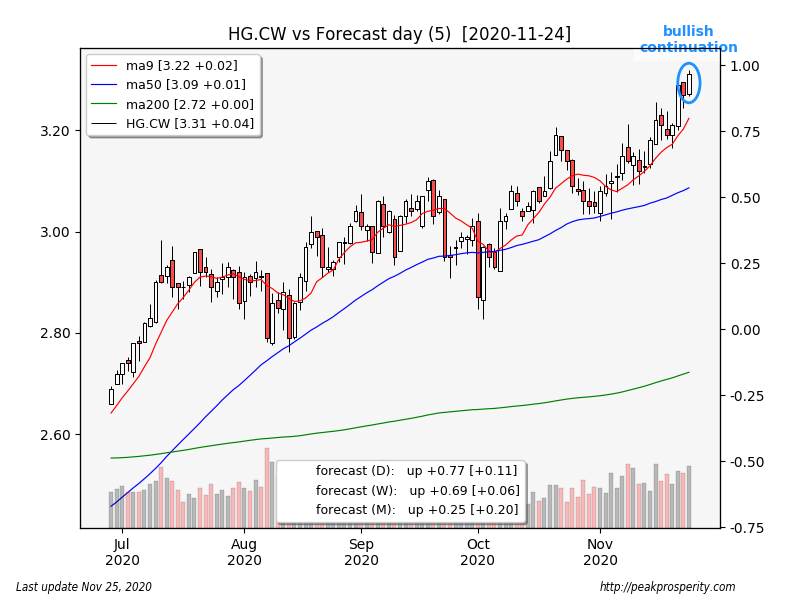 The buck fell -0.27 [-0.29%] to 92.17 on moderate volume. The bearish engulfing candle was a bullish continuation, forecaster dropped, moving deeper into its downtrend. The buck is in a downtrend in both the daily and weekly timeframes.

The buck fell in London, recovered, but then fell once more after the US opened, ending the day near the lows. The buck isn’t looking very good; it appears on the edge of a larger breakdown. The 9 MA is acting as resistance. I think we see lower prices for the buck ahead. 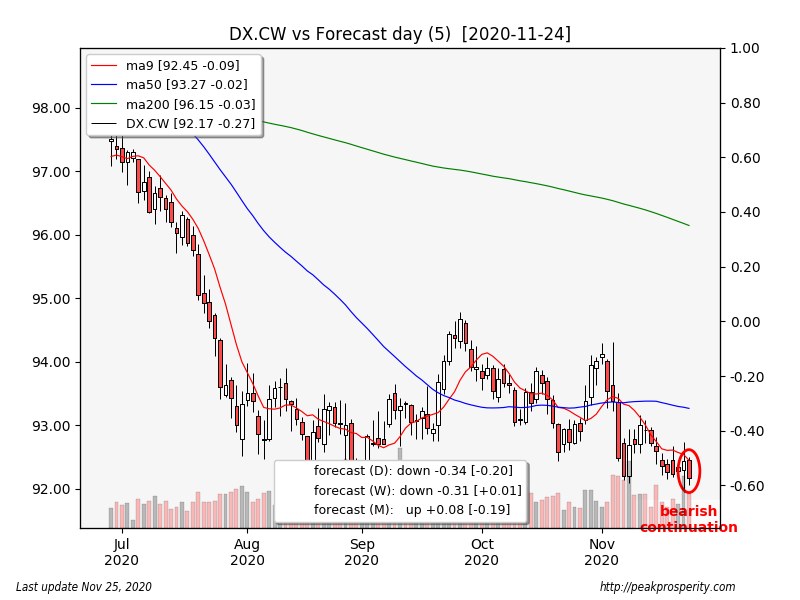 Crude screamed higher, up +1.98 [+4.62%] to 44.85 on heavy volume. The opening white marubozu candle was a bullish continuation, forecaster climbed, moving higher into its uptrend. Crude is in an uptrend in all three timeframes.

Crude rose to a 9-month high today, breaking above the previous high set back in late August. The break into the mid
-40s is a very bullish sign. 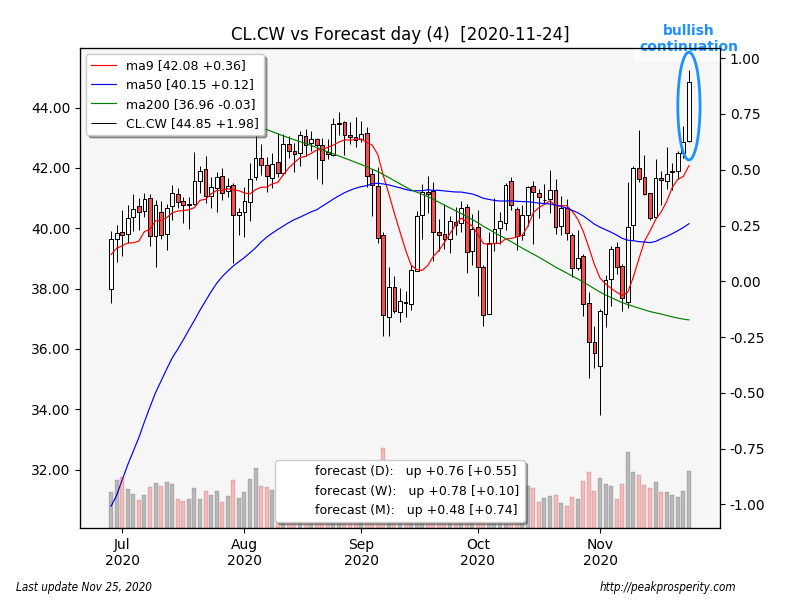 SPX rallied +57.82 [+1.62%] to 3635.41 on moderately heavy volume. The confirmed bullish spinning top candle was a probable bullish reversal (50%), forecaster climbed, moving higher into its uptrend. SPX is in an uptrend in all three timeframes.

Once again, energy equities led the market higher – along with the banksters. This roughly feels like a “return to normalcy” – whew, a vaccine – three vaccines! – will save us all. And maybe they’ll be mandated, assuming we want to actually fly on a plane. That, and Lockdown Europe seems to be improving. That’s my sense.

SPX made a new all time closing high today. 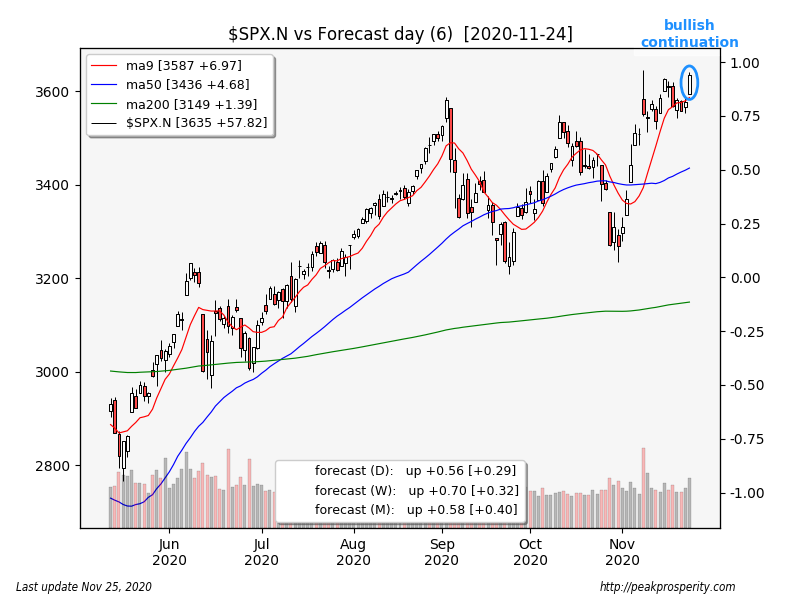 TLT fell -1.00%. The opening black marubozu candle was a bearish continuation, forecaster dropped, dropping into a downtrend. TLT is in an uptrend in the weekly timeframe. The 30-Year yield rose +5.0 bp to +1.61%.

TY fell -0.06%. The short black candle was a bearish continuation, forecaster fell, dropping into a downtrend. TY is in a downtrend in both the daily and monthly timeframes. The 10-Year yield rose +2.0 bp to +0.88%. 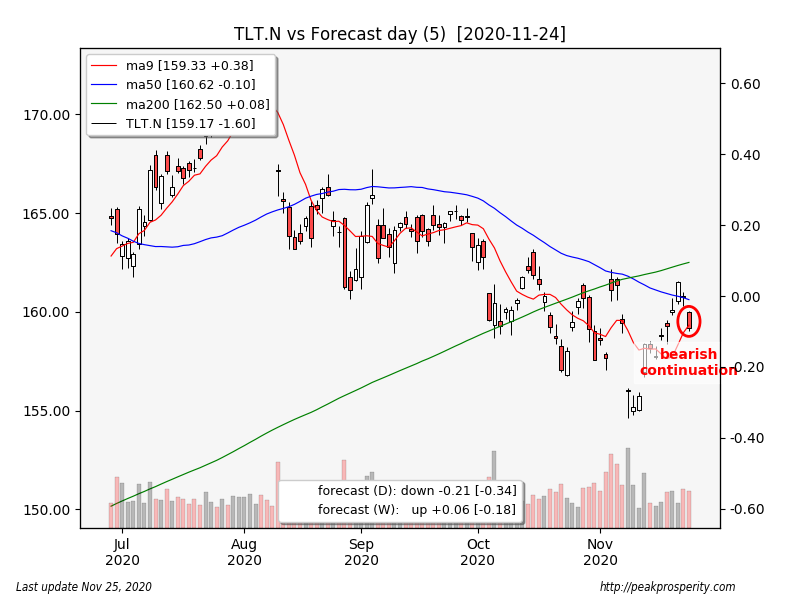 JNK climbed +0.26%. The long black candle was a bullish continuation, forecaster climbed, moving higher into its uptrend. JNK is in an uptrend in the daily and weekly timeframes.

Crappy debt is rallying too, but not as enthusiastically as SPX; there looked to be a fair amount of selling pressure today for crappy debt. It was a new 8-month closing high today. 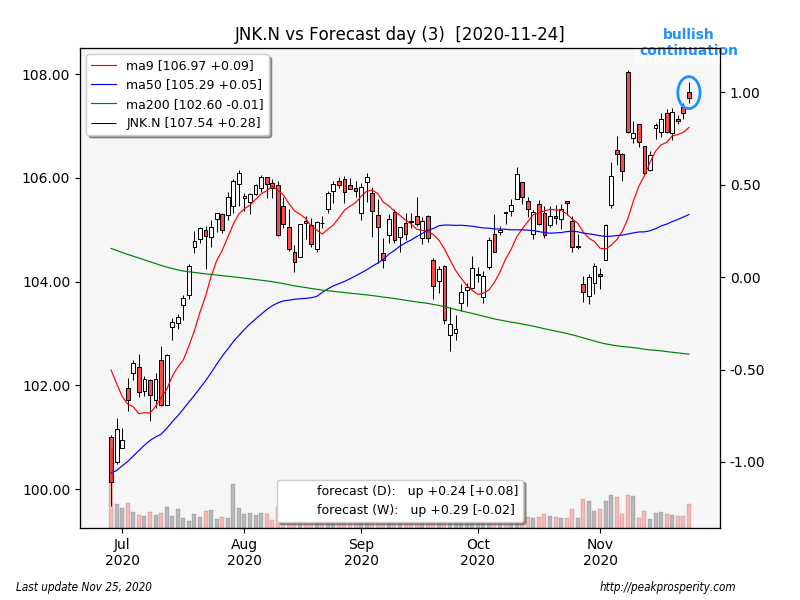 The GLD ETF tonnage on hand dropped -13.42 tons, with 1200 tons remaining in inventory.

Gold, silver, and the miners fell to new lows today; gold’s plunge stopped almost right at the 200 MA. The miners look just slightly better, while silver seems to be doing best – which is to say, its chart looks stronger, but still fairly bearish. For the most part, the PM group has retraced its big July rally.

How much of the risk asset rally is politics? How much is projected economic recovery? How much is all the happy news about the flock of vaccines on the way? It is hard to untangle. But the rally in crude and the airlines definitely suggests that an impending return to normalcy is the prevailing sentiment.

One minor note of optimism; you may have seen the “reversal” model I’ve been using to track bitcoin. I’ve been experimenting with the same codebase for gold, and it does suggest today is probably a near-term low – but only in the short term timeframe. It is unsure about the longer term.

Platinum is doing its own thing. It broke out to a new 2-month closing high today. Hmmm. Something to watch.

Today’s “difficulty” for the PM group has happened alongside a declining dollar; today’s move down for the buck didn’t seem to help PM at all. This tells you that gold/Euros is doing even worse than gold/USD – it certainly is.

Bonds sank – the 30-year fell most. The moves were not that dramatic given the large rally in equities.

How much of the risk asset rally is politics? How much is projected economic recovery? How much is all the happy news about the flock of vaccines on the way? It is hard to untangle. But the rally in crude and the airlines definitely suggests that an impending return to normalcy is the current prevailing sentiment.

Speaking of that – here’s a site which has all the vaccine candidates and their stage of development.

I am trying to forecast headline risk. The above site shows there are some 10 phase 3 trials, and 49 trials total of human testing on more than 350,000 people worldwide. The site also provides a thumbnail sketch about the different vaccine technologies – there are a lot them, with varying risk levels: protein subunits, virus-like particles, nucleic acid (DNA, MRNA), replicating viral vector, non-replicating viral vector, live attenuated virus, and inactivated virus.

I suspect we will get an avalanche of vaccine news over the next few months. I suspect it will mostly sound fantastic.

But if you dig deeper, you can find the truth hidden under the marketing, even at CNN:
https://www.cnn.com/2020/11/23/health/covid-vaccine-acip-meeting-discussion/index.html
Nurses were also a concern. One survey showed that while nurses agreed vaccines were likely to be safe and effective, only 34% would voluntarily get vaccinated, Oliver said.

And also:
https://khn.org/news/article/time-to-discuss-potentially-unpleasant-side-effects-of-covid-shots-scientists-say-yes/
“We are asking people to take a vaccine that is going to hurt,” said Dr. William Schaffner, a professor of preventive medicine and health policy at Vanderbilt University Medical Center. “There are lots of sore arms and substantial numbers of people who feel crummy, with headaches and muscle pain, for a day or two.”

“A lot of folks don’t have sick leave. A lot of our essential workers don’t have health insurance,” he said, suggesting that essential workers should be granted three days of paid leave after they’re vaccinated. “These are the things a well-functioning government should provide for to get our economy going again.”

And you get two shots, with the second being worse than the first. And this is just the near-term effects. We won’t know the long term side effects for – presumably – a long time, mainly because they haven’t been tested for a long time.

So vaccines, and impending headline risk. We are going to return to normal due to vaccines.

Which, they say, half of America doesn’t really want to take (along with 66% of nurses), but will – allegedly – be required by employers, schools, airlines, and theme parks.

We are moving into pandemic, phase 2. 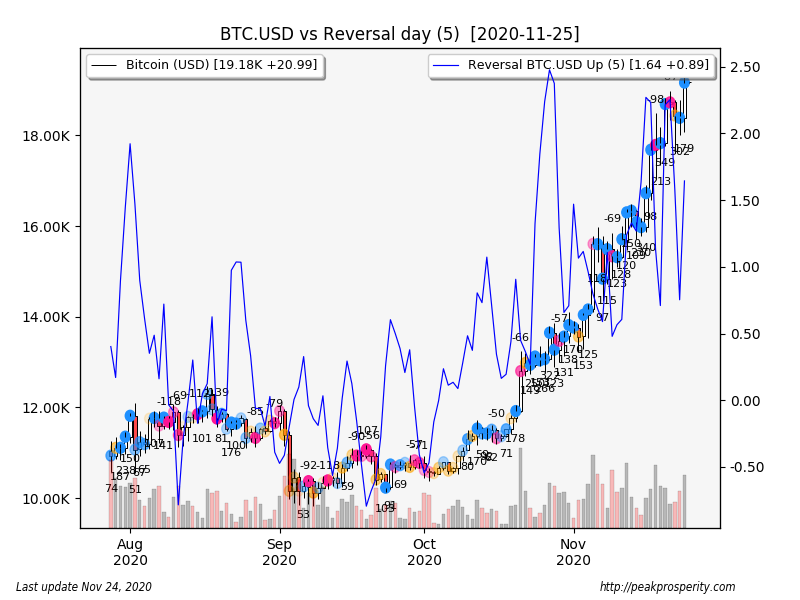