Today’s candle print for gold was a “high wave” and/or a “long legged doji”, neither of which suggest a change in trend. Once again, no swing low today. Gold remains in a downtrend, below all three moving averages, it has been chopping sideways for several days now, and still looking to mark a low. 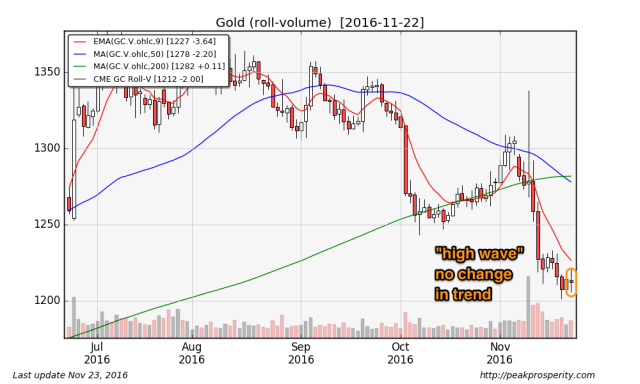 Silver tried to rally again today and failed; the candle print was a “high wave” which was mildly bearish (20% chance of a high here). While silver did manage to close in the green, today was all about a nice rally that ended up back almost flat when all was said and done. Traders don’t seem to want to take silver home overnight. At least not yet. Like gold, silver remains in a downtrend, below all three moving averages. 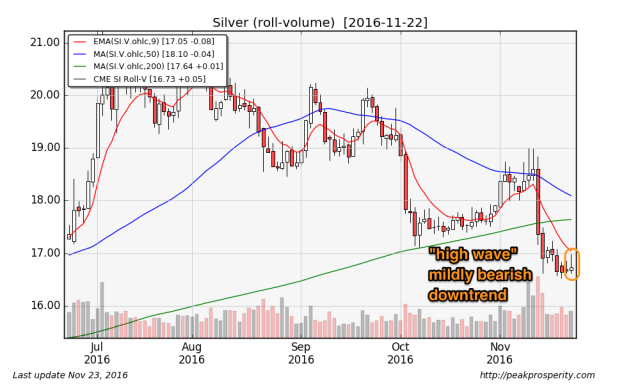 The miners sold off hard at the open but then rallied back along with gold to close up, with GDX climbing +0.37% on very light volume, and GDXJ up +1.39% on moderate volume. GDX printed its third doji candle in a row; three days of relative indecision. I think traders really do want to buy the dip, and GDX did have a swing low six days ago, but so far at least, gold is not cooperating and so mostly the miners are now just chopping sideways. GDX needs a close above the 9 EMA to really mark the start of a rally. 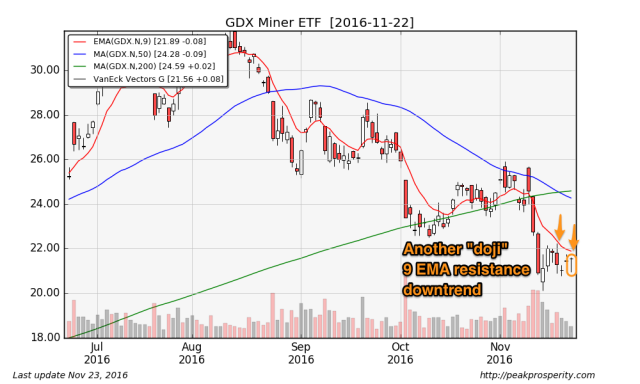 Platinum rose +0.02%, palladium climbed 2.5%, and copper rose +0.87%. Copper continues to move higher in spite of a huge increase in commercial short positions over the past few weeks. Both copper and palladium continue to do quite well.

The USD was hit with selling early but then rebounded, ending the day down just -0.01 to to 101.02. Candle print was a “long white” candle, which the candle code pegs as neither bullish nor bearish. The Euro is now chopping sideways, which is a lot better than the disagreeable plunge it had over the previous two weeks, but so far, no signs of recovery. The Yen continues to look weak. The way things work, traders will have to want to buy the Euro for the buck to reverse direction and so far, that’s not happening – and with the Italian banking crisis/referendum/Quitaly in the offing, the Euro just might not bounce very far.

Crude tried staging a rally today which failed, with crude closing unchanged at 47.90. The API report showed a very modest inventory draw of 140k barrels.  Candle print was a “spinning top” which the code tells us is nothing to worry about. There were a fair number of conflicting news stories about the upcoming OPEC meeting; one participant said “everyone was on board” while another said “it would be unfair to ask us to cut.” It is in everyone’s interest to come together, but it seems like a grand “herding cats” exercise, with perhaps a $10 move in oil – in either direction – hanging in the balance.

SPX rose +4.76 to 2202.94, which is yet another new all time high. Today it was consumer discretionary (XLY:+1.19%) leading, with sickcare (XLV:-1.44%) looking distinctly ill. The post-Trump election bloom is off the sickcare rose. Is it possible a President Trump won’t keep the gravy train flowing to the sickcare cartel? That’s what prices are suggesting; they’ve completely retraced their initial gains.  The banks have still held onto their big move higher.  New all time highs for DJIA and RUT as well.  New all time highs for DJIA and RUT also. VIX fell -0.01 to 12.41.

TLT fell -0.03%, more or less chopping sideways over the past week or so.  No buyers yet for bonds, but at least the selling seems to have stopped.

JNK had another great day, up +0.75%, managing to close back above its 50 MA. It has yet to erase the lower-highs lower-lows downtrend pattern, but just one more day like this and it will have done so. JNK continues to dramatically outperform IEF.

CRB moved up +0.14%; most sectors were unchanged except for the industrial metals, which had a strong day. Longer term, CRB is still consolidating above its 50 week moving average, which is ever so slowly starting to turn higher.

While the primary driver for gold’s daily price moves remains the dollar, looking at gold-in-Euros, we can see that gold is in a downtrend in Euros also. This is generally bearish, and so while a Euro rally might end up moving the price of gold higher, I’m not sure there are enough buyers in the west right now to move gold back into a more sustained uptrend.  We may be back to the situation where, at least in the west, “nobody cares” about gold.

Based on what I saw happening intraday, if the buck moves convincingly above its previous high at 101.54, gold probably ends up cracking 1200 support.

Hi Dave,  Do you know anything about a rumor that India is going to ban imports of gold?  Here is a recent article from MarketWatch about it.

Can you comment on this, please?  Thank you,  Jan