Gold moved lower for most of the day, closing near the lows. The swing high candle pattern was – surprisingly – a bullish continuation, but forecaster fell, dropping into a downtrend. Today’s move took gold below the 9 MA, which is a bearish sign. Gold is now in a downtrend in all 3 timeframes. Gold/Euros remains in more or less the same position.

Futures are now projecting a 5% chance of a rate increase in December. 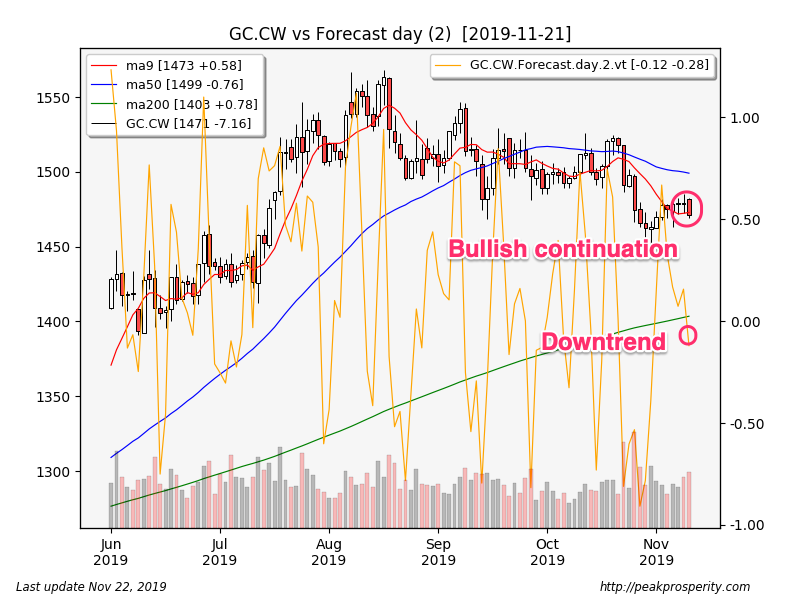 Silver chopped lower in a narrow range; the short black/NR7 candle was unrated, and the forecaster dropped into a downtrend. Unlike gold, silver remains above its 9 MA, and it also remains in an uptrend in both the weekly and monthly timeframes. 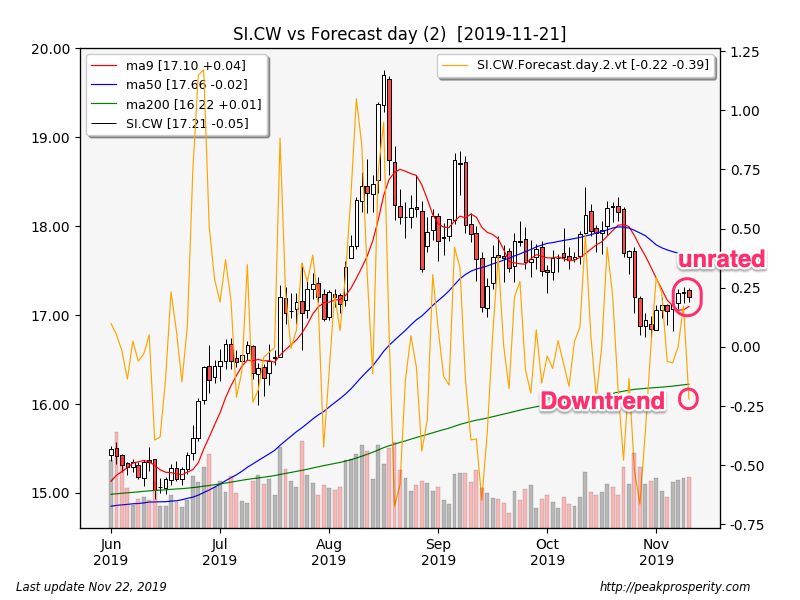 Miners fell all day long, closing at the lows. GDX dropped -1.90% on moderately heavy volume, while GDXJ fell -2.65% on moderate volume. XAU fell -1.91%, the closing black marubozu was a bearish continuation (and also a 3-candle swing high), and forecaster dropped into a downtrend. Today’s drop also pulled the weekly forecaster back into a downtrend as well, leaving the miners in a downtrend in both daily and weekly timeframes. 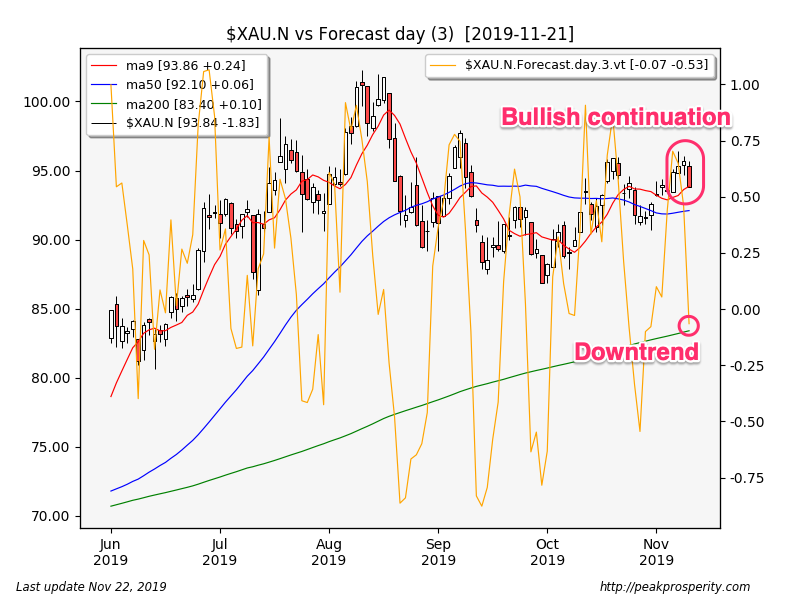 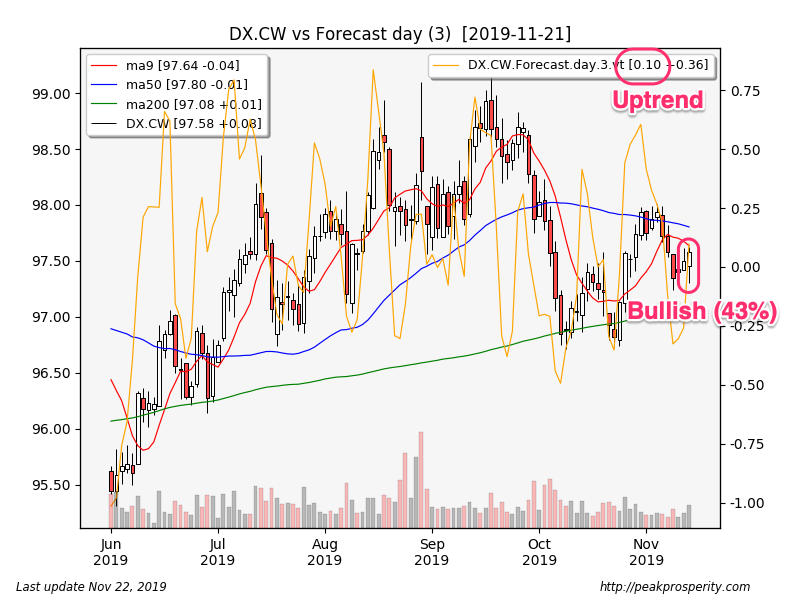 Crude rallied +1.22 [+2.14%] to 58.20, breaking out to a new multi-month high. The long white candle was a bullish continuation, and forecaster jumped higher into what is now a strong uptrend. Crude remains in an uptrend in all 3 timeframes.

The news that possibly caused today’s rally was that OPEC+ (OPEC + Russia) are leaning towards continuing the oil production cuts through June 2020, although that’s just my guess. 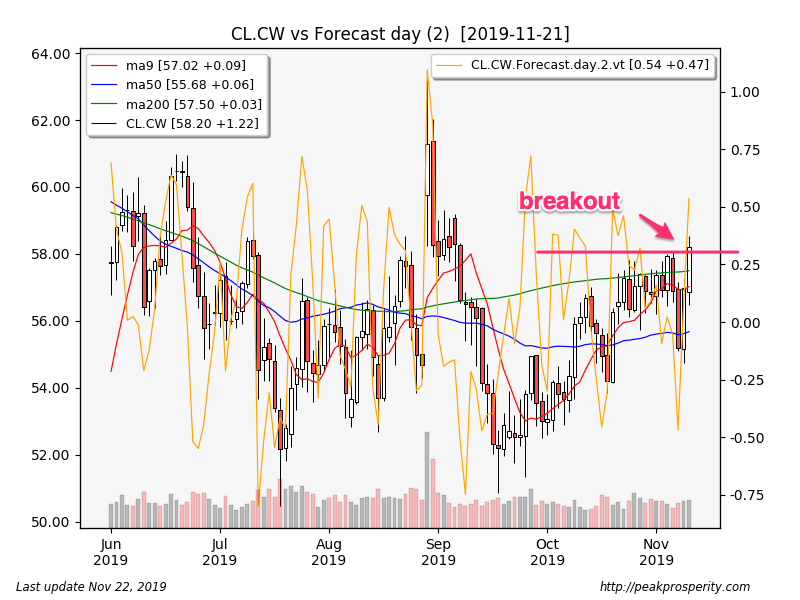 JNK was unchanged, although it made a new low today; the hammer candle was mildly bullish (32%), but forecaster fell, dropping deeper into a downtrend. BAA.AAA differential fell -2 bp to +0.86 bp. No worries about credit according to this indicator.

CRB rallied +0.99%, with only 1 sector rising, which was energy (+2.37%). Industrial metals made a new multi-month low. Note the bifurcation between the fading chances of the trade deal (leading to falling industrial metals prices), while oil prices are rising. This feels very bullish for crude.  I expected crude to sell off along with metals, but that just hasn’t happened.

China has reportedly invited US negotiators to return to Beijing for yet another round of negotiations. This for a deal which allegedly was agreed-to in principle more than a month ago. How long does China intend to string this process out? Answer: as long as humanly possible. It is clear (at least to me) that the CCP does not wish to make any material changes to the way they conduct business.