Gold tried to rally, then fell, then bounced back somewhat in a choppy trading day. The long legged doji was a bullish continuation, and forecaster moved higher into a modest uptrend. Gold remains in a downtrend in the weekly and monthly timeframes. Gold/Euros remains in more or less the same position.

Futures are now projecting a 4% chance of a rate increase in December.  Do you believe this will happen? 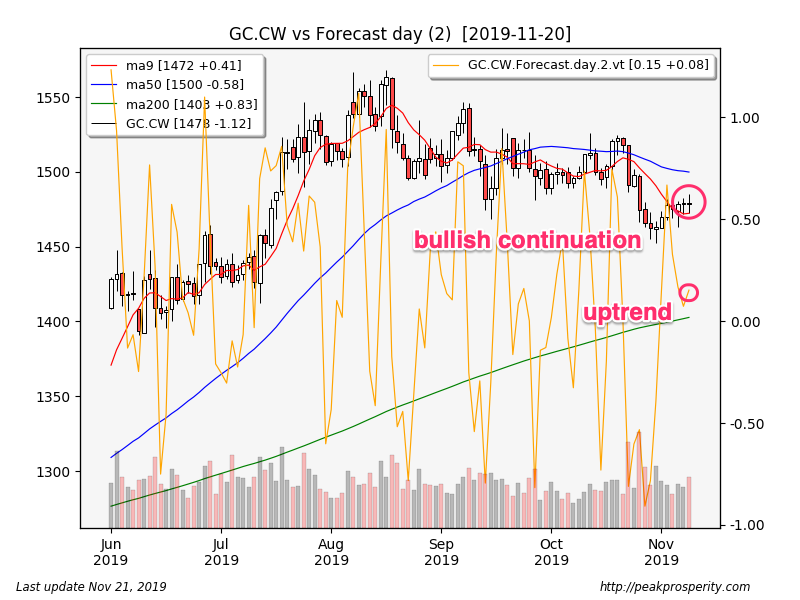 Silver chopped sideways too; the doji candle was a bullish continuation, and forecaster moved back into an uptrend. Silver is now back in an uptrend in all 3 timeframes. Curiously, volume over the last 3 days has been extremely heavy, which I take to be a positive sign. 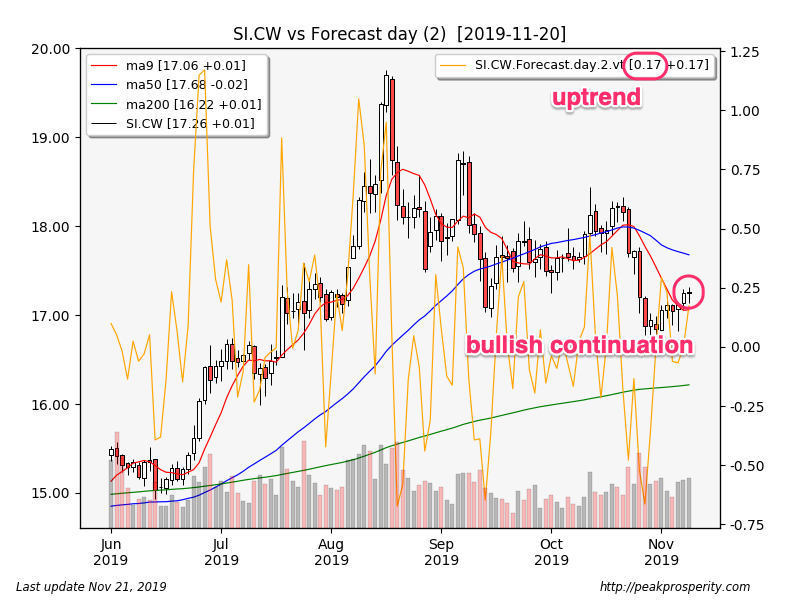 Miners rallied early, then fell, then rallied back into the close. GDX rose +0.40% on moderately light volume, while GDXJ climbed +0.93% on moderately light volume also. XAU rose +0.35%, the spinning top candle was a bullish continuation, and forecaster moved lower but remains in an uptrend. XAU appears ready to break out above the previous high set back in mid-October. XAU remains in an uptrend in all 3 timeframes. The miners remain the most bullish component in the PM sector. 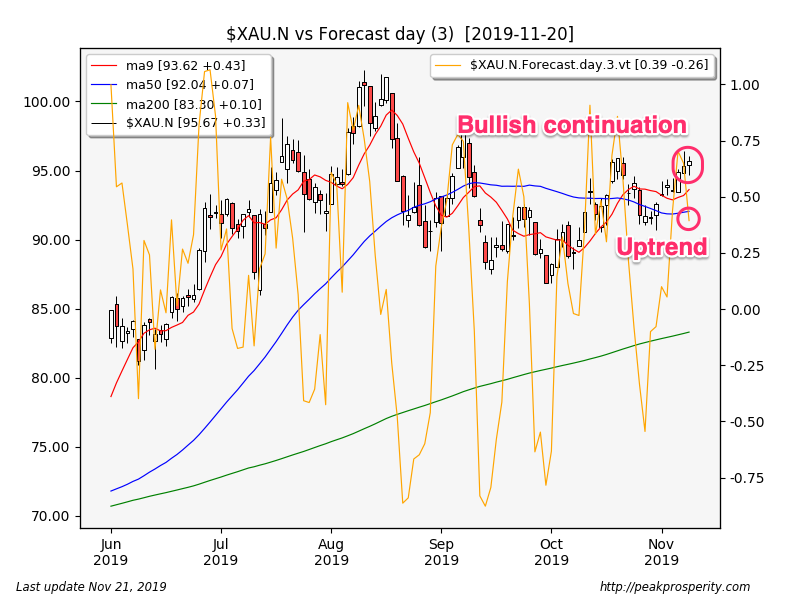 Platinum moved up +0.73%, palladium climbed +0.15%, and copper fell -0.30%. Platinum has rallied for 6 days in a row, although it remains well below its October highs. Still, platinum’s rally is a positive sign for PM in general.

Crude shot up +1.79 [+3.24%], completely erasing yesterday’s plunge. The bullish engulfing pattern was a bearish continuation, but forecaster shot back up into an uptrend. Today’s rally took crude right back above both the 9 and 50 MA lines, reversing yesterday’s big move down. The rally also pulled the weekly forecaster back into an uptrend too, which means crude is now back in an uptrend in all 3 timeframes. 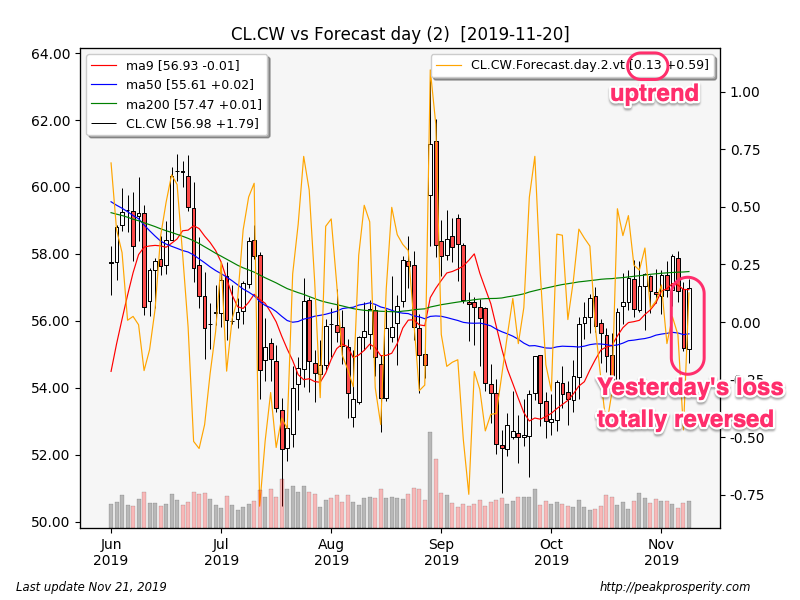 SPX fell -11.72 [-0.38%] to 3108.46. The swing high pattern was mildly bearish (40%), and forecaster moved lower but remains in an uptrend. SPX also remains above all 3 moving averages, as it has done since early October, but today’s intraday low would have taken SPX through the 9 MA, if not for an afternoon rebound into the close. SPX remains in an uptrend in all 3 timeframes.

JNK fell -0.16%, the long black candle was a bearish continuation, and forecaster moved lower into its moderate downtrend. This was a new multi-month low for JNK; the continuing decline in JNK has run counter to the series of new all time highs for SPX. I think something is afoot in the crappy debt market.  What is crappy debt trying to tell us?  BAA.AAA differential rose +1 bp to +0.88 bp. No worries about credit according to this indicator. 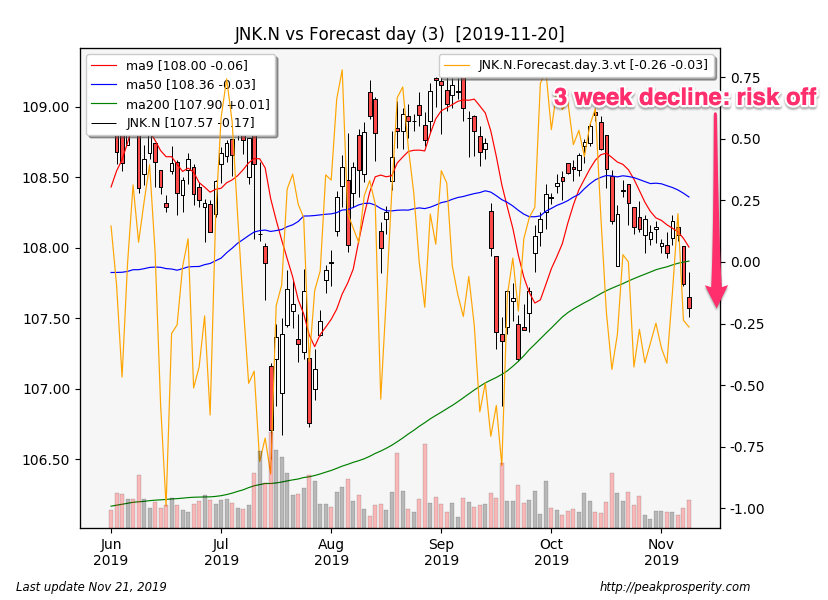 I see a slow building of risk-off sentiment.  JNK has been dropping for 3 weeks.  Gold, the miners, and bonds have been rallying now for two weeks.  And now even SPX – at long last – may be topping out.  Perhaps JNK is the “tell” – the coal mine canary.  That’s why I like to watch where it is going.  Slowly but surely, the possibility of a trade deal is fading, and the pressure to “do something” about Hong Kong is rising.

When asked about the US-China trade deal today, Trump said: “I don’t think they’re stepping up to the level that I want.” China wants tariff rollback in exchange for pork and soybeans, which it now seems, is just not going to happen. Next date to watch: Dec 15, when an increase in tariffs on $156 billion in Chinese imports is scheduled to take effect.

In a rare display of bipartisanship (usually only visible on matters such as Patriot Act warrant-less wiretap renewals, and defense appropriations), both House and Senate passed the Hong Kong Human Rights and Democracy Act, which requires the US government to confirm – annually – that Hong Kong remains “sufficiently autonomous” in order to retain its tariff-exempt status on exports to the US. The act also empowers the President to impose sanctions and travel restrictions on anyone found to be responsible for arbitrary detention, torture, forced confession of any individual in Hong Kong. Beijing immediately called it a “serious provocation against the entire Chinese People” and they vowed to retaliate.

Trump is expected to sign the bill.  It is starting to look as though events may be proceeding towards a more serious break of some sort with Beijing.