Gold chopped sideways in Asia, dipped in London, recovered, and then fell into the close in New York. The long black candle was a possible bullish reversal (35%), forecaster dropped, moving deeper into its downtrend. Gold is in a downtrend in all three timeframes.

Gold/euros dropped -8.16 [-0.51%] to 1580.81 on moderate volume. The long black candle was a possible bullish reversal (38%), forecaster climbed, but remains in a downtrend. Gold/euros is in a downtrend in all three timeframes.

There was some short-covering today, but not all that much. Gold/Euros ended the day below the 200 MA, which is bearish. While the candle print looks somewhat bullish, the overall picture for gold continues to become more bearish – all 3 timeframes now look relatively bearish. 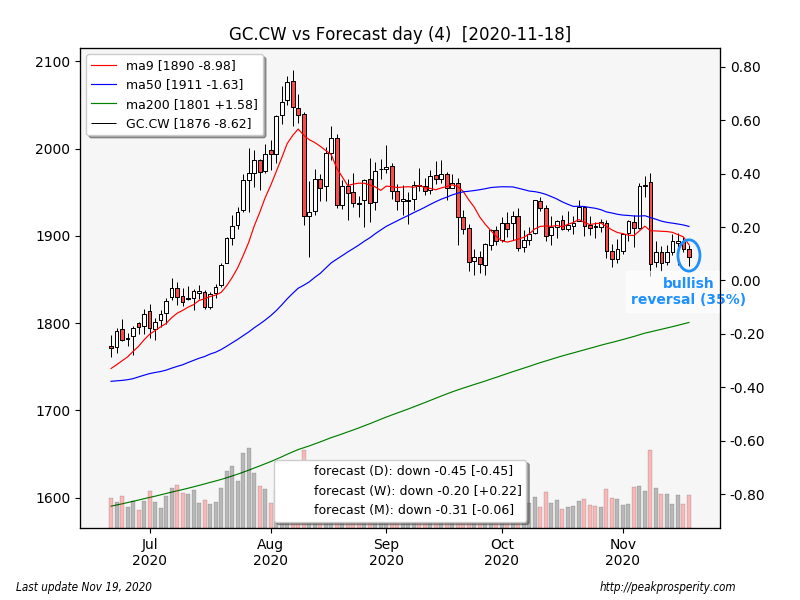 Sillver chopped sideways for much of the day, but ended up fading into the close. The short black candle was a bearish continuation, forecaster climbed, but remains in a downtrend. Silver is in a downtrend in both the daily and weekly timeframes.

There was a minor amount of short-covering in silver, but that’s the extent of the good news. Silver is now slowly moving lower. 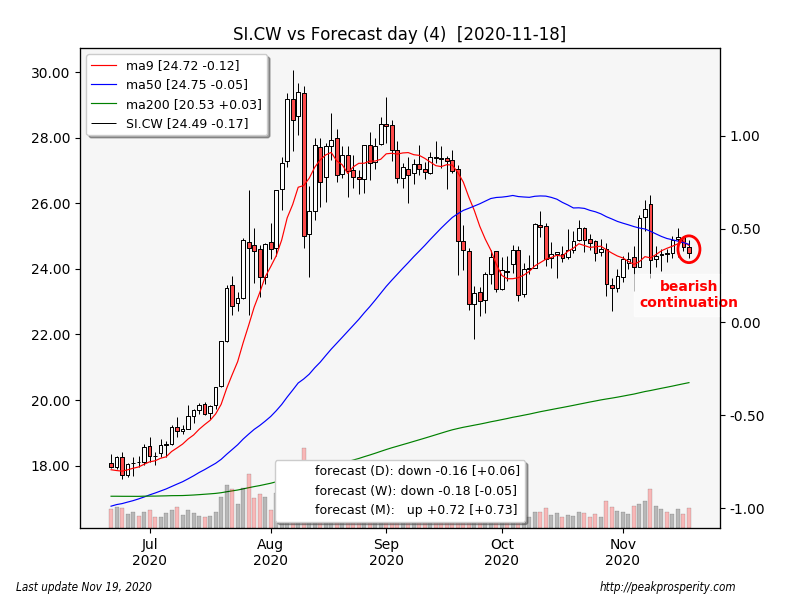 The miners sold off at the open, tried to rally after 30 minutes, but then sold off for the rest of the day, ending at the lows. GDX plunged -3.03% on moderately heavy volume, and GDXJ dropped -2.70% on moderate volume. XAU fell -3.21%, the black marubozu candle was a low-percentage bullish reversal (23%), forecaster dropped, moving deeper into its downtrend. XAU is in a downtrend in all three timeframes.

The miners looked terrible today. The medium term downtrend is accelerating. I’m not sure the previous low will hold. 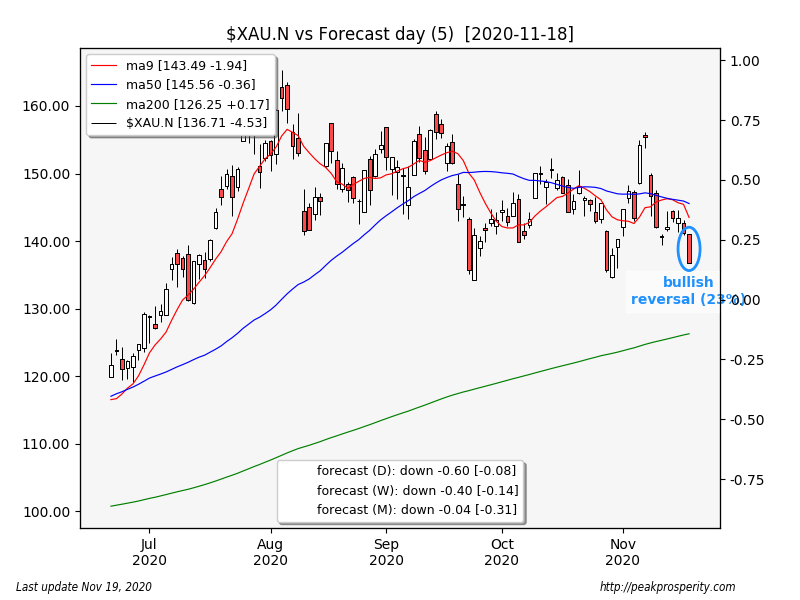 Copper fell -0.02 [-0.62%] to 3.19 on moderately heavy volume. The long black candle was unrated, forecaster dropped, but remains in an uptrend. Copper is in an uptrend in all three timeframes.

Today saw a failed rally for copper; it remains in an uptrend. 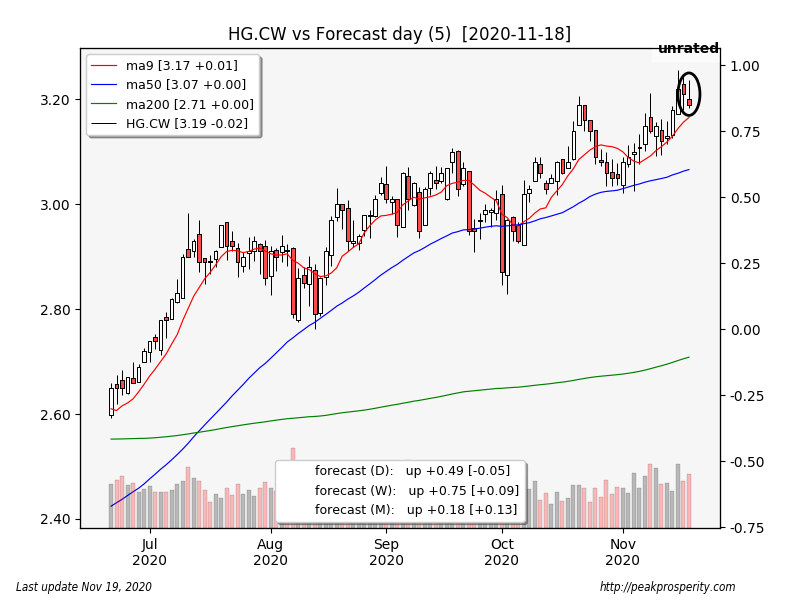 The buck fell -0.09 [-0.10%] to 92.27 on moderately light volume. The short black candle was a reasonably strong bullish reversal (40%), forecaster dropped, moving deeper into its downtrend. The buck is in a downtrend in both the daily and weekly timeframes.

The buck is right at support. If support fails, the selling could get pretty intense. The candle print was positive, but so far, the positive candle prints haven’t seemed to lead to any reversals. 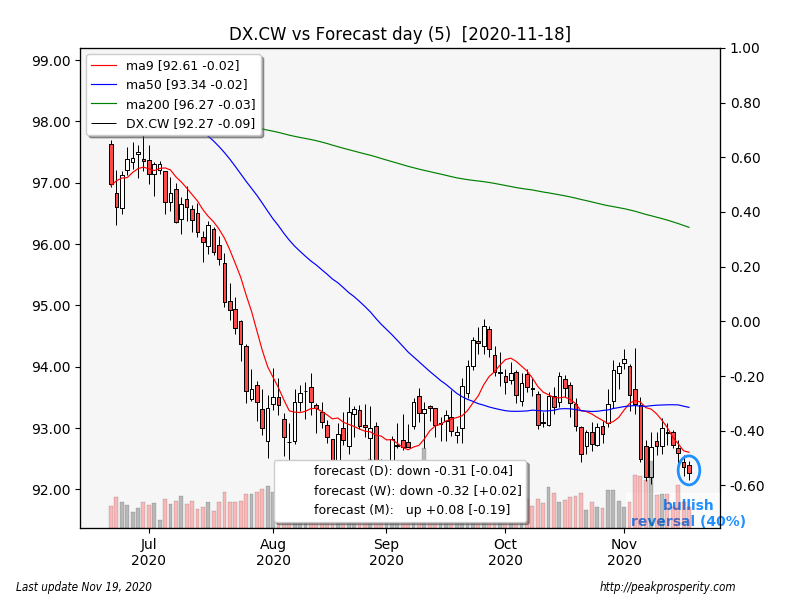 Crude climbed +0.20 [+0.48%] to 41.81 on moderate volume. The high wave candle was a possible bearish reversal (38%), forecaster climbed, moving higher into its uptrend. Crude is in an uptrend in all three timeframes.

Crude tried to rally today, but the rally mostlly failed. The resulting candle print was a fairly highly rated reversal. The EIA report pulled prices slightly lower, but it wasn’t the cause of the failed rally. Still, crude remains near its highs. 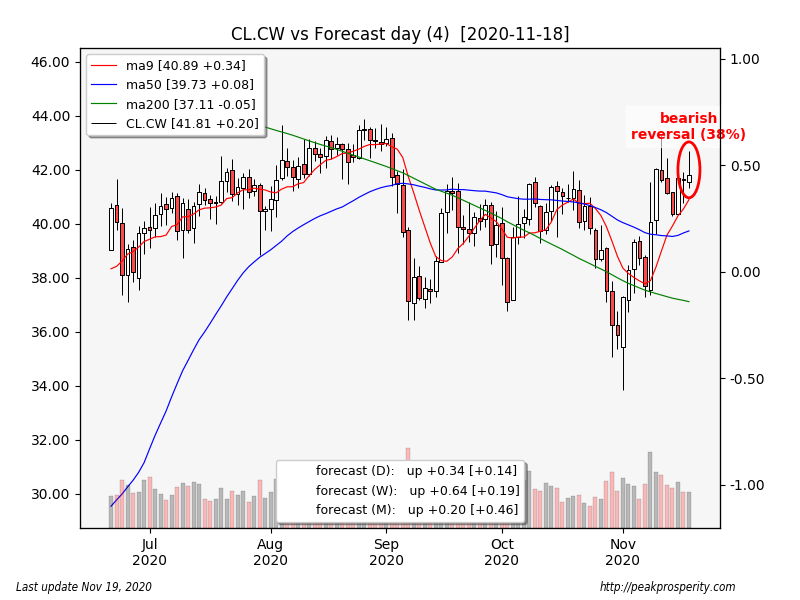 SPX fell -41.74 [-1.16%] to 3567.79 on moderate volume. The closing black marubozu candle was a bearish continuation, forecaster dropped, dropping into a downtrend. SPX is in an uptrend in the weekly and monthly timeframes.

All of the losses today took place in the last hour of trading – it was a very ugly close. That said, the sector map shows a pretty odd pattern for a bearish reversal. Forecaster is now in a downtrend, but SPX ended the day just above the 9 MA. Is this a top for SPX? Maybe. 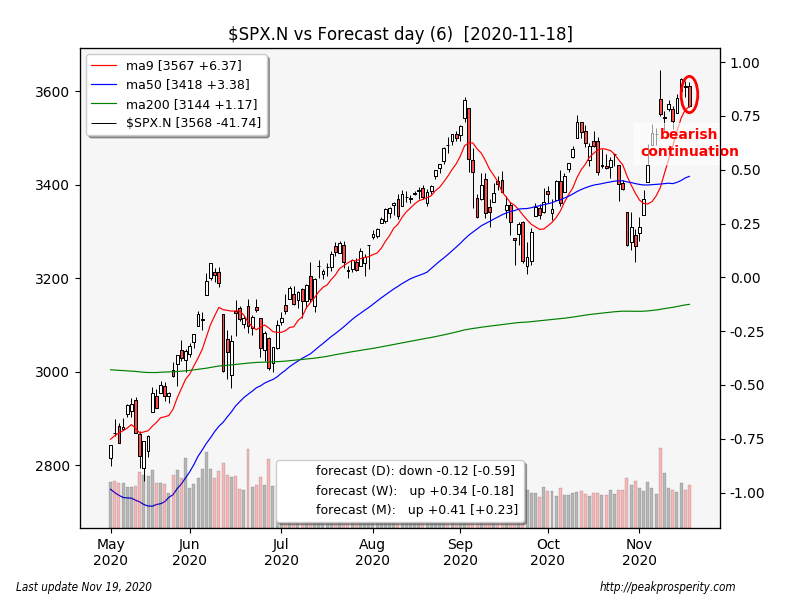 TLT climbed +0.29%. The high wave candle was a bullish continuation, forecaster climbed, moving higher into its uptrend. TLT is in an uptrend in the daily and weekly timeframes. The 30-Year yield fell -2.0 bp to +1.60%.

TY fell -0.09%. The long black candle was a bullish continuation, forecaster dropped, but remains in an uptrend. TY is in a downtrend in both the weekly and monthly timeframes. The 10-Year yield was unchanged at +0.0 bp to +0.87%.

Bonds were mixed today – they rallied as equities fell, but the move wasn’t all that strong.

JNK dropped -0.22%. The bearish engulfing candle was a bullish continuation, forecaster dropped, but remains in an uptrend. JNK is in an uptrend in the daily and weekly timeframes.

The candle print was weak – not a bearish reversal. Unlike equities, crappy debt remains in an uptrend. 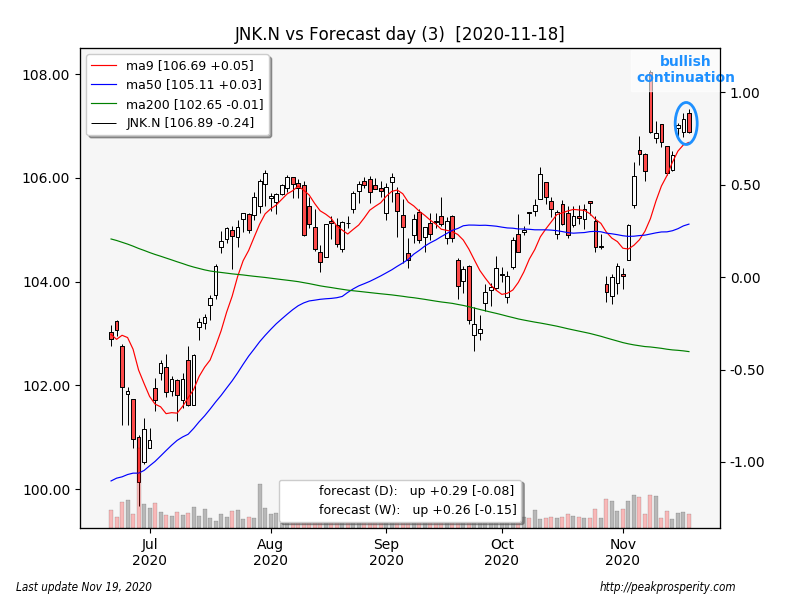 The GLD ETF tonnage on hand dropped -7.30 tons, with 1219 tons remaining in inventory.

Physical ETF discounts hit -4% today, which is the widest I’ve seen in quite a while. Big bar premiums on silver are below 5%, while big bar premiums on gold remain intact. Goldbug demand just continues to decline.

Gold, silver, and the miners continue to sell off, with no reversal in sight. Premiums support this move; they continue to shrink, especially in silver, while discounts in the physical ETFs expand. There just isn’t any demand for gold and silver right now – not at COMEX, not the physical ETFs, and not at retail – at least for silver.

The mining shares appear ready to break down to new lows too – today’s black marubozu is not a good sign. GDX has already done so – the lower low means GDX has been in a downtrend now for 4 months.

My best guess is, the PM complex is waiting to see stimulus. No stimulus = no rally. And right now, regardless of what the MSM says, things are on hold until the Presidential election gets sorted out. Which it isn’t.

The buck is down right at support – the falling dollar has not helped gold at all. In fact, gold/Euros is now below the 200 MA for the first time since the pandemic lows in March. That’s not a good sign.

Risk assets are now starting to weaken; equities sold off fairly hard, while copper and crappy debt moved lower, and crude also staged a failed rally. Equities are now in a mild downtrend in the near term. Even so, prices remain very near the highs for equities, crappy debt, and copper.

Bonds continue to get a bid, although not a particularly strong one.

The whole herd immunity thesis does appear to be holding up, at least in states where there were few restrictions and a whole lot of cases over the summer, such as Arizona, Florida, and even Texas. Other states, which had yet to be exposed, are having a more difficult time.

It is really sad. If all patients were treated – early – like our elderly, obese president – deaths would be a small fraction of what they are today. He got over it in 5 days, and then went out and campaigned hard for the next month.

That’s because the Bad Orange President was fortunate enough to have a doctor that didn’t follow the pathetic federal treatment guidelines, which sum to: “suck it up citizen; go home, and hope for the best.” For which we paid $47 billion this year alone. Of course Fauci himself is taking vitamin-D; “prophylaxis for me, but not for thee.”

Here’s Arizona. Now just imagine what it would look like if all the vulnerable people were prescribed calcifediol (high dose vitamin-D) upon testing positive? ICU admissions dropped from 50% down to 2% in that Spanish study. The red line could spike, but the deaths would hardly move.

That’s what we’d see if we lived in a real country, with real national medical leadership. 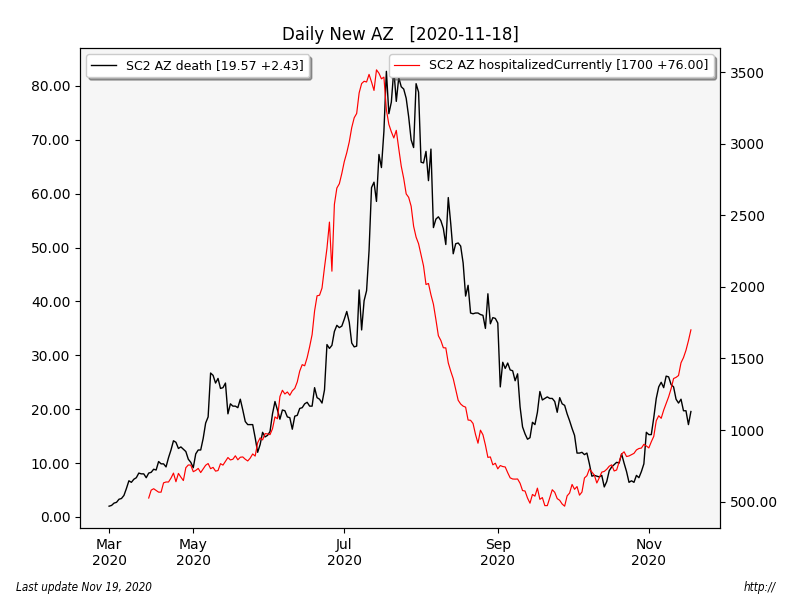 I wish I had the money in my brokerage account to buy some more gold and silver miner calls because they look like total sh*t. The ‘vaccine narrative’ is exactly what you would need to wash out the sector before beginning the next leg up in this bull market.

Transferring money from BlockFi (crypto bank account) to the brokerage account is a pain, but maybe I should do it anyways.

Meanwhile back at bitcoin ranch:

This indicator tracks MohammadMasts posts on PP.com and the more cuss words that he uses to describe the bitcoin bull market, the higher the rating.

It is actual a descent composite of market and social sentiment indicators, despite its simple appearance. I expect it to hit 97-98 when/if bitcoin reaches 19K.

There looks like a lot of selling going on at 18K. Don’t people know that you never sell bitcoin?

I think I finally figured out why European governments are happy to go into a second partial lockdown, at seemingly eye-watering economic cost. We talked about it before but it took me a while to connect the dots.

Covid takes out a chunk of the economically least productive members of society, the financial liabilities, cutting years to decades off the unproductive part of their lives. Those future years and decades are essentially a guaranteed future economic boost, that governments may be factoring in behind the scenes, whilst ‘happily’ growing the national debt.

I haven’t done the math but my gut says that these 2 opposing factors would be in the same ball park.

As for the herd immunity thesis, I can’t see the data holding up for it in Europe, with poster child Sweden no less effected at this point in time than many other countries with much stricter first wave lockdowns: 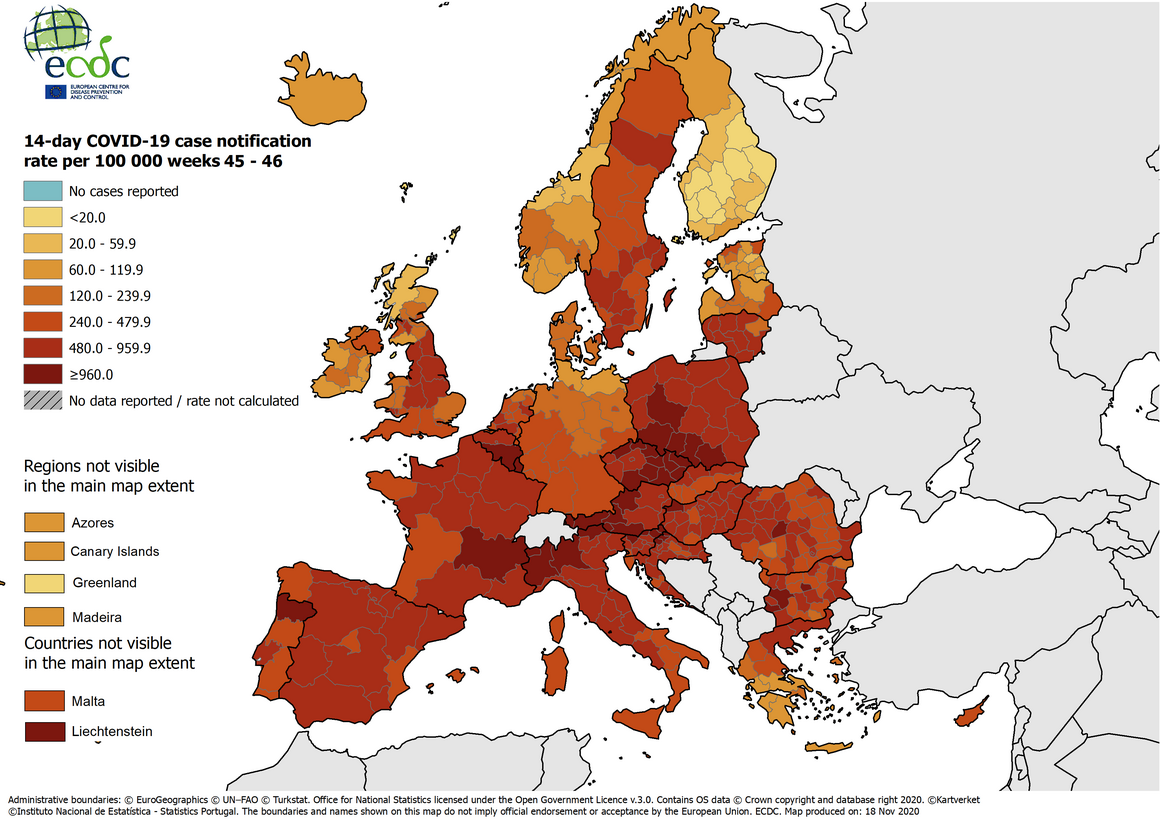 Take a look at the deaths, not the positive tests.  You will see a big difference between Sweden and the rest of the continent.

I was also mulling over the UK NHS and their recommendation for 800 iu of vitamin D.  It just seemed really lame.

Longevity is – I’m beginning to become convinced – all about avoiding deficiency of one sort or another.  Vitamin D, Niacin, glutathione, melatonin.  COVID kills people with deficiencies.

Those older people, if they get enough of these basic elements, could be around for years.  Years and years. Maybe another decade, each.  And healthier too.  What would that do to social security?  Or whatever you guys have as a pension system.  Retirement age stays the same, and people just keep living longer!

Wish I knew how to use calls…maybe I’ll try to figure it out next year. That said, sitting on several silver heavy mining positions I picked up early summer and am just marginally up on them. Ditched my PM ETF’s last week. I’ve dropped substantial money (for me) in crypto over the last 3 weeks. Maybe I’m buying at a top, maybe not. Crypto is now around 3% of my net worth. I’m going to sleep just fine knowing that…..even if it’s down to 2% next week. I’m going to treat it like physical gold and silver….it won’t be sold unless I feel it’s nosebleed territory or I’m broke.

Good job at getting into crypto. I highly recommend BlockFi.com.

Whether you can trade crypto on BlockFi depends on your state. Texas just became eligible to trade a few weeks ago. That makes it so much easier now for this Tejas dumbass.

I’ve made over $3K (in USD value) in interest from BlockFi in just 5 months of using it. And the interest is paid in-kind (meaning it’s paid in crypto) and it’s compounded monthly. Plus, if the crypto is rising versus USD, you actually make significantly more interest in USD terms. This obviously is a double-edged sword.

Support on BlockFi has been good for me.

I sold half of my physical gold last month and bought PAXG tokenized gold with it. Now I can finally earn interest on that ‘barbaric relic’ that provides no income, lol. Where else in the markets are going to get 5% APR on anything? Maybe junk bonds?

I have zero concerns at being able to convert PAXG to real gold in the future, but I will probably just converting it to USD.

Also you ought to know that the rumor is that the USDC stablecoin will actually become the FED’s digital currency in the future. It seems to be preferred over the other USD stablecoins by the ‘men behind the curtain’. I actually think this is a good thing but I understand anyone’s concern over this.

If you haven’t bought Ether yet, typically it performs really well in the Dec-Jan-Feb timeframe (as priced in bitcoin). Unless bitcoin absolutely crashes soon, which I doubt, I suspect an investment in ETH would translate to more bitcoin for your money into 2021.

I hope I didn’t overload you with info. Just trying to help a brother out.