Gold sold off in Asia and London, reversing around 8 am, rallying through late morning in New York, erasing all the early losses and then some. The spinning top candle was a bullish continuation, and forecaster moved lower but remains in an uptrend. Gold remains in a downtrend in the weekly and monthly timeframes. Gold/Euros is in more or less the same position.

Futures are projecting a 0% chance of a rate cut in December. 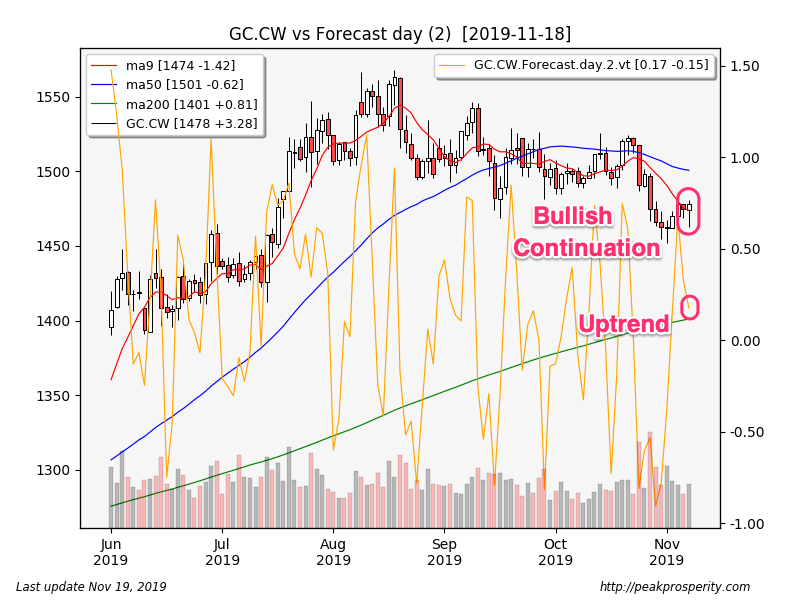 Silver more or less followed gold, bottoming out at 8am, then bouncing back into the green by late morning. The high wave candle was a bullish continuation, while forecaster inched lower, remaining in a slight downtrend. Silver is in a downtrend in the daily and weekly timeframes, but the trends are quite shallow. 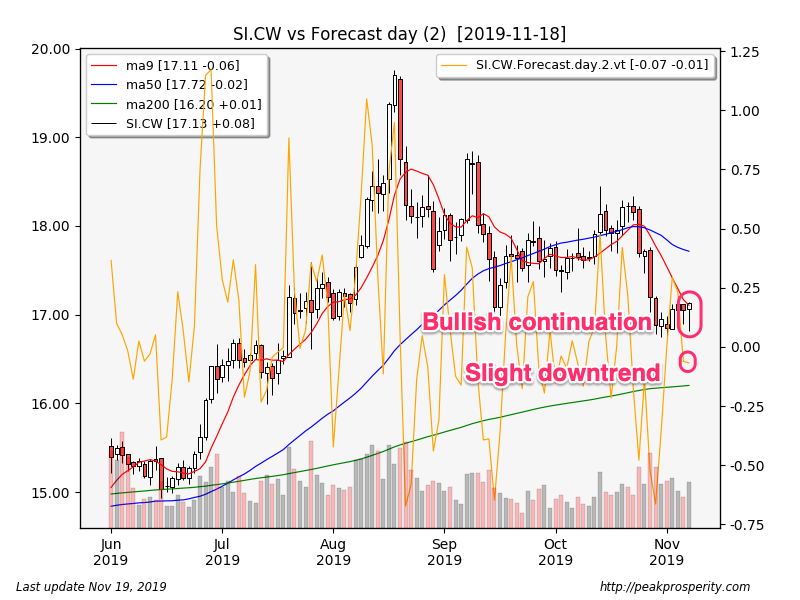 Miners rallied all through the morning, closing near the highs of the day. GDX moved up +1.72% on moderate volume, while GDXJ climbed +1.48% on light volume. XAU rallied +1.40%, the opening white marubozu was a bullish continuation, and forecaster jumped higher into what is now a strong uptrend. XAU remains in an uptrend in both daily and monthly timeframes. 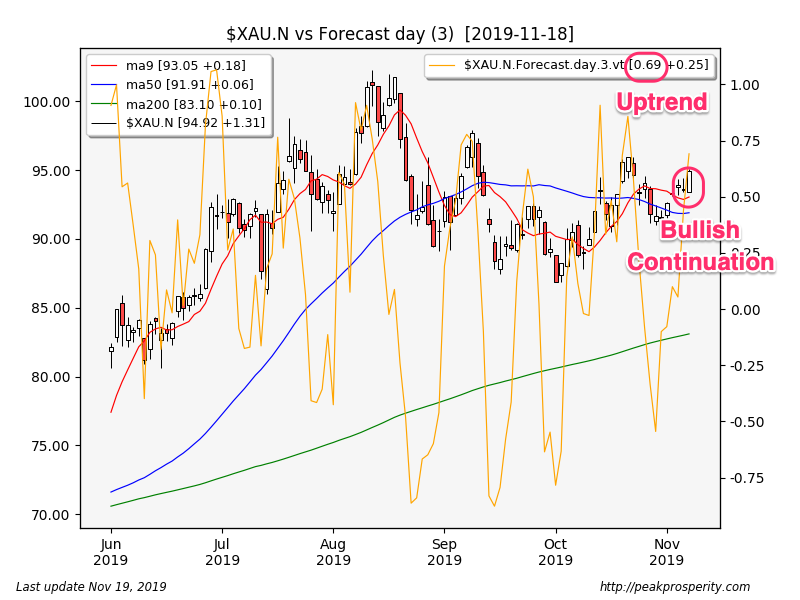 The buck fell -0.23 [-0.24%] to 97.35. The opening black marubozu was a bearish continuation, and forecaster fell deeper into its downtrend. The buck remains in a downtrend in the daily and weekly timeframes.

Crude fell -1.04 [-1.80%] to 56.89. The long black candle was a bullish continuation, but forecaster inched lower, entering a slight downtrend. Today’s move pulled crude below both the 200 and the 9 MA lines. Crude is now in an uptrend in both weekly and monthly timeframes.

JNK fell -0.09%, the short black candle was neutral, and forecaster moved higher into an uptrend. BAA.AAA differential remains at +0.87 bp. There really is no worry – at least from this indicator – over credit quality.

Continued support for gold and bonds, and continued selling in copper and other industrial metals paint a picture of pessimism about the US-China trade deal.

And today Beijing finally confirmed what have been my suspicions for a while now, per CNBC:

The Chinese are looking carefully at the political situation in the U.S. including the impeachment hearings and the presidential election, the source said, adding the officials are wondering if it is more rational to wait things out since it is unclear what Trump’s standing will be even in a few months.  https://www.cnbc.com/2019/11/18/mood-in-beijing-about-trade-deal-is-pessimistic-government-source-tells-cnbc.html

Right. They want Trump to cave on tariffs in exchange for pork & soybeans. Trump didn’t do so (and good for him on that score), and now they are a little irritated that the plan didn’t work.

And there is that Hong Kong Democracy bill that is stuck in the Senate, which which has bipartisan support; it is slightly different than the one already passed by the House – the soonest it could reach Trump’s desk would be after the Thanksgiving holiday.  That’s probably the next shoe to drop, although it won’t be dropped too quickly.  I do not think we’ll see a trade deal unless Trump caves – and it does not look like he will do so at this point.