Gold moved higher, with a brief correction around 8am, in a relatively narrow trading range.  The spinning top candle was unrated, while forecaster rose +0.08 to +0.19. That’s a mild uptrend. Today’s move was enough to pull price just above the 50 MA. Gold/Euros looked better; it is now back above both the 50 and 9 MA lines. It has not yet broken out of its downtrend channel, but GC.EUR is back in an uptrend in the daily and monthly timeframes. 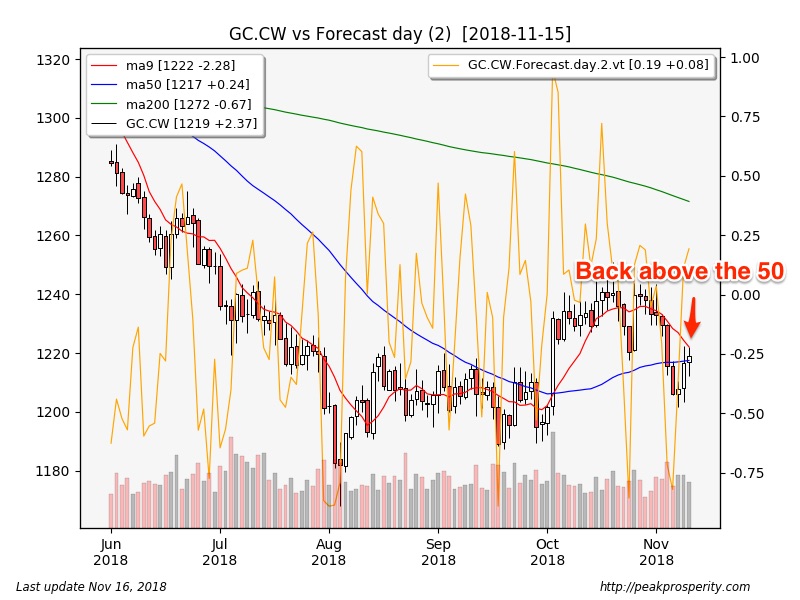 Silver did a lot better than gold, avoiding any correction, and taking off at about 8:30 am, roughly around the same time that palladium started its big breakout move.  Silver printed a swing low pattern (56% reversal), and forecaster moved up +0.21 to +0.21, which is a mild uptrend. Silver’s rally stopped right at the 9 MA. Silver remains in an uptrend in both the daily and monthly timeframes. 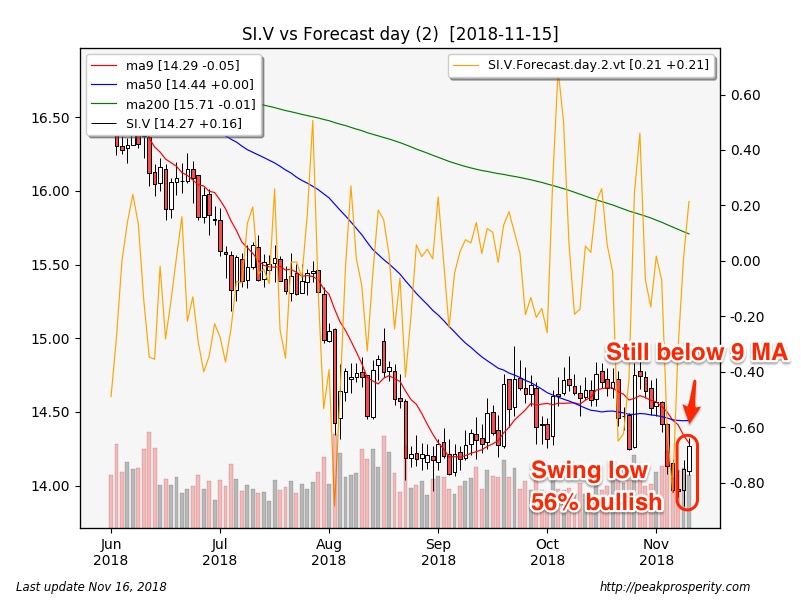 Miners moved higher, with GDX up +1.38% on moderate volume, while GDXJ climbed +1.80% on moderately heavy volume. XAU did even better, rising +2.30%; the white marubozu candle was a bullish continuation, and forecaster jumped +0.47 to +0.17, which was a buy signal for XAU. The move took XAU back above its 9 MA, which is a positive sign. XAU is now in an uptrend in the daily and monthly timeframes. On the daily XAU chart, you can see what looks like a rough double bottom pattern forming – it would need a close above 72 to confirm, but if it does, it would be a very strong bullish pattern. If that happens, it will likely be several weeks in the future. 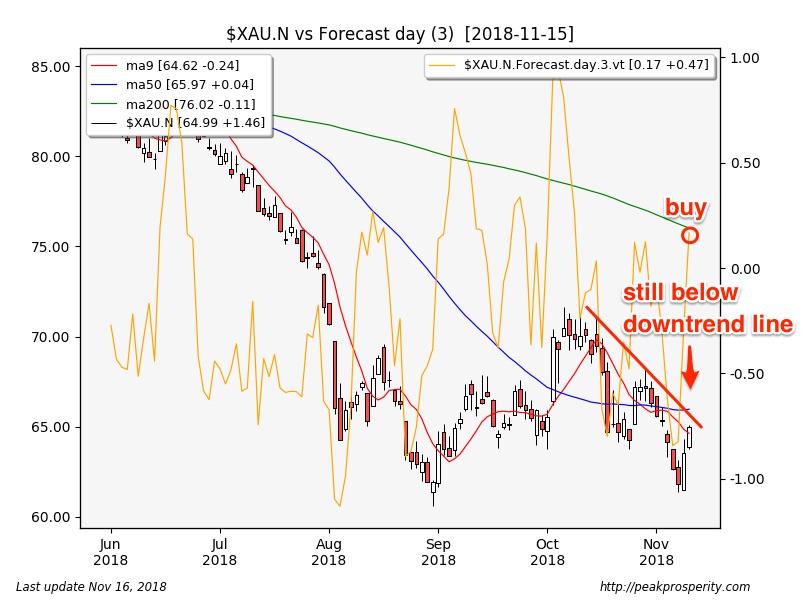 Platinum climbed +0.76%, palladium shot up +2.66% breaking out to a new all time high, while copper rallied +1.27%. The other metals looked reasonably strong today; by comparison, silver was a bit of a slug, while gold definitely did the worst of the group. This pattern suggests that today might have been a rally based on positive sentiment about the resolution of the US-China trade situation. There was no specific news article I saw that supported this thesis, but that’s what the price patterns felt like to me.

The buck rose +0.14 [+0.15%] to 96.44; the buck tried to rally hitting 97.25 at one point, but was not able to hold the gains, losing most of the move by end of day. The doji candle was unrated, but forecaster dropped -0.25 to -0.17, which is a sell signal for the buck. Still, the buck remains above all 3 moving averages, and remains in an uptrend in the weekly and monthly timeframes.

Most of the fuss in the currency markets today was caused by GBP, which plunged -1.75% after a flurry of BRExit-related news hit; The Telegraph’s headline summarizes the situation: “Theresa May clings on after devastating day of ministerial resignations over plan.” Four ministers resigned today, including the head of BRExit, Rabb. Why were they upset? Well. A pithy response to that is, May’s BRExit deal is basically BRExit without actually leaving the EU.

So the UK isn’t in the EU, but they have to pay a “divorce” fee of 39 billion Euros, they can’t make trade agreements with anyone else, the UK remains subject to the EU court decisions, they cannot withdraw from the arrangement, and the whole mess can be extended “if there is still no agreement.”

Crude moved up +0.54 [+0.96%] to 56.87. The long white candle was unrated, while forecaster jumped +0.52 to -0.03. That’s not quite a buy signal, but it was a much stronger reaction than I expected to today’s feeble rally. EIA report was very bearish: crude +10.3m, gasoline -1.4m, distillates: -3.6m. Given that, its surprising oil wasn’t utterly crushed following the release. From that viewpoint, if a market refuses to tank on terrible news, that’s actually a bullish sign. Even so, the recent tepid crude rally looks a bit like a dead cat bounce to me; during a downtrend, oil has this pattern of rallying for a few days, and then selling off hard once more.

SPX rallied +28.62 [+1.06%] to 2730.20.  SPX actually sold off fairly hard in the morning, dropping about 30 points, but then rebounded strongly in the late morning and early afternoon.  The long white candle may be a reversal (37% bullish – pretty good for a long-white) but forecaster moved up just +0.21 to -0.45, which is still a downtrend. Today’s rally pulled the monthly back into an uptrend, however SPX remains in a downtrend in both the daily and weekly timeframes. SPX also remains below all 3 moving averages.

TLT fell just -0.04%, which was fairly surprising to me, given the large rally in equities. TY actually rallied, moving up +0.13%, the spinning top candle a bullish continuation. TY even made a new high, although it had an odor of failed rally to it. Still, forecaster ticked down just -0.03 to +0.65, which remains a strong uptrend. TY is above both 9 and 50 MA lines, and is now in an uptrend in all 3 timeframes. When did that happen? It looks like the recent 5-day rally in the 10-year managed to unwind the monthly sell signal. Hmm. That’s a risk-off signal. The 10-year yield fell -0.2 bp to 3.12%.

JNK fell -0.06%, making a new low. That said, the closing white marubozu candle could well be a reversal (51%) – that’s a very high rating for this candle type. On the chart, the candle does look very strong.  Forecaster jumped +0.62 to -0.53. We might just have a near-term low for junky debt.

CRB fell -1.34%; I’m not sure how that happened, since I show 4 of 5 sectors rallying, and energy (-1.30%) didn’t drop all that much. I think maybe CRB closes out at a different time from the sectors. Natgas had another exciting day, dropping 16% – in one day! – entirely unwinding yesterday’s massive rally. Shenanigans or too many shorts forced to cover? Or maybe a bit of both.

Viewed in isolation, both gold and silver managed to move higher today in the face of a move higher in the buck. That sounds pretty good – but it happened in the context of an overall metals rally which saw gold and silver rise a relatively smaller amount compared to many of the other items. Today’s rally was probably driven by expectations of a settlement (or at least progress in that direction) in the US-China trade struggle.  That also probably influenced both equities as well as junky debt.

Still, if we do move torwards a resolution to the trade issue, that should be quite positive for the metals overall, as it would be for equities and risk assets in general.  And the timing makes sense – China was waiting to see if Trump would be crushed in the midterms (but I’m sure they didn’t “meddle” in the US elections – only Russia does that, and of course the US does this as well around the world, but we call it “Regime Change”, and so it’s ok) and when he wasn’t, it makes sense for them to see if they can close a deal before those 25% tariffs hit January 1 2019.

Any bets on a hard BRExit?  It could happen.