Gold staged another moderate rally again today, keeping most of its gains into the close. The long white candle was a bullish continuation, and forecaster moved higher into its uptrend. In spite of the rally, gold remains in a downtrend in the weekly and monthly timeframes. Gold/Euros is in more or less the same position: short term uptrend, medium-term downtrend.

Futures are projecting a 2% chance of a rate cut in December. 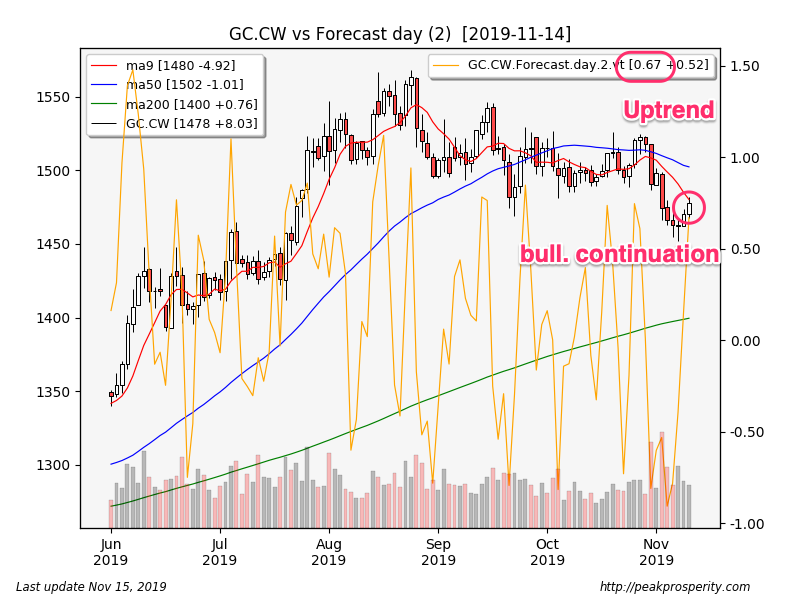 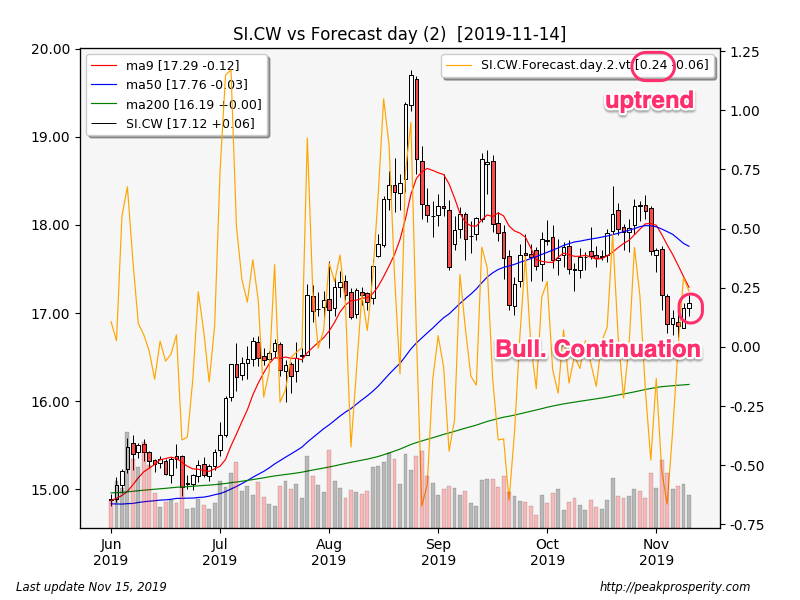 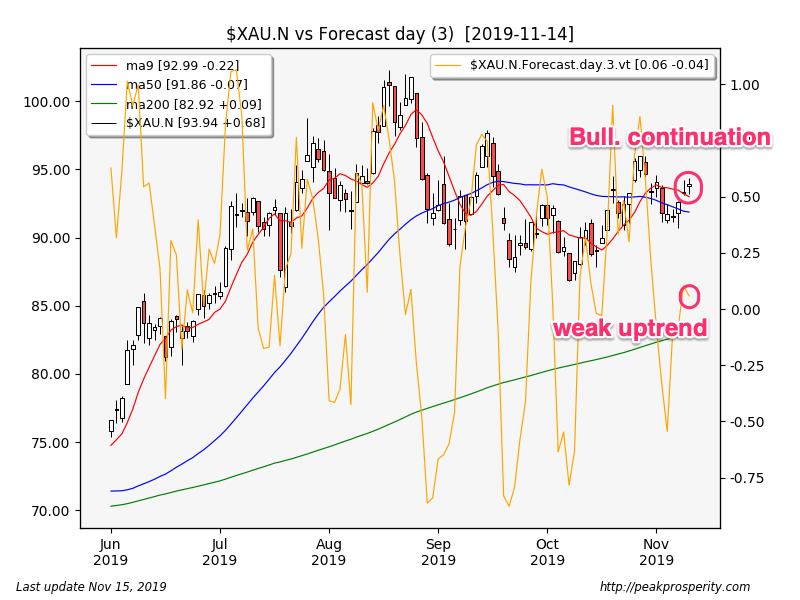 Platinum rose +0.68%, palladium jumped +1.65%, and copper dropped -0.57%. That’s the 5th straight loss for copper, while both platinum and palladium have moved back into uptrends – albeit weak ones.

The buck fell -0.22 [-0.22%] to 97.72. The swing high pattern was quite bearish (60%), and forecaster moved lower but remains in an uptrend. The buck remains in an uptrend in the daily and monthly timeframes.  If this bearish reversal is the real deal, and the buck starts to fall more seriously, it should be helpful for gold and PM in general. 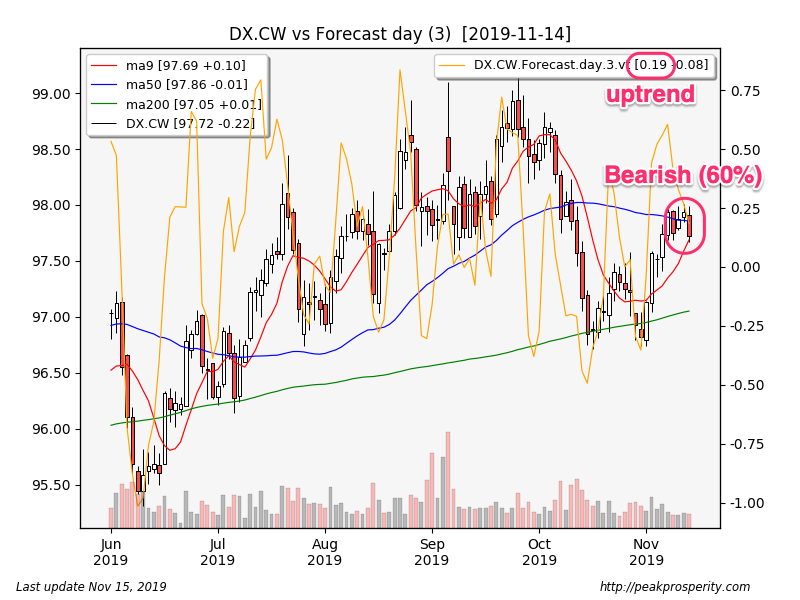 Crude fell -0.43 [-0.75%] to 56.93. The long black candle was mildly bearish (30%) and forecaster dropped into a downtrend. Today marks the 9th straight day of crude attempting (and failing) to close above the 200 MA. Crude is in an uptrend in both weekly and monthly timeframes.

The EIA report at 11:00 am was somewhat bearish: crude +2.2m, gasoline +1.9m, distillates -2.5m. All of today’s losses came immediately after the EIA report. 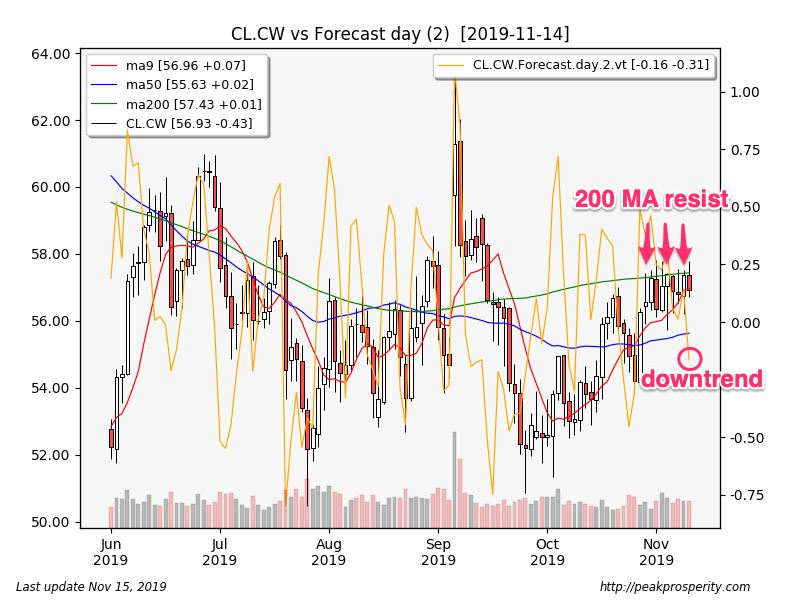 SPX rose +2.59 [+0.08%] to 3096.63. The spinning top candle was a bullish continuation, and forecaster inched higher and remains in a moderate uptrend. Today was yet another all time closing high. SPX remains in an uptrend in all 3 timeframes.

TLT rallied +1.03%, the high wave candle was a bullish continuation, and forecaster moved higher into what is now a strong uptrend. The 30-year yield dropped -5 bp to 2.31%. TY also rallied strong, up +0.42%, the opening white marubozu was a bullish continuation, and forecaster jumped into an uptrend. The 10 year yield fell -5.5 bp to 1.82%. TY remains in a downtrend in both weekly and monthly timeframes, but that weekly is quite close to a reversal. 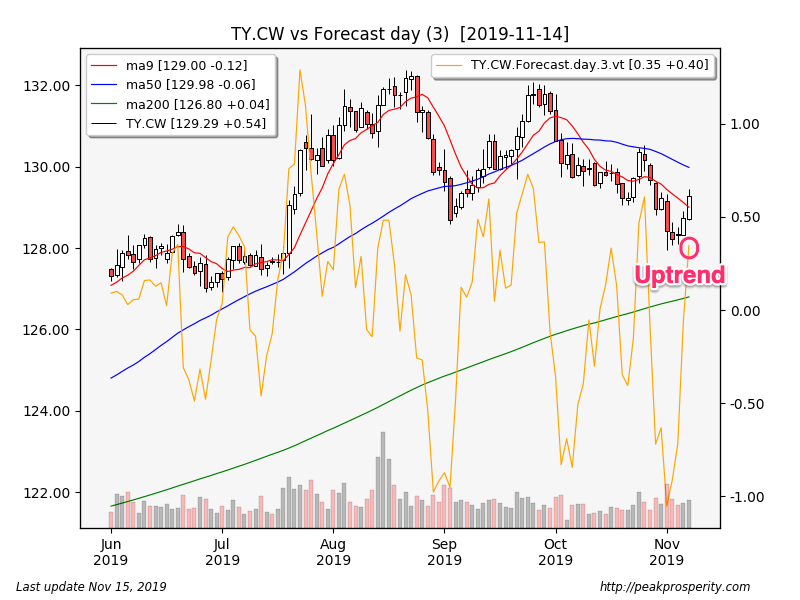 JNK dropped -0.06%, the spinning top candle was a bearish continuation, and forecaster moved lower into its downtrend. JNK continues to slowly sell off – it has been falling now for the better part of 3 weeks. This does not align with the sequence of new all time highs in SPX. One of these two “risk” indicators is wrong. BAA.AAA differential fell -3 bp to +85 bp. That’s a new multi-year low for the differential. There really is no worry – at least from this indicator – over credit quality.

CRB fell -0.12%, with 3 of 5 sectors falling, led by industrial metals (-0.94%). Industrial metals have dropped for 6 of the last 7 trading days, and are quite near the lower end of their recent trading range. A breakdown below the lows would be a signal of something fairly unpleasant – either in the global economy or regarding the US-China trade deal.

Bonds, gold and silver appear to have staged a bullish reversal on the daily charts. Taken together with the fall in industrial metals, this appears to be mostly about the now-fading prospects of a US-China trade deal.  So far SPX hasn’t yet noticed the change, but it will, eventually.  JNK, for its part, has been slowly falling, I suspect for reasons other than trade.  Crappy debt defaults are likely to drive our next crisis, whatever form it takes, as is usually the case.  Fed’s balance sheet was updated today: on the week, it rose just +8.4 billion to $4.048 trillion, a small increase over last week.  While things aren’t improving, they are getting worse more slowly.

China demanded today that all tariffs be removed as a condition of the “phase one” (pork-and-soybeans) trade deal. Certainly, if this occurs, then there is zero hope of any follow-on trade deal, as China will not have any motivation to negotiate once the tariffs are gone.

A month ago, when there was the threat of new tariffs due to hit October 15th, there was an “agreement in principle.” Now, with no new tariffs on the horizon, things seem far from settled. It sure sounds as though Trump is being strung along.

Inflection point for Hong Kong is coming closer. Xi tells us that “continuing radical violent crimes” have “seriously trampled on the rule of law.” There were hints of a weekend curfew, later denied. The US Senate is readying a quick vote on the Hong Kong Democracy bill – probably not something that happens without Trump’s acquiescence. China has vowed retaliation if Congress passes this bill.

Question: Is it even possible for “two systems” (c.f. “One Country, Two Systems”) to exist under the rule of the CCP? Taiwan (“Province of China”) has to be looking at the events in Hong Kong for answers to that exact question. Taiwan is an example – just a short flight away – of what Chinese life and culture might be like under a different system – one without CCP rule.  I found it to be a pretty nice place.