Meanwhile, the shooting of a young protester by a HK policeman over the weekend has launched three days of protests, with office workers now leaving their jobs at lunch hour to attend. Secondary schools have been suspended, and universities have said they will shorten the term or replace on-campus lectures with online classes. At Armstrong’s site, a brief commentary reads: “China will most likely intervene in Hong Kong as their previous “hands off” policy is not providing the desired result.” I quote him because he has contacts in both Hong Kong and the mainland, and he is generally very circumspect about anything having to do with China.

Gold spent most of the day moving higher; the swing low print was very bullish (68%), and forecaster jumped into an uptrend. The reversal pattern on the daily chart looks strong. Nevertheless, gold remains in a downtrend in the weekly and monthly timeframes.

Futures are projecting a 4% chance of a rate cut in December. 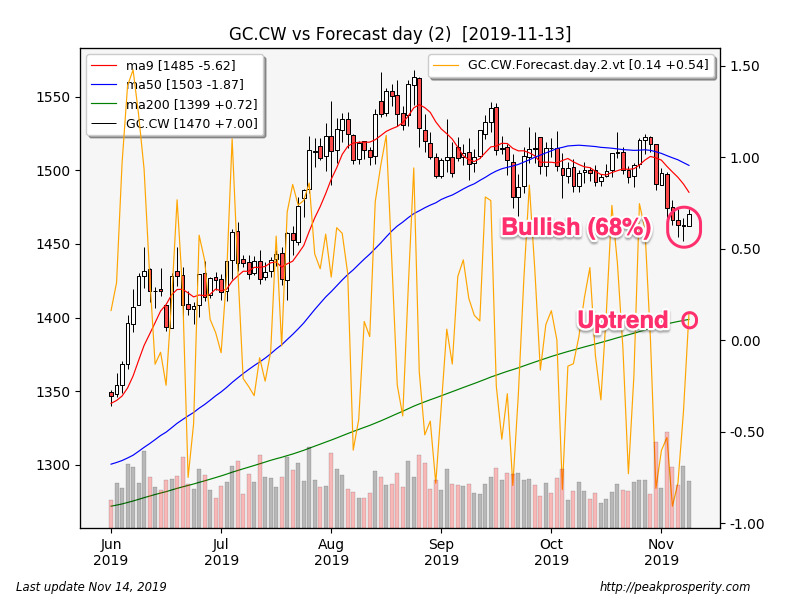 Silver’s gains mostly happened during the Asia trading session. The swing low pattern was bullish (58%) and forecaster jumped into an uptrend. Silver is now in an uptrend in both daily and monthly timeframes. 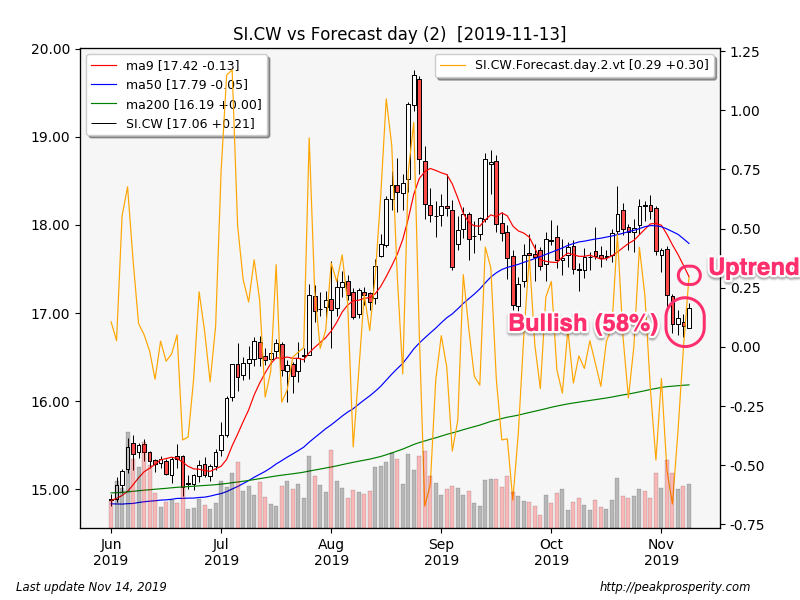 Miners opened up, tried to rally but failed. GDX rose +0.60% on moderately light volume, while GDXJ moved up +0.05% on light volume. XAU climbed +0.71%, the swing low pattern was a bullish reversal (51%), and forecaster moved into an uptrend. XAU is now in an uptrend in both daily and monthly timeframes.  XAU is now back above all 3 moving averages.  Note how the miners didn’t make a new low during the last cycle; that suggests a strong bid under the miners as the prices of the metals plunged. 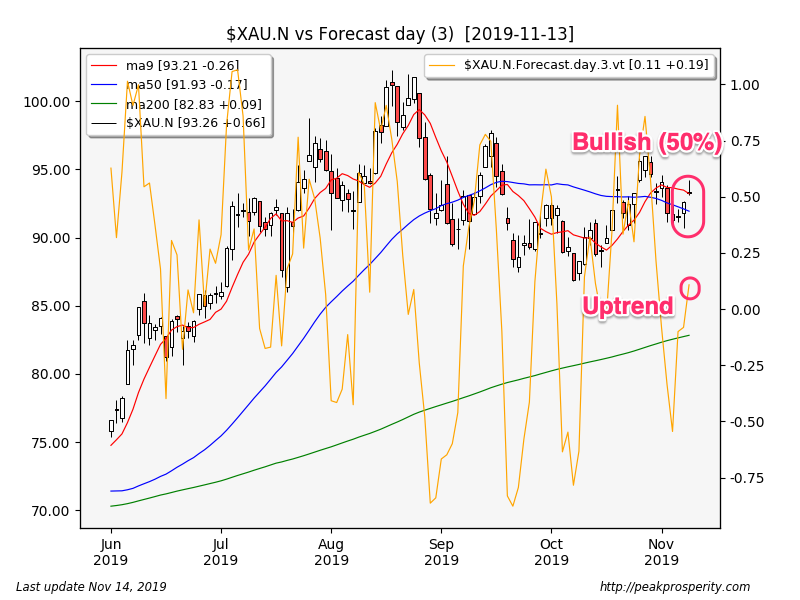 The buck rose +0.07 [+0.07%] to 97.94. The short white/spinning top candle was a bullish continuation, and forecaster moved lower but remained in an uptrend. The buck remains in an uptrend in the daily and monthly timeframes.

SPX moved up +2.20 [+0.07%] to 3094.04. The long white candle was a bullish continuation, and forecaster moved higher into its moderate uptrend. SPX remains in an uptrend in all 3 timeframes.

TLT climbed +0.65%, the spinning top candle was a bullish continuation, and forecaster inched lower but remains in a reasonably strong uptrend. The 30-year yield fell -3 bp to 2.36%. TY rallied too, up +0.30%, the confirmed bullish NR7 was bullish (50%), and forecaster jumped strongly but not quite enough to move into an uptrend. TY remains in a downtrend in all 3 timeframes. The 10-year yield fell -3.9 bp to 1.87%.

JNK fell -0.11%, the short white candle was mildly bullish (32%), but forecaster moved lower into its downtrend. Although the ongoing decline in JNK isn’t particularly strong, it is sending a more “risk off” signal than SPX. BAA.AAA differential remains at +88 bp. Credit concern remains modest at best.

In looking at the commodity complex, I notice that industrial metals have done poorly over the last 4 days. Copper has moved lower, but the overall metals group has had a much more precipitous decline. Reading the tea leaves, this is probably about the prospects for the US-China trade deal. My guess is, well-connected insiders in both the US and China are placing their bets based on inside information.  It isn’t a good sign.

The 10-year bond may be in the process of reversing, and gold, silver and the miners all printed bullish reversals today.  Gold’s reasonably strong performance was noteworthy because it happened in spite of an ongoing build in open interest.  Today was yet another new all time high in OI. Given the strong selling pressure that gold is enduring from new paper at COMEX, today’s reversal suggests a strong underlying bid.

So far, SPX has managed to continue inching higher in spite of the recent flurry of risk off signals. So far.

If China “intervenes” in Hong Kong, it will not be politically possible for Trump to conclude a trade deal with China. The market will sort this out very rapidly.  Any Hong Kong “Tienanmen” event will be seen through a million different phone-cameras, shown via twitter and youtube around the world. The USD-HKG peg will snap, possibly igniting a banking crisis across Asia. A year from now, the US may well be granting political asylum to a flood of well-educated political refugees from these events.  Hong Kongers may be the next large immigrant group from Asia, some 45 years after the fall of Saigon.  https://en.wikipedia.org/wiki/Fall_of_Saigon

Of course it may not happen. It is entirely up to Beijing as to how this plays out.

But my sense is, the risk of such an event increases by the day.  That, along with the Not-QE program by the Fed put in place for reasons that are “still being investigated”, are what I’m watching right now.