Today, Trump gave a speech in which he threatened to impose substantially higher tariffs on China if no agreement is reached. While that did seem to pull equity market prices down from their highs, the drop wasn’t enough to pull prices into negative territory.

At the same time, it is really starting to seem as though China is just stringing Trump along, hoping to put off any tariff increases as long as possible while giving away next to nothing.  “My goodness, wherever could we sign the agreement?  No, that place won’t work.  What’s the shape of the conference table, again?”  Note how the link below doesn’t match the article headline – though you have to click through to see it. What will Trump do once he figures this out?

Related: will the increase in US manufacturing jobs balance out the higher prices paid by US consumers for “stuff coming from China?”

Gold chopped sideways, spiking lower at roughly 10:40 am making a new low, but then managed to bounce back by end of day. The doji candle was mildly bullish (33%), and forecaster jumped higher but remains in a downtrend. Gold remains in a downtrend in all 3 timeframes. Today’s extremely high volume, with no price movement, may be telling us that the recent dip might be nearing an end.

COMEX GC open interest rose +4,532 contracts. There is still no short-covering even after the recent substantial decline.

Futures are projecting a 4% chance of a rate cut in December. 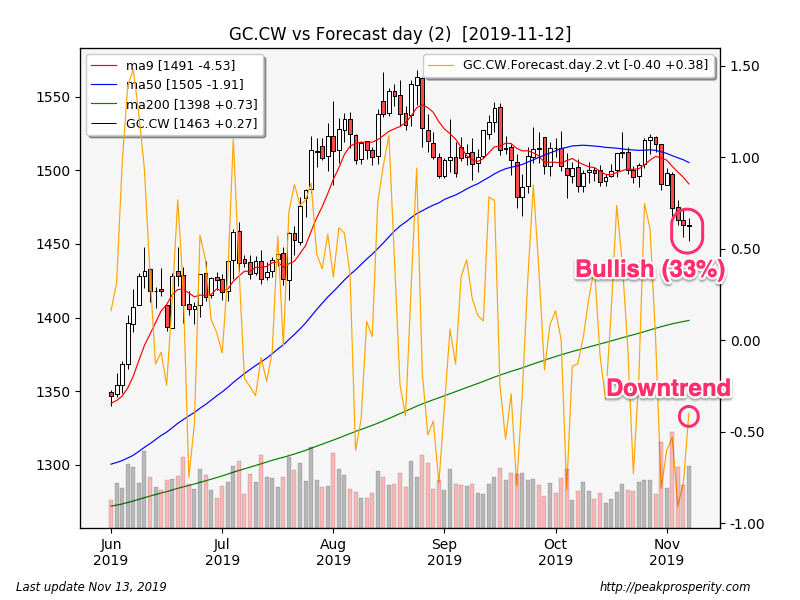 Silver looked a bit more bearish than gold, making its new low at roughly the same time as gold, but the bounce back was not nearly as strong. The short black candle was a bearish continuation, but forecaster jumped strongly higher, and is now back to a no-trend state. Silver is in a downtrend on the weekly, and remains in an uptrend on the monthly. Is this a reversal for silver? Forecaster says: maybe. 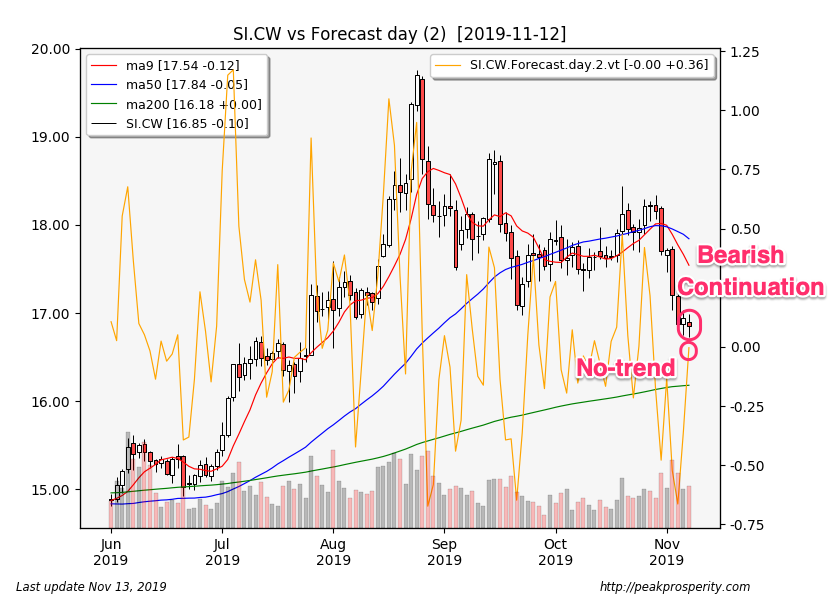 Miners fell during the first 60 minutes of trading, then rallied for the remainder of the day. GDX climbed +1.33% on moderate volume, while GDXJ jumped +1.95% on moderate volume also. XAU moved up +1.17%, the spinning top candle was neutral, and forecaster jumped higher but remains in a slight downtrend. (Forecasters for both GDX and GDXJ jumped back into uptrends, FWIW). XAU is now in a downtrend in both daily and weekly timeframes. 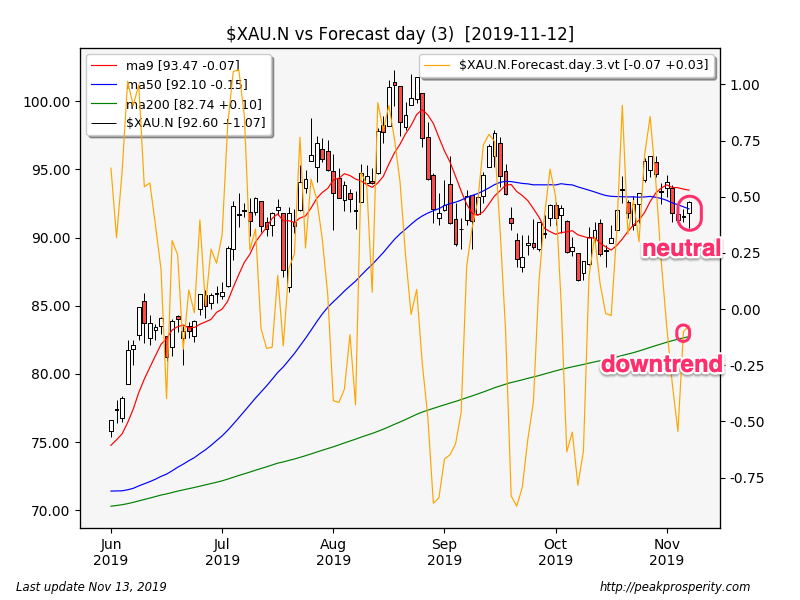 Crude fell -0.10 [-0.18% to 56.80. Crude tried to rally today but the rally failed – at roughly the same time gold hit its low. The doji candle was neutral, but forecaster inched lower, moving crude to a state of no-trend. Crude is in an uptrend in both weekly and monthly timeframes. If the trade thing doesn’t go well, expect crude to sell off.

SPX rose +4.83 [+0.16% to 3091.84. SPX made a new intraday all time high, but was not able to retain the gains through end of day. The high wave candle was a bullish continuation, and forecaster moved higher, remaining in an uptrend. SPX remains in an uptrend in all 3 timeframes.

TLT rose +0.46%, the spinning top candle was a bullish continuation, and forecaster jumped higher, moving into an uptrend. This might be a reversal for TLT. The 30-year yield fell -4 bp to 2.39%. TY rose +0.06%, the high wave candle was neutral, and forecaster moved higher but remains in a strong downtrend. The 10-year yield fell -3.4 bp to 1.91%. No reversal yet for the 10-year.

As I said earlier, not much happened in the markets today, at least not in the ones I follow. There are hints of a reversal in gold and bonds, but nothing definite just yet. The miners looked strong; since they tend to lead, perhaps they are giving us a clue where gold goes next.

Trump keeps saying that China “really wants a deal”, but with 2020 coming soon, he may just be projecting. If the trade deal falls through, Trump could definitely pivot to a much different position – one favored by his former strategic advisor, Steve Bannon (https://presentdangerchina.org/). How would the market respond? Most likely, not by making new all time highs.  However, an external threat is a time-honored way for a President to get himself re-elected.

Today’s VIX at 12 might look pretty cheap, if that is how things end up going. And of course, it would be gold-positive too.

How close are we to such an inflection point?  It appears that the bar to police using lethal force in Hong Kong may have been lowered more than a little. An unarmed student protester was shot over the weekend at point blank range by a HK police officer.  There was also a video of a policeman on a motorcycle (with lights & sirens) attempting to repeatedly run over protesters. In the “official denial” area, HK police have officially denied they have ordered officers to use their firearms “at will.”

We may be at or near the inflection point.  The excuse is there, anytime Trump wants to use it.