Gold chopped sideways in Asia, fell during the London session, then moved mostly sideways through end of day. The long black candle was a possible bullish reversal (31%), forecaster fell, moving deeper into its downtrend. Gold remains in a downtrend in all three timeframes.

Gold/euros dropped -4.18 [-0.26%] to 1587.71 on moderately heavy volume. The long black candle was a possible bearish reversal (33%), forecaster climbed, but remains in a downtrend. Gold/euros is in a downtrend in both the daily and monthly timeframes.

Today’s move lower in gold was roughly aligned with the rally in the buck; the candle print was mildly bullish, but the tea leaves are suggesting gold is still headed lower. 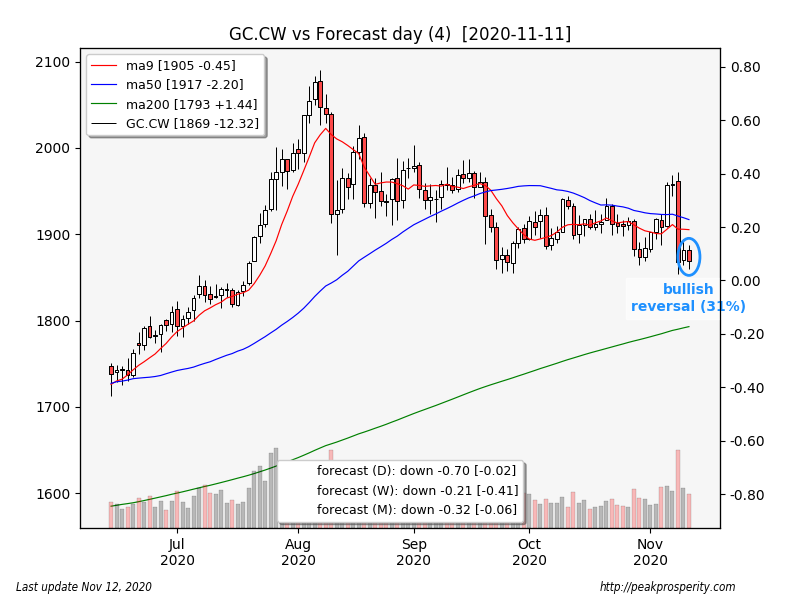 Silver sold off during the London session, alongside gold, but then rallied back strongly after the US market opened, wiping the losses out by the close. The doji candle was a bearish continuation, forecaster dropped, moving deeper into its downtrend. Silver is in a downtrend in both the daily and weekly timeframes.

Silver definitely looked better than gold intraday; while the overall trading range was small, dip-buyers did appear when silver fell through 24. No short-covering, however, and momentum is pointing lower for silver right now. 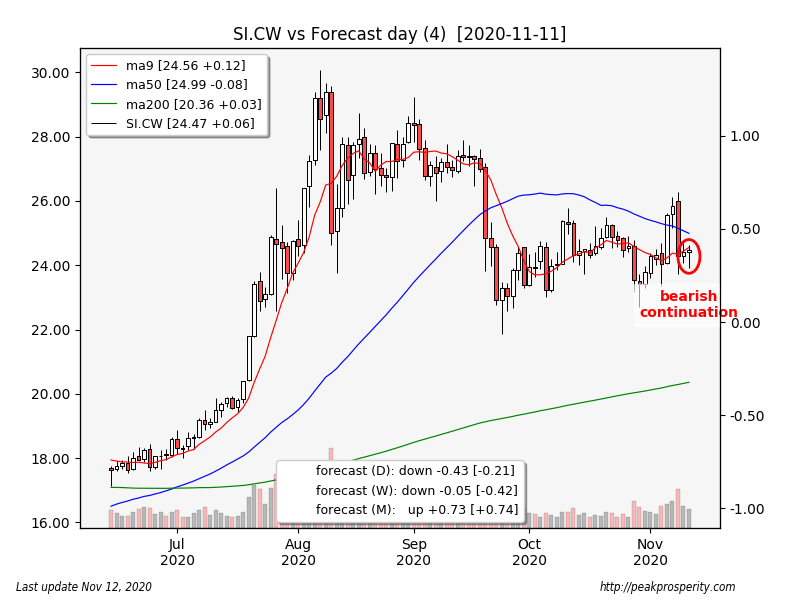 Miners gapped down at the open, fell in the first 30 minutes, then slowly recovered, finally ending the day at the highs. GDX dropped -1.09% on moderate volume, and GDXJ fell -2.07% on moderate volume. XAU moved down -1.02%, the gap down doji candle was a reasonably strong bullish reversal (40%), forecaster climbed, but remains in a downtrend. XAU is in a downtrend in all three timeframes.

While the miners underperformed gold, it wasn’t by very much. The candle print was reasonbly highly rated, and if the miners manage to rally tomorrow, it could be a pretty nice swing low. We have to wait and see how that goes. 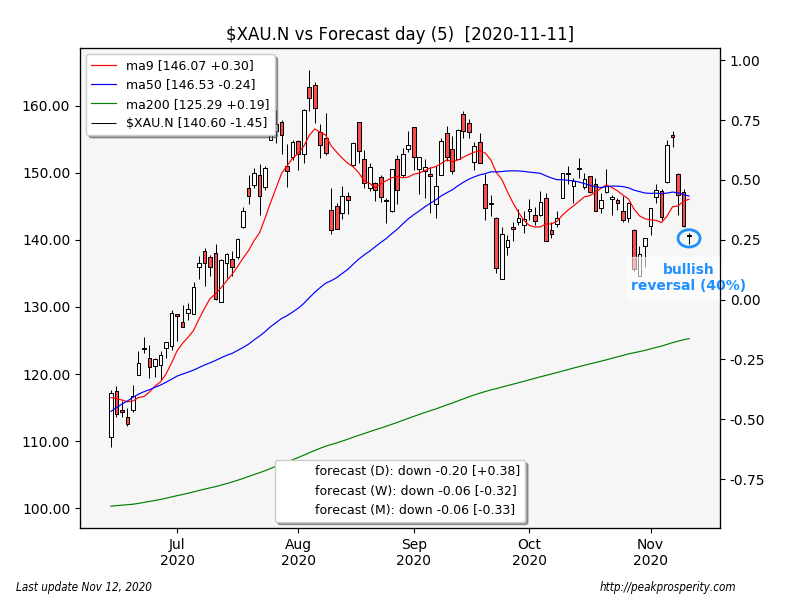 Copper fell -0.03 [-0.95%] to 3.12 on moderately heavy volume. The spinning top candle was a bearish continuation, forecaster dropped, but remains in an uptrend. Copper is in an uptrend in all three timeframes.

Today was a 3-candle swing high for copper, which still remains above all 3 moving averages. No change so far in copper’s uptrend. 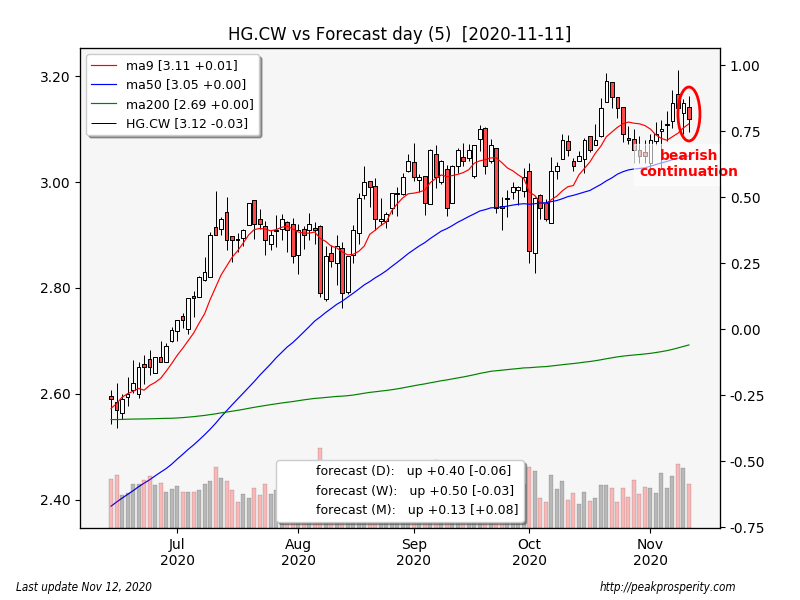 The buck climbed +0.29 [+0.31%] to 93.00 on moderate volume. The long white candle was a bullish continuation, forecaster dropped, but remains in an uptrend. The buck is in an uptrend in the monthly timeframe.

The buck’s rally today seemed to push gold prices lower, however silver managed to resist the pull. The buck right now is more or less in a state of no-trend. It needs a close above the 50 to really establish a direction. 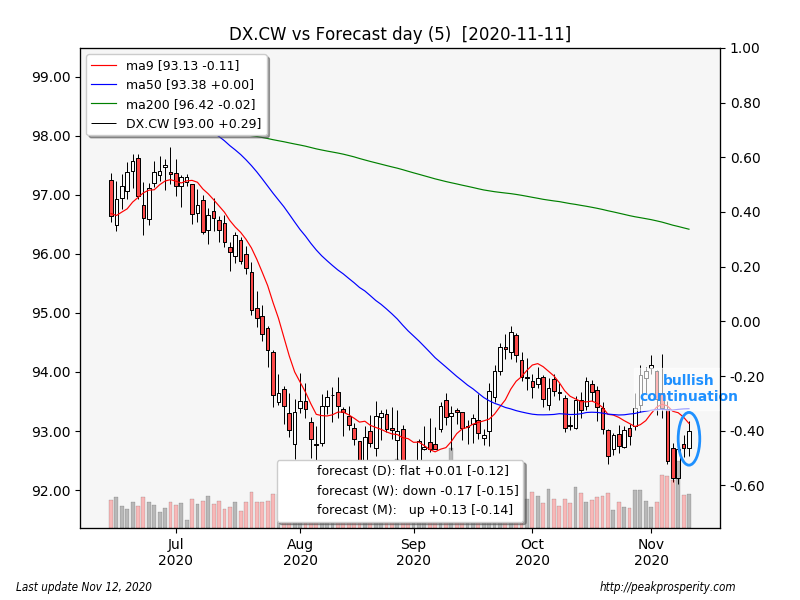 Crude fell -0.38 [-0.90%] to 41.63 on heavy volume. The bearish harami candle was a bullish continuation, forecaster dropped, but remains in an uptrend. Crude is in an uptrend in all three timeframes.

Note: Due to Veterans Day, the EIA report comes out on Thursday.

Crude rallied in Asia and London, making a new high to 43.06, but then fell pretty much for the remainder of the day, closing at the lows. The candle code thought the fairly-dramatic-looking failed rally wasn’t bearish, however, and forecaster continues to point higher, at least for now. If crude falls tomorrow though, the swing high print will probably look pretty unpleasant. 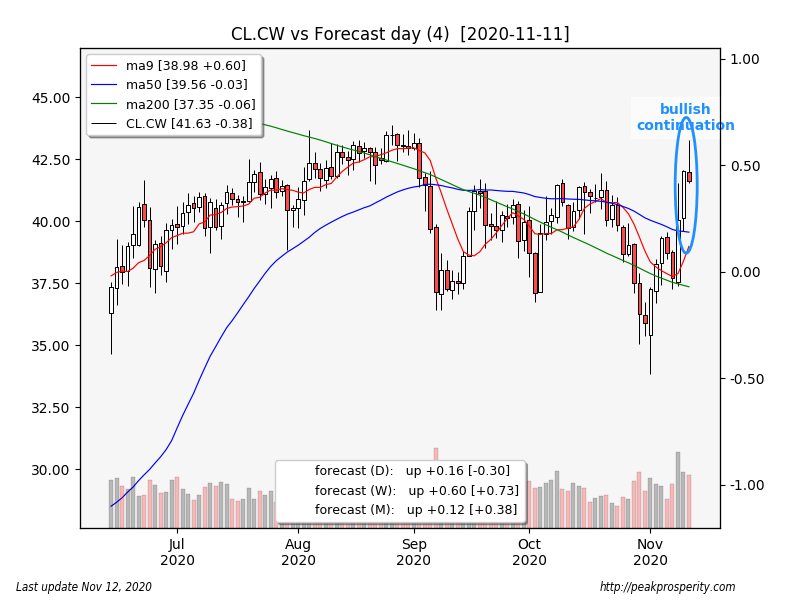 SPX climbed +27.13 [+0.77%] to 3572.66 on moderate volume. The short white candle was a reasonably strong bearish reversal (42%), forecaster dropped, but remains in an uptrend. SPX is in an uptrend in all three timeframes.

Hmm, the candle code really didn’t like today’s print for SPX – that’s a very high rating for a short white. Uptrend remains in place for now, however. 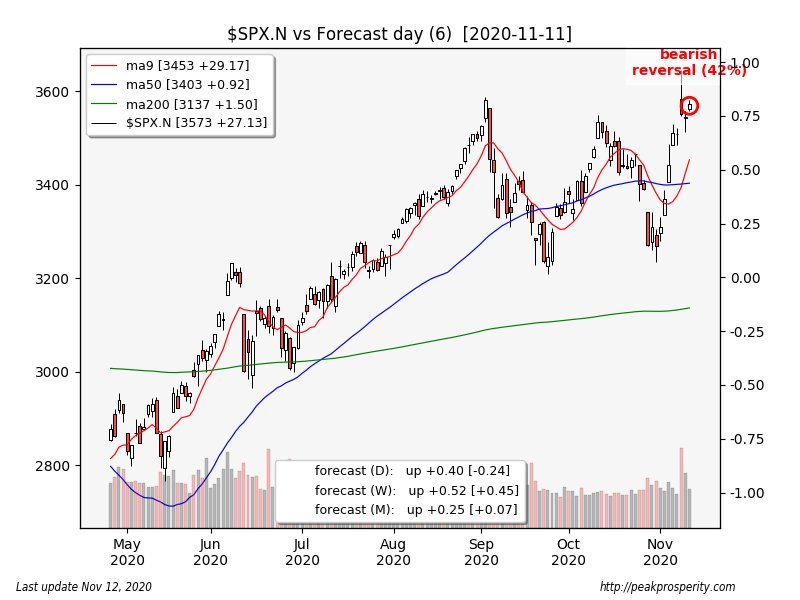 TLT climbed +0.36%. The opening white marubozu candle was neutral, forecaster climbed, but remains in a downtrend. TLT is in a downtrend in both the daily and weekly timeframes. The 30-Year yield rose +2.0 bp to +1.76%.

TY inched up +0.05%. The spinning top candle was a reasonably strong bullish reversal (40%), forecaster dropped, moving deeper into its downtrend. TY is in a downtrend in all three timeframes. The 10-Year yield rose +1.0 bp to +0.97%. 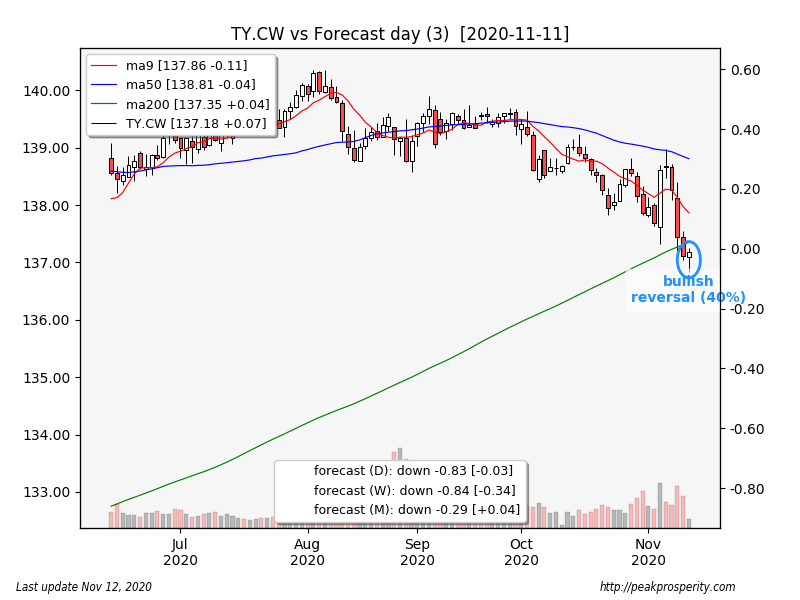 JNK dropped -0.15%. The opening black marubozu candle was a possible bullish reversal (38%), forecaster climbed, moving higher into its uptrend. JNK is in an uptrend in the daily and weekly timeframes.

It was an odd result for what is normally a very bearish candle print. JNK remains near its highs. 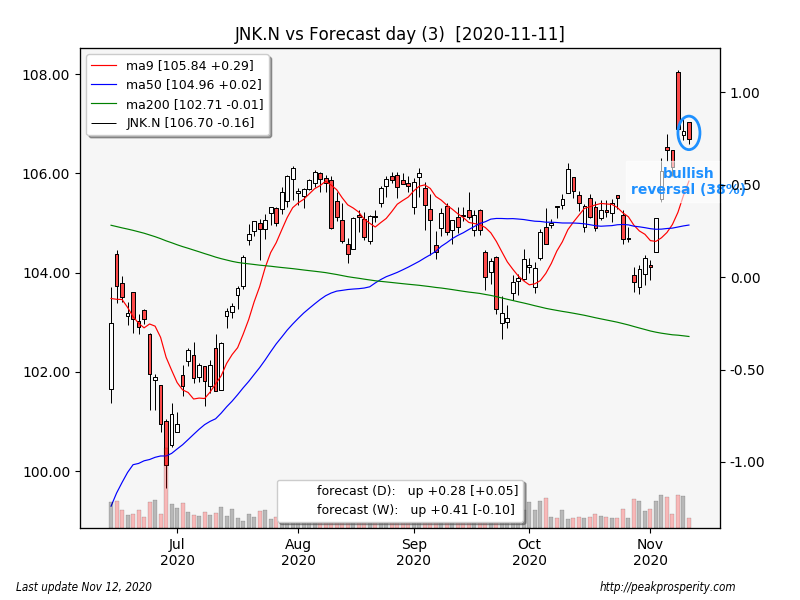 The GLD ETF tonnage on hand was unchanged at +0.00 tons, with 1250 tons remaining in inventory.

Gold and the miners fell, while silver managed to eek out a small gain. With no short-covering, this does not appear to be the low for gold or silver; the miners do look a bit better, and a rally tomorrow would end up printing a swing low, which could actually mark a low.

Risk assets were mixed; equities rallied, while crude, copper, and crappy debt all fell. Still, most items remain quite near their recent highs; the risk asset uptrends remain in place.

The buck is moving higher, but it has yet to really pick a direction.

While the Pfizer vaccine is alleged to be 90% effective, it turns out, so is Hydroxychloroquine when taken as prophylaxis (800 mg starting, 400 mg/week), according to the latest study out of India. Given they aren’t rich, and they aren’t controlled by Pharma, they are free to actually conduct studies on the substance. Which appears to work – as well as that vaccine from Pfizer allegedly works. And it is available today. Assuming Pharma hasn’t outlawed it in your jurisdiction. “To protect you.”

I don’t think this discovery will move markets – the media won’t pick it up. Nobody will care. I mean, I care. You might care. But people in the mainstream won’t see it. The narrative is just that tightly controlled.

With all the election fraud that went on in 2020, does Trump have a chance in an honest recount? Some think so. There are lots of lawsuits happening. Even though the media tells us that the Biden Dogs are excited to return to the White House, that might not be how things turn out after all.

The media, working with the Biden campaign, has tried to make it a fait accompli by shaping the narrative. But this election isn’t over.

If this starts to get legs, it will *definitely* move the markets. I don’t have a timeline, other than mid-December. But I’ll be watching.

I clicked but I don’t see that on their site. Here is what it is showing me:

Is it showing you something different DF?

It was true earlier today when I wrote it.  Maybe they updated it.

I don’t think this is over.  Aside from all the 200 year old people voting in PA, I think there’s something seriously wrong with that computer system.  The impact is, the by-hand recounts may well come up with some dramatically different numbers than the totals provided by the “Biden-glitchy” computer.

With software and parts from the CCP.

Paraphrased from Jason at Sentimentrader.com

With the recent drop in the gold miners, it ended a streak of momentum in those stocks that saw more than 70% hold above their 200 moving averages for 6 months.

This sounds like a bad thing for us goldbugs but actually history suggests its a good thing. Here is what happened to prices over the next year when this situation occurred in the past (I’m posting his 3-month momentum chart because it has a larger sample size of backtesting dates): 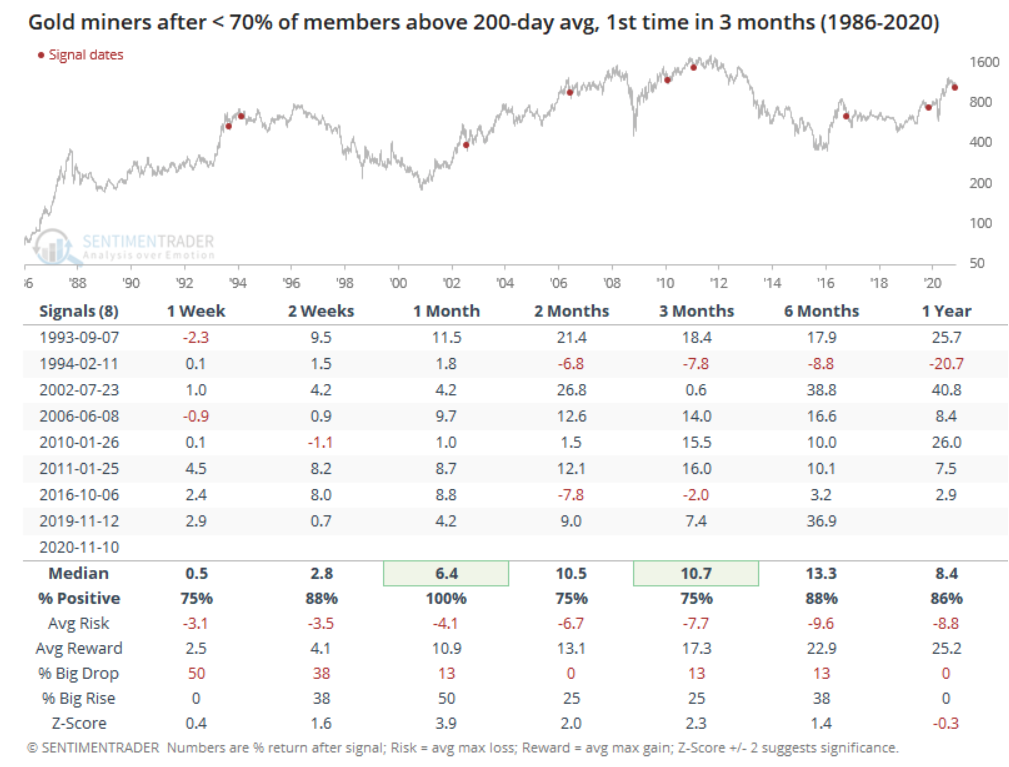 Risk/reward looks pretty good over the next 6 months for the gold miners. Who knew?

I don’t want to pilfer too much from his report but here are some other points from it:

Despite the bloodbath this week, I’ve haven’t sold anything, mainly because my call options don’t expire until 2022. If I had the money I would be buying here for sure.

Good luck and I hope this info helps someone.

Yeah I think we have a swing low in the miners.   I think I’ll (gasp) get some calls.  I think this Trump Presidency isn’t over yet.

And I think this will be a surprise.  The Media has made sure to downplay the fraud for all they are worth, to try and get Biden in on narrative alone.

Can you imagine what happens when the by-hand recount shows Trump is the winner?  And the glitchy CCP computer – in all those states – really did skew the election?

If true, I think the Blue Team’s collective heads will explode.  (Present company excepted).  My facebook feed is full of people saying how they want everyone to hold hands and reconcile.  I have so far refrained from asking what happens if the shoe is on the other foot.

I really thought the narrative approach would work to shoehorn old corrupt Joe into power.  Now I’m thinking … just maybe, it might not.

That’s because fundamentally I think Trump really did win.  And an honest recount will – probably – show this to be true.  I just didn’t think we’d get one.

Amusingly, expiration date for my calls is just after Inauguration Day.

I believed you DF, I just thought the website might be showing one thing to one visitor and another thing to another. That is pretty commonplace these days. How do you think we got so divided as a nation? lol

Edit: What are you going to buy calls on (if you don’t mind sharing)?

Oh just boring old GDX calls.  Most of my stuff is already long.

If the IV had been higher I might have written some naked puts.

Excellent analysis by Lynette Zang on the Fed’s recently released Financial Stability Report, with a look into what’s happening behind the scenes of Stocks and Real Estate (two of the biggest bubbles in existence).