Gold rallied for most of the day, starting in Asia, and topping out at 1:30 pm in the US. It more or less followed the Euro (+0.80%) higher, but the strength of the rally was much more than just about currency. Gold’s swing low (52% bullish) looked quite strong, and forecaster jumped +0.65 to +0.25, which is a strong buy signal for gold. Gold is now back in an uptrend in the daily and weekly timeframe; today’s rally walked back the weekly sell signal. Gold is now also back above both the 9 and 50 MA lines.

COMEX GC open interest rose +2,465 contracts. It will be interesting to see just how much short covering happened today – although we will need to wait for next week before we can know. 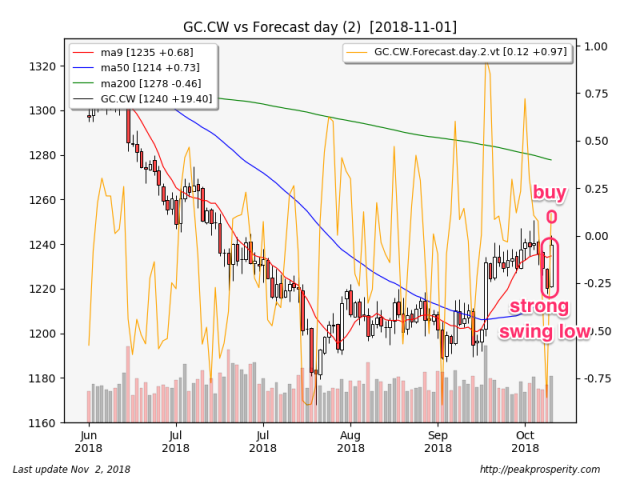 Silver started its rally around 2:10 am, eventually topping out around 1:30 pm. Silver’s swing low was very strong (67% bullish), and forecaster jumped +0.65 to +0.23, which is a buy signal for silver. Silver is now back above both the 9 and 50 MA lines, however it has yet to break above its recent trading range. Silver’s rally today caused both weekly and monthly to unwind their sell signals, moving silver into an uptrend in all 3 timeframes.

The gold/silver ratio plunged -1.62 to 83.61. That’s very bullish; the current level for the ratio suggests PM could be at or near a long term low. When PM starts to rally in earnest, we should see many days just like today. 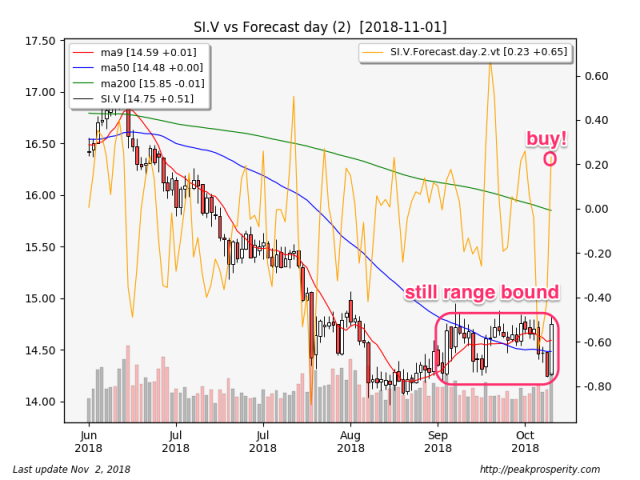 Miners gapped up at the open, and rallied strongly through about mid-day. GDX climbed +3.38% on heavy volume, while GDXJ rose +3.00% on very heavy volume. XAU did much better, up +4.53%. Candle print for XAU was a very strong swing low (67% bullish), and forecaster jumped +0.60 to +0.14 which was a buy signal for XAU. XAU is now back above both the 9 and 50 MA lines. The rally was enough to trigger a buy signal for the monthly (November) forecaster too, putting XAU in an uptrend in both the daily and monthly timeframes. 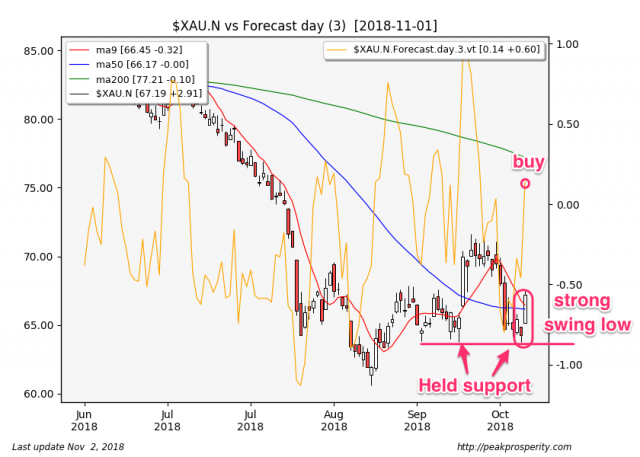 Platinum rose +2.76%, palladium climbed +1.35%, while copper moved up +2.47%. Given the timing of the move, my sense is that the news about either the Brexit negotiations and/or Trump’s call with Xi leaked perhaps 12 hours before the public release took place, and in-the-know traders started buying in advance in the futures markets. That’s just a guess, of course, but otherwise I don’t see a good explanation for the strong rally that started well before any interesting news hit the wires. At least that I saw anyway. 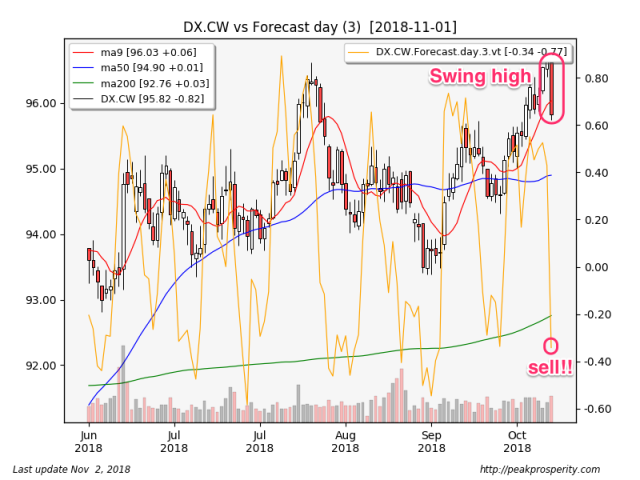 Crude fell -1.36 [-2.09%] to 63.62, falling below support, making a new low, and generally looking very weak. The long black candle was a bearish continuation, and CL forecaster fell -0.24 to -0.69, which is a very strong downtrend. Crude remains in a downtrend in all 3 timeframes. A new article at oilprice suggests why: EIA released US oil production data for August, that shows US production increased 416 kbpd, making the US the largest oil producer in the world, at 11.346 mbpd. In addition, the US has granted Iran oil import waivers to India and China, putting a cap on the impact of sanctions, and both Saudi and Russia have increased production in anticipation of sanctions. And of course the US chose this moment to sell oil out of the SPR, just ahead of the midterms. That explains the $12 drop in oil over the past month or so. Usually the news does come out, eventually.

SPX moved up +28.63 [+1.06%] to 2740.37, closing near the highs of the day. The closing white marubozu was a bullish continuation, and forecaster rose +0.17 to +0.53. SPX monthly also issued a tentative buy signal, although it is a long way to the end of November. Still, SPX is now in an uptrend in both daily and monthly timeframes.

TLT dropped -0.15%, curiously doing a bit better than expected given the sell-off in the buck and the overall risk on mood. TY actually rallied, up +0.11%, with TY forecaster remaining in a downtrend. TY remains in a downtrend in both daily and monthly timeframes. The 10-year yield fell -1.5 bp to 3.14%.

JNK fell -0.11%, a surprising outcome given how much risk-on mood there was in other sectors. Still, JNK remains in an uptrend after yesterday’s buy signal.

Today seemed to be about BRExit and China. We got a small taste of what will (probably) happen when the tariff situation gets solved, namely, a strong metals and general commodity rally that will anticipate the animal spirits returning to China, as well as the worry/overhang vanishing from the continent regarding BRExit.

The only fly in the ointment (and there always seems to be one) is crude oil. Is the plunge in price just about manipulation of gas prices ahead of the midterms? I sure wouldn’t put it past Trump to do that. It could also be some temporary oversupply along with a worry about a global economic contraction. Certainly there aren’t any technical signals suggesting a low might be in.

Let’s hope for good news on tariffs by the G-20 meeting in Argentina. It should be quite gold-positive, if/when it actually happens. It might be even better for silver. FCX, a huge global copper miner, was down 40% from its June levels; it has bounced about 15% in the past week or so. That’s not a recommendation – just an example of the discounts in resource sector equities which will rapidly vanish if/when a tariff deal gets signed with China.