Gold just chopped sideways today in a narrow range. The doji candle was a bullish continuation, and forecaster moved higher into its mild uptrend. Not much happened today in gold; it remains in an uptrend in all 3 timeframes.

Futures are projecting an 83% chance of a rate cut in October, a 92% chance of one rate cut in December, and a 44% chance of two rate cuts. That’s a reasonably large increase – possibly due to the FOMC minutes released today. I didn’t see anything revolutionary in the notes, but maybe others did. 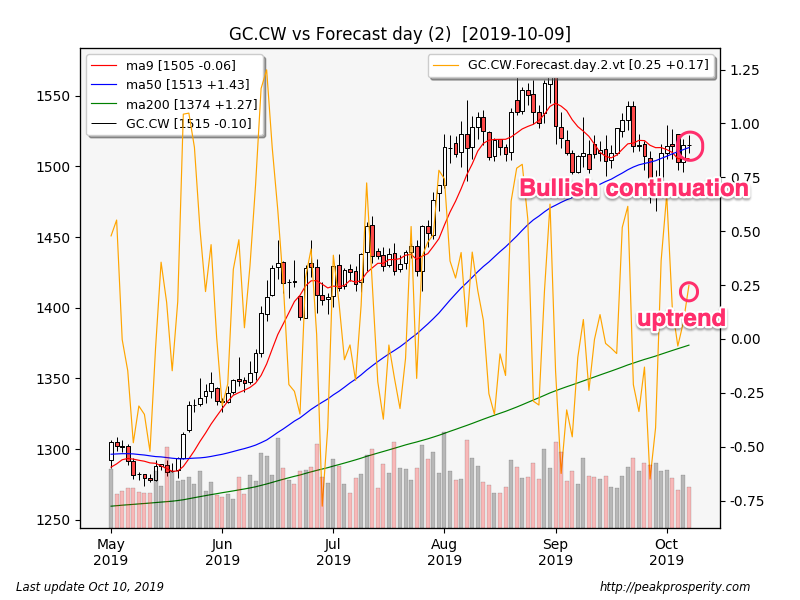 Silver tried to rally late in Asia, but reversed fairly quickly, ending the day almost unchanged. The doji candle was a bullish continuation, and forecaster inched higher into its uptrend. Silver remains in an uptrend in all 3 timeframes. 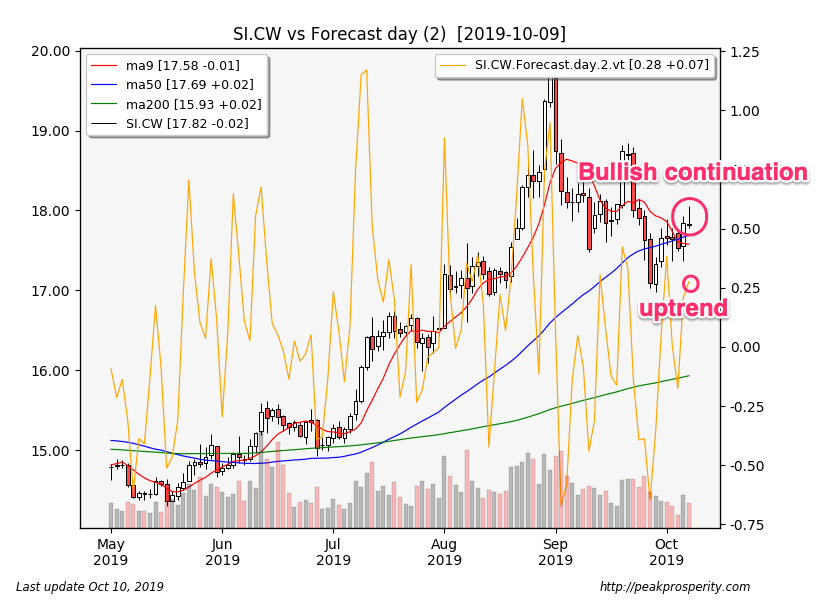 Miners sold off today; GDX dropped -1.09% on moderate volume while GDXJ fell -1.75% on very light volume. XAU moved down -0.97%, the long black candle was a bullish continuation, and forecaster fell, but remains (just barely) in an uptrend. Today’s drop pulled the weekly forecaster back into a downtrend; XAU is now in an uptrend in just daily and monthly timeframes. 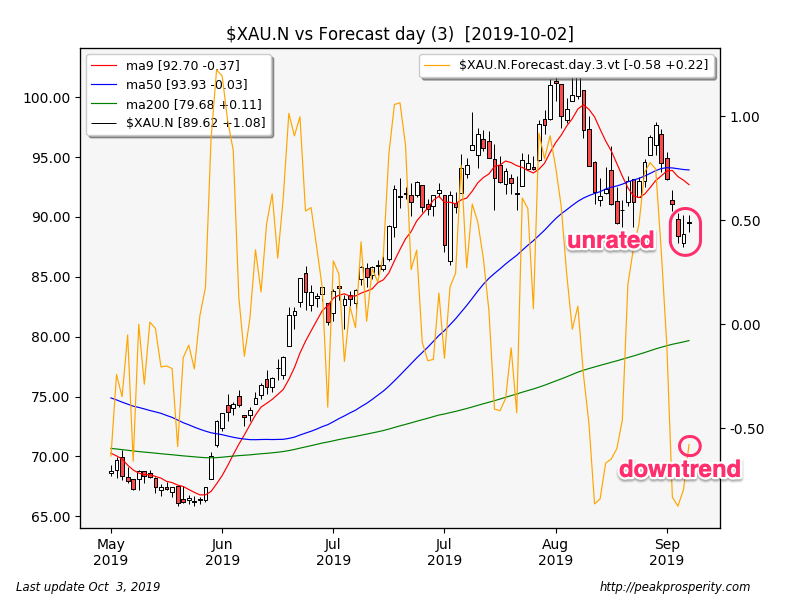 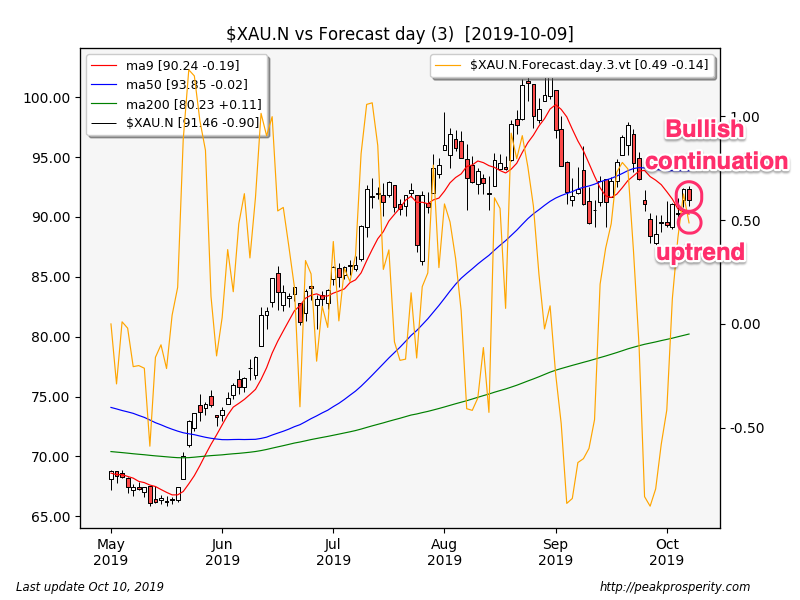 Platinum rose +0.31%, palladium climbed +0.44%, while copper fell -0.10%. No real direction yet for the other metals – copper chopping sideways near the lows, platinum doing the same in the middle of its range, while palladium is moving slowly towards another new high.

The buck inched down -0.01 [-0.01%] to 98.69. The spinning top/NR7 candle was unrated, and forecaster inched higher into its uptrend. The buck remains in an uptrend in both daily and weekly timeframes.

Crude moved up +0.06 [+0.11%] to 52.60. Crude tried to rally today but largely failed; the EIA report (crude: +2.9m, gasoline: -1.2m, distillates: -3.9m) was mixed, and it was hard to say if the market liked it or not. The doji candle was neutral, and forecaster inched higher, bouncing back into a slight uptrend. Crude remains in a downtrend in all 3 timeframes.

SPX jumped +26.34 [+0.91% to 2919.40. Most of today’s move came in the futures markets overnight. The short white/spinning top candle was neutral, and forecaster inched higher, moving back into a very slight uptrend. SPX is now in a downtrend in the weekly and monthly timeframes.

CRB fell -0.15%; 4 of 5 sectors rose – I’m not sure how that led to the overall CRB falling. Probably different closing times.

So SPX did well, and bonds did poorly. That’s about it for excitement today.  These moves were a bit surprising given the increase in rate-cut chances.

Regarding the US-China trade deal, Trump thinks that China wants a deal more than the US at this point. Talks between the top people start tomorrow. How this turns out – it is really hard to say. Certainly if China signs up to a comprehensive deal, it will surprise me, given the fact that this week the US placed several Chinese tech companies on blacklists, as well as the visa restrictions placed on Chinese security officials deemed responsible for Xinjiang human rights violations. Unlike last time, Trump isn’t going into these talks “soft”. If China signs up to something, I suspect they will only do so if for internal reasons they feel they have no choice.

Reading the tea leaves, it looks as though decoupling is becoming more and more real as time passes.

That’s due to Hong Kong, I suspect. Bad idea, that “extradition law” was.

They are about to get smoked.  Trade deal and Brexit getting solved?  They are going to pound PMs back to the stone age.

They are about to get smoked. Trade deal and Brexit getting solved? They are going to pound PMs back to the stone age.

Great news!  I’ve been wanting to add to my holdings but have been reluctant up to now due to the elevated prices.  How soon do you think this will happen and what kind of drop can we expect?

Yes that certainly is my thesis – but I was a bit surprised to see how well the miners did yesterday.  Maybe good earnings or something.

And that SPX rally wasn’t all that.  It looked a little bit feeble.

Bonds certainly weren’t happy, and they tend to move along with gold these days.

We will just have to see when the buyers show up for the metals.

Support should be around 1460, the breakout point for the most recent rally.

And that trade deal might not be all that exciting.  Maybe just something interim.  That’s what I’m reading anyway.  Just something from China to keep Trump from dropping those 25% tariffs on their heads.