Market-moving news: the US placed sanctions on 3 of China’s facial recognition companies. NYT provides the summary:

SHANGHAI — The world has largely sat by for nearly two years as China detained more than one million people, mostly Muslims and members of minority ethnic groups, in internment camps to force them to embrace the Communist Party.

Now, the Trump administration is taking the first public steps by a major world government toward punishing Beijing. In doing so, it is opening up a new front in the already worsening relationship between Washington and Beijing: human rights and the dystopian world of digital surveillance.

The move by the US seemed to be the cause of all the fuss in the markets today. Will there be a trade deal? My sense is, it is looking much less likely. Trump may be on the edge of determining that China will end up being an adversary, and the US would be better off moving its industry elsewhere.

It is entirely possible that China’s actions over the past four months in Hong Kong may have changed people’s view on the CCP. “Hey, didn’t they sign an agreement not to mess with Hong Kong until 2047?”

Gold started its rally after the Asia session closed, retreated a bit after the New York open, and then moved higher through end of day. The long white candle was neutral, and forecaster inched higher, moving back into an uptrend. The rally was enough to pull the weekly back into an uptrend as well; gold is now back in an uptrend in all 3 timeframes.

Futures are projecting a 72% chance of a rate cut in October, an 83% chance of one rate cut in December, and a 38% chance of two rate cuts. That’s a fairly sharp decrease from last Friday. 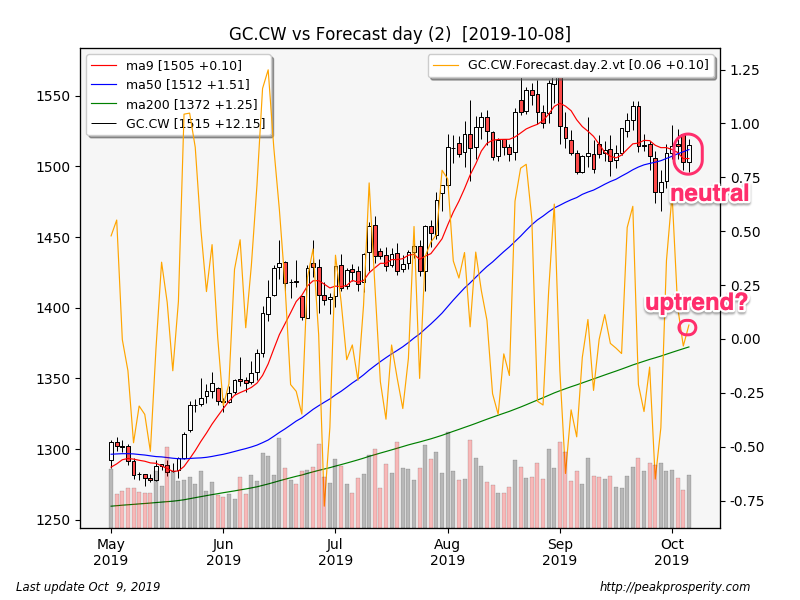 Silver dipped a few times in Asia, then started rallying after Asia closed, ending the day near the highs. The confirmed NR7 was bullish (50%), and forecaster moved back into an uptrend. Silver is now back in an uptrend in all 3 timeframes. 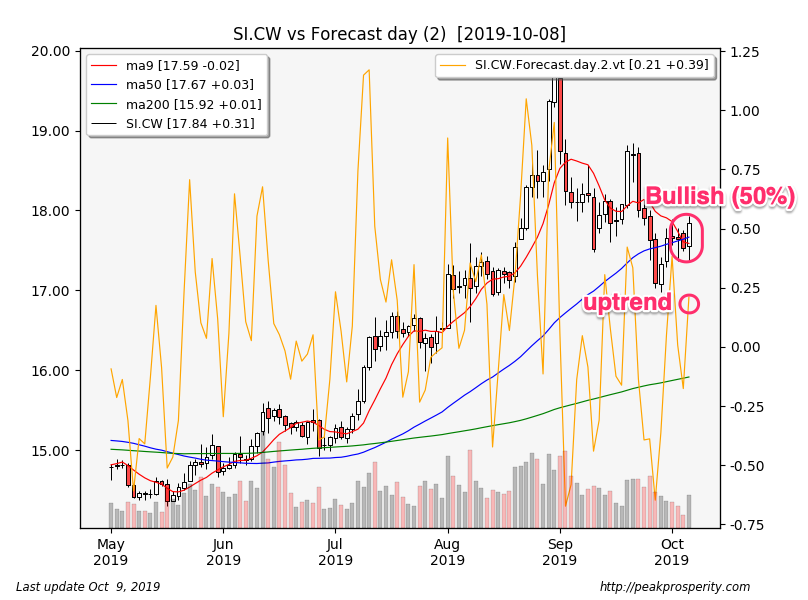 Miners gapped up at the open, fell during the first 30 minutes, then rallied for the rest of the day, closing at the highs. GDX rallied +2.83% on heavy volume, and GDXJ climbed +2.87% on moderately heavy volume. XAU moved up +2.29%, the short white candle was a bullish continuation, and forecaster moved higher into its uptrend. Today’s rally was enough to pull the weekly forecaster into an uptrend – XAU is now back in an uptrend in all 3 timeframes. 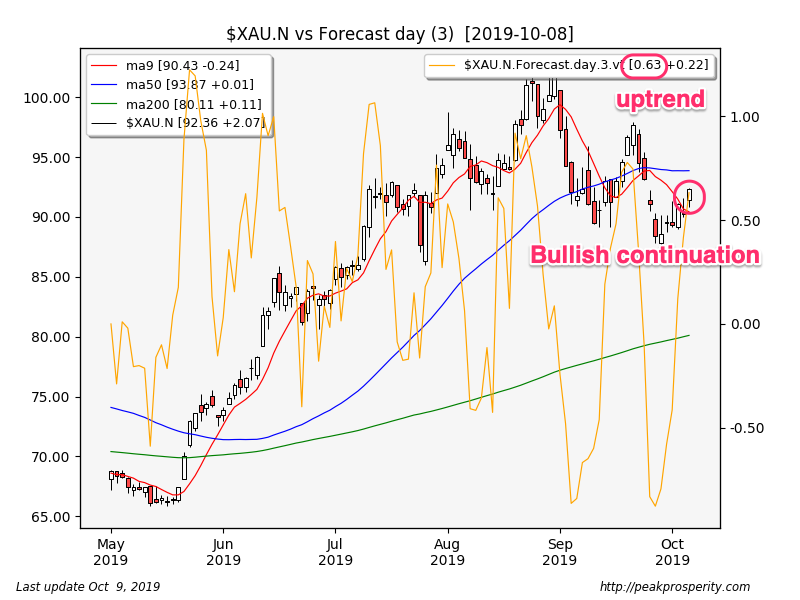 Platinum rose +1.33% palladium jumped +0.79%, while copper dropped -0.39%. That looks like a possible resumption in the PM bull move, alongside some issues with China.

The buck moved up +0.15 [+0.15%] to 98.70. The long white candle was a bullish continuation, and forecaster moved into an uptrend. The buck is back in an uptrend in both daily and weekly timeframes.

Large currency moves include: GBP [-0.78%]. Looks like a no-deal Brexit is back on the table.

It looks as though the EU and Johnson are both working overtime to establish which party is to blame for the lack of a deal, as we move closer to the “must request an extension” deadline of October 19th. The possibility of a near-term extension, followed by an “Iron Curtain Brexit” is now the “main scenario” of Euro Intelligence, a pro-EU think tank. How would that happen?

Extension request is made October 19th per the Benn Act, and a “long extension” is then granted by the EU. A new election is then held in the UK, with the Tories claiming that the EU and the Remainers collaborated to undo the referendum,alleging interference in the UK’s internal affairs. Tories presumably win the election, and promptly execute a departure from the EU immediately after the election with no deal.

Crude fell -0.17 [-0.32%] to 52.54. Crude moved lower during the London session, and then bounced back somewhat during trading in the US. The long legged doji was a bit bullish (37%), but forecaster edged lower, dropping into a downtrend. Crude is back in a downtrend in all 3 timeframes.

SPX fell -45.73 [-1.56%] to 2893.06. Much of the losses happened in the futures markets overnight. The confirmed shooting star was bearish (43%), and forecaster moved down into a still-mild downtrend. SPX remains in a downtrend in all 3 timeframes.

JNK plunged -0.40%, the confirmed bearish doji was somewhat bearish (39%) and forecaster moved into a downtrend. Today marked a new multi-week closing low for JNK. AA.AAA differential moved fell -1 bp to +92 bp. It looks like there might be some mild worries about junky debt right now.

The blacklisting of the Chinese companies is not something I saw coming.  Is this just Trump getting leverage ahead of the talks, or is this the real deal?  I have no idea.  How much is Hong Kong contributing to the mix?  Certainly the desire for Chinese money has been causing allegedly “progressive” US franchises to grovel pathetically at the feet of the CCP whenever anyone in their organization happens to criticize China [https://www.msn.com/en-us/news/politics/nba-sparks-anger-with-apology-to-china/ar-AAIqIrc] but I get the sense that might actually be coming to an end.

Ultimately, do Chinese Lives in Hong Kong matter as much as Black Lives?  So far, the answer is no.  If that changes…then what

No trade deal, that’s what.  And that’s distinctly gold positive. If Blue Church (CNN/MSNBC/Blue Establishment) decides to get behind decoupling – and it might have no choice – things could really start getting interesting.

It really could happen.

Oh, and one more thing.  Friend reminded me: Fed is buying bonds again.  But please, whatever you do, don’t call it QE4.