Gold rose +2.64 [+0.22%] to 1206.78 on heavy volume, while silver dropped -0.04 [-0.31%] to 14.62 on moderately heavy volume. The buck was unchanged; the real action today was in crude, equities, and bonds once again. Apparently, Powell’s statement that the US was still “far from neutral” with respect to short term rates continues to reverberate.

Gold rallied along with the Euro, peaking out around 10:30 am, and then retreated, losing most of its gains. The high wave candle was actually bullish, and forecaster ticked up +0.03 to -0.02, which is right on the edge of a buy signal. Gold remains in a downtrend in all 3 timeframes, but GC/EUR is in an uptrend in all 3 timeframes. That tells us there are buyers for gold over in Europe, which is a positive sign, and that gold’s failure to rally in USD is probably just a currency effect.

COMEX GC open interest rose 7,401 contracts. That looks like the shorts are back again in gold. 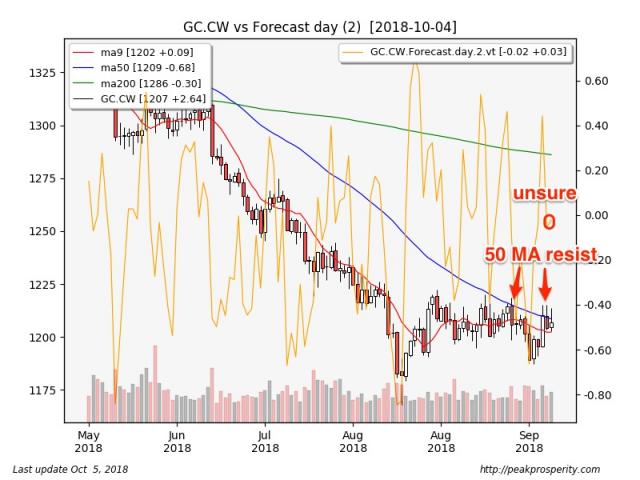 Silver fell in Asia, rallied during London, peaking out around 9 am, and then falling along with the Euro, losing all its gains and then some. The high wave candle was neutral, while forecaster dropped -0.17 to -0.13, which is a sell signal for silver. Silver remains in an uptrend on the weekly, but is now in a downtrend in both the daily and monthly timeframes. That suggests silver isn’t quite sure where it goes next.

The gold/silver ratio rose +0.40 to 82.32. That’s bearish, and the current level for the ratio suggests PM could be at or near a long term low. 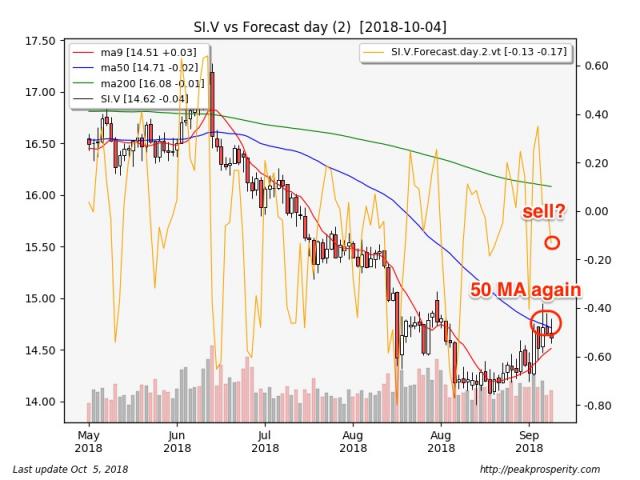 Miners tried to rally, failed, then bounced back a little; GDX fell -0.21% on heavy volume while GDXJ rose +0.32% on moderately heavy volume. XAU dropped -0.33%, printing a weak-looking swing high (50% bearish reversal), which took the forecaster down -0.27 to +0.24, which is still an uptrend for XAU, although it is slowing.  XAU remains above its 9 MA, and it also remains in an uptrend on both the daily and monthly timeframes – slightly more bullish than silver. 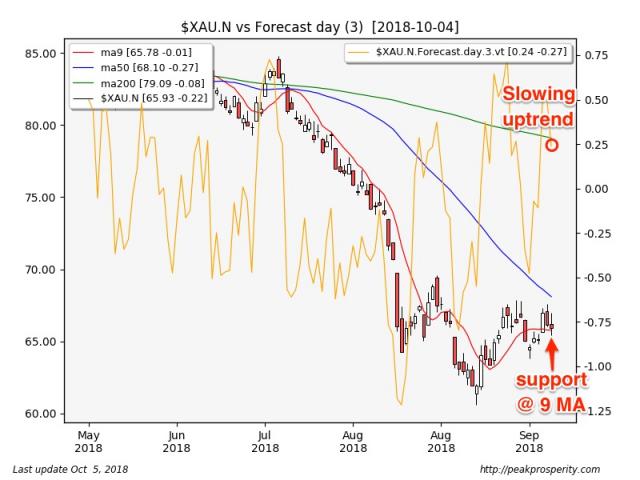 Platinum fell -0.23%, palladium dropped -0.31%, while copper plunged -1.72%. The big move in copper was enough for copper daily to issue a sell signal, as did platinum too. Palladium is already in a downtrend. The other metals are hinting at a broader reversal here.

After gapping up at the open, the buck sold off for most of the day, bouncing a bit at 10 am, ending the day unchanged at 95.32. The long black candle was mildly bearish (33%), but forecaster moved up +0.08 to +0.64, which is a strong uptrend. The buck remains in an uptrend in both the daily and monthly timeframes.

Crude plunged -1.45 [-1.92%] to 74.53, a large move down. The plunge started around 8am, and didn’t stop until the afternoon, roughly 1:30 pm. One possible cause: The US State Department issued a statement accusing OPEC of “hiding” 1.42 mbpd of spare capacity. At the same time, Reuters reported that Russia and the Saudis agreed privately to increase production; the reason for the private agreement was allegedly because they didn’t want to be seen acting on Trump’s orders. It is a complicated dance for Russia & Saudi: keep prices high enough to incentivize oil companies to explore, but not so high so as to throw the world into recession, while at the same time hosing Iran, which is a Russian ally and the Saudi arch-enemy. How do they keep it all straight in their heads?  https://www.reuters.com/article/us-russia-saudi-oil-exclusive/exclusive-saudi-arabia-russia-agreed-in-september-to-lift-oil-output-idUSKCN1MD0Y8

The plunge in oil printed a bearish engulfing (42% reversal), and the forecaster plunged -0.49 to -0.16, which is a sell signal for crude. Crude remains above its 9 MA, and in an uptrend on both the weekly and monthly timeframes.  This could just be another buying opportunity; crude seemed to find support at the 9, as it has for the last month or two. 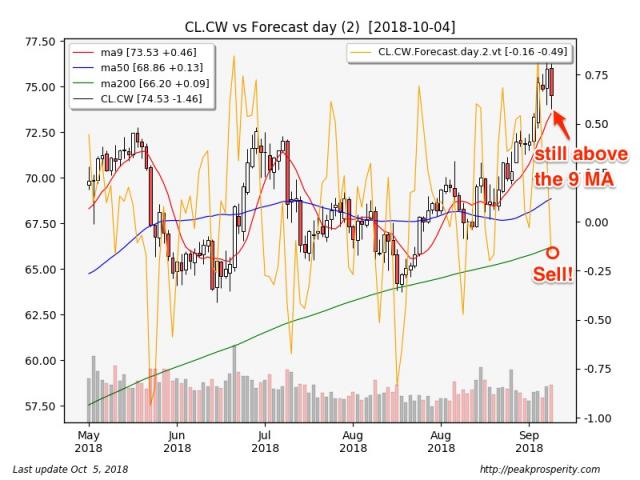 SPX fell -23.90 [-0.82%] to 2901.61. The plunge took SPX convincingly through its 9 MA, even though SPX managed to bounce around 20 points in the last few hours of trading. Candle print was a bear strong line/swing high (60% reversal) – with the swing high being very highly rated. Forecaster plunged -0.40 causing SPX forecaster to issue a sell signal. SPX remains in an uptrend in both the weekly and monthly timeframes. For now at least. Another day like today and we probably see a sell on the weekly.

Sector map has tech doing worst (XLK:-1.80%) along with cyclicals (-1.57%) and communications (-1.43%), while financials did best (XLF:+0.68%). This was a bearish sector map; the selling was probably caused by the Bloomberg report on China infecting the US server supply chain with malware/hardware which gives the Chinese Army effective control over every server and device so “equipped” by the subcontractor in China.

Sure, let’s outsource all of our computer hardware manufacturing to the other superpower, in order to save a few bucks on labor costs, and then let’s use it as the core computing infrastructure for our economy. What could possibly go wrong?  Sometimes, “free trade” isn’t so free. 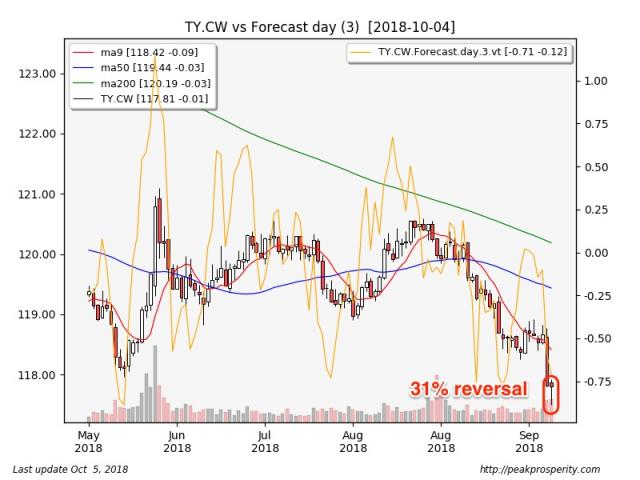 JNK cratered along with TLT, plunging -0.45%, making a new low, pulling the forecaster even deeper into downtrend. With crude, equities, and bonds dropping, that makes JNK really unhappy – JNK is now clearly signaling risk off.

CRB plunged -1.21%, with 4 of 5 sectors moving lower, led by energy (-2.03%). That was all about the plunge in crude. This was a fairly dramatic swing high in the CRB; I don’t have a data source for it though, so my code can’t assess the reversal probability. It looks pretty ugly, but direction more or less depends on what happens next to crude – which remains in an uptrend in the longer term timeframes.

Its always something that is not on the list that ends up hitting the market. Cue Chairman Powell of the Fed who suggested that a cyber attack could be the cause of the next downturn in the economy. I’m sure he was plugged in to what was about to be released. This wasn’t just some random comment from a random guy trying to entertain his audience. I’m guessing that, behind the curtain, they are very, very worried about just how badly infected our computing infrastructure is. It is effectively a giant “off” switch for every server so equipped – and for all of the servers that trust the infected server. (i.e. if China owns the hardware of a web server that can write to the company’s core database – the infected web server can then dutifully corrupt the database). See Powell’s interview below, starting at 15:30 – 16:50. I had to include his joke; it was actually pretty funny.

The vulnerability of our national computing infrastructure is another reason to have cash, gold, and food. Just in case things go south unexpectedly.

And we might consider bringing all that computing assembly back home. Let’s pay a little more, and avoid the totally predictable “China risk.”  Otherwise, we’re just utterly short-sighted idiots.

I guess there’s plenty of evidence for that level of egregious stupidity all across society, but since this just happens to be my field, I’m especially annoyed about it.  Its all fun and games until someone pokes out YOUR eye…