The big driver in the market today was the FOMC announcement, followed by Powell’s press conference at 2:30 pm. Predictably, the Fed dropped rates 25 bp, and then suggested the rate cut program was probably at an end.

According to the Fed, the labor market is strong, economic growth is moderate, household spending rising at a strong pace. Business investment is weak, as are exports, and inflation (at least measured by the government) is running below their 2% target. [Presumably the Fed pays for their health insurance so they can pretend not to notice].

For me, the important part of the press conference came when Powell was asked about the repo market events (at 23:11 into his press conference, link below). Powell said the Fed was puzzled by the banker’s refusal to lend their excess liquidity into the repo market. “Liquidity didn’t seem to flow as one might have expected. We surveyed the banks carefully about what was their lowest comfortable level of reserves, and many banks that were well above that level did not take that excess cash and invest it in the repo market at…much higher rates. They didn’t do that. The question is why?”

Well. My goodness. Why on earth might bankers be nervous – what with all the funds in the UK failing due to illiquid securities and “runs on the fund”, and the historically high levels of really crappy debt out there? Powell: subject needs some serious study. Top men are working on the problem. Ok he didn’t use those exact words, but … more or less that’s what he said. “Forensic work is going on.”

This smoking-gun-room-elephant was then entirely ignored by the rest of the reporters, who should have been on Powell like hyenas on a fallen gazelle. You can be sure if Trump were running the Fed, they’d have savaged him horribly.

But no. It wasn’t an official denial, it was more of “official puzzlement” about a situation which hasn’t happened for 10 years, and certainly appears quite serious. And the media let Powell’s “I have no clue” response pass without comment.

Gold rallied into FOMC, plunged immediately following the announcement at 2 pm, and then rallied sharply 10 minutes into Powell’s press conference, regaining all the losses and then some. The long white candle was quite bullish (50%) and forecaster jumped higher but remains in a modest downtrend. The rally was enough to pull gold weekly back into an uptrend; gold is now in an uptrend in both weekly and monthly timeframes. Gold/Euros remains in a downtrend in both daily and weekly timeframes.

Futures are projecting a 17% chance of a rate cut in December. 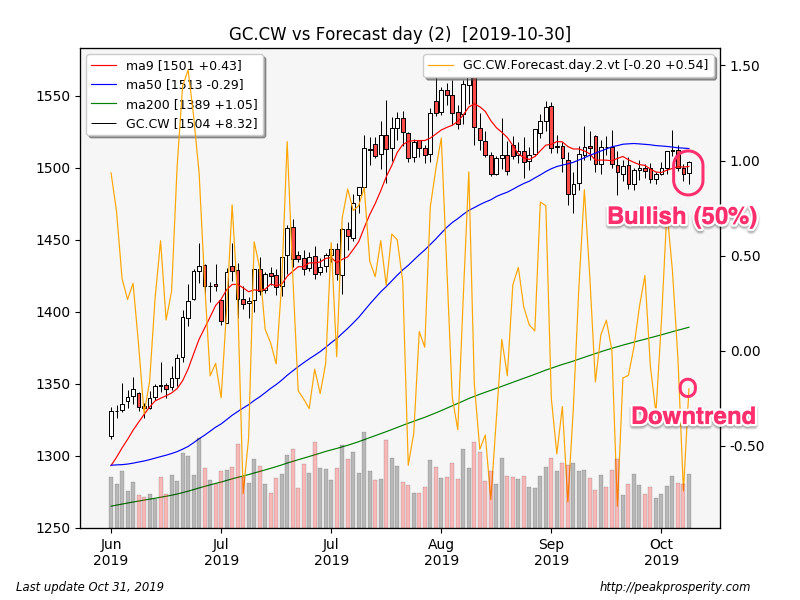 Silver followed gold – first down at 2pm, and then back up again at 2:40 during the press conference. The high wave candle was neutral, and forecaster moved higher and is now in a no-trend state. Silver remains in an uptrend in both weekly and monthly timeframes. 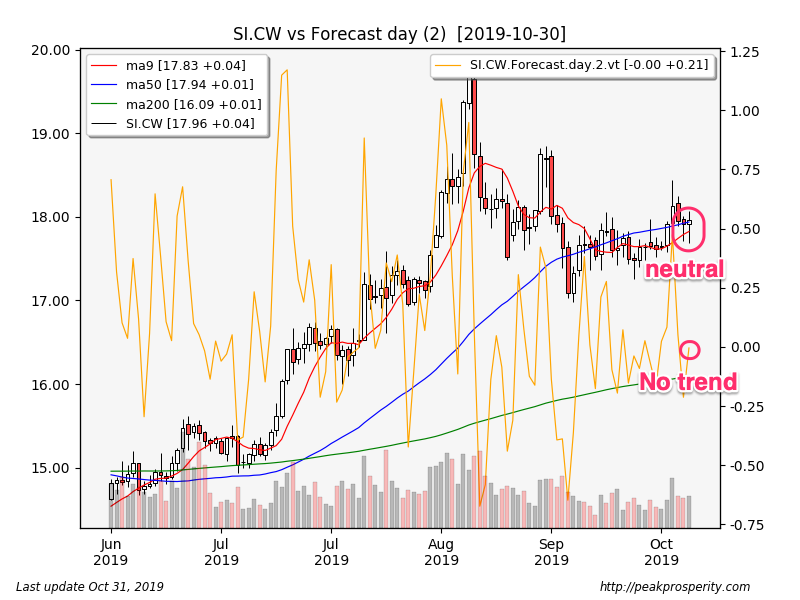 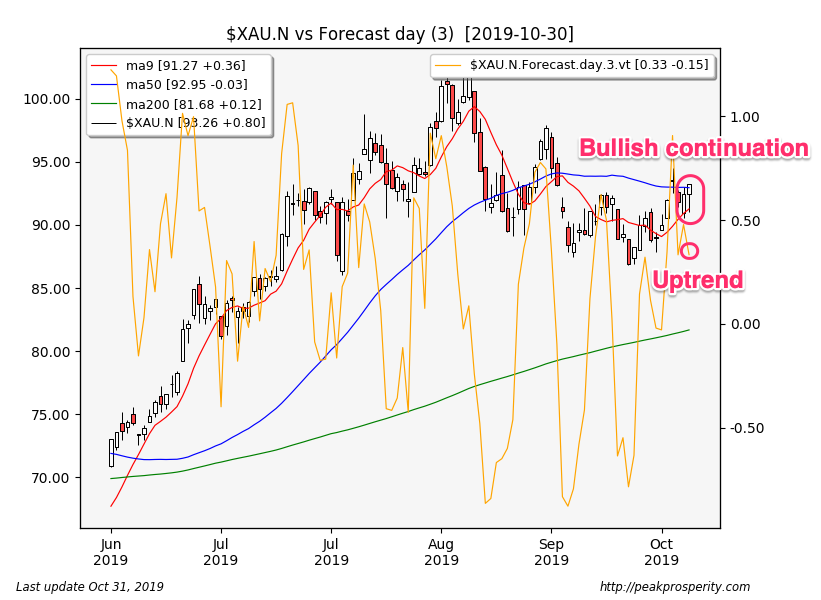 The buck moved down -0.03 [-0.03%] to 97.22. The bullish doji star was bullish (43%) but forecaster inched lower leaving the buck in a no-trend state. The buck remains in a downtrend in both weekly and monthly timeframes.

Crude dropped -0.68 [-1.22%] to 54.96. The long black candle was a bearish continuation, and forecaster dropped deeper into downtrend. Crude is now back down below all 3 moving averages, which is bearish. Crude remains in an uptrend in both weekly and monthly timeframes, however that monthly uptrend is fairly weak.

In the unintended consequences department: in order to hedge the possibility that Sanders/Warren might be elected President (both have said they would “ban fracking” – possible via executive order on Federal lands, but more difficult on private land without an Act of Congress), some shale drillers have accelerated drilling on Federal lands.

SPX rose +9.88 [+0.33%] to 3046.77. This was another new all time high for SPX. The spinning top candle was a bullish continuation, and forecaster moved higher into what is now a moderate uptrend. There is often a certain momentum once prices break above a previous high – disciplined shorts cover, and that causes even more buying, which causes prices to rise even more. That may be what is going on now. SPX remains in an uptrend in all 3 timeframes.

VIX plunged -0.87 to 12.33. This is the lowest VIX reading in 2 months. This does mean that puts are pretty cheap right now.

JNK fell -0.11%, the long black candle is a bearish continuation, and forecaster plunged into a downtrend. Over the last two days, JNK is definitely not supporting the “risk on” equity market mood. Is something “special” happening in junky debt land? Perhaps – traders are becoming concerned about illiquid, crappy debt and they are getting out before things go bad? Hmm. [I have no position]. BAA.AAA differential remained at +93 bp. Credit concern remains modest at best.

Well, you really have to like what gold, silver, and the miners did during the Powell press conference. Even though the market is assuming there will be no rate cuts, PM rallied fairly briskly. Miners are looking the strongest of all the PM components, and since they tend to lead, I take this as a positive sign.

Was it was something Powell said in that press conference at roughly 14:41, give or take. It wasn’t a monster spike, just a turn in momentum at that point in time. I didn’t hear anything earthshaking, but what do I know?

As was probably obvious from my earlier comments, for me the interesting stuff was about that “puzzling” lack of enthusiasm by the banksters to loan money to “someone” in the overnight markets. Top men are working on sussing out the details. And I’m sure they will get back to us real soon.

And now we see JNK dropping on a “risk on” day. Not sure it means anything. But … that 5.6% yield (although expense ratio: 0.47%…ouch), average 6 year duration. That’s roughly 360 bp above the 5-year treasury (at 1.61%). At least the managers of JNK aren’t required to sell if investors get nervous and flee. Not like open-ended funds.

We will have to see if this trend continues.

I was wondering when China would start campaigning against Trump.  Here’s the first shot.

In private conversations with visitors to Beijing and other interlocutors in recent weeks, Chinese officials have warned they won’t budge on the thorniest issues, according to people familiar with the matter. They remain concerned about President Donald Trump’s impulsive nature and the risk he may back out of even the limited deal both sides say they want to sign in the coming weeks.

The funny thing is, they were all ready to sign last May.  There was none of this sort of talk.  And then something happened on the way to the altar, and now…boy.  Things just don’t seem to be working out any longer.

If Trump does get re-elected, the US-China trade situation could get pretty unpleasant.

Then there is Xinjiang, which the US Congress has suddenly noticed is full of concentration camps, and then there is this Hong Kong protest movement.