Gold chopped sideways until the ISM report came out at 10 am; gold shot up $20, but then retreated over the remainder of the day. The shooting star candle was bearish (43%), but forecaster moved higher into what is now a reasonably strong uptrend. Gold remains in an uptrend in the daily and monthly timeframes. If this is just a reaction rally in a downtrend, this could be the last day of upward movement.

Futures are projecting an 86% chance of a rate cut in October, a 94% chance of one rate cut in December, and a 51% chance of two rate cuts. Rate cut projections continue to increase. 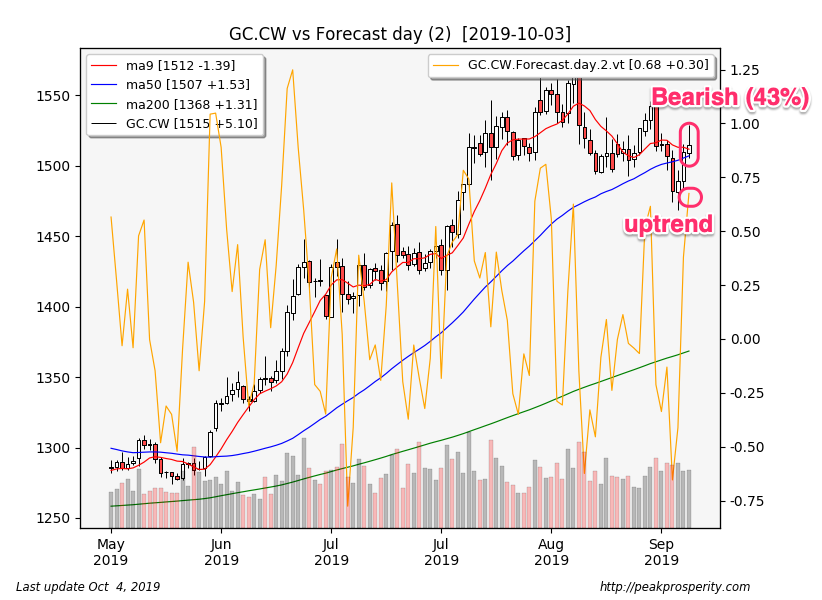 Silver also chopped sideways until the ISM report; it jumped 20 cents after the report came out, then spent the rest of the day selling off. The doji star candle was bearish (42%), but forecaster moved higher into its uptrend. Silver remains in an uptrend in all 3 timeframes. 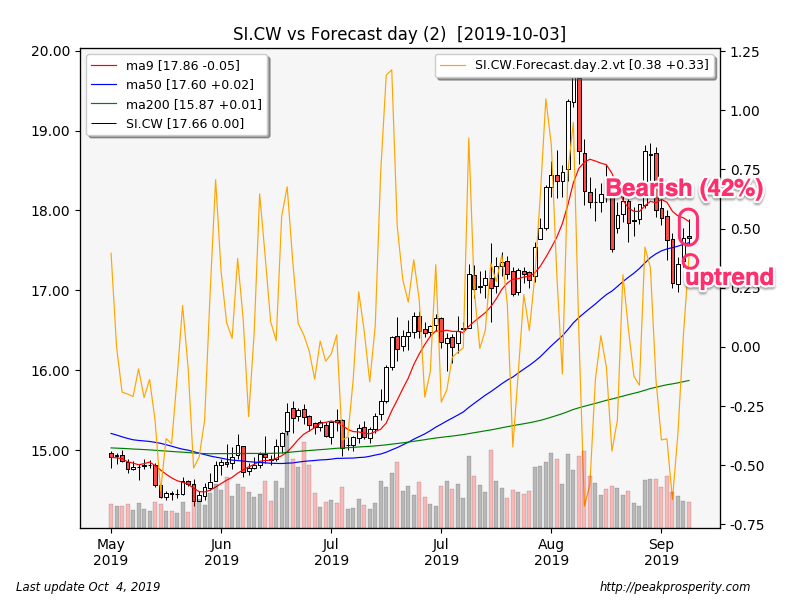 Miners jumped higher following the ISM report, then sold off for the rest of the day. GDX fell -0.58% on heavy volume, while GDXJ dropped -0.37% on moderate volume. XAU fell -0.33%, the shooting star candle was actually a bullish continuation, and forecaster moved higher but remains in a reasonably strong downtrend. XAU remains in a downtrend in both daily and weekly timeframes. 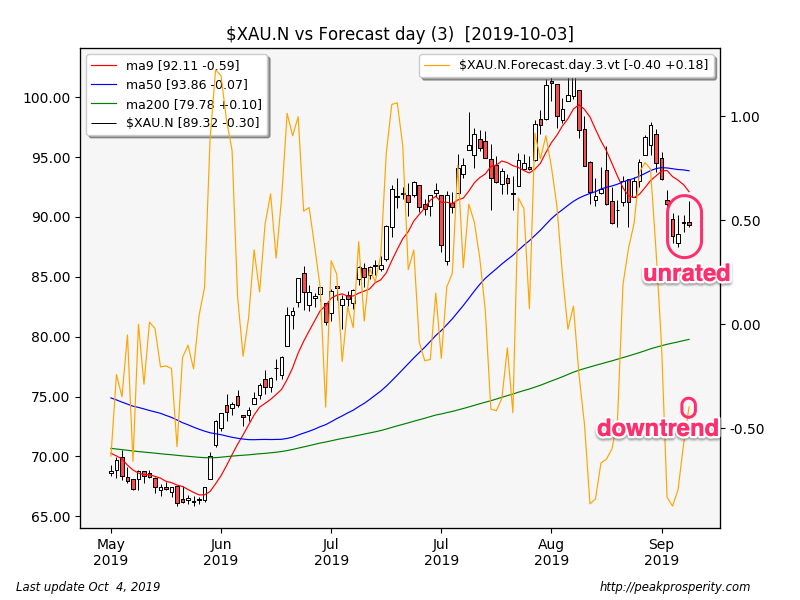 The buck fell -0.15 [-0.15%] to 98.44. The buck was hit reasonably hard at 10 am, but spent the rest of the day rallying back. The spinning top candle was a bearish continuation, and forecaster moved lower, entering a downtrend. The buck is now in a downtrend in the daily and monthly timeframes.  Today’s move took the buck through the 9 MA. 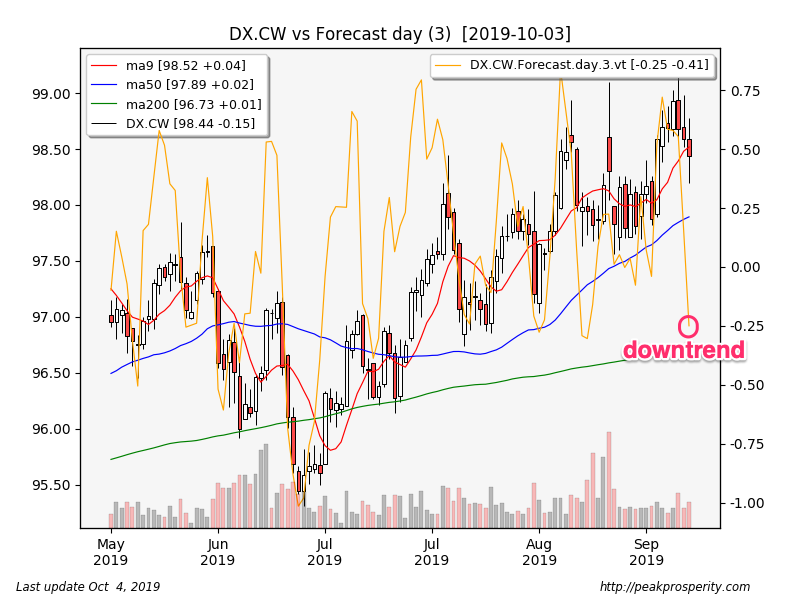 Crude fell -0.12 [-0.23%] to 52.19. Crude took one leg down at 9 am, and then another at 10 following the ISM report making a new low to 50.99. That low didn’t last long; crude then rebounded sharply, managing to eliminate almost all the losses for the day by the close. The doji star candle was bullish (39%), and forecaster moved higher, but not quite enough to pull crude out of its downtrend. Crude remains in a downtrend in all 3 timeframes. Crude did seem to bounce off 51 support today.  This could be a low for crude. Maybe. RSI-7 for crude is 22, which is fairly oversold, but a careful trader would probably wait for confirmation tomorrow. 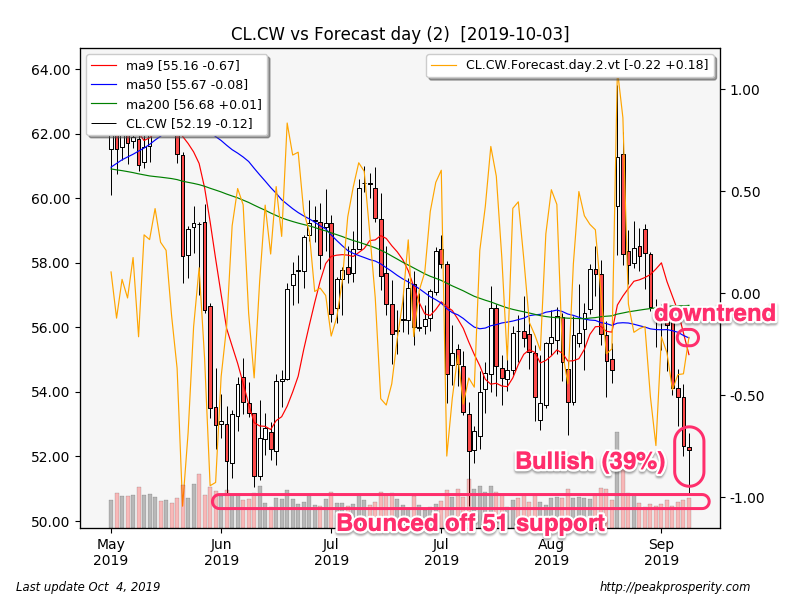 SPX rose +23.02 [+0.80%] to 2910.63. SPX initially tanked following the ISM report (losing some 35 points in just 10 minutes), but then bounced back – seemingly alongside crude. The two charts looked roughly similar. The spinning top candle was bullish (43%) and forecaster moved higher but remains in a downtrend. In spite of today’s rally, SPX remains in a downtrend in all 3 timeframes.

TLT jumped +0.91%, the long white candle was a bullish continuation, and forecaster moved higher into its uptrend. TY climbed too, up +0.49%, the opening white marubozu was a bullish continuation, and forecaster moved a bit higher into its strong uptrend. TY remains in an uptrend in all 3 timeframes. The 10-year yield fell -6.0 bp to 1.54%. Today’s bond market rally – it doesn’t line up with the rally in equities. One of those two items is wrong, and based on the ISM report, it is probably equities.

JNK fell -0.06%, the high wave candle is bullish (50%), but forecaster moved lower into what is now a strong downtrend. While junky debt did rally off the lows, it didn’t look nearly as enthusiastic as equities today. BAA.AAA differential fell -3 bp to +87 bp. Money is still flowing into low quality debt right alongside treasury bonds. No worries from the credit market.

We are seeing conflicting signals right now in the market:

So which story do we believe? Well, I pick the story that bonds are telling us. Money is flowing strongly into the bond market, and since it is the biggest market we have, it is the hardest to manipulate. Likewise, prospects for rate cuts just continue to increase every day. Both suggest higher prices for gold. Today “somebody” dropped 52 tons of paper gold onto the gold market.  That certainly helped cap gold’s rally.  Now maybe the commercials see a reaction rally petering out – or maybe its a suppression campaign. Its hard to tell from my spot in the cheap seats. But money flowing into bonds and rapidly increasing rate-cut odds say: gold positive.