The UK Parliament voted to approve an election for December 12. Remainers wanted to give 16 year olds and EU nationals the right to vote (presumably because they’d vote Remain); “if the current voters don’t support your position, try to add in some new voters who will.” (Bernie suggesting giving prisoners currently in jail the right to vote is a similar concept.) This measure was defeated. GBP ended the day mostly unchanged. Johnson is already campaigning on a platform of “Get Brexit Done”, which I suspect will be a very popular platform. I’d expect some sort of UK exit sometime in mid-December, following the election.

Gold moved sideways in the Asia session, but then at 6:25 am, gold was hit for about $10 in 15 minutes. It recovered somewhat by end of day. The short black candle was a bearish continuation, and forecaster dropped into what is now a strong downtrend. Gold remains in a downtrend in both daily and weekly timeframes.

COMEX GC open interest fell -6,520 contracts. That shows at least some cash-register ringing by the commercials on today’s decline, which I think is a good sign. 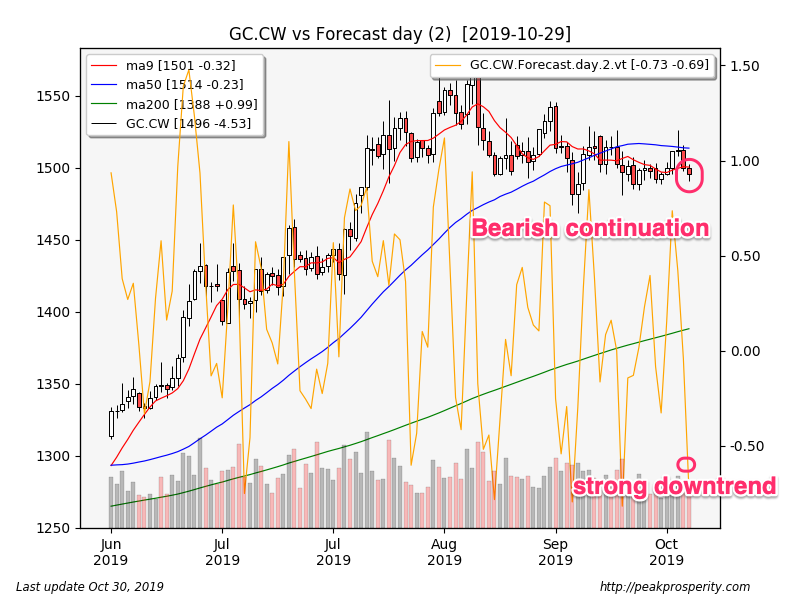 Silver mostly followed gold, but the drop was less intense, and the rebound stronger. The high wave candle was a bullish continuation, but forecaster dropped enough to move silver into a downtrend. Silver is still in an uptrend in both weekly and monthly timeframes, but the weekly uptrend is very weak. Silver continues to mostly outperform gold. 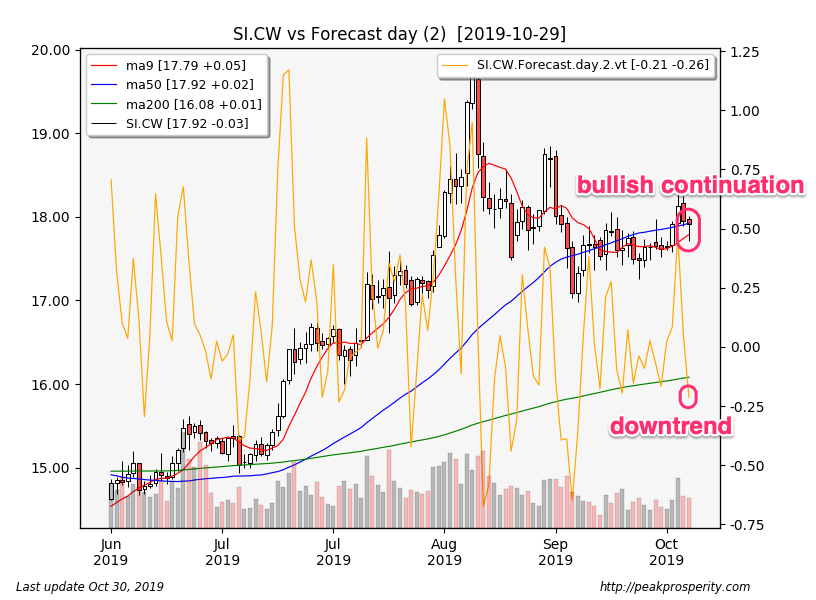 Miners gapped down at the open, rallied for the first half of the day, and chopped sideways into the close. GDX climbed +0.55% on light volume, while GDXJ rose +1.26% on light volume also. XAU moved up +0.70%, the long white candle was neutral, and forecaster moved higher into its uptrend. XAU remains in an uptrend in all 3 timeframes.

Miners really still seem to have a bid, in spite of the poor performance in the metals today. That’s a positive sign. 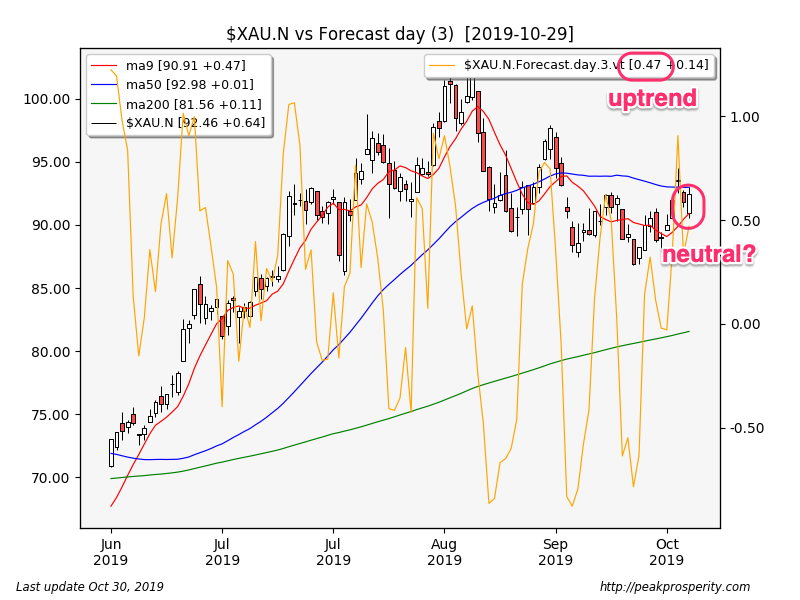 Platinum rose +0.21%, palladium fell -1.33%, while copper moved up +0.34%. That’s a new 3-month high for copper, dating back to July. Maybe there is something to that story about an incipient commodity rally I talked about yesterday. Copper still has a long way to go for a real recovery, but that said – copper is in an uptrend in all 3 timeframes. I’ll keep a closer eye on it from now on.

The buck moved down -0.06 [-0.06%] to 97.25. The high wave candle was a bullish continuation, and while forecaster fell, the buck managed to remain (just barely) in an uptrend. The buck is in a downtrend in both weekly and monthly timeframes.

Crude fell -0.19 [-0.34%] to 55.64. Crude moved lower (losing more than $1) for the first half of the trading day, bottoming out at about 9 am, and then bouncing back reasonably strongly for the remainder of the day. The swing high/hammer candle was a bullish continuation, but forecaster fell, dropping deeper into its downtrend. Crude remains in an uptrend in both weekly and monthly timeframes.

JNK fell -0.22%, the swing high candle pattern was bearish (54%) and forecaster fell, but remains in an uptrend. This was a pretty brisk drop for JNK; is it a “risk off” tell? Maybe. BAA.AAA differential rose +1 bp to +93 bp. Credit concern remains modest at best.

CRB rose +0.05%; only 1 sector rose, and it was industrial metals (+0.72%). Interesting, it appears as though industrial metals may be about to break out higher on the weekly chart. It has been making a pattern of higher lows since the bottom in June. Something to watch. It might explain why silver is doing so well in recent weeks.

The rally in the mining shares today, when both gold and silver moved lower, is positive for the metals overall. This could be related to the base metal rally; many “gold” miners dig out other metals along with gold, so they do better when base metal prices increase. It might also be due to earnings season too; AEM (I’m long) reported record production and the best quarter in perhaps 5 years.

With the UK election scheduled 6 weeks from now, Brexit math turns to polls, and political deals; Tories aligning perhaps with Farage and the Brexit party, while Lib Dem is clearly for Remain, and Labour tries to straddle the fence. (Good luck with that). It sure seems like clarity of position is the position to have. In a recent German regional election, both ends of the spectrum (left, and right) trounced the centrist parties. My explanation – corruption: “Once the center becomes hopelessly corrupt, the fringe parties will get their chance at power.” Last time that happened was, of course, 1932. But that was during a massive depression, and the relatively muted move we are seeing now is because things are still – mostly – economically ok.

Still, this seemingly global trend does not bode well for fence-straddling Labour in the UK.

The Fed meeting started today, with the announcement tomorrow at 2 pm followed by Powell’s press conference at 2:30. The market clearly expects a rate cut tomorrow, but thinks that will probably be it for the rest of the year. To me, the interesting bit isn’t about the rate cut, but is entirely to do with the new not-QE money printing happening in the repo market. It will be interesting to hear what Powell has to say about that.