The interesting news item today was the results of the latest German regional election on Sunday.  Merkel’s CSU suffered severe losses; they went from 38% down to 27%, as did the SPD which fell from 30.8% down to 19.8%.  Both the Greens and AfD were the beneficiaries.  In response to the results, Merkel said she was resigning, but (surprise!) not until 2021.  It reminds me of the parable about “teaching the horse to sing”: a lot of things can happen in 3 years.  Still, if current trends continue, the CSU might well not exist by then.  Merkel is also resigning as the leader of the CSU in December.  I’m guessing she won’t last until 2021.

Gold slowly moved lower for most of the day, making its low at 1 pm, and then rallying back into the close. The candle print (swing high/bearish engulfing) was a 56% bearish reversal. Forecaster ticked lower, down -0.04 to +0.07, which says gold is still clinging to an uptrend. Gold ended the day just above the 9 MA. Gold remains in an uptrend on the daily and weekly timeframes, and GC.EUR remains in an uptrend in all 3 timeframes. 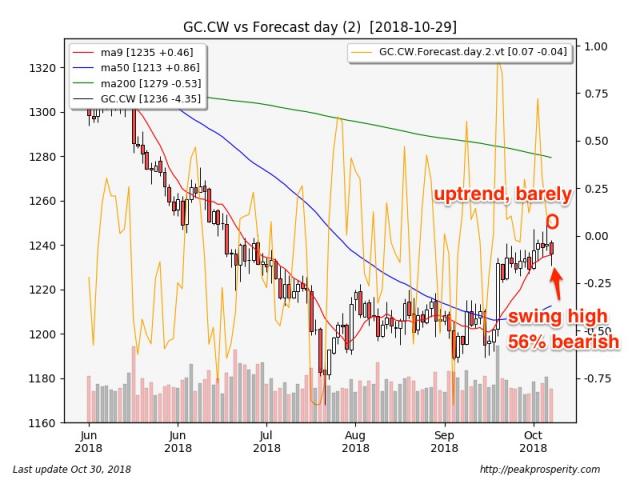 Silver spiked to a new high at 8:30 am, but then reversed and sold off hard, making its low at 1 pm along with gold.  Silver moved roughly in tandem with copper and palladium.  Silver’s confirmed bearish NR7 candle might be a bearish reversal (51%), and silver’s forecaster plunged -0.34 to -0.53, which is a fairly strong downtrend. Silver dropped clean through both the 9 and 50 MA lines, finally coming to rest right at its uptrend line. Silver’s chart is not looking great. It is in a downtrend in all 3 timeframes.

The gold/silver ratio rose +1.09 to 85.00. That’s quite bearish; the current level for the ratio suggests PM could be at or near a long term low. 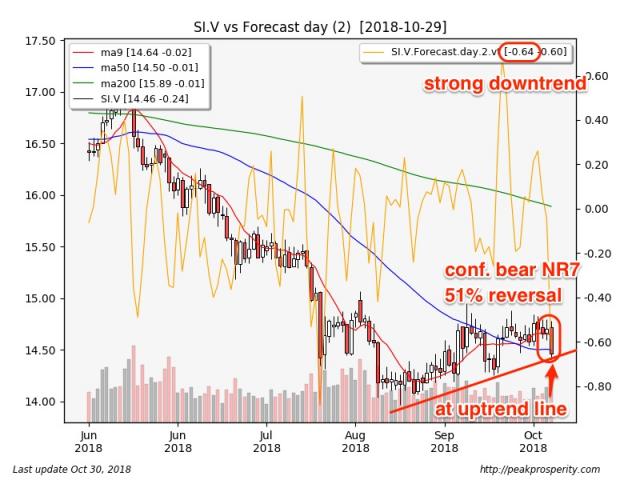 Miners managed to avoid disaster today, even with the large drop in silver; GDX moved down -0.26% on moderate volume, while GDXJ dropped -1.13% also on moderate volume. XAU fell -0.72%. The long black candle has a slim chance (33%) of being a bullish reversal. Forecaster fell -0.06 to -0.65, which is still a strong downtrend. XAU remains in a downtrend in all timeframes. 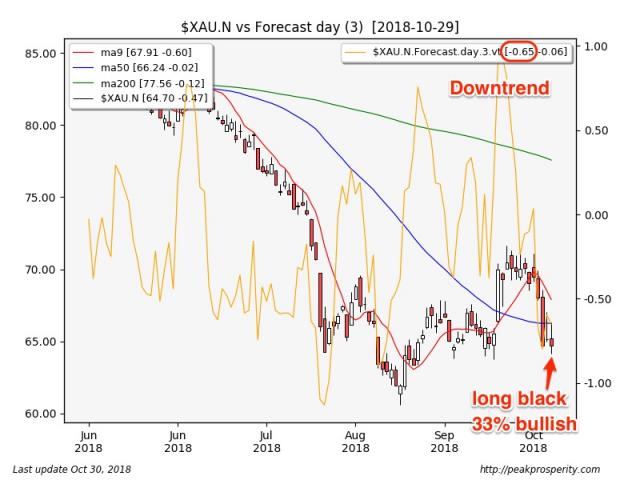 Platinum moved down -0.07%, palladium fell -1.31%, while copper dropped -1.33%. Copper is moving slowly lower, palladium is down a bit from its all time high, while platinum seems undecided about direction.  The other metals (including silver) moved more or less in a rough group today, with silver losing the most.

Crude fell -0.89 [-1.31%] to 66.84. The long black candle was neutral, while forecaster jumped +0.11 to +0.09, which is a buy signal for crude. Crude does appear to be trying to put in a low here, although it remains in a downtrend in both the weekly and monthly timeframes. We still don’t have much of an explanation for crude’s $10 drop; Nick Cunningham tried to explain it, but ultimately was a “multi-handed economist”: on the one hand, we’ve had a bunch of bad EIA reports, on the other, Iran sanctions are due to hit shortly and everyone appears to be cooperating with the effort, and on yet another hand Libya is targeting 1.6 mbpd production by end of year, and one last hand, the IEA is projecting a supply deficit within 2 months.

SPX fell -17.44 [-0.66%] to 2641.25. In truth SPX was all over the map today, rallying strongly, then plunging, then recovering. Ultimately, the long black candle was mildly bullish (33% reversal) but forecaster moved up just +0.01 to -0.66; that’s still a strong downtrend. The monthly candle looks really horrid, and we are just about at end of month. SPX is in a downtrend in all 3 timeframes.

JNK had a wide trading range but ultimately went nowhere, unchanged on the day. There is no alarm in the junky credit market right now, which seems to suggest that – for the most part – all remains well in the economy, and this sell-off is driven by something other than bad economic news. JNK may be trying to put in a low here; forecaster jumped +0.45 to -0.49. That’s still a downtrend, but a slowing one.

CRB plunged -1.07%, dropping below the 50 MA. Commodities have been moving slowly lower along with equities. Unlike JNK, this does hint at a weakening global economy. Perhaps JNK is more domestic, and CRB is international?   All 5 sectors fell, led by agriculture (-0.77%).

Silver and gold gave us some clues today intraday. Silver’s strong sell-off at around 8 am didn’t attract many buyers , but the much smaller drop in gold definitely did. Gold bounced back almost immediately, while silver languished down near its lows. Even with a gold/silver ratio of 85, which is historically very high, and usually signals a low for the metals, there just isn’t any interest in silver.

From the viewpoint of traders in China and Europe, gold continues to look much stronger than it does in the US. To traders in China, gold has significantly outperformed the Chinese equity market; since 2015, SSEC is down -26%, while gold is up 18%. Peak-to-trough the numbers are even more startling: SSEC is down -52% since its 2015 high, while gold (in CNY) is up 31% from its 2015 low. Some of that is a currency effect – but in truth, that’s how gold is supposed to act: like a foreign currency that isn’t tied to any specific government. And from a Chinese trader’s perspective – would you rather lose 52%, or make 31%? 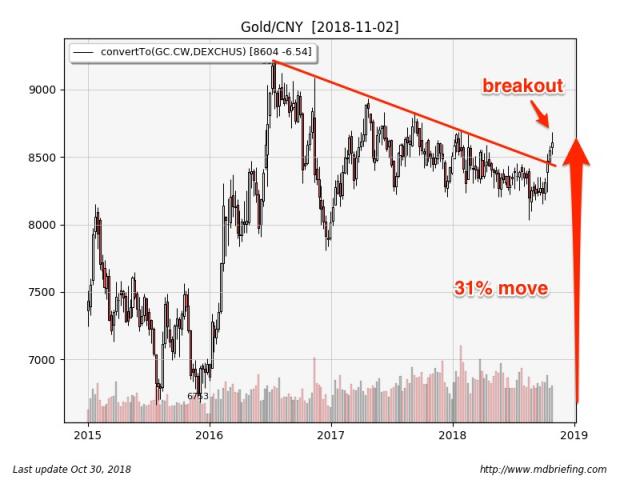