News out of the EU: the yet-another-Brexit extension was granted. Johnson’s bid for an early election was initially rejected (he failed to secure 2/3 of Parliament), but the rejection seems tactical – it is just about who gets to set the actual election date. It appears as though a “snap” election is likely to happen, as Mish lays out for us.

Summarized: Lib Dems are Remain, Tories are Leave, with Labour waffling in the middle. Current electoral math says: both Lib Dem and the Tories will end up ahead after an election, with Labour the loser. While Lib Dems would prefer a new referendum, that’s not gonna happen. Second prize: more power in parliament for them. Presumably, after an election where Tories regain the majority, Johnson’s deal will be passed, and Brexit will at long last occur. So Lib Dem + Tories together will vote for an election, with the date set in the Bill. Right now the parties are just negotiating over the particulars.

Gold started falling around 8 am, falling about $12 over the next 90 minutes. The swing high candle was quite bearish (63%), and forecaster dropped into a slight downtrend. Gold/Euros did much the same thing. The move was enough to pull the weekly forecaster into a downtrend too; gold is now in a downtrend in both daily and weekly timeframes, although both trends are quite mild. 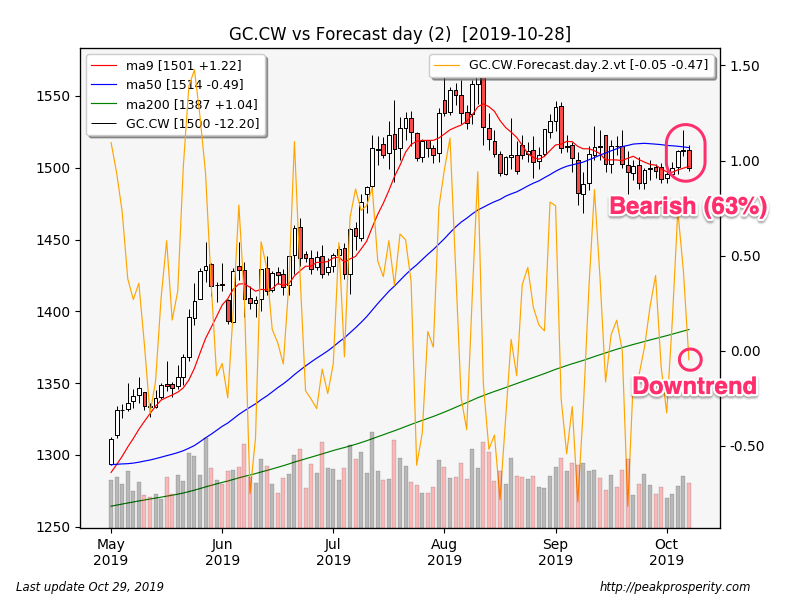 Silver more or less followed gold lower at 8 am, bottoming out roughly 2 hours later. However the dark cloud cover was surprisingly not bearish, and while forecaster fell, it remained in a slight uptrend. Silver remains in an uptrend in all 3 timeframes. 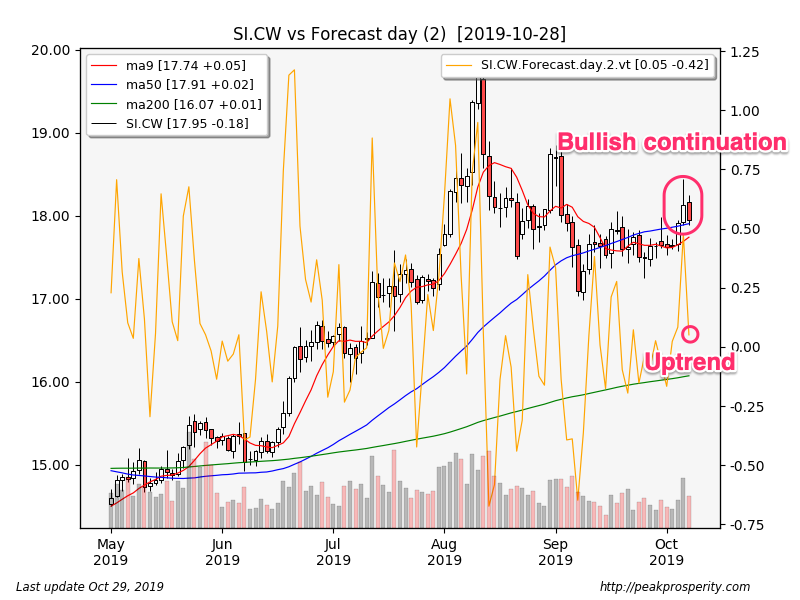 Miners gapped down at the open, fell for the first few hours, then moved sideways into the close. GDX dropped -2.45% on heavy volume, while GDXJ fell -2.23% on moderate volume. XAU moved down -1.84%, the swing high pattern was actually not bearish at all, and forecaster dipped, but remains in an uptrend. In spite of the decline, XAU remains in an uptrend in all 3 timeframes. 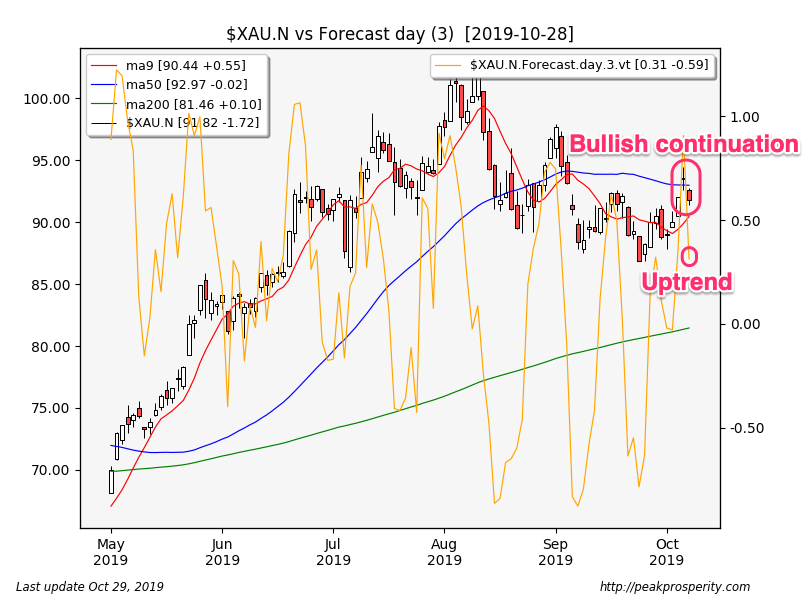 The buck moved down -0.09 [-0.09%] to 97.31. The bearish harami candle was actually a bullish continuation, and forecaster moved down but remains in an uptrend. The buck remains in a downtrend in both weekly and monthly timeframes.

Crude fell -0.85 [-1.50%] to 55.83. The bearish engulfing candle was somewhat bearish (40%), and forecaster dropped into a slight downtrend. Crude is in an uptrend in both weekly and monthly timeframes.

SPX climbed +16.87 [+0.56%] to 3039.42. Most of the gains came in the futures markets overnight. This was a new all time high for SPX. The short white candle was a bullish continuation, and forecaster moved higher into what is now a moderate uptrend. SPX remains in an uptrend in all 3 timeframes.

TLT plunged -0.91%, the opening black marubozu was a bearish continuation, and forecaster fell deeper into what is now a strong downtrend. The 30-year treasury yield rose +5 bp to 2.34%. TY fell -0.28%, the long black candle was a bearish continuation, and forecaster dropped into a downtrend. This was a new 2-month low for TY. The 10 year yield rose +5.2 bp to 1.85%. 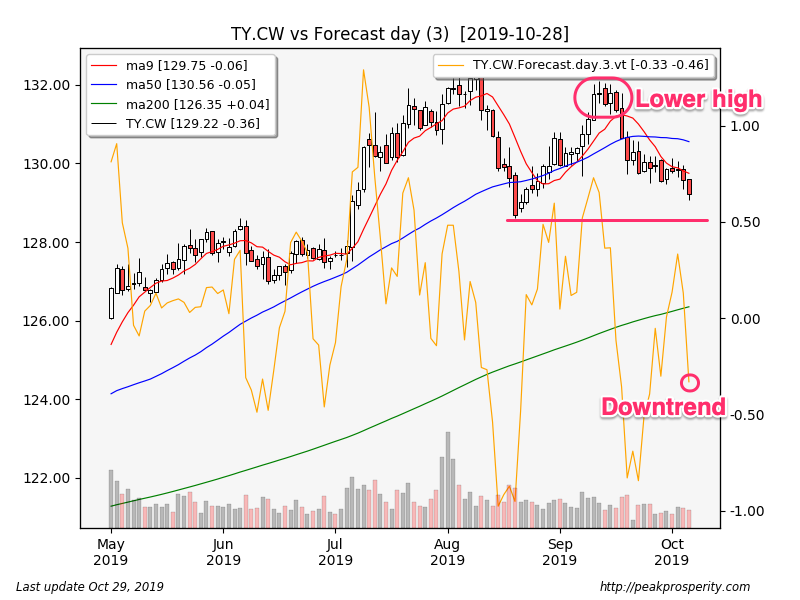 JNK climbed +0.07%, the short black candle was a bullish continuation, and forecaster moved higher into what is now a strong uptrend. Junky debt is supporting the risk on picture in equities – although this was definitely not a new all time high for JNK. BAA.AAA differential fell -1 bp to +92 bp. Credit concern remains modest at best.

CRB fell -0.05%, with 3 of 5 sectors falling, led by PM (-0.60%). There was an interesting interview over at KWN this weekend by an analyst hawking his $1800/year newsletter. He suggested that momentum in the commodity space might be close to a long term (bullish) reversal, and that a number of commodity-based equities that are trading at some really deep discounts stand to benefit a great deal if and when prices do actually reverse. You can listen to his interview for free. At some point commodities really will rebound, but as for timing? Don’t listen to me, I’m usually too early. If I had advice, it might be: write a newsletter and charge $1800/year for it. 🙂

Intraday, the breakout to new highs in SPX seemed to pull money out of the safe havens at roughly the same time.

Armstrong likes to say comparing how the major indices perform relative to one another can help identify what sort of trend it is; SPX is more local money, and the large cap DJI is more international money. Since SPX made a new high, and DJI did not, that suggests this move is more domestic. FWIW.

While gold was hit reasonably hard today, silver and the miners actually held up fairly well. Neither silver nor miners reversed direction, and since they tend to lead, that is a positive sign.

In fact, silver, gold, and the miners are actually holding up a whole lot better than the 10 and 30 year bonds, both of which are approaching a breakdown point. If the long bonds lose support…the selling could become fairly dramatic.

a) what’s in your fund, and

b) getting out early when things start to get illiquid

I suspect, but am not certain, that the Fed’s current repo affair has to do with entities and/or funds who have borrowed on the overnight market to buy illiquid higher-yielding debt, and the usual suspect lenders have recently decided to pull the plug on them lest Something Unpleasant Happen.

A number of funds in the UK have recently gone down because of this.  I do not think the timing of this repo matter is a coincidence.

So: a friendly note.  If you have money in a bond fund – you might just want to look carefully at the contents.  A US treasury only fund might be a better idea, given what the repo event is suggesting.

Otherwise your money might be locked up for quite some time if things go south.

If you have money in a bond fund – you might just want to look carefully at the contents. A US treasury only fund might be a better idea, given what the repo event is suggesting. Otherwise your money might be locked up for quite some time if things go south.

I think the only thing that matters here is size. The FED controls how this will play out, and the FED will never let the big, mainstream funds (say, a Vanguard MM) to fall and cause panic. We saw this in 2008; the FED will pick small losers to make an example (Lehmans) but never ones that roll into main street, and they have the power to make this stick for everyone who wishes to use USD. Sure, this could change over the next decade or two if the US has political problems, but for now the US is simply one of the cleanest shirts in a very, very, very dirty laundry pile. The economy of the US is simply too big and the resource base is too diverse (oil, coal, nukes, food, water, NG, military, gold) for the US to not be on the far end of any currency domino collapse. Of course, Black Swans happen, but they cannot be predicted.