Gold moved mostly sideways in a narrow range today. The short white candle was a bullish continuation, forecaster climbed, but remains in a downtrend. Gold is in a downtrend in the monthly timeframe.

Gold/euros climbed +3.45 [+0.21%] to 1619.98 on moderately light volume. The short white candle was a bullish continuation, forecaster climbed, but remains in a downtrend. Gold/euros is in a downtrend in both the daily and monthly timeframes.

Really not much to report. Gold did manage to close back above the 9 MA, but not by much. Trends in gold are almost flat. One poster suggested that the market was now waiting for the next shoe to drop. 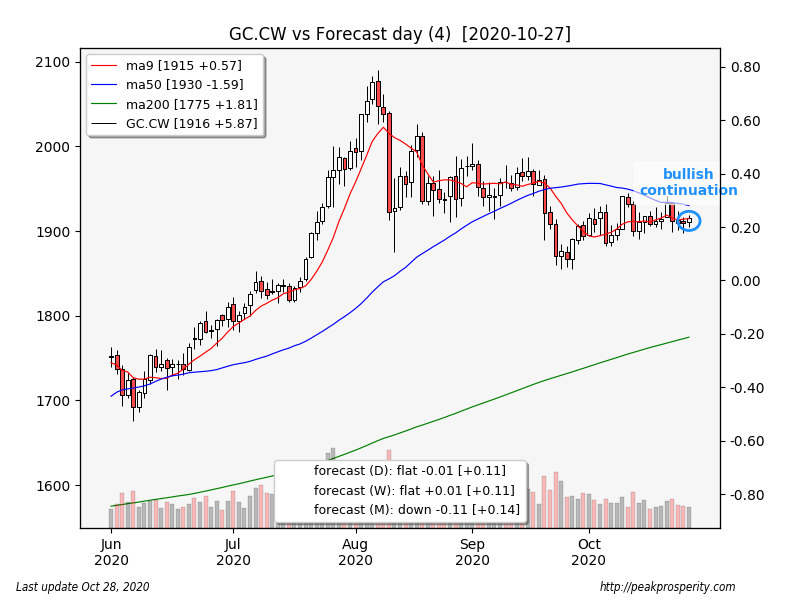 Silver rallied in Asia but wasn’t able to hold on to its gains. The spinning top candle was a possible bearish reversal (30%), forecaster climbed, but remains in a downtrend. Silver is in an uptrend in the monthly timeframe.

Silver staged a failed rally today; it also didn’t do very much. Silver remains below both the 9 and 50 MA lines. As with gold, current trends in silver are also flat. 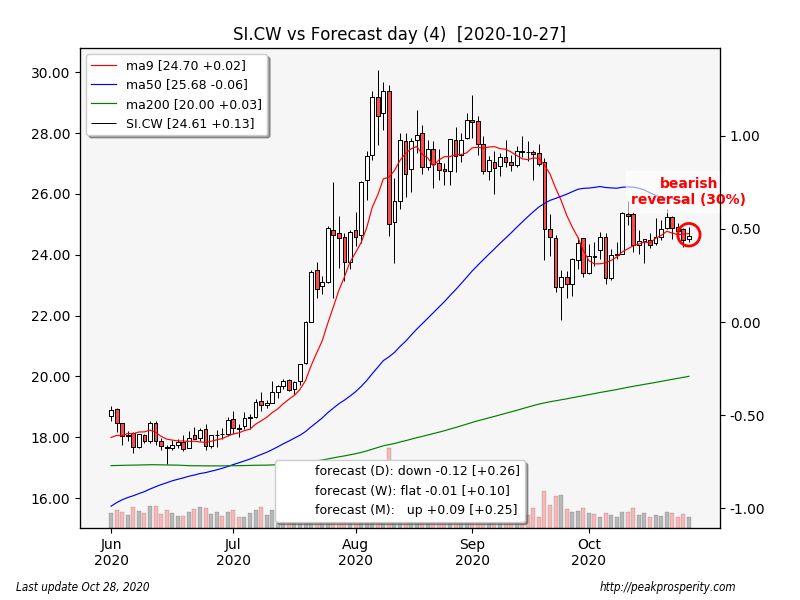 Miners rallied from the open until early afternoon, then moved sideways into the close. GDX climbed +1.62% on moderately light volume, and GDXJ rose +1.70% on moderately heavy volume. XAU rallied +1.85%, the long white candle was a bearish continuation, forecaster climbed, but remains in a downtrend. XAU is in an uptrend in the weekly and monthly timeframes.

Today was surprisingly positive for the miners; my code liked yesterday’s candle print, and it turns out the code was right. (Who knew?) That’s always fun. Today wasn’t quite enough for a swing low, but it did look pretty positive. Miner trends are mixed, but mildly positive in the longer term. XAU remains below both the 9 and 50 MA lines
. 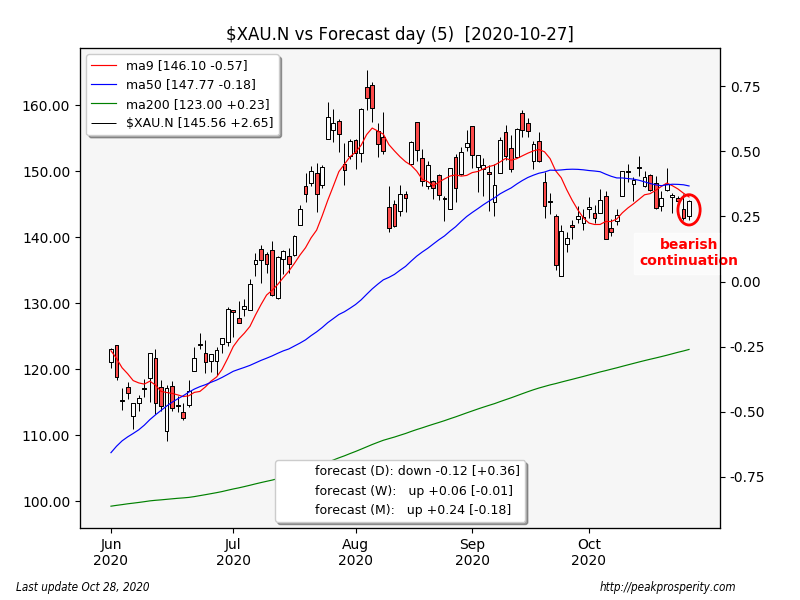 Copper dropped -0.01 [-0.32%] to 3.08 on moderately light volume. The southern doji candle was a bearish continuation, forecaster moved slightly higher into its uptrend. Copper is in an uptrend in the daily and monthly timeframes.

Copper trends remain mixed. Today didn’t change that at all. 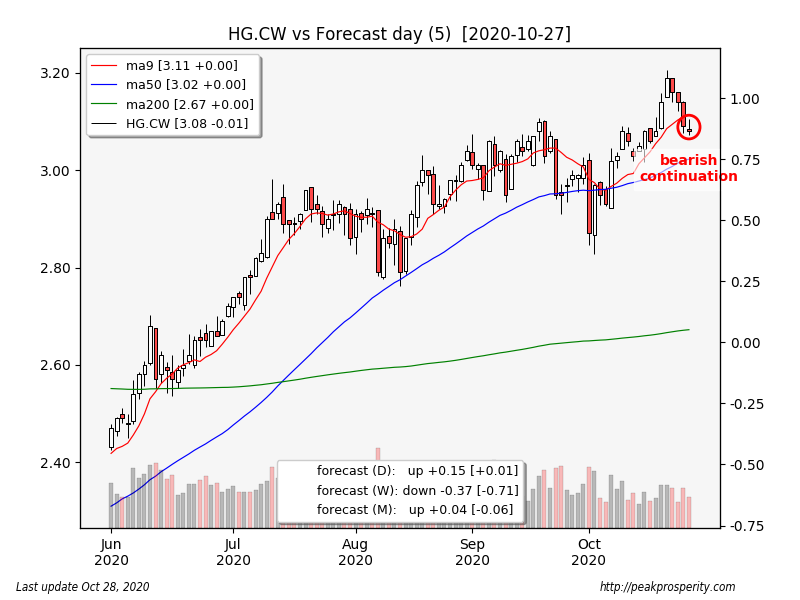 The buck moved down -0.11 [-0.12%] to 92.91 on moderately light volume. The long black candle was a bullish continuation, forecaster climbed, moving higher into its uptrend. The buck is in an uptrend in the daily and monthly timeframes.

While the rest of the world rallied against the buck, the Euro was mostly flat. The buck still looks like it is engaged in a slow bullish reversal. 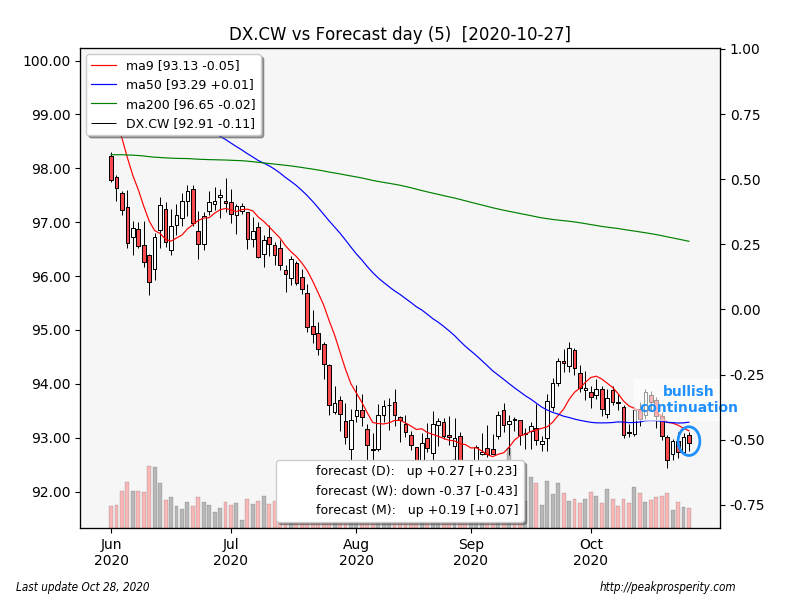 Crude rallied +0.34 [+0.88%] to 39.03 on moderate volume. The long white candle was a reasonably strong bearish reversal (47%), forecaster climbed, but remains in a downtrend. Crude is in a downtrend in all three timeframes.

Crude had a failed rally today – it was up almost a buck right up until the API report at 4:30 pm, after which it lost most of its gains. Crude remains in a relatively mild downtrend. 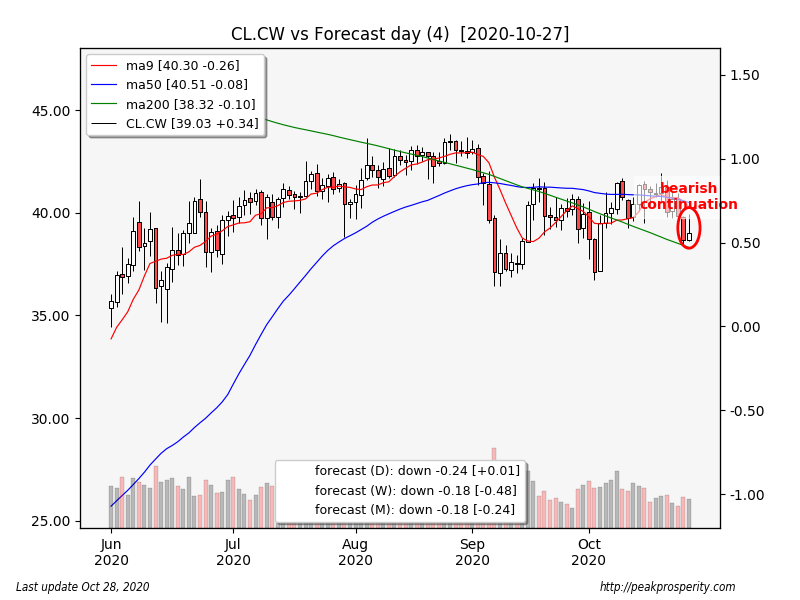 SPX fell -10.29 [-0.30%] to 3390.68 on moderate volume. The closing black marubozu candle was unrated, forecaster climbed, moving higher into its uptrend. SPX is in an uptrend in the daily and monthly timeframes.

Most of the losses for SPX took place towards end of day; NYSE advance ratio was 31%, which is fairly bearish. Forecaster still looks mildly positive, in spite of SPX making a new closing low. SPX remains below its 9 and 50 MA lines. 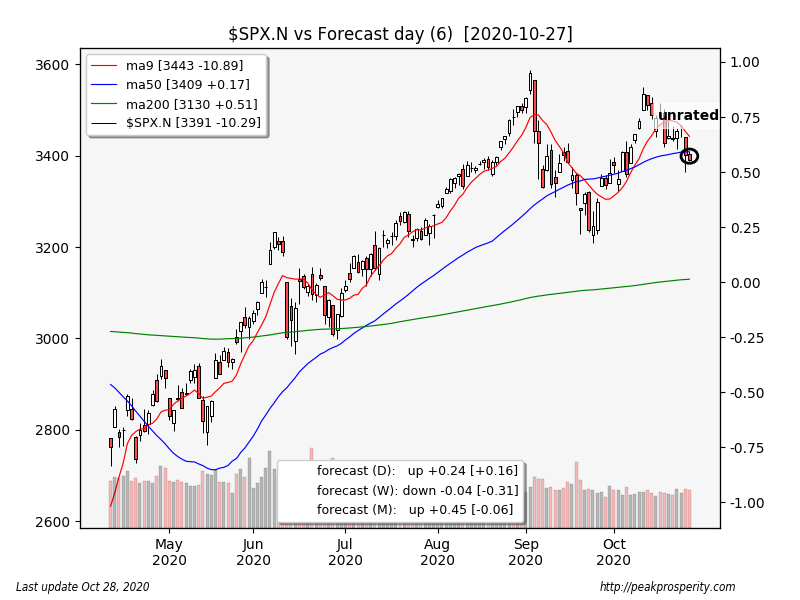 TLT climbed +0.67%. The spinning top candle was a bullish continuation, forecaster climbed, moving higher into its uptrend. TLT is in an uptrend in the daily timeframe. The 30-Year yield fell -4.0 bp to +1.55%.

TY climbed +0.19%. The closing white marubozu candle was a bullish continuation, forecaster climbed, moving higher into its uptrend. TY is in a downtrend in both the weekly and monthly timeframes. The 10-Year yield fell -4.0 bp to +0.77%.

It was another reasonably strong day for bonds. Is this a “no stimulus” celebration, or a flight to safety? Or both? 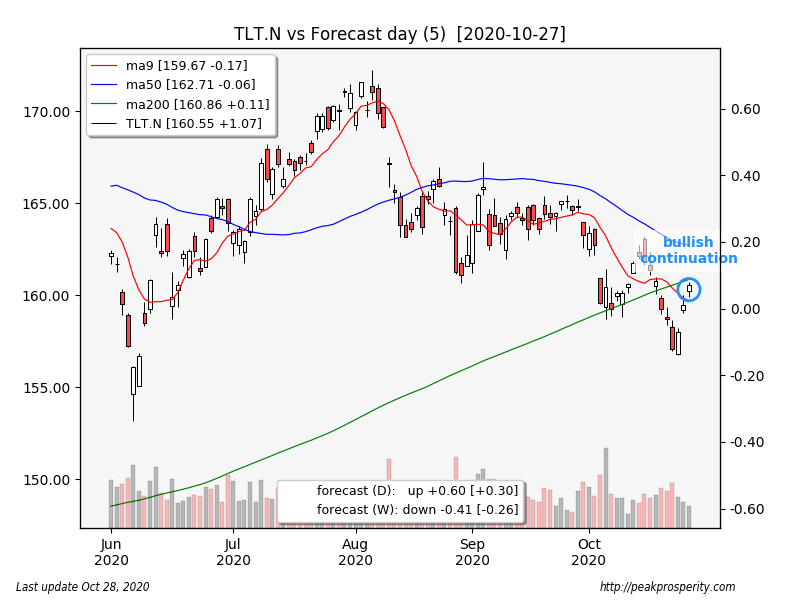 JNK was almost unchanged, up +0.02%. The bullish harami candle was a bearish continuation, forecaster climbed, but remains in a downtrend. JNK is in a downtrend in both the daily and weekly timeframes.

No change today for crappy debt. It still appears to be heading lower. 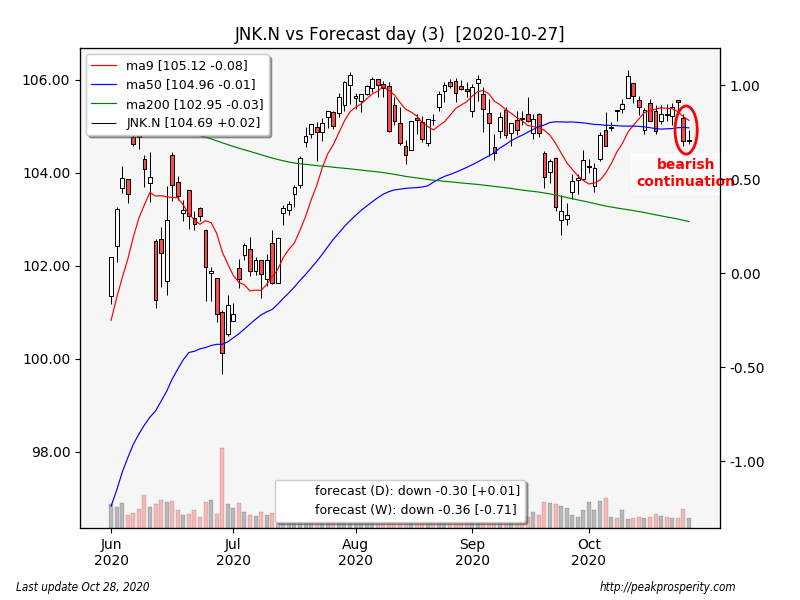 The GLD ETF tonnage on hand climbed +2.92 tons, with 1267 tons remaining in inventory.

Physical ETF discounts remain relatively wide except for PHYS, big-bar gold premiums are rising, while big-bar silver premiums remain low. It looks as though gold is the item currently in demand at retail.

Gold, silver, and the miners moved higher today, with the miners looking strongest. Not much happened, in truth, a
lthough the miners were surprisingly strong, relatively speaking.

Not much happened for risk assets either; equities and copper edged lower, crappy debt was unchanged, and crude tried to rally but largely failed on a bearish-looking API inventory report.

Bonds did reasonably well for the third day in a row. I’m guessing that’s the reward for “not doing more stimulus.”

The buck fell, but then mostly bounced back. It seems to be slowly edging higher.

My eye is on the probable record-breaking GDP print coming out on Thursday. I think this outcome is widely expected by the markets, but probably will come as a surprise to the US population. Trump will sure talk about it, that’s for sure. Call it a taxpayer-funded $3.5 trillion dollar campaign contribution for the Bad Orange Man.  It explains why Pelosi was – shall we say – reluctant to do anything more.

Last thing.  The growing CCP-funded Biden Family Business scandal saw another new development; the erstwhile CEO of one of the family’s efforts, former Naval officer (and rich guy) Bobulinski, got an hour on Tucker Carlson to provide chapter and verse on his side of what went down. According to his testimony, backed up with a fistful of evidence, far from being ignorant of “Hunter’s business dealings”, Joe Biden was clearly involved – else why meet with Bobulinski for an hour? According to some simple math, Joe Biden was signed up to receive 20% of the take.

Bobulinksi is a Democrat. His motivation: he did NOT like being called “Russian Disinformation.” The former naval officer really, really, didn’t like Adam Schiff saying this about him. It was the single reason he came forward.

The issue at hand: with a week to go, can Biden survive on the ticket until November 3rd? Now the calculus must be: when do they replace him? Before – or after – November 3rd? Even if he wins the election, I do not think he will (politically) survive to take the oath of office. Perhaps he will resign “for matters of health”.

Probably: longer term, it will affect confidence in government. Ultimately, that has to be good for gold.

Heh well prior to this being good for gold, it looks like we have a brisk decline ahead of us.

I knew there was a reason I was putting off getting more physical silver.  The decline just didn’t feel quite over yet.

I’m starting to think this election is going to be a nothing-burger. At this point, I can’t honestly believe anything that is being said or written about anything, anywhere. It’s all going to deflate into a giant pool of post-election apathy.

My gut says today might be a good day to take profit on my VIX calls and maybe buy some VIX puts. My gut is often wrong, but I think shorting this election drama bullish*t (a.k.a. going long the markets) makes common sense too.

Oh yeah DF, when your linked-source is Fox News or CNN, good luck with the usefulness your conclusions.

Ok then Mr Smarty Pants, if I can’t go to Fox or CNN, where should I go for the latest in “walls closing in” updates?  🙂

Actually, I try not to pick Fox as my source most of the time, since I know many people will imagine it is just fake news.  Of course, nobody else on the planet would consider allowing the guy who happens to be an eyewitness to Biden’s corruption to speak freely for an hour, so this time, there was no choice.

You *know* if there was something analogous on the other side – if there was an eyewitness with chat logs and emails – to (say) Eric Trump doing something untoward with the CCP, with Eric – talking about the equity split – “holding 10 for the big guy”, all four news networks would be talking breathlessly about nothing else, 24/7, for the next three years.  They’d have this guy on for days, weeks, he’d have to sleep at the studio.  They had much less during Mueller, and that didn’t even slow them down.

But today?  Crickets.  Only Fox.

Sure looks like a “sell everything” sort of day today.  Not sure why gold is selling off along with equities.  Maybe this is all stuff happening in anticipation of the ECB meeting tomorrow.  Or it might be “bad pandemic in Europe” news.

Not sure why gold would sell off from that though.

That VIX sure does look good.  Maybe sell half now?  After first hour?  It does tend to max out with the RSI value > 75.  Unless of course we get a meltdown.

I’ve done more buying and selling this morning than I’ve done in the past 3 months in total!

I probably bought a little early but I just took initial positions in long-term call options.

This week has been fun, but it sure was painful waiting for it to come.

You did a great job being patient.  Congrats!

Did you pick up any (more) silver?

I still think the sweet spot for silver is $20-21 (spot). If we see that in the next couple of months I will be going all in.

I think I’ve found a trading strategy that works good for me, with your help of course. Many, many thanks brother.

I’ll see where we close today.  I’m thinking physical at this point.  I should just start dollar-cost-averaging.   But I could see it re-testing the 22 low.

I was considering writing puts, but the implied vol wasn’t all that high.

That XLE candle print looks pretty good right now.  But I’m a little worried about crude holding 36 support.  The whole “Europe melting down from the second wave” thesis might have a while to play out.

I think I trade less than you do.   Probably due to the options thing.  I just don’t use them that often.

Went to the APMEX site and ran the numbers for premiums:

Whoever wrote the Chairman’s initial comments did a great job.  It is clear that the honorable Senator understands about 5% of what he is actually saying.

I mean, he seems like a nice guy.  Just totally clueless about the subject matter at hand.  This is why Tech rules the world.  Nobody has a clue.  He’s only 69, but he might as well be from the Stone Age.

They did have a Dem on the committee who wrote code long ago – she waved a – calculator – to prove it.  (!)  She wants to make sure hate speech gets regulated by training those AIs to recognize it.  Quickly too.  Of course as long as you get to be the one to train the AI as to what is “hate speech”, that’s a grand thing.  “Hey, the AI called it hate speech.  Who are we to disagree?”