Gold dipped in Asia, bounced back during London, then moved sideways for the rest of the day. The doji candle was a bearish continuation, forecaster fell, dropping into a downtrend. Gold is in a downtrend in all three timeframes.

Gold/euros climbed +4.31 [+0.27%] to 1616.53 on moderately light volume. The spinning top candle was unrated, forecaster climbed, but remains in a downtrend. Gold/euros is in an uptrend in the weekly timeframe.

Not much happened today for gold; given the dollar decline, that’s a mildly positive outcome. 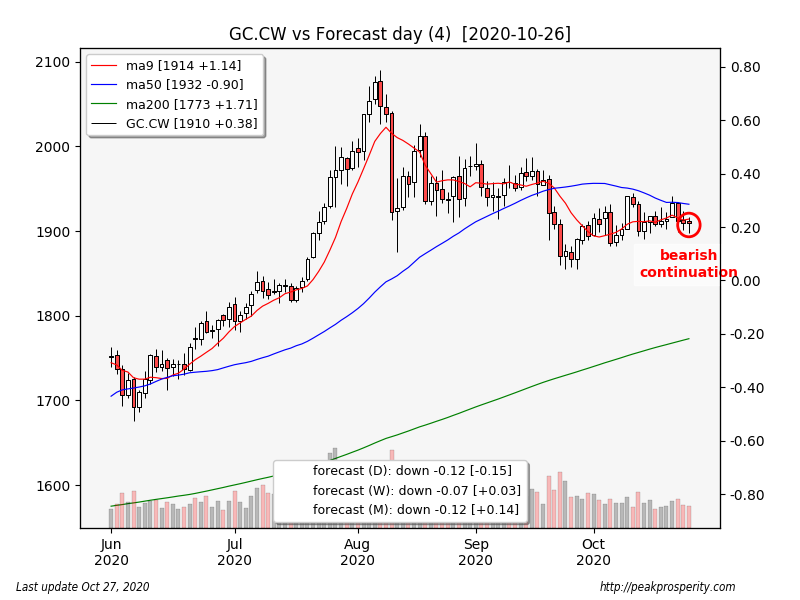 Silver dropped early in Asia, and then chopped mostly sideways for the remainder of the day. The opening black marubozu candle was a bearish continuation, forecaster fell, dropping into a downtrend. Silver is in a downtrend in the daily timeframe.

Silver didn’t do so well when compared with gold. It ended the day below the 9 MA; that’s not a great sign. Longer term trends remain mostly flat. 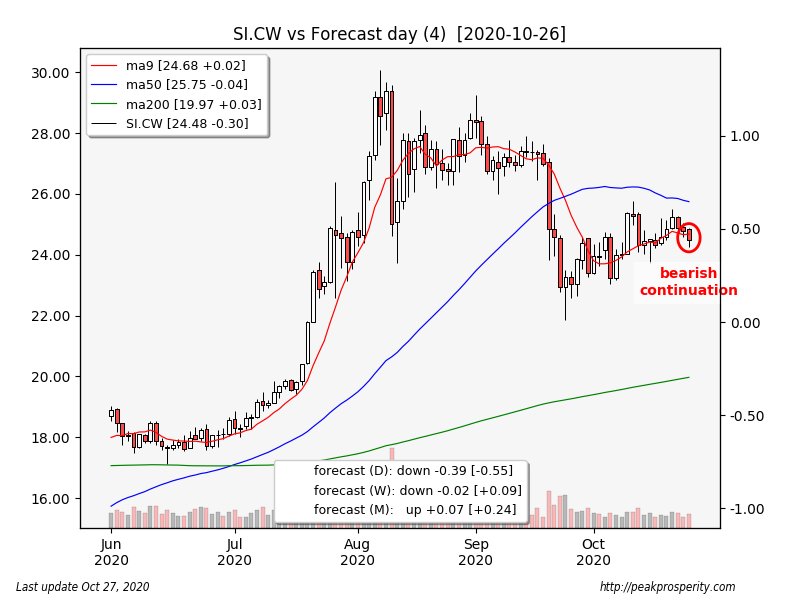 Miners gapped down slightly at the open, rallied in the first 30 minutes, then sold off through end of day, closing at the lows. GDX fell -1.57% on moderate volume, and GDXJ dropped -2.11% on moderate volume. XAU moved down -1.75%, the spinning top candle was a reasonably strong bullish reversal (41%), forecaster climbed, but remains in a downtrend. XAU is in an uptrend in the weekly and monthly timeframes.

My code liked today’s price action – I did not. I feel the miners look weak; they made a new 2-week low, and they closed at the lows too. Neither of those are a good sign. Medium-term trends are still modestly positive. 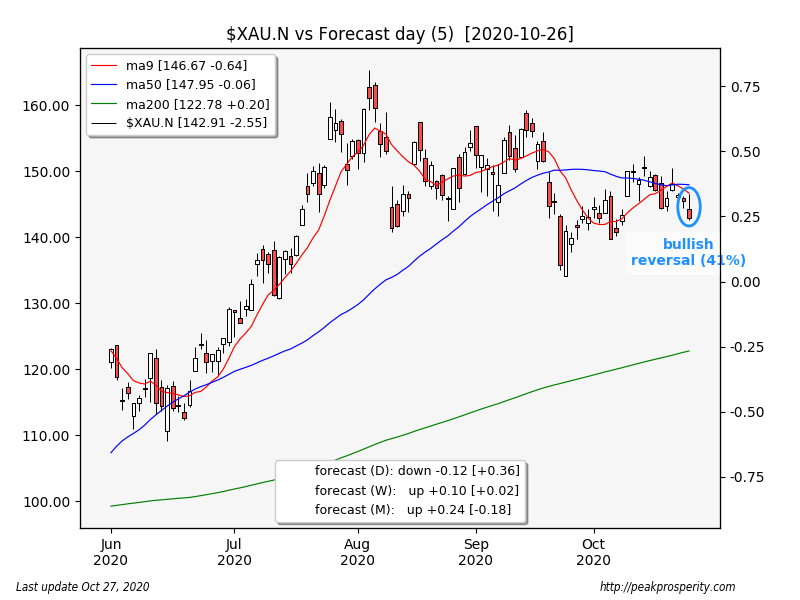 Platinum fell -34.80 [-3.98%], and palladium fell -34.87 [-1.47%]. Platinum really had a bad day, although the candle print was both bearish and bullish at the same time. Both platinum and palladium have fallen into downtrends, but not very severe ones.

Copper fell -0.05 [-1.59%] to 3.09 on moderate volume. The opening black marubozu candle was a bearish continuation, forecaster climbed, moving higher into its uptrend. Copper is in an uptrend in the daily and monthly timeframes.

Copper’s brisk move down took it below the 9 MA, which is a bearish sign. The move was bearish enough to yank the weekly into a downtrend. It is possible that copper really is starting to finally correct. Maybe. 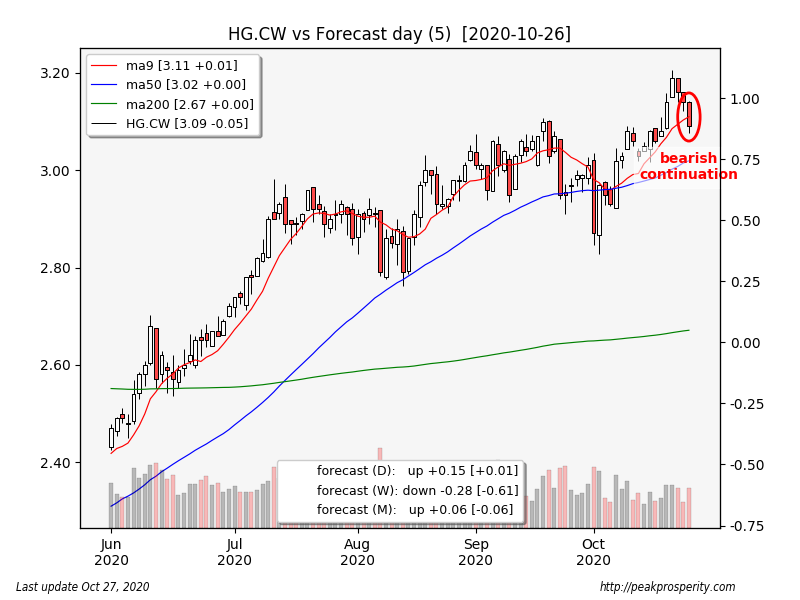 The buck rose +0.28 [+0.30%] to 93.02 on moderately light volume. The opening white marubozu candle was unrated, forecaster climbed, moving higher into its uptrend. The buck is in a downtrend in both the weekly and monthly timeframes.

Still no real clarity for the buck – it appears to be trying to put in a low here, but it is a slow process. Buck remains below all 3 moving averages, which is bearish. It really needs another close above the 50 MA to start looking a bit more healthy. 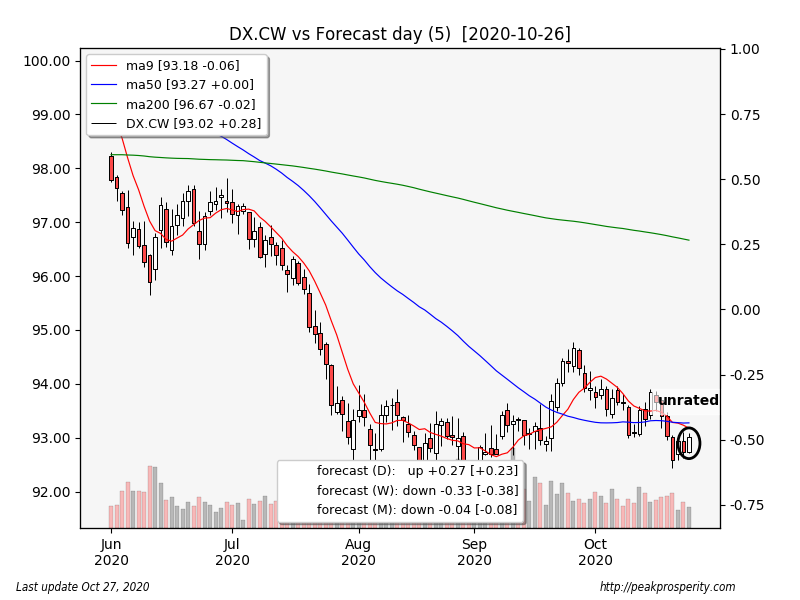 Crude plunged -1.14 [-2.86%] to 38.69 on moderate volume. The opening black marubozu candle was a bearish continuation, forecaster inched higher, but remains in a downtrend. Crude is in a downtrend in all three timeframes.

This was not a good day for crude at all; it did seem to find support at the 200 MA, but the trends are now all pointing lower. 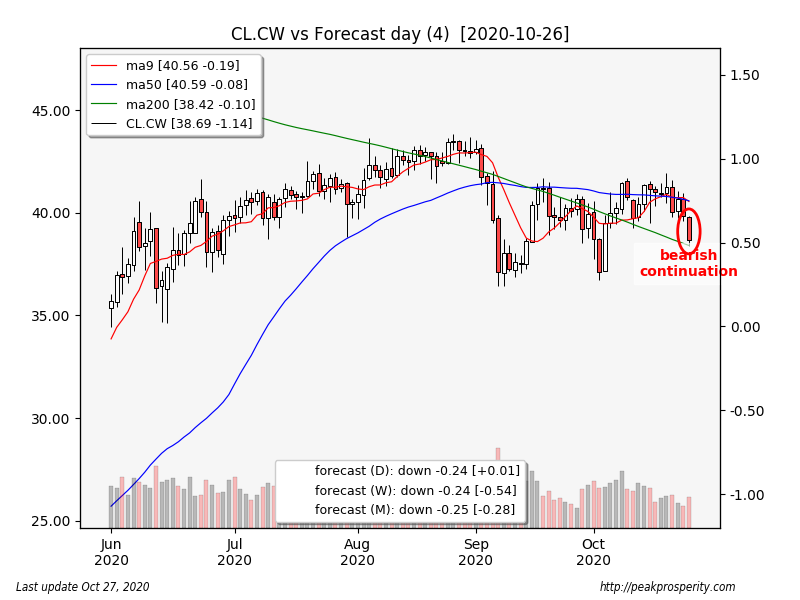 SPX plunged -64.42 [-1.86%] to 3400.97 on moderate volume. The confirmed northern doji candle was a likely bearish reversal (62%), forecaster climbed, moving higher into its uptrend. SPX is in an uptrend in all three timeframes.

NYSE advance ratio was 12%. That’s really bearish. SPX was actually down really hard through mid-day, and managed to recover half of its losses by the close. So far forecaster hasn’t dropped into a downtrend yet, but we have a close below the 50 MA, which is a bearish sign. 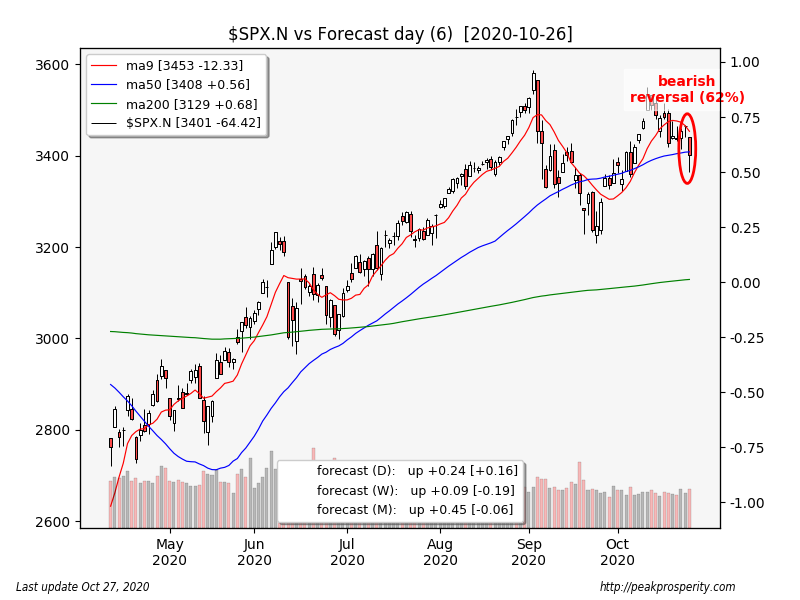 TY climbed +0.22%. The opening white marubozu candle was a bullish continuation, forecaster climbed, rising into an uptrend. TY is in a downtrend in both the weekly and monthly timeframes. The 10-Year yield fell -5.0 bp to +0.80%.

It was a strong day for bonds – the first in a while. 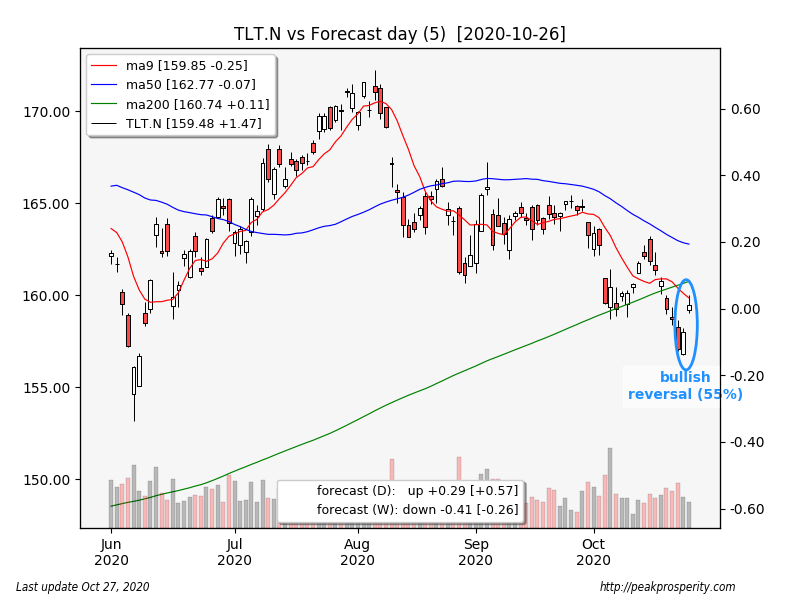 JNK dropped -0.80%. The swing high candle was a likely bearish reversal (63%), forecaster dropped, dropping into a downtrend. JNK is in a downtrend in both the daily and weekly timeframes.

Today JNK fell through both the 9 and 50 MA lines, printed an ugly reversal pattern, and plunged into a downtrend. This is a pretty clear bearish reversal for crappy debt. 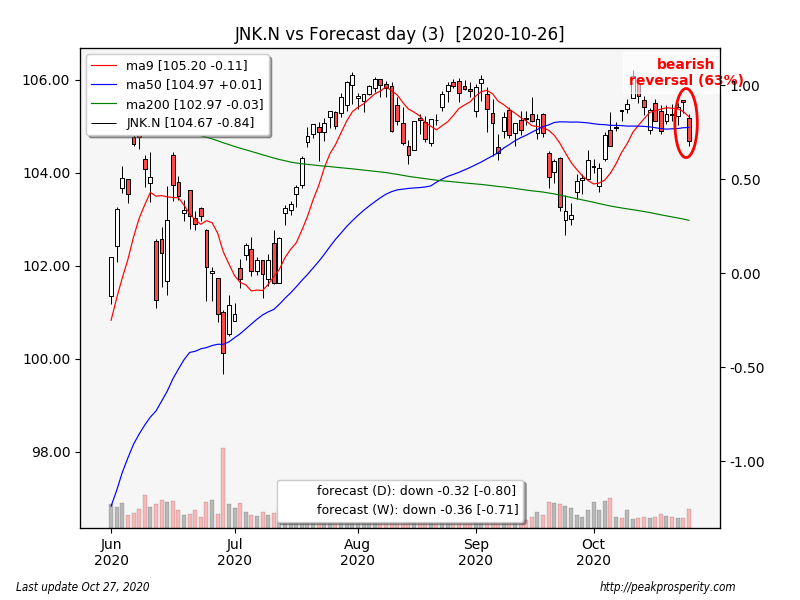 The GLD ETF tonnage on hand was unchanged at +0.00 tons, with 1264 tons remaining in inventory.

Gold managed to stay even, but silver and the miners were hit fairly hard today. The miners looked to have been dragged down by the equity market plunge, while silver appears to have been connected to the buck, at least to some degree. The PM group overall is starting to look a bit more bearish.

Equities, crappy debt, copper, and crude all declined fairly substantially today, but the declines were not synchronized, i.e. the drops were not all triggered by one single event.

Bonds did quite well today. Perhaps the bond market isn’t dead just yet; money flowed into the buck also.

There will almost certainly be no stimulus agreement prior to the election.

The CCP said it would impose sanctions on Lockheed Martin, Boeing, and Raytheon in response to the US selling a coastal defense weapons system to Taiwan.

Q3 GDP is set to come out this coming Thursday.  Here’s what the chart of GDP Now (the Fed’s GDP forecast) looks like. 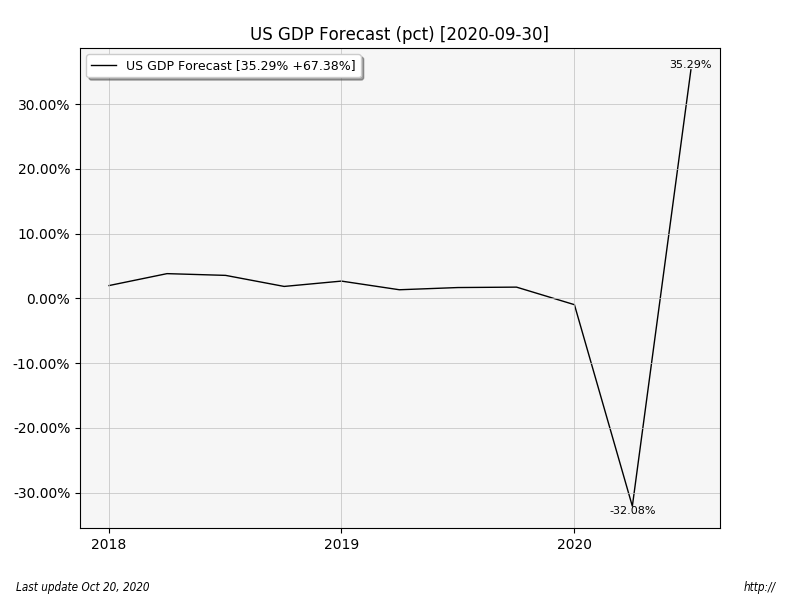 Note that the projected Q3 35% gain is annualized; this boils down to an +8.82% Q/Q increase in Q3, which neatly retraces the -8.02% drop in Q1/Q2.  It will certainly be the largest gain in history.  I’m guessing Trump might mention this at his rallies.

This is what 3.4 trillion in deficit spending will get you.  Trump gets to talk about it, but we are paying for it.  One way or another. 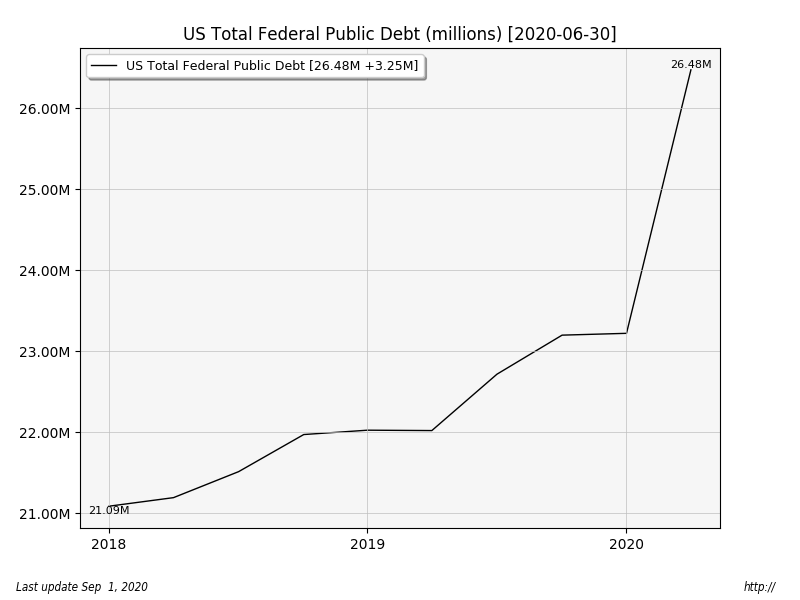 Nothing free in this world.

So GDP is about $5.4 trillion per quarter.  The Q3 increase of 8% of the pre-crisis value is $430 billion.  $0.43 trillion in GDP growth took  $3.25 trillion in deficit spending for about 13% efficiency.  To be really generous, let’s subtract out the $1 trillion deficit average over 2018-2019, there’s about $2.25 trillion in extra deficit spending, about 19% of which showed up in increased GDP.  That doesn’t sound very promising.  I doubt the increase has much staying power as little to none of it was real investment, just pulling spending forward.

I agree with your GDP numbers.  The theory was, if we papered over the plunge with borrowed money, and “things got back to normal”, there would be no economic dislocation and things would resume where they left off.

That won’t happen with airlines, or with restaurants, or hotels – or anywhere in travel, really.  So that destruction will happen.  It will just happen a bit later on.

An interesting question to ask might be, why was this support so inefficient?  How come we couldn’t just replace GDP dollar for dollar with borrowed money?

Presumably someone got that extra inefficient cash, right?

Am I wrong here?

You are most definitely correct Dave.

Someone got it and did something non-productive like buying stocks or other equity, buying back their own company’s stock, paying down debt, buying real estate at inflated prices or socking it away as cash in bank accounts that was obviously not loaned back into the economy.

Microstrategy’s treasury holdings in BTC went up over $100 million in the last three months.

What an idiot Mike Saylor is. His treasury could have gone up $100 if he had bought gold instead of  BTC. Oh well I am sure he will figure out his mistake. lol

Oh wait the internet is going to crash and we will get hit by an asteroid. I hope he has a garden.

I get the sense you aren’t having a great time with life right now.  I hope it gets better for you soon.

Conversely, looking at the recent 3 month period for gold noted above, if Saylor’s 425 million were in gold, he would have had a return of 93.5 million dollars, not a shabby figure when compared to the 100 million dollars from BTC.  And that is in an asset with a very long, solid, proven history of safety.

Personally, the impression I’m getting from seeing so many people talking up their BTC book online and in the news (including Saylor), is of a situation having many of the characteristics of the “pump” phase of a “pump and dump” scheme.  It’s just a little too “exuberant” for my tastes.  YMMV.

Here’s a fun monthly chart I’ve been working on refining in the background.  I’ve greatly reduced the influence of more conventional ratios in the model, and I’ve added Armstrong’s cycle timing as a primary input.  You can see the influence of this in the blue forecaster line.

Curiously, Armstrong himself said that gold had a 5.6 frequency cycle timing, but when I used that as the frequency, things just didn’t work out as well.

Anyhow, it sure seems as though gold is in a fairly major down cycle right now in terms of the timing; we just have to wait for that to run its course. 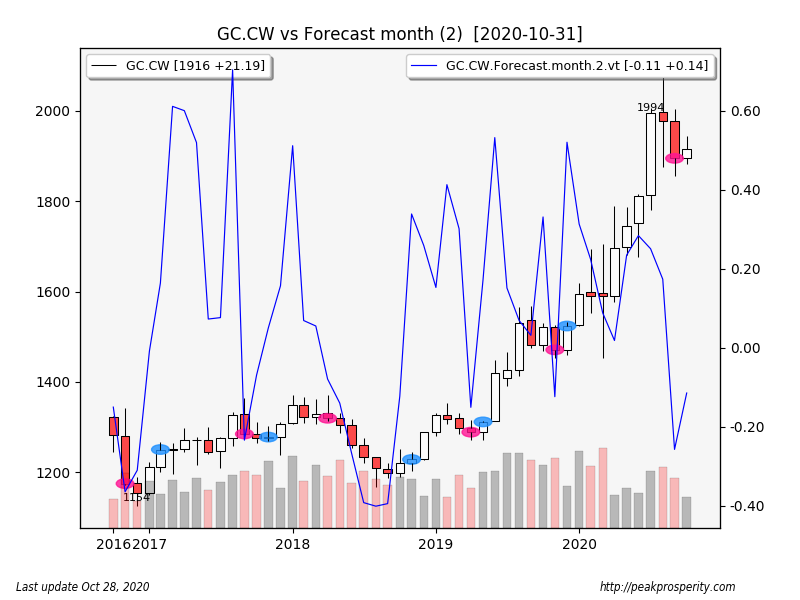 I agree with your basic observation that time periods can be cherry-picked to show what someone wants to show, therefore I want to make three observations drawn from the now 11-year history of BTC.

The first is that in the period 2009 – 2020 BTC has significantly outperformed gold despite the high volatility of BTC.

The second is that there is no 4-year period in which a BTC stalwart has lost money. While it is true that BTC can gyrate wildly from high to low, it does so on a predictable 4-year cycle. That means the market could be timed for those who wish to do so.

The third is that despite the volatility, BTC always posts higher lows on the low extremes and settles into a midpoint that is higher than previous cycles.

Do investors and speculators play games with BTC’s price and flow? Of course. It turns out, though, that those games are just froth over the surface of a deep current that runs like clockwork – and that clockwork character of the current is why the committed core does not panic when the highs plunge, nor lose hope when during the 18 months just prior to a new halving when the coin trades inconclusively sideways.

Past history is no promise of future performance, of course. But even if Saylor is engaged in a pump and dump scheme (I don’t think he is, but I recognize he could be), that, too, would just be froth.

Additionally, given the rapidly increasing institutional and big money interest in BTC, if he does dump, there is every reason to expect a willing market of new institutional buyers who understand the cyclical nature of the BTC dynamic and the reason for its relentless asymmetrical upside trajectory will be happy to buy all the coin he chooses to shed – especially if they can pick it up during the next low. Heck, I’d try to get my pittance share, too.

Lyn Alden does a great job of explaining, here, in market analyst terms why she turned bullish on BTC in April this year, and plans to hold for at least a 2-year period (corresponding, I’ll note, to the current cycle’s uptrend). You might find it informative.

This chart by pseudonymous PlanB illustrates the history of BTC growth within its cyclical pattern in comparison to what his stock-to-flow cross-asset model predicts. (Posted October 21 on his Twitter feed.) 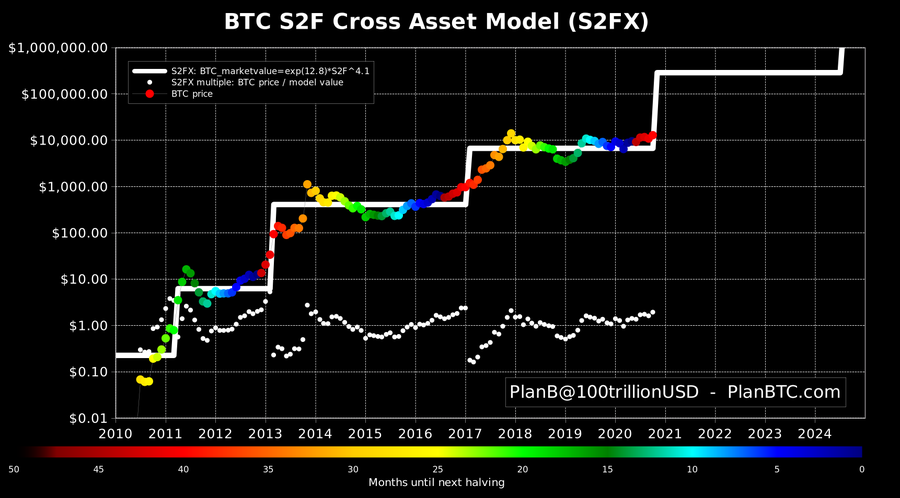