Gold fell -1.70 to 1265.00 on moderate volume, while silver rose +0.06 to 17.59 on moderate volume also.  PM prices bounced around today, driven up first by a NAI report which suggested contraction (although less contraction than the prior month), and then lower following a PMI flash manufacturing index which showed some surprising expansion.  Put more simply, gold popped at 08:30, and it fell again at 09:45, with the round-trip ending more or less back where it started.

On the chart, gold printed a high wave candle – this candle did not give us much of a clue where we go next.  The small drop did take gold below its 9 EMA.  Really, not much happened.

The December rate-rise projection remains at 68%. 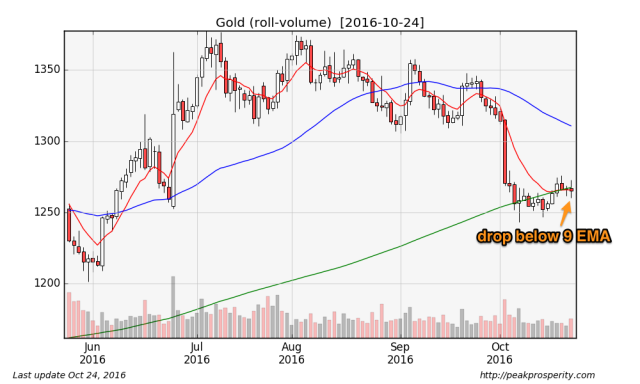 Silver rallied fairly hard after the 08:30 NFI report, later plunging along with gold following the flash PMI at 09:45, generating a shooting star candle on the day, which suggests a failed rally.  Still, silver managed to spike above its downtrend line, it did close up slightly, and it outperformed gold.  The failed rally didn’t look too bearish, and in fact it could be interpreted as a mild swing low in addition to being a failed rally.  Let’s say silver is mildly bullish. 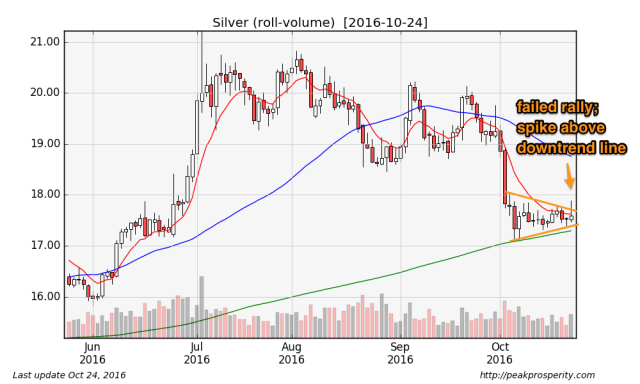 The miners opened higher, but then sold off for much of the day following the plunge in PM that started at 09:45.  GDX fell -2.13% on moderate volume, while GDXJ dropped -2.77% on moderately heavy volume.  The “opening black marubozu” for GDX was relatively bearish; candle code gives it a 28-44% chance of marking a high.  GDX ended the day below the 9 EMA, but the price drop seemed to find support at the 200 MA.  Its unpleasant, but it could have been worse. 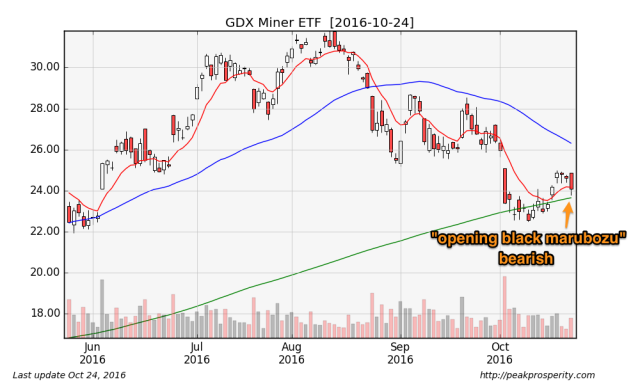 USD moved slowly higher today, up +0.06 to 98.70, making a new high for this move.  Trading range was relatively narrow, and the USD printed a spinning top, which wasn’t bearish.  The dollar is fairly overbought right now, but shows no signs of stopping its upward momentum, at least for now.  This will continue to put pressure on PM.  Gold can rally alongside the dollar – but it is really swimming upstream to do so.

Crude fell -0.51 to 50.49.  The drop was much heavier earlier in the day, with oil hitting a low of 49.62 just after mid-day before bouncing back.  The reversal ended up printing a large but only mildly bullish hammer candle, a 19-24% chance of a low.  The day ended with crude closing just below its 9 EMA.   Oil may be starting to weaken here; unless we can get a close above today’s high, I’m concerned that crude might take a more significant tumble in the very near future.  I suspect tomorrow’s API report will be key.

CRB rose +0.33%, managing to move back above its 9 EMA.  CRB is moving slowly higher, with livestock and industrial metals moving the average higher today.

So the miners looked bearish, silver was mildly bullish, gold might have been neutral.  My eye is on the buck; if it continues the relentless move higher – you know what I’m going to say next.  Gold doesn’t much like dollar rallies.

The ""markets"" were selling off and the VIX had just crossed into important bear territory when – surprise! – the DOE completely reversed the API report (which reported a larger than expected BUILD) and reported a DRAW.

Now, I am prone to thinking that nearly all ""markets"" are in full shenanigan mode right now, I confess to that, but that comes from having a lot of context and possibly too much information.

I knew that a major 400,000 barrel per day pipeline taking oil away from Cushing had broken a few days ago, so I wasn't surprised to hear of a build.

(AP) — A Seaway Crude Pipeline Co. pipeline that spilled oil at a storage hub in Oklahoma remained closed Tuesday, according to a spokesman for Houston-based Enterprise Products Partners, a 50 percent owner of Seaway.

"As of right now we don’t have an estimate of when it will be back up," as officials are trying to determine the cause of the spill that happened shortly before midnight Sunday in Cushing, spokesman Rick Rainey said.

CUSHING, Oklahoma – While crews in Cushing continue to clean up oil after a pipeline break early Monday morning, the spill is stoking fears about what may be to come for the nation’s oil hub.

The Seaway Pipeline is one of the largest in the nation, running 500 miles from Cushing to refineries in Freeport, Texas. Because it's two pipelines, the owning company Enterprise could shut down one and keep oil flowing, but only 450,000 barrels per day.

The section of pipe that burst can carry 50,000 barrels of oil or roughly 2.75 million gallons.

So right on top of the reported build and right on top of a major break in one of the largest oil pipelines carrying crude AWAY from Cushing, what's a ""market"" manipulating government lackey to do?

Why report a surprise DRAW, thereby spiking oil, and indeed the entire US equity ""markets" because, such as.

This all feels about as believable as anything else this (s)election cycle.