Equities had some heavy losses in the futures markets overnight – that sent gold up to a new high of 1247.  However once equities started to rebound, gold fell, and it just kept moving lower into the close.  The spinning top candle was a bullish continuation, and gold forecaster jumped +0.29 to +0.27 which is a buy signal for gold. Yesterday’s sell signal was right on the edge. Gold is in an uptrend on both the daily and weekly timeframes; gold/Euros is in an uptrend in all 3 timeframes, and has closed above the 200 MA for the first time since May.

Rate rise chances (December 2018) fell to 73%. Looks like traders think the Fed is less likely to raise rates if the equity market sells off. I’m not so sure they are correct. 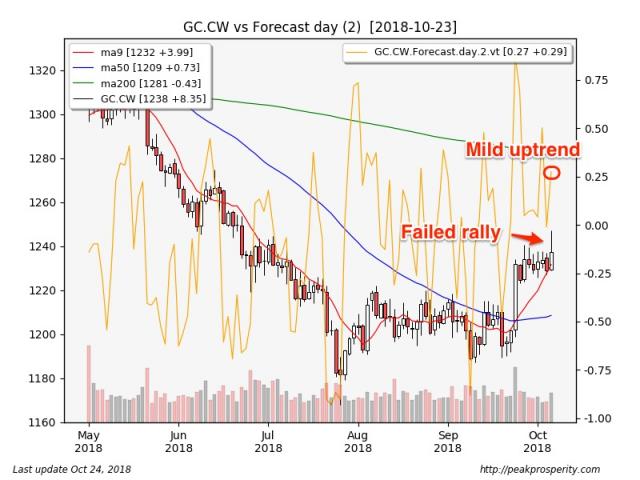 Silver also rallied strongly on the equity market sell-off, making a new high to 14.84 before coming back down towards end of day.  Silver’s long white candle was neutral, while forecaster jumped +0.28 to +0.44. Silver is now back above both the 9 and 50 MA lines. The move also caused the weekly forecaster to issue a buy signal. Currently silver is in an uptrend in both the daily and weekly timeframes.  While silver looks pretty trendless on the chart, the forecaster is suggesting that silver may be preparing to break out to the upside.  It is at the top of its recent trading range.

The gold/silver ratio fell -0.46 to 83.45. That’s bullish; the current level for the ratio suggests PM could be at or near a long term low. 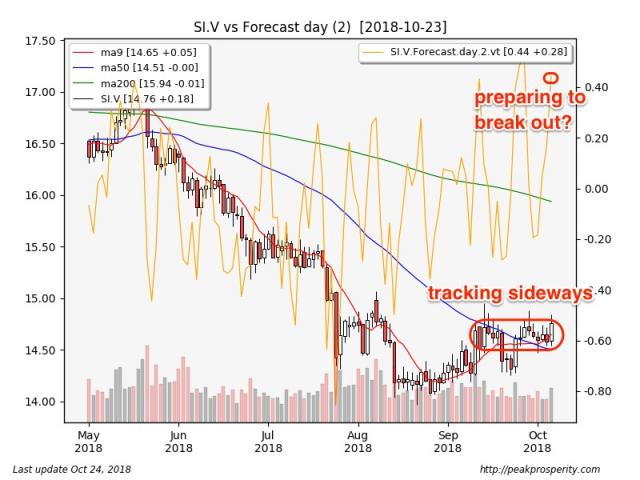 Miners gapped up at the open, and then spent the day selling off. GDX rose +1.21% on heavy volume, and GDXJ climbed +1.37% on heavy volume. XAU rose just +0.67%; it looked a whole lot like a failed rally today for the miners. The spinning top candle was bearish (44% bearish reversal), while forecaster moved up +0.06 to -0.05, which is still a downtrend. Today’s move did manage to convince the monthly to issue a buy signal; that brings the miners into an uptrend on both the weekly and monthly timeframes. While the daily chart looks iffy, the monthly looks much better, with a very strong swing low currently in place. Let’s hope we close around these levels by end of month. 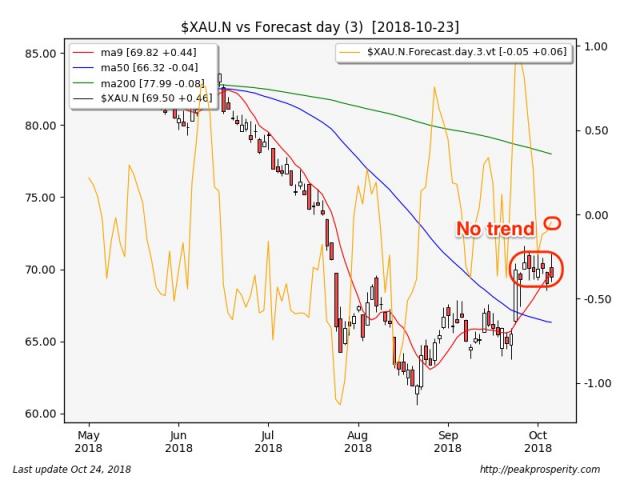 Platinum climbed +1.33%, palladium rose +1.50%, while copper fell -0.76%. Platinum is in a weakening uptrend, palladium just made a new all time high, while copper looks unsure if it will continue its 6-week rally off the lows.

Crude was smashed, plunging -3.38 [-4.86%] to 66.23. The opening black marubozu was a bearish continuation. Forecaster plunged -0.39 to -0.51. Today’s move took crude through its 200 MA; cude is now below all 3 moving averages. Monthly forecaster also issued a sell signal – the first one in 15 months although it assumes we close at these levels at end of month. Crude is now in a downtrend in all 3 timeframes. I can’t really tell you why oil is crashing; there is no specific news. It appears to be linked to equities, although loosely; bad days in SPX usually end up with bad days in crude. There is probably also the current US-Saudi difficulty, which suggests that sanctions on Iran are unlikely to remain in place. That’s just a guess though. My sense is, oil started to sell off as the Khashoggi matter became more serious. 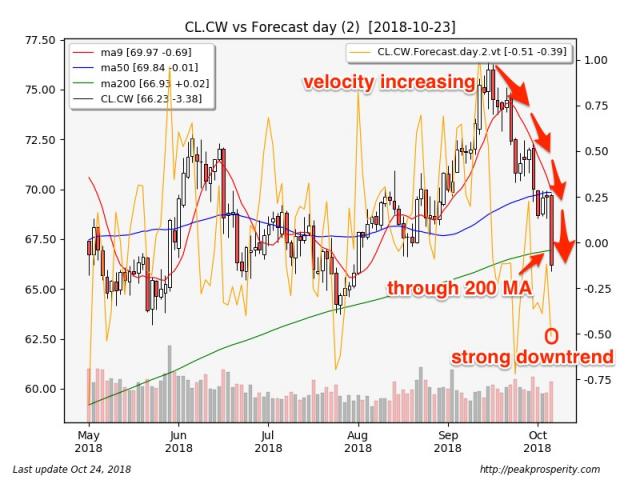 SPX fell -15.19 [-0.55%] to 2740.69. SPX had a wild day, down almost 65 points at one point before recovering most of its losses. A sell-off right before the close kept the candle from being too strong, however even the spinning top that was printed resulted in a 53% bullish reversal – it was a very highly rated spinning top. The forecaster moved lower, down -0.06 to -0.51. Today’s drop caused the monthly forecaster to issue a sell signal, assuming we close here at end of month. Likewise, the swing high that is forming on the monthly chart also looks quite serious. Short term, we probably bounce. Longer term, things appear to be headed lower. That’s how the tea leaves look right now.

JNK fell -0.06%; initially JNK gapped down and sold off, making a new low, but rebounded along with the equity market. The long white candle was a possible bullish reversal (36%), but forecaster remains in a downtrend. This could be a rough double bottom for JNK.

We are seeing a really clear pattern right now. Selling pressure in equities results in money flows into gold, silver, as well as longer term bonds, at least to some degree. Today was the first decent rally in bonds I’ve seen in a while – and it would have been quite strong had equities not bounced back so vigorously. That tells us that if the equity market sell-off continues, we should expect at least some sort of bond rally.

Miners don’t looks great; I saw this in 2008 also. Gold would rally, but mining equities would get caught up in the equity market downdraft, and they would end up being sold. The larger mining companies are part of various indexes, and when the index gets sold, so do the shares of the miner.

Some part of the nervousness in equities could also have to do with the upcoming elections here in the US.  The market probably assumes the Democrats will start impeachment proceedings if they win the House, and that prospect is generally negative for risk assets.  So far at least, that’s looking like a likely outcome.

As I said in the equity section, I think we probably bounce from here, but the momentum looks to be pointing lower in the longer term.