Gold fell for most of the day, bottoming out at 10:15 am, and then bouncing back somewhat into end of day. The long black candle was a possible bullish reversal (38%), but forecaster fell, dropping into a downtrend. Gold is in a downtrend in both the daily and weekly timeframes.

Gold/euros dropped -11.30 [-0.69%] to 1617.41 on moderate volume. The long black candle was a possible bullish reversal (37%), forecaster dropped, dropping into a downtrend. Gold/euros is in a downtrend in both the daily and monthly timeframes.

Finally we see some short-covering on a decline – that’s good news. The candle print was possibly bullish (!), but gold did seem to run into resistance at the 50 MA, which didn’t look great, and it ended the day below both the 50 and the 9 MA lines. The rally in the buck didn’t help either. 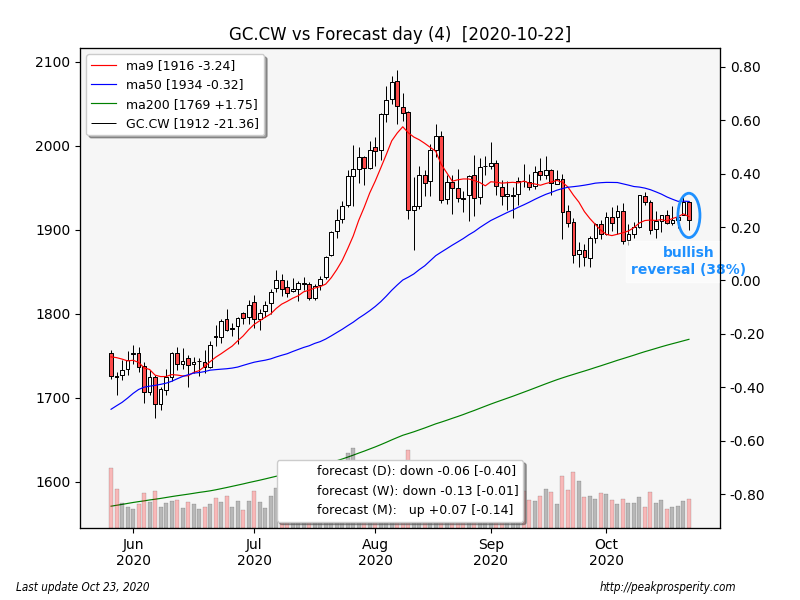 Like gold, silver fell for much of the day, bottoming around 10:30 am, and then moving higher through the close. The opening black marubozu candle was a bearish continuation, forecaster dropped, but remains in an uptrend. Silver is in an uptrend in the daily and monthly timeframes.

No short-covering for silver; the decline didn’t look as bad (at least on the chart), and silver managed to end the day above its 9 MA, and in an uptrend as well. Silver is looking just slightly more healthy than gold. 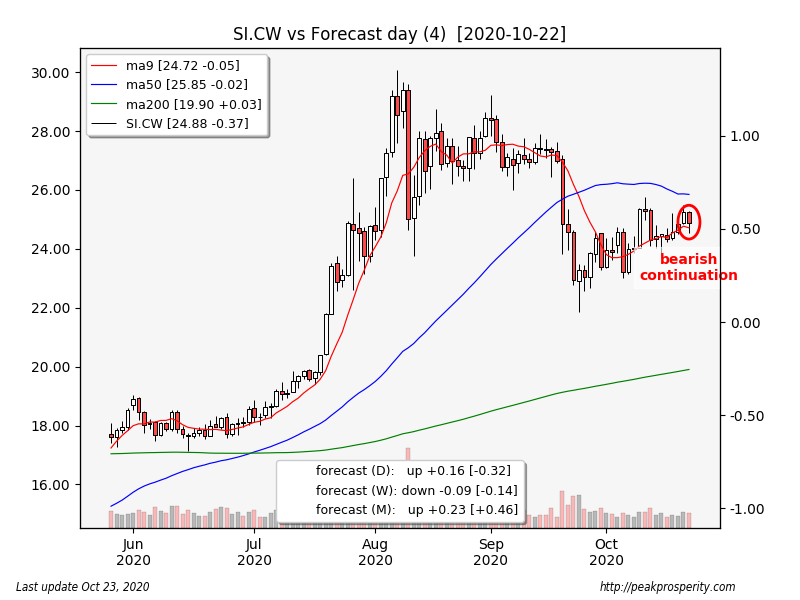 Miners gapped down at the open, then fell for the first 90 minutes – but afterwards, they rallied all the way through to the close. GDX dropped -1.83% on moderate volume, and GDXJ fell -1.82% on moderate volume. XAU moved down -1.13%, the takuri line candle was a possible bullish reversal (39%), but forecaster dropped, moving deeper into its downtrend. XAU is in an uptrend in the weekly and monthly timeframes.

All of the losses came on the morning gap down open; after the first 90 minutes, the dip-buyers appeared, wiping out the intraday losses. This was a reasonably bullish print, although forecaster wasn’t convinced. The miners remain below both the 9 and 50 MA lines, and in a short-term downtrend. 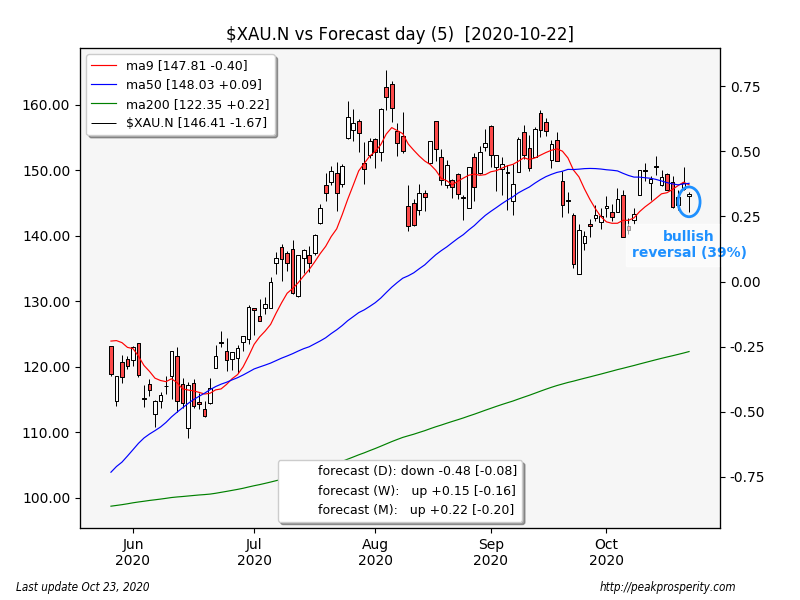 Copper fell -0.03 [-0.94%] to 3.16 on moderate volume. The bearish harami candle was a bullish continuation, forecaster dropped, but remains in an uptrend. Copper is in an uptrend in all three timeframes.

Copper took a break today. The harami print wasn’t bearish, but forecaster looks worried; the large plunge was almost enough to cause a reversal. 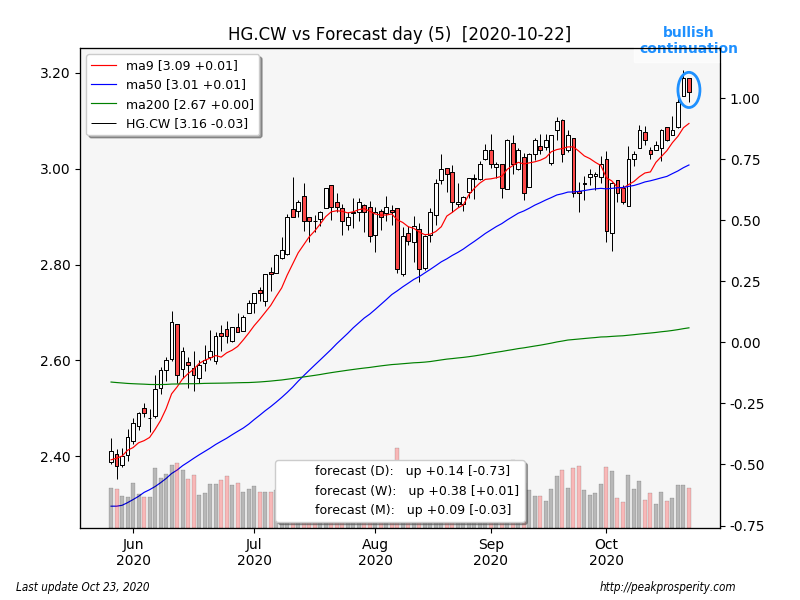 The buck climbed +0.36 [+0.39%] to 92.94 on moderately light volume. The bullish harami candle was a bearish continuation, forecaster climbed, rising into an uptrend. The buck is in an uptrend in the daily timeframe.

While the harami print wasn’t a bullish reversal, today’s move was enough to turn the forecaster around – just barely. While formally the buck is back in an uptrend, in truth the trend forecasts are almost completely flat. The tea leaves are providing no clue where we go next. 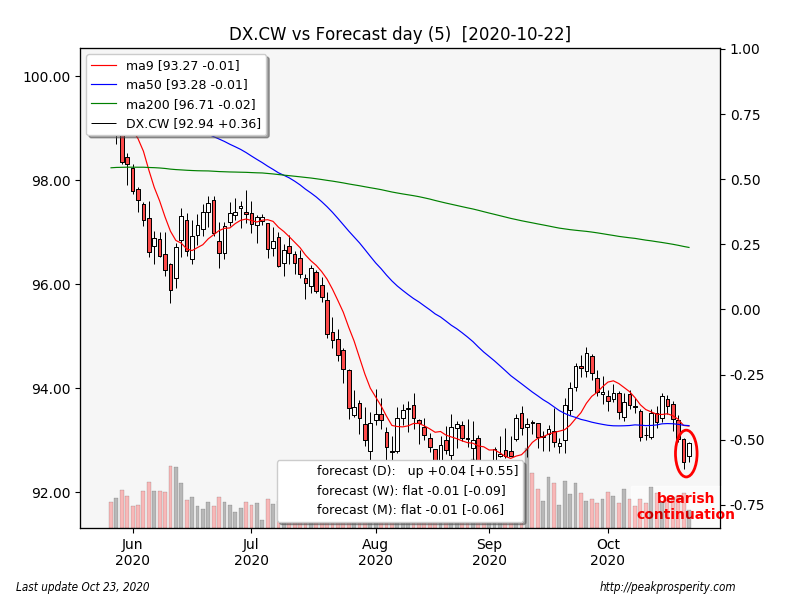 Crude rallied +0.62 [+1.55%] to 40.66 on moderately light volume. The bullish harami candle was a bearish continuation, forecaster climbed, but remains in a downtrend. Crude is in a downtrend in both the daily and monthly timeframes.

Yet another harami pattern that yields no reversal. They normally aren’t this horrid (its about a 1:3 chance), but the pattern is one of the weakest 2-candle patterns I track. Price moved right up to the 50 MA and ran into resistance – crude is not out of the woods just yet. 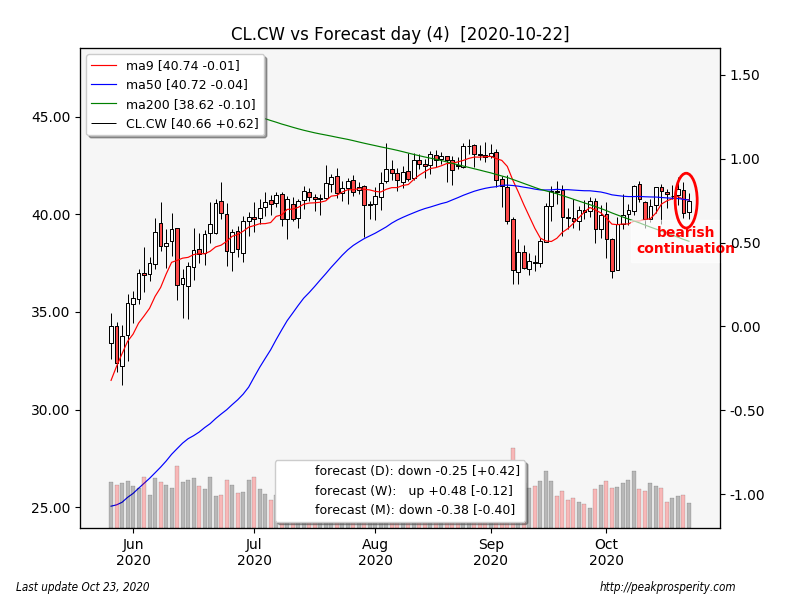 NYSE advance ratio was 69%, which was moderately bullish. The candle print was reasonably strong, forecaster was happy, it looks like SPX found some support near the 50 MA, and the sector map was reasonably positive. Let’s call this a probable reversal for SPX. 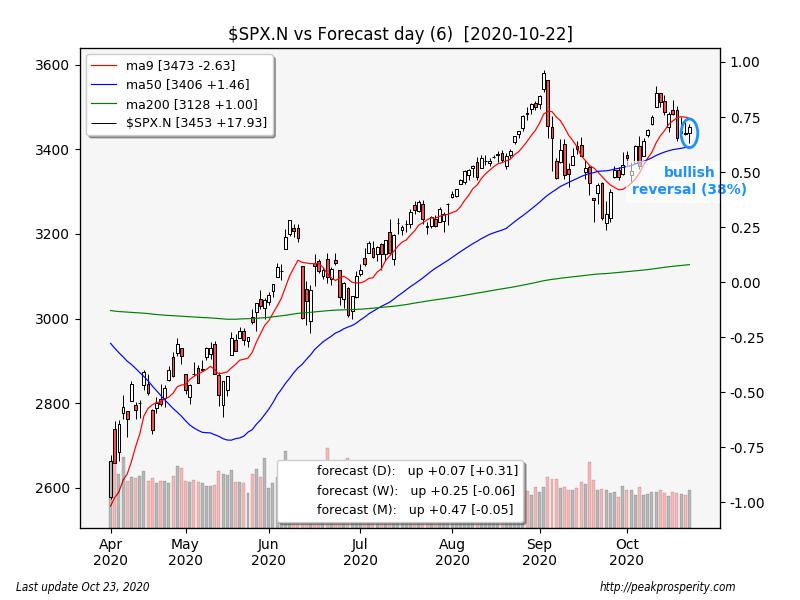 TLT fell -1.04%. The closing black marubozu candle was a bearish continuation, forecaster dropped, moving deeper into its downtrend. TLT is in a downtrend in both the daily and weekly timeframes. The 30-Year yield rose +6.0 bp to +1.68%.

TY dropped -0.23%. The long black candle was a bearish continuation, forecaster dropped, moving deeper into its downtrend. TY is in a downtrend in all three timeframes. The 10-Year yield rose +3.0 bp to +0.86%.

Bonds are really starting to look bad; RSI-7 for TLT is 18, which is fairly oversold. Note this is after $25 billion in treasury purchases by the Fed this week. What would they look like without all that money printing? For quite a while I didn’t include bond charts due to no signal. But they are sure saying something now. 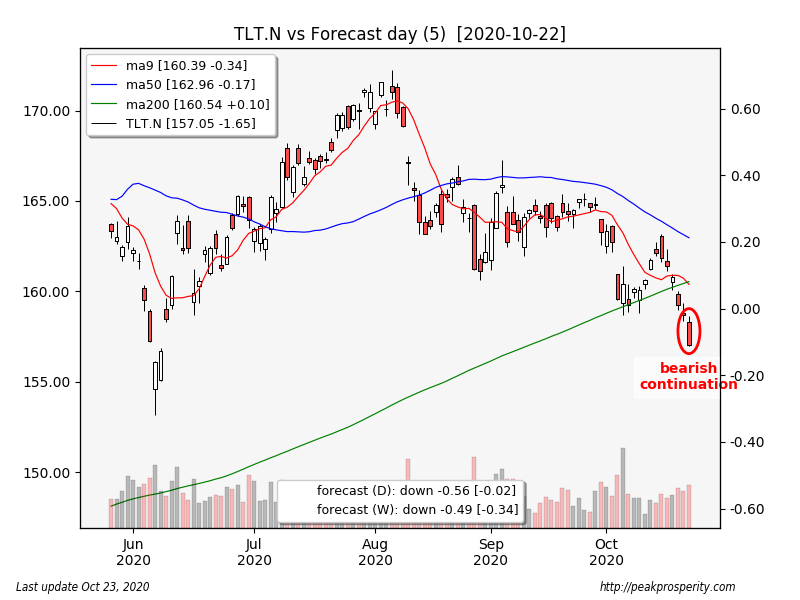 JNK climbed +0.16%. The long white candle was neutral, forecaster climbed, moving higher into its uptrend. JNK is in an uptrend in the daily timeframe.

Crappy debt has been moving sideways for about a week now – seeming to find support at the 50 MA. 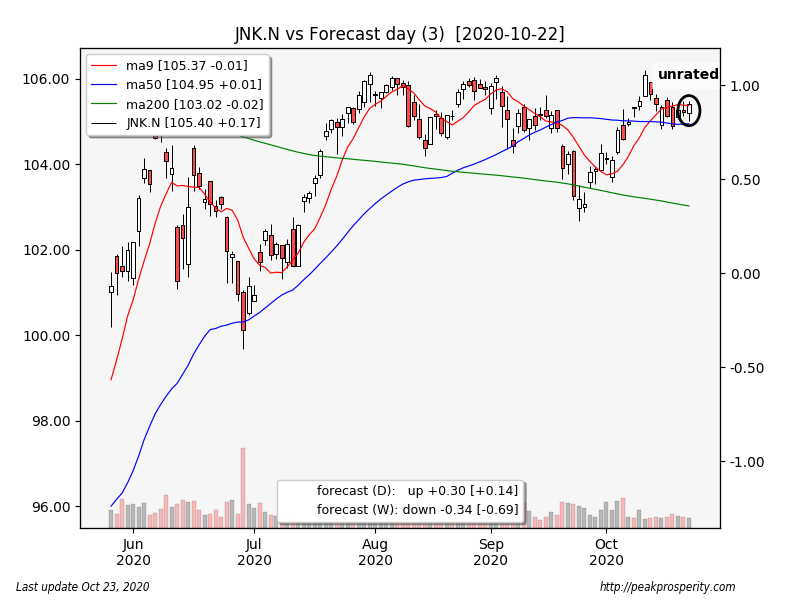 The GLD ETF tonnage on hand dropped -3.80 tons, with 1266 tons remaining in inventory.

Gold, silver, and the miners fell today, with the miners looking strongest. The takuri line candle print for XAU looked pretty good – although certainly not a guarantee of a reversal. XAU needs confirmation tomorrow. Platinum also looked strong – the buyers showed up to buy the dip for platinum.

Risk assets were mostly positive; SPX, crude, and crappy debt all moved higher, while copper retreated off the two year high it made yesterday. SPX has probably put in a near-term low. At least given current newsflow anyway.

The buck is trying to reverse, but its hard to know if it managed to do so today. I really have no idea where it goes next – the trends are all flat.

The mute button was declared the winner of the final Presidential debate last night. How many Trump supporters were secretly approving of the Debate Commission’s microphone-mute strategy? We will never know. And the moderator, at least according to my observation, did a relatively impartial job. In this incredibly polarized climate: “it’s a miracle!”

No news on stimulus.

And speaking of which, member Redneck Engineer provided a link which reminded me of some important charts – the primary chart being the debt/GDP ratio. Understanding for a moment that the horrid leap higher in the ratio is driven by the double-whammy of rising debt from stimulus spending, and falling Q2 GDP due to the pandemic response, the thing still has the US at a ratio of 135%. This makes us look a whole lot like Italy. Holy crap. If this is what the US looks like, how must things look in Spain? 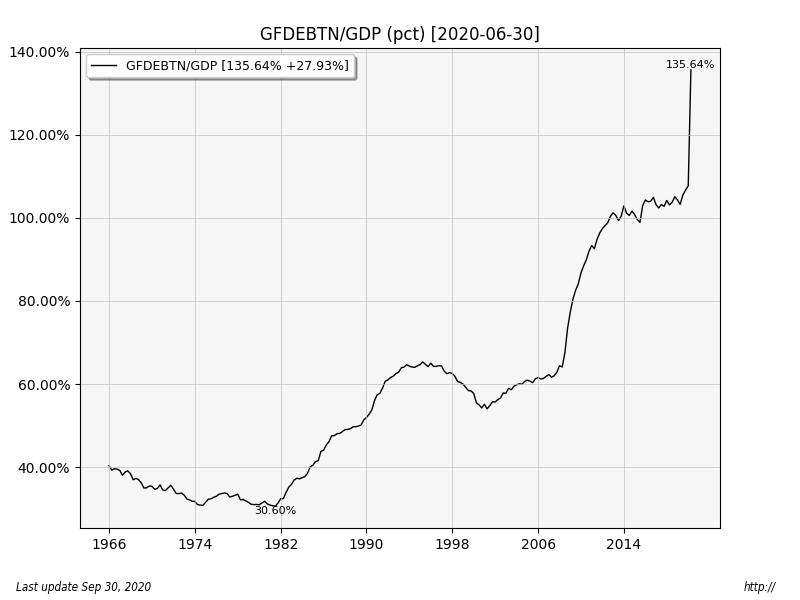 Last thing. I saw a bit of good news today – especially for the Team Blue “lockdown states” – they seem to be recovering from the very high levels of unemployment. Imagine that: good news! While California lags, New Jersey and New York improved substantially in September. 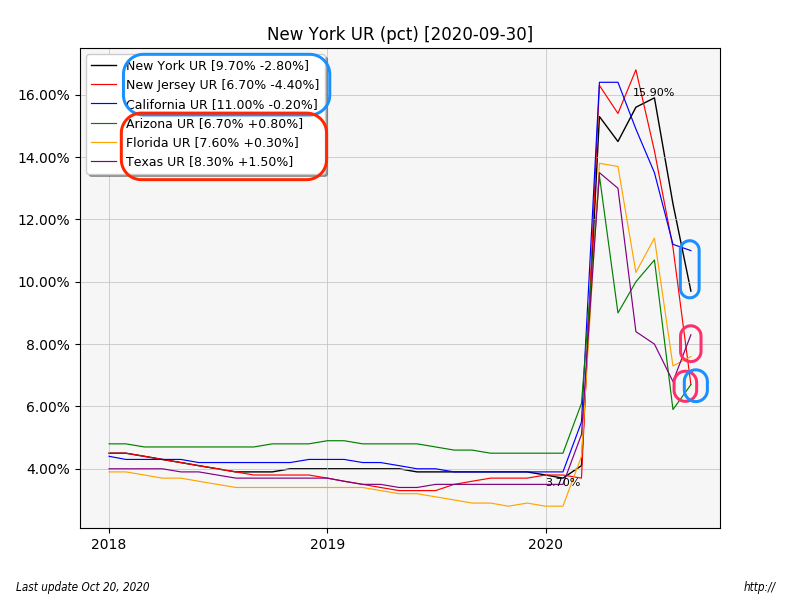 No one ever comments on Fridays.