Gold moved lower in Asia and London, then bounced back in the afternoon in the US. The short white candle was unrated, forecaster dropped, moving deeper into its downtrend. Gold is in a downtrend in both the daily and weekly timeframes.

Gold/euros climbed +14.11 [+0.87%] to 1639.46 on moderate volume. The swing low candle was neutral, forecaster climbed, moving higher into its uptrend. Gold/euros is in an uptrend in the daily and weekly timeframes.

While gold’s early decline was driven by a dollar rally, the bounce in gold that happened towards end of day occurred independently of the buck. What’s more, we saw a large number of contracts standing for delivery at COMEX.  Gold/Euros is starting to look reasonably positive at this point – a close above the 50 MA (about 20E away) would be a positive sign. 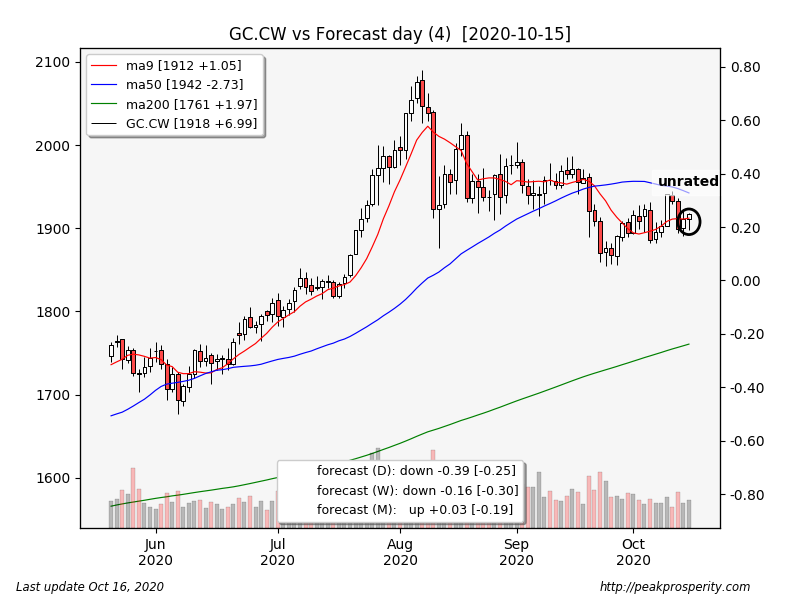 Silver fell steadily in Asia and London, bottomed out just after 9 am, then rallied through end of day, recovering all the earlier losses and a little bit more. The dragonfly doji candle was a bearish continuation, but forecaster dropped, moving deeper into its downtrend. Silver is in an uptrend in the weekly and monthly timeframes.

We saw a reasonably strong buy-the-dip action in silver today – and it happened in the face of a large dollar rally too. Forecaster wasn’t convinced, but I thought it looked positive enough. As with gold, silver’s afternoon rally occurred independently of currency movement. 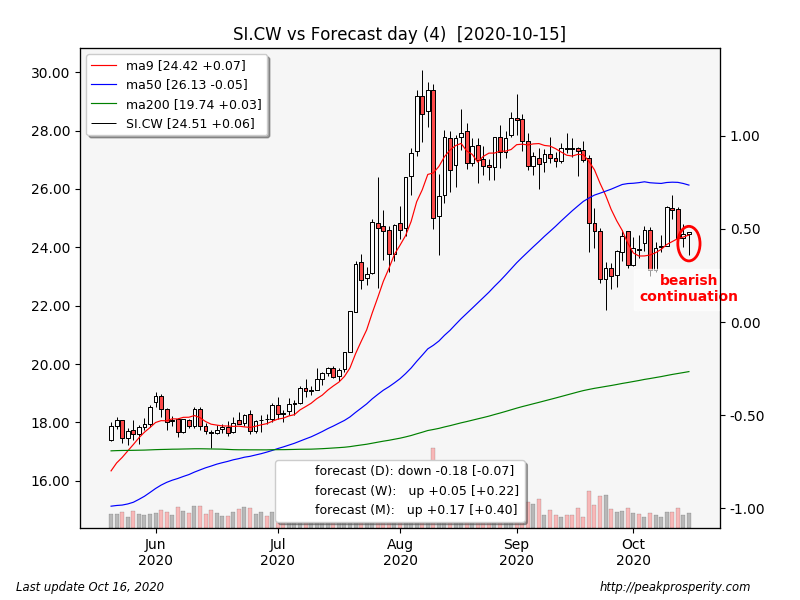 The miners gapped down at the open, and mostly just chopped sideways during the trading day. GDX fell -1.61% on moderate volume, and GDXJ dropped -1.60% on moderately light volume. XAU moved down -1.07%, the swing high candle was neutral, but forecaster fell, moving into a downtrend. XAU is in an uptrend in the weekly and monthly timeframes.

While the candle print wasn’t bearish, the daily forecaster didn’t like today’s action very much. Still, price remains above all 3 moving averages, and not far from the recent highs. 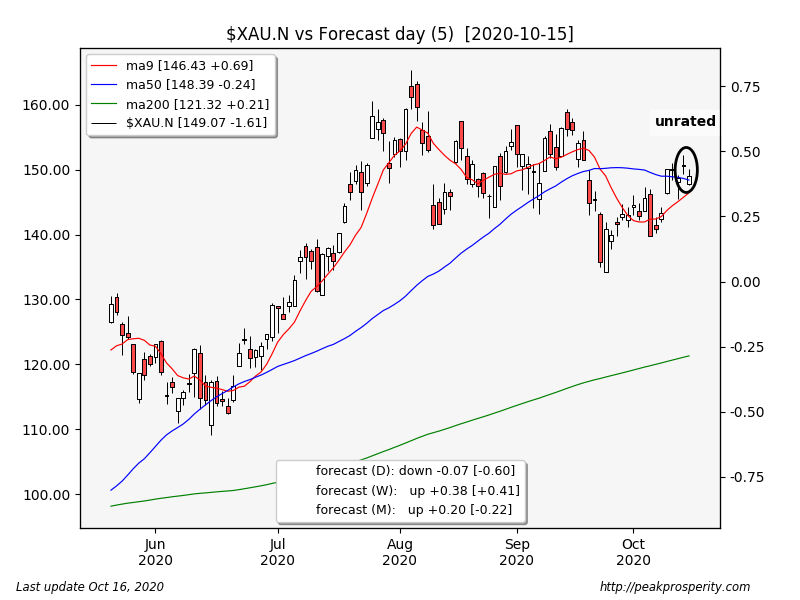 Copper climbed +0.03 [+0.98%] to 3.08 on moderate volume. The short white candle was a low-percentage bearish reversal (25%), forecaster dropped, but remains in an uptrend. Copper is in an uptrend in all three timeframes.

Copper is close to a breakout to new multi-year highs. 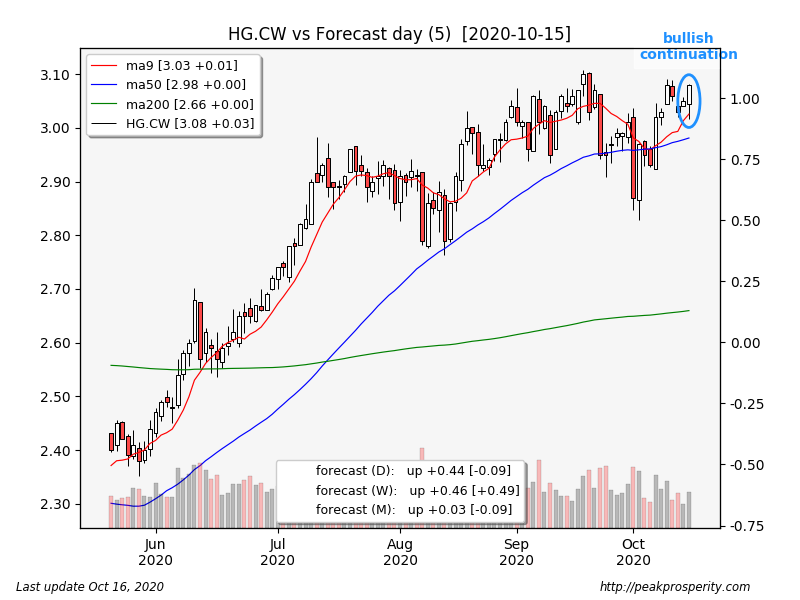 The buck climbed +0.50 [+0.54%] to 93.85 on moderately light volume. The short white candle was a bullish continuation, forecaster climbed, rising into an uptrend. The buck is in an uptrend in the daily and weekly timeframes.

Today’s move saw the buck move back into an uptrend – back above the 9 and 50 MA lines – it all looks fairly positive. The remarkable thing for us was that the substantial rally in the buck didn’t end up smashing the price of gold and silver. That’s new. 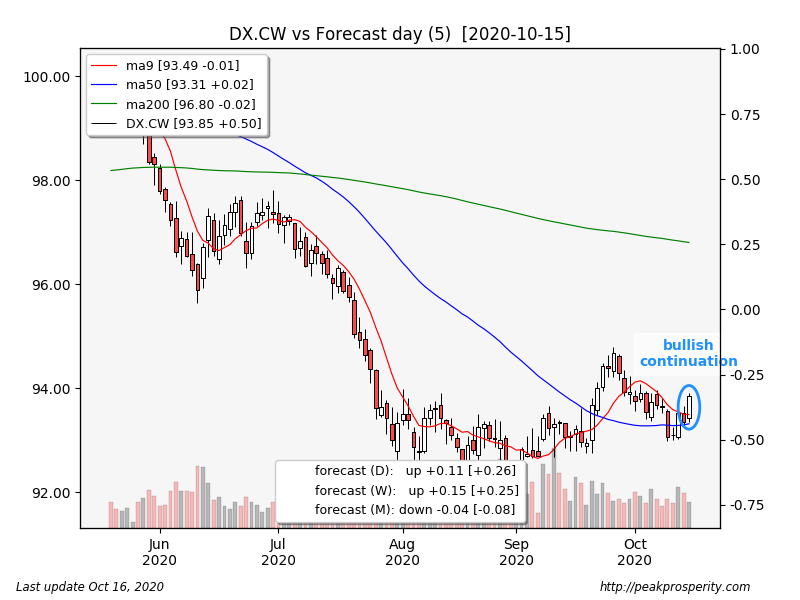 This aligns with what I was talking about yesterday regarding the Euro; that “lower high” in the Euro is looking more and more like a thing. I wish I had a decent daily chart, but I don’t have OHLC charts for currencies. Here’s the best I’ve got. You can see the lower high; a break below 1.16 would confirm the trend. And maybe it won’t destroy PM – wouldn’t that be nice? 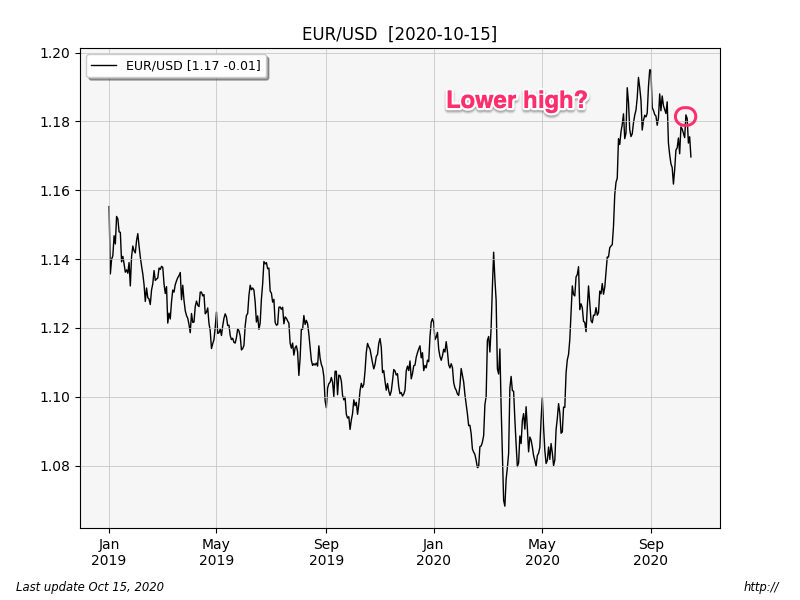 Crude dropped -0.18 [-0.44%] to 41.19 on moderate volume. The spinning top candle was a possible bearish reversal (31%), forecaster dropped, dropping into a downtrend. Crude is in a downtrend in both the daily and monthly timeframes.

EIA Report: crude -3.8m, gasoline -1.6m, distillates -7.2m. This was a bullish report, and it seemed to materially contribute to the rebound in crude.

Crude, like gold, sold off early, bottoming out around 9:10 am, and then shot higher for the remainder of the day. Forecaster didn’t like today’s price action for some reason; neither did the candle code. Maybe that long lower shadow is a sign of something-unpleasant-to-come. 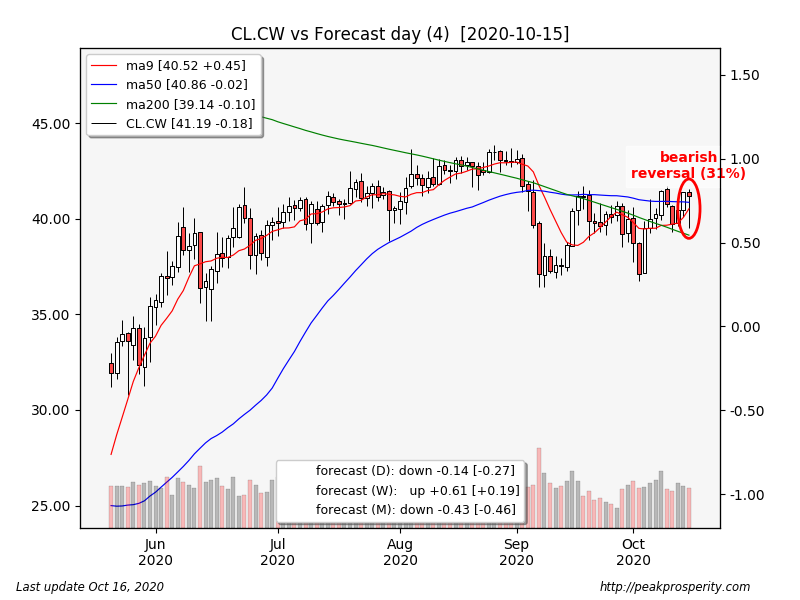 SPX fell -5.33 [-0.15%] to 3483.34 on moderate volume. The short white candle was a bearish continuation, forecaster dropped, moving deeper into its downtrend. SPX is in an uptrend in the weekly and monthly timeframes.

As with the other items, equities sold off in the futures markets overnight, but rallied after the open all the way through to the close, wiping out most of the overnight losses. NYSE advance ratio was slightly bullish (56%).  SPX still doesn’t look as though it is in any hurry to correct. 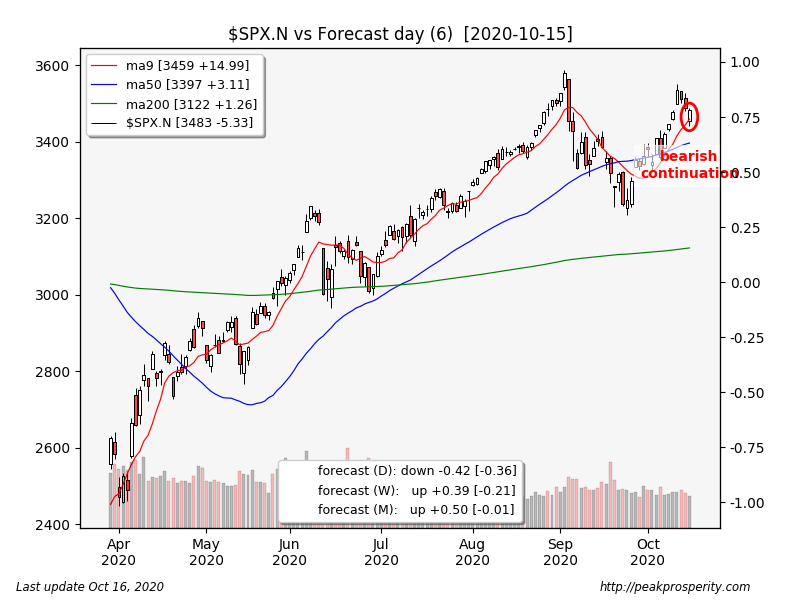 TLT dropped -0.17%. The short black candle was a low-percentage bearish reversal (22%), forecaster climbed, moving higher into its uptrend. TLT is in an uptrend in the daily timeframe. The 30-Year yield rose +2.0 bp to +1.52%.

TY inched down -0.08%. The short black candle was a bullish continuation, and forecaster dropped, but remains in an uptrend. TY is in a downtrend in both the weekly and monthly timeframes. The 10-Year yield rose +1.0 bp to +0.74%.

Not much changed for bonds today.

JNK inched down -0.06%. The short white candle was a bearish continuation, forecaster fell, dropping into a downtrend. JNK is in an uptrend in the weekly timeframe.

Crappy debt looked an awful lot like equities today; forecaster found that to be bearish. Still, JNK doesn’t appear to be in any hurry to correct. 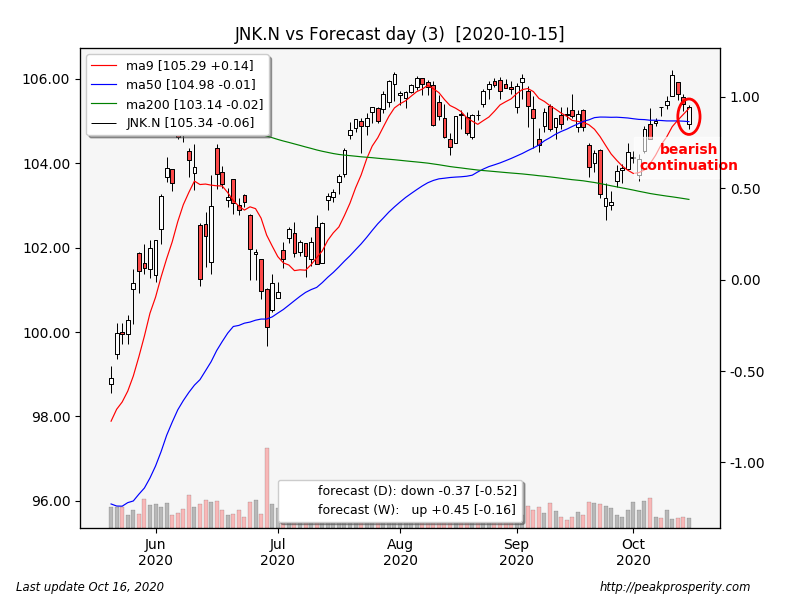 The GLD ETF tonnage on hand dropped -1.88 tons, with 1276 tons remaining in inventory.

Discounts for physical ETFs remain wide, and premiums for the big bars remain relatively low. I think this is generally bearish for PM.

Gold, silver, but not the miners rallied today; miners broke from recent performance trends and looked weak. The overall move in gold-and-silver was actually reasonably positive, given the strong rally in the buck.

Also, we saw a decent amount of standing-for-delivery of GC contracts at COMEX, which was a positive sign too.

Risk assets were mixed again; very mild declines in SPX, crappy debt, and crude, and a decent rally for copper, which may be ready to break out to higher levels once again.

I think the decline in the Euro (resulting a rally in the buck) is starting to become a thing, and my guess is, it is driven by all these restrictions being imposed by governments across the pond.

In Europe, there are lots of scary new infections – but still, few deaths. I give full credit to whatever marketing genius that thought of funding the realtime stats collections for SC2 infections; this guy or gal (along with the media) provides a daily grade to politicians worldwide. More positive tests? You’re a failure. Fewer positive tests? Success!! It is just genius. What is this person marketing? Well fear, of course. Cui bono there, I wonder?

Right now, the Euro is heading lower, and I think the selling pressure will remain in place until those restrictions are lifted – that’s probably 4 weeks away – unless counterbalanced by some excitement following the US national elections on November 3rd.

How many more “October Surprises” will we be able to handle in these last few weeks before the election?