Gold spiked lower in Asia, rallied through to the open in New York, but then retreated into the close. The short white/spinning top candle was a bearish continuation, forecaster dropped, moving deeper into its downtrend. Gold is in a downtrend in both the daily and weekly timeframes.

Gold/euros climbed +6.88 [+0.43%] to 1625.35 on moderately light volume. The short white candle was a bearish continuation, forecaster climbed, moving higher into its uptrend. Gold/euros is in an uptrend in the daily and weekly timeframes.

Not much happened today for gold. The number of contracts standing for delivery has abated. There was a bit of short covering, but it wasn’t significant. Gold’s near term direction is slightly bearish. 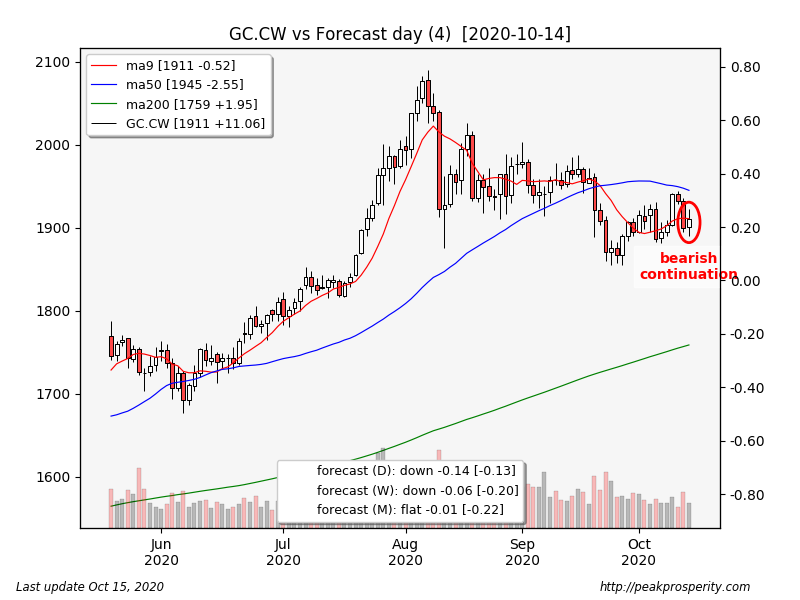 Silver looked a lot like gold – a dip in Asia, followed by a rally into early trading in New York that didn’t last. The short white candle was a bearish continuation, forecaster climbed, but remains in a downtrend. Silver is in an uptrend in the weekly and monthly timeframes.

Really not much happened today in silver. Direction for silver remains unclear. 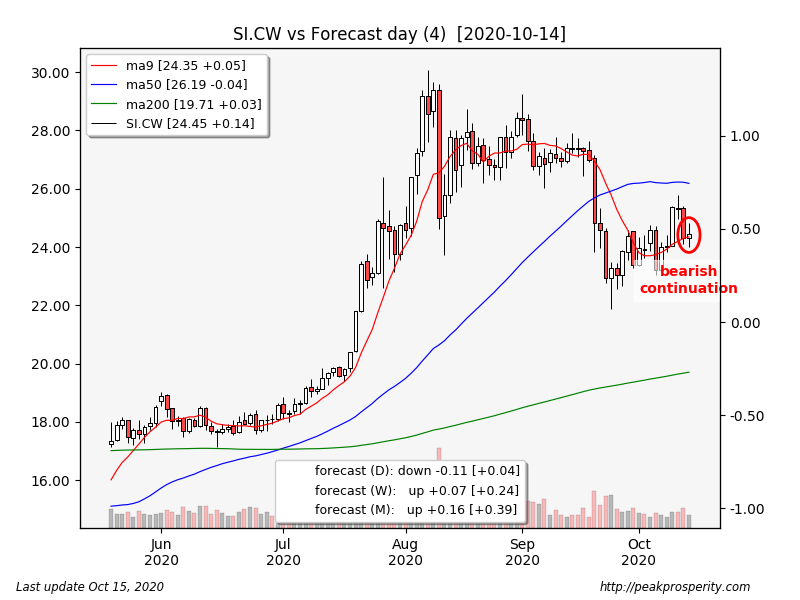 Miners gapped up at the open, then mostly chopped sideways for the rest of the day. GDX rallied +1.76% on moderate volume, and GDXJ moved up +2.06% on moderate volume. XAU climbed +1.32%, the doji candle was a bullish continuation, forecaster climbed, moving higher into its uptrend. XAU is in an uptrend in all three timeframes.

Miners made a new 3-week high today; this semi-shocking outcome came despite a much more bearish performance of most of the rest of the metals group over the past few weeks. Miners continue to look strong; forecaster is continuing to show a moderate uptrend for the mining shares. 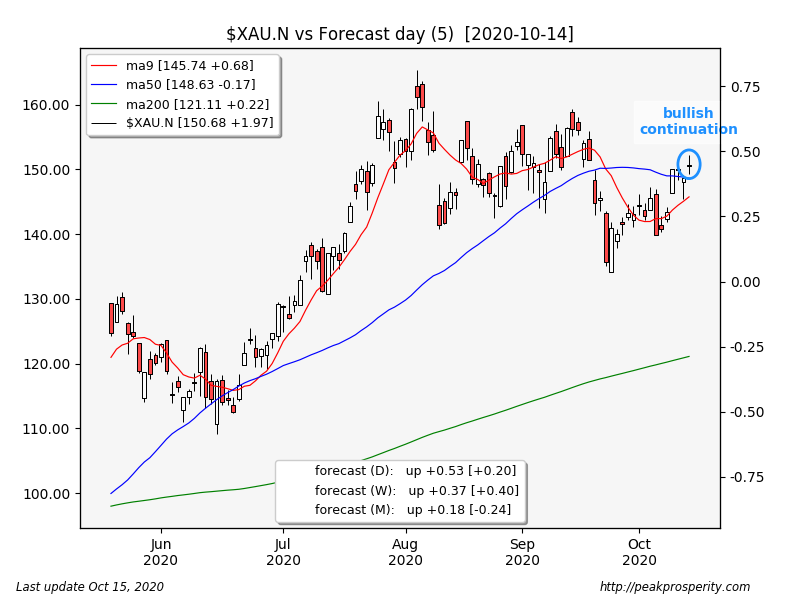 Copper climbed +0.02 [+0.66%] to 3.05 on moderately light volume. The confirmed bullish nr7 candle was neutral, forecaster climbed, moving higher into its uptrend. Copper is in an uptrend in the daily and weekly timeframes.

Copper remains in a near term uptrend, hovering not far from the recent 2-year high. 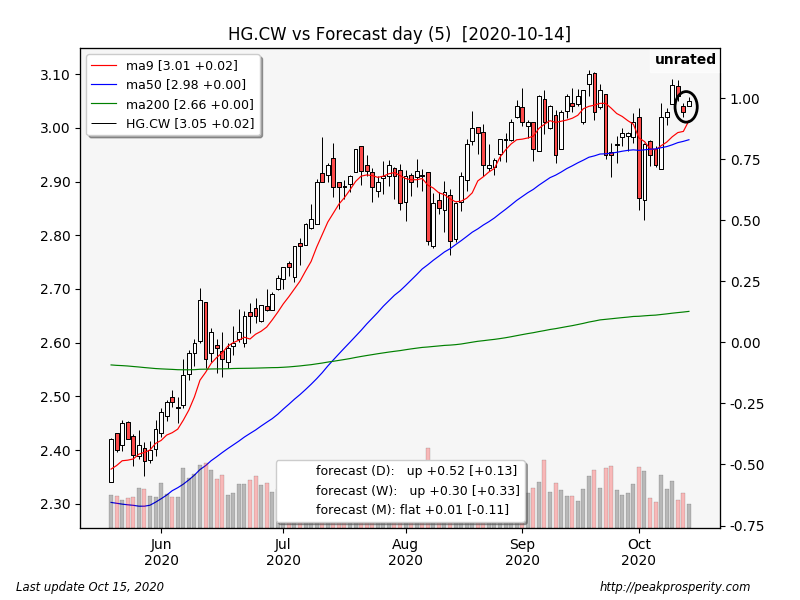 The buck dropped -0.17 [-0.18%] to 93.35 on moderate volume. The short black candle was a bullish continuation, forecaster fell, dropping into a downtrend. The buck is in a downtrend in both the daily and weekly timeframes.

Direction for the buck remains uncertain; at the moment, there is a slight downward bias. 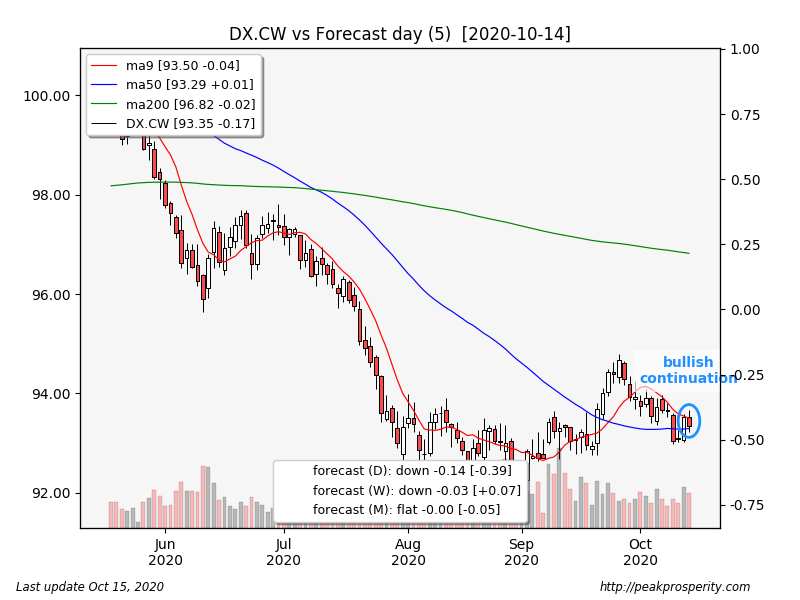 Crude shot up +0.94 [+2.33%] to 41.37 on moderate volume. The short white candle was a possible bearish reversal (35%), but forecaster climbed, rising into an uptrend. Crude is in an uptrend in the daily and weekly timeframes.

Crude is now back above all 3 moving averages – and in a slight uptrend. I’d normally say this is bullish, except every time I say this sort of thing, crude sells off. So this time I will keep quiet. 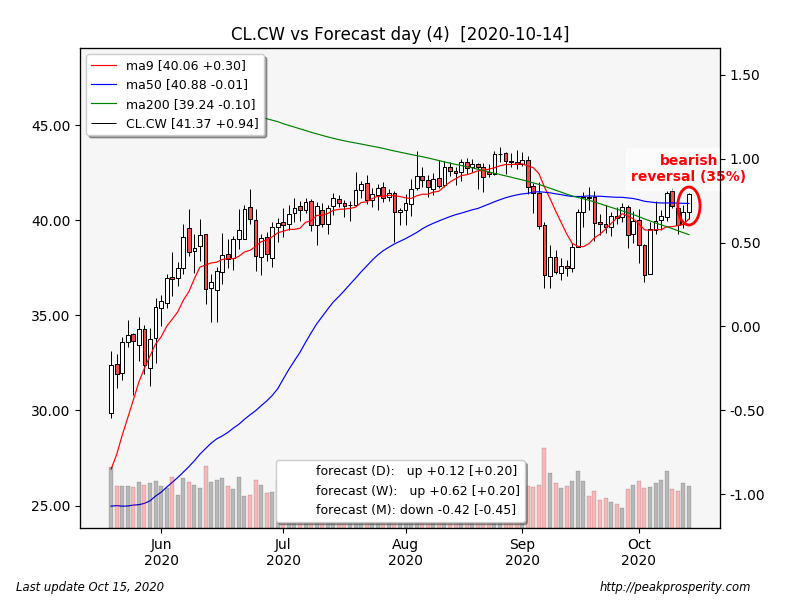 SPX dropped -23.26 [-0.66%] to 3488.67 on moderate volume. The short black candle was a bearish continuation, forecaster dropped, falling into a downtrend. SPX is in an uptrend in the weekly and monthly timeframes.

NYSE decline ratio was 61%, which doesn’t look all that bearish. However the failure to make a new all time high is a bearish sign, as is the 3-candle swing high. Forecaster is now in a slight downtrend. Even so, SPX remain s above the 9 MA; this is still just a modestly bearish signal. 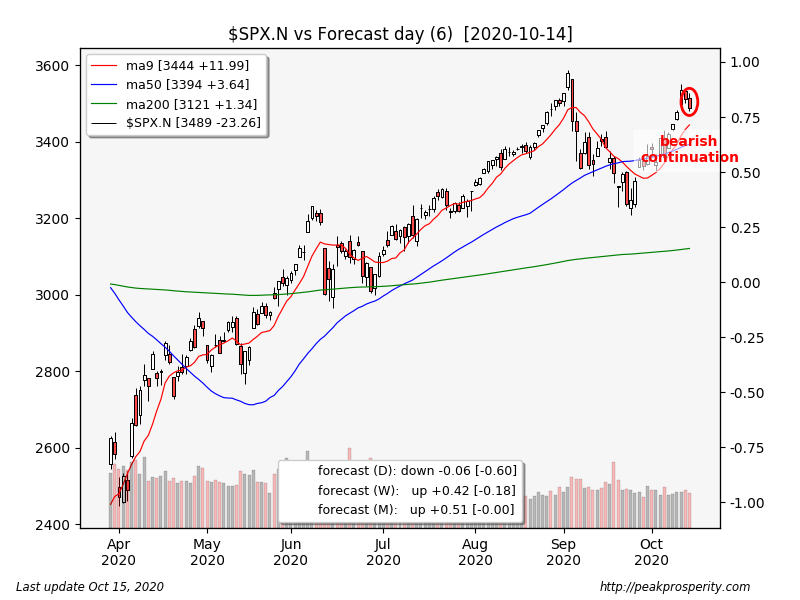 TLT climbed +0.23%. The short black candle was a bullish continuation, forecaster climbed, moving higher into its uptrend. TLT is in an uptrend in the daily timeframe. The 30-Year yield fell -1.0 bp to +1.51%.

TY inched up +0.01%. The northern doji candle was a bullish continuation, forecaster climbed, moving higher into its uptrend. TY is in a downtrend in both the weekly and monthly timeframes. The 10-Year yield fell -1.0 bp to +0.73%.

Not much happened in bonds today; overall, the trend for treasury bonds continues to point lower.

JNK dropped -0.23%. The short black candle was a bearish continuation, forecaster dropped, but remains in an uptrend. JNK is in an uptrend in the daily and weekly timeframes.

This is the second day of decline for crappy debt, and a 3-candle swing high, however it remains above all 3 moving averages, and is still in a mild uptrend. 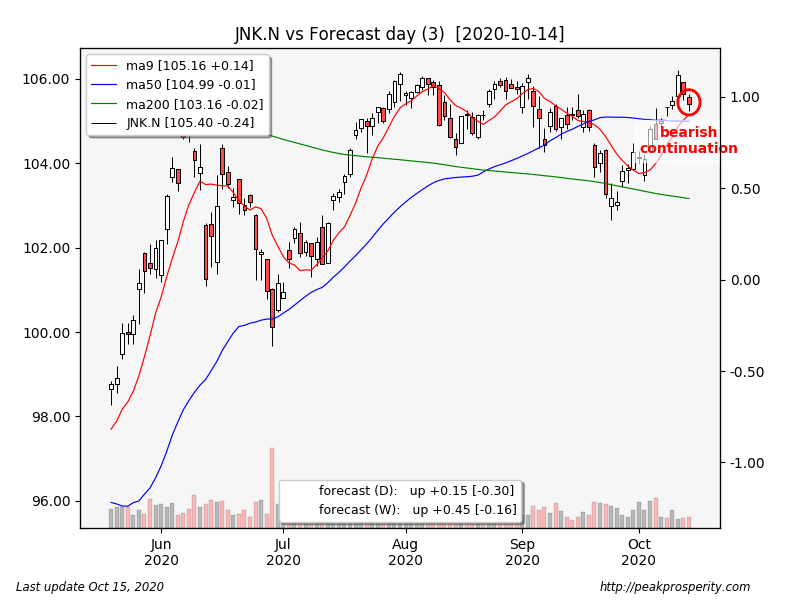 The GLD ETF tonnage on hand climbed +0.29 tons, with 1278 tons remaining in inventory.

Physical ETF discounts continue to widen – big bar premiums are falling. This is bearish for PM.

Gold, silver, and the miners all moved higher today, however the miners remain a standout performer, making a new 3-week high just today. That’s because over the past few weeks, declines have been modest in the mining shares – brisk drops in the metals have not led to strong selling in the miners, for some reason.

That would seem to be bullish for PM.

On the other hand, I don’t like the look of those large discounts in the physical ETFs, nor the small premiums at retail.

Risk assets were mixed once more; SPX and crappy debt both sold off, with SPX looking a bit weaker. Crude and copper both rallied. Some of the bearish moves in equities were attributed to the stopping of some vaccine trials due to illnesses in trial participants.

The buck sold off; currency still appears to be a strong influence on the price of the metals. I suspect that a strong rally in the buck will lead to more selling in PM.

Still no progress on stimulus talks. Nancy is holding out for her number.

Meanwhile, I took a look at the EUR/USD chart and noticed it seemed to be putting in a lower high. What’s going on across the pond?

A massive second wave of infections – but not so many new deaths.  But the governments are freaking out. Whoever constructed the realtime tracking of corona virus cases was a motivational genius.

* UK: restrictions conditional based on infection rates:
“medium”: pubs & restaurants close at 10pm [the rest of England]
“high”: residents not allowed to mix with other households unless outside [most of Northern England]
“very high”: pubs, bars, gyms, casinos are closed [Liverpool]
Shops, schools and universities will remain open.
* Germany: all shops closed after 11pm.
* France: curfew from 9 pm – 6 am, for the next 6 weeks in major cities.
* Italy: restrictions on gatherings, restaurants, sports & school activities.
* Spain: bars & restaurants closed in Catalonia for the next 2 weeks.
* Netherlands: partial lockdown; bars, cafes, and restaurants to close
* Ireland: closed “non-essential” retail outlets, gyms, pools, and leisure centers.
* Northern Ireland: closing pubs & restaurants for 4 weeks
* Sweden: No restrictions.

Remember all those EU GDP “projections” for 2020? The ones that purported to show that Sweden really didn’t do any better than the rest of Europe? You can toss them right out the window. The “second wave”, and more importantly, the shutdowns in reaction to it, will result in a drop for Q4 GDP. Except in Sweden, of course.  We won’t see the numbers for another 4 months, but that’s my prediction.

As I was going through articles trying to sort out what the restrictions were in various countries, I was once again struck by the admiration that CNN had for the CCP’s response to the virus:

China shows what’s possible when lockdowns are combined with population tracking policies intended to contain the virus. The world’s second-largest economy locked down hard earlier this year, and the government has spent hundreds of billions of dollars on stimulus efforts. It was the only major world power to avoid a recession this year.
https://edition.cnn.com/2020/10/15/business/lockdown-economy-johnson-uk-intl/index.html

Forgetting for a moment that you are a fool if you trust the CCP’s claims that they “avoided a recession”, the envy that CNN clearly feels for the purported effectiveness of the CCP response – perhaps – gives us a peek for what sorts of policies we can expect if the CNN candidate for President ends up winning in November.

It is really unfortunate that lockdowns (and the price paid with “lockdown deaths” – mostly by the poor) do not actually eliminate the virus. All they do is push infections off into the future. What is happening in Europe right now is solid evidence of this. Lock down again – infections pushed off once more.

Except of course in Sweden.

Currently, the weekly chart for the Euro looks reasonably bearish, while the monthly appears to be at a turning point. Will the bearish economic impact (again, mostly on the poor) of the EU’s collective restrictions outweigh the “uncertainty” of this US election season? That is the question.

I’ll be watching EUR/USD to see if it is providing any clues as to what the outcome might be.

First Sweden.  0.00 deaths, even though there is a modest “third wave” of new positive tests showing up now. 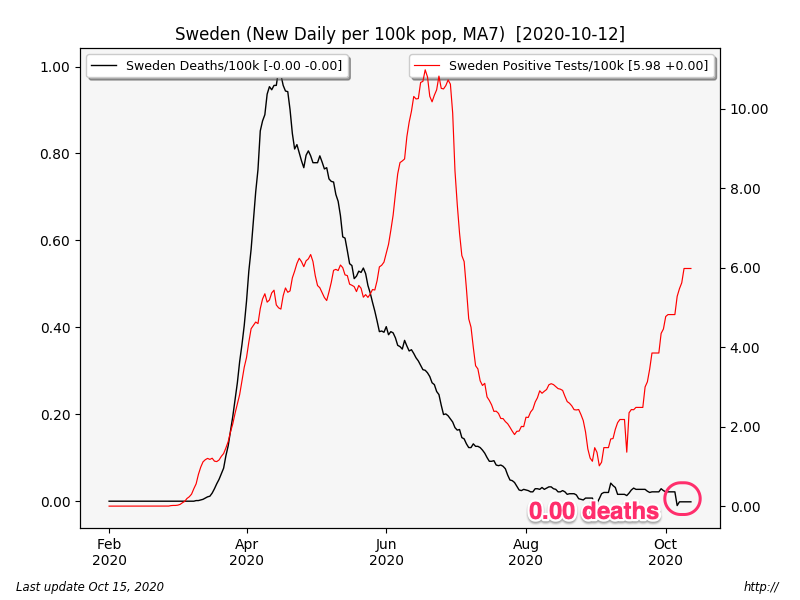 And now France.  A massive “second wave” of new positive test results.  These are the infections that would have happened back in April, but were pushed forward by the lockdown.  Not very many deaths though.  Is a lockdown (and/or “business restrictions”) really required? 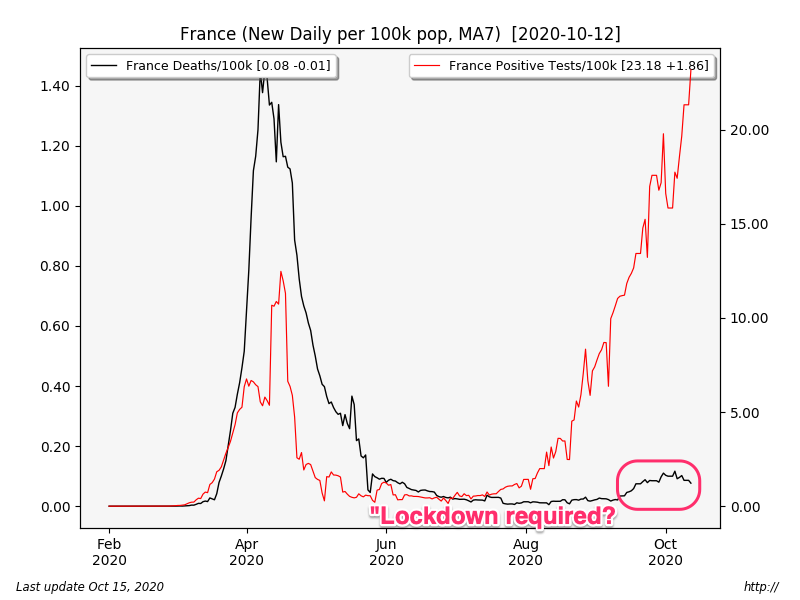 When the Rig Count rises at least 10% from its low after falling more than 50% from a multi-year peak, it has been a good long-term sign for the energy sector.

Rig counts tend to be a slow-moving series since these firms can’t simply turn wells on and off with a switch. When they started adding capacity after a plunge, then companies in the S&P Energy Sector index had a strong tendency to rally over the next 9-24 months. The risk/reward and probability of a large gain/loss was most impressive over the next 2 years.

The same was true for oil and gas companies. They tend to swing more in boom/bust cycles than the broader energy sector, and so the returns were more extreme. 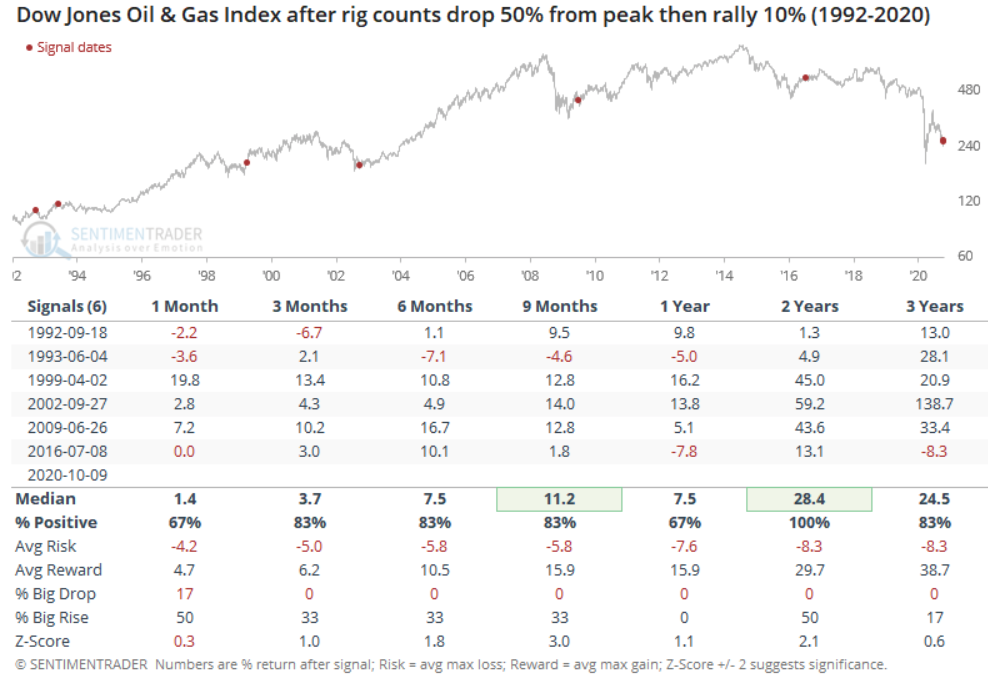 It looks like XLE and XOP should be good investments in 2021-22.

Yeah that’s some pretty good confirmation to what Art Berman was already suggesting.

The problem is to avoid buying the companies that will go BK prior to the big move higher.  🙂

Hmm.  If we loop this in with the pandemic timing of the EU “second wave” – which should theoretically be over with in another 2 months – economic recovery might be expected perhaps a few months after that.

Let’s pretend that for some reason or another that more fiscal stimulus doesn’t happen in the next year or so. What do we invest in and what do we not invest in?

…and now the CCP is targeting Australian Cotton.

If, say, the CCP decides to buy its cotton from another – more expensive – country, then the buyers from that country would have to shift their purchases to AU cotton.

It all seems pretty silly.  Sign of the Times, I suppose.

In the article provided, I did see an interesting stat: AU’s trade surplus with China is 96 billion dollars.  [Did I get that right?]

Yup – our big supply to China is Iron Ore (which they will find hard to swap out due to the vol required), then Coal (Coking and Thermal).  The rumours have it that CCP have a hit list of items to progressively work through.  I agree that supply will just move around for many items, though some items like Wine would suffer as their idea is to just raise the costs and drive down demand.

Heh well I think the whole wine boycott will end up being a big backfire for the CCP.

AU provides a big supply of decent quality reasonably-priced wines – probably the largest in the pacific region – at volumes interesting enough for the Chinese market.  Brands are all well known at this point.  They will replace these with…exactly what?  Chile?  Coal you can swap out and nobody cares.  Wine?  Not the same at all.

This act will deprive the lower level CCP elites their wine fix.  I’m guessing that Xi will see his support decline as a result among the rank & file – with the gains seen by Li Keqiang, who appears to favor a less Wolf Warrior approach.

Oh.  Maybe they really are trying to drive down external demand, like you say.  To prepare for a more turbulent future.  Where their massive trade surplus evaporates due to no more tech exports – no more parts from the west.