Market-moving news: China said that there needs to be more talks to hammer out the details of this “phase one” deal before Xi will sign. Key issues: China wants Trump to drop a tariff hike in December, in addition to the tariff hike Trump has already dropped which was scheduled for this coming Tuesday.

Gold popped higher briefly after the US-China trade news, then moved lower into the close. The short white candle was unrated, and forecaster jumped higher, but remains in a downtrend. Today’s rally was enough to pull weekly forecaster back into an uptrend, leaving gold in an uptrend in both weekly and monthly timeframes. 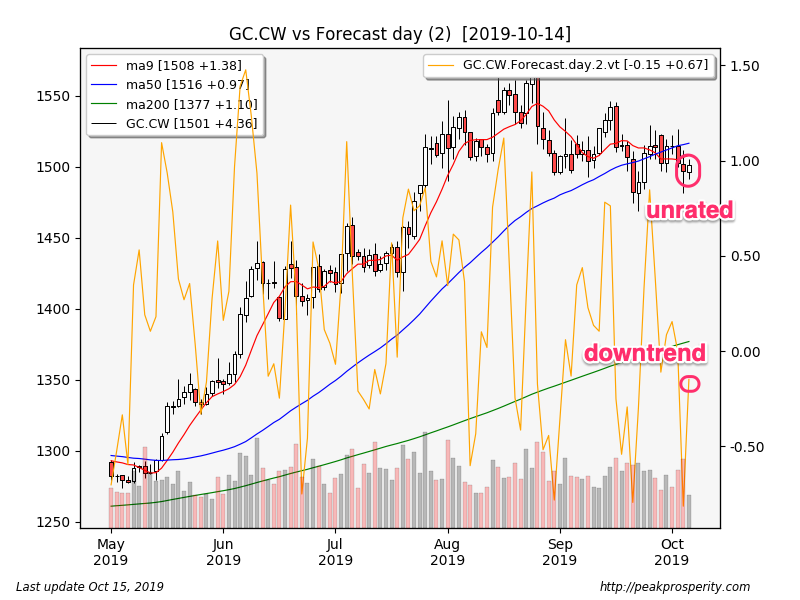 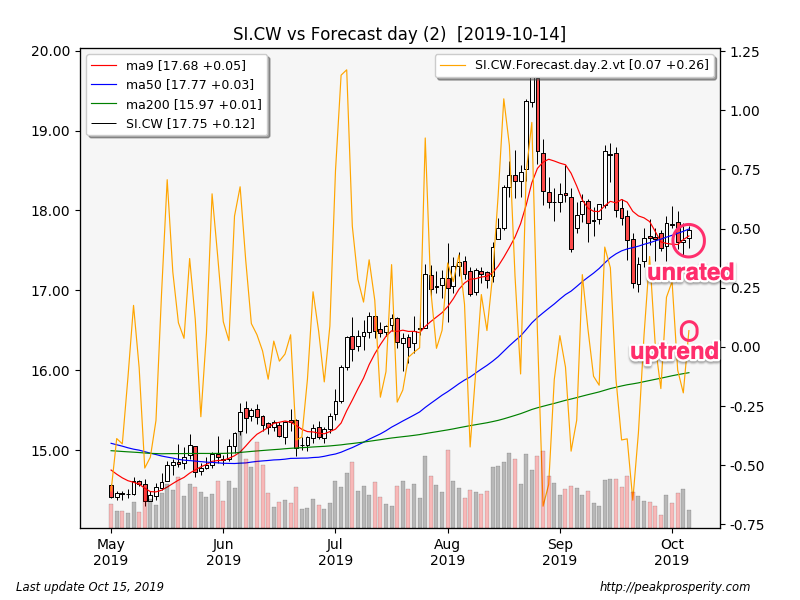 Miners more or less chopped sideways today; GDX rose +0.37% on moderately light volume, and GDXJ dropped -0.08% on very light volume. XAU moved up +0.42%, the bullish harami was somewhat bullish (36%), and forecaster inched higher, but remains in a strong downtrend. XAU remains in a downtrend in both daily and weekly timeframes. 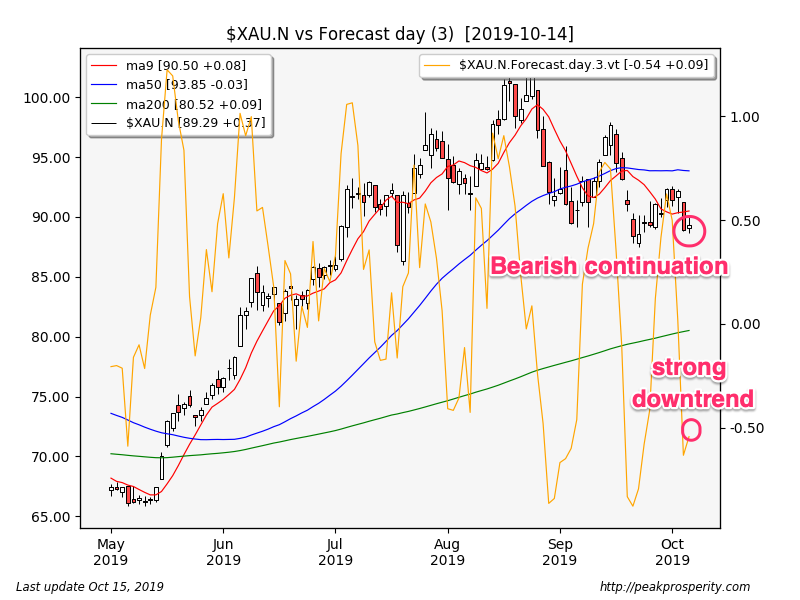 Platinum fell -0.34%, palladium rose +0.50%, and copper moved up +0.23%. Copper actually sold off pretty hard on the US-China trade news, but then bounced back strongly, regaining all its losses and then some. Palladium made a new all time high.

The buck rose +0.16 [+0.16%] to 98.03. The bullish harami pattern was actually a bearish continuation, and forecaster fell further into its downtrend. The buck is now in a downtrend in all 3 timeframes.

The UK and EU are finally negotiating for real; why do something up front when you can leave it until the very last minute – that way you can complain that there’s just not enough time left to do a proper job. This reminds me of when I was an undergrad, and had a 15 page paper to write for my classes in US History.

Crude plunged -1.41 [-2.57%] to 53.53. Crude more or less fell the whole day, bouncing slightly at the close. The bearish engulfing pattern was bearish (47%) and forecaster dropped, but managed to remain in an uptrend. Crude remains in a downtrend in both weekly and monthly timeframes.

SPX fell -4.12 [-0.14%] to 2966.15. The doji candle was unrated, and forecaster inched higher, and remains in an uptrend. SPX remains in an uptrend in the daily and monthly timeframes. So far, the market is managing to contain its excitement over the US-China trade deal.

Really not much happened today, except for the crude market, which may have put in a reversal on the daily chart. Nick Cunningham thinks that’s because of the market’s disappointment over Trump’s initial trade deal hype on Friday that didn’t stand up to weekend scrutiny.

Except for crude, things were pretty quiet today.

Dave I asked Adam or Chris about this in another and never saw a response.  What exactly is the “Overnight” part of the Repo market?  Is it an overnight loan meaning in the morning they the “loan” is paid back?  Because if thats the case why would that expand anyones balance sheet beyond the next morning? Everyones balance sheet remain about unchanged minus the interest rate.

I can’t imagine “overnight” refers to bankers working hours.  Like there’s a Wall Street banker pulling 3rd shift hours at the desk trading at 3am.  Can you shed any light on the term?  Thanks.

Yeah an overnight repo is a 24 hour loan.  I think organizations have a requirement to have reserves of a certain size, and some of them fulfill this requirement by acquiring customer deposits.  Others do this with longer term borrowing.  And some do it with repos.

Lehman Brothers Holdings Inc., before it failed, financed about a third of its assets with $200 billion in overnight repurchase agreements handled by clearing banks, and depended on 10 short-term lenders for 80 percent of its repos, according to a report that includes a list provided to the Federal Reserve Bank of New York in September 2008.

So Lehman was doing exactly that: borrowing 200 billion in the repo market, possibly because nobody would lend them money longer term.  And finally the lending banks got worried and cut them off, and then – down went Lehman.

It just means there aren’t enough dollars out there.

Dollar turning to confetti?  Not so much.  Looks more like a dollar shortage.  Lots of people around the world have borrowed in dollars because rates were cheaper than in their native currency.  When the economy turns down, money flees to the buck, the buck rallies, and all those dollar loans get more expensive to repay.