Market-moving news: happy noises from a UK-Ireland meeting suggest a Brexit deal may be possible after all, government inflation softened [CPI: headline +0.0% m/m, less-food-and-energy: +0.1% m/m], and Trump put a positive spin on trade negotiations and said he will meet with Liu He tomorrow. Tea-leaf-readers suggest a mini-deal is possible. China appears to be trying to forestall the big tariff increase scheduled for October 15th, and Trump may be willing to settle for an interim “half a loaf” deal see what happens going forward.

Gold fell following the CPI release at 8:30 am, and dropped once more at the open in New York. The long black candle was bearish (44%), and forecaster dropped back into a downtrend. Gold is now back in a downtrend in the daily and weekly timeframes.

Futures are projecting an 81% chance of a rate cut in October, an 89% chance of one rate cut in December, and a 36% chance of two rate cuts. Looks like prospect of a trade agreement outweighs the low government-measured inflation reading. 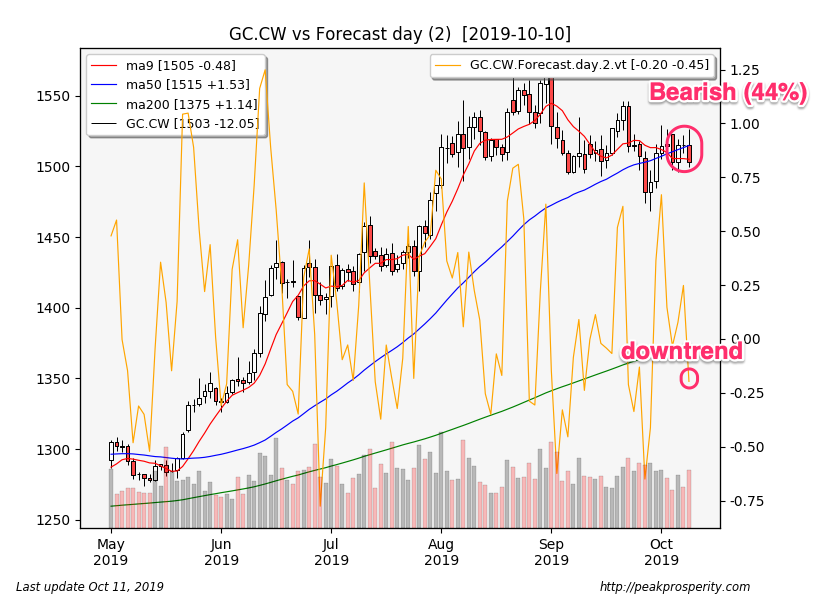 Silver fell along with gold – once at 8:30 am, and once more at 9:30 am. The swing high/bearish engulfing pattern was quite bearish (59%), and forecaster dropped back into a downtrend. Today’s drop also pulled the weekly back into a downtrend, leaving silver in a downtrend in both daily and weekly timeframes. 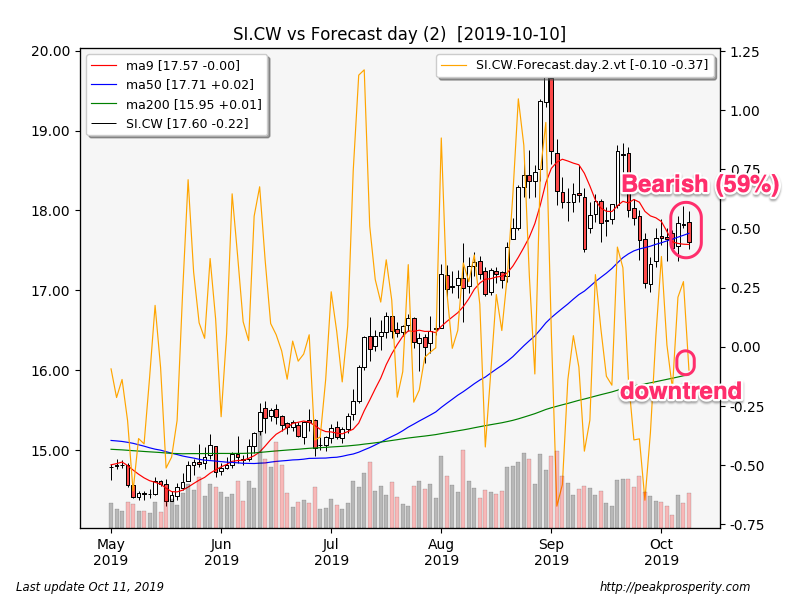 Miners plunged at the open, but bounced back an hour later and ended up closing at the highs. Was unchanged on moderately light volume, while GDXJ rallied +0.60% light volume. XAU rose +0.73%, the hammer candle was bullish (45%), but forecaster fell, just barely avoiding a reversal. The rally was enough to pull weekly forecaster into an uptrend, so XAU is now in an uptrend in all 3 timeframes.

The GDX:gold ratio rose +0.80%, and the GDXJ:GDX ratio climbed +0.60%. That’s bullish. The move in the miners was quite surprising today; gold was off hard, and yet here are the miners (and especially the juniors) rallying back from a deficit. 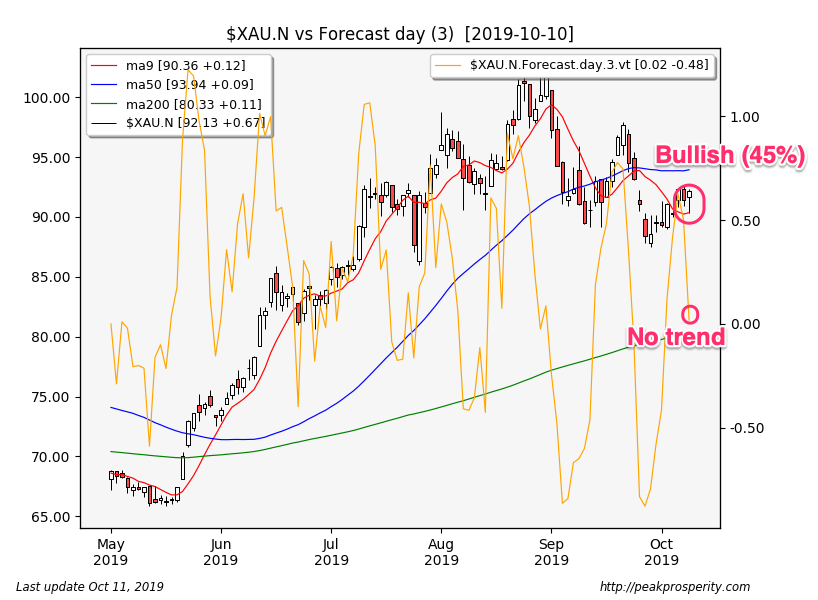 Platinum rose +0.76%, palladium climbed +1.03%, and copper jumped +1.68%. A good day in the other metals – the platinum rally suggests to me that the drop in gold and silver might be overdone.

The buck plunged -0.41 [-0.42%] to 98.28. The confirmed bearish NR7 was definitely bearish (48%) and forecaster fell, but not quite enough to move into a downtrend. The buck remains in an uptrend in both daily and weekly timeframes. Gold should have done a lot better than it did, what with the buck tanking like this.  That’s not a great sign.

GBP rallied hard today after a meeting between Ireland’s PM Varadkar and PM Johnson of the UK produced happy comments by the Irish PM after the meeting ended. But when asked who gave up what, his reply was noncommittal:

“I don’t think this should be seen in the context of who’s making concessions, or who the winners and losers are, I don’t think that’s the game any of us want to play.”

Sure, nobody wants to play that game. So who caved on what? Johnson, probably. Why else would Varadkar suddenly sound all bubbly? We will eventually find out, but for now, a last-minute Brexit agreement looks possible.

Crude spiked lower at the open in Asia, bounced back, and then rose during rest of the day, closing at the highs. Crude ended the day up +1.21 [+2.30%] to 53.81. The closing white marubozu was bullish (51%), and forecaster jumped higher into what is now a reasonably strong uptrend. Crude remains in a downtrend in both weekly and monthly timeframes. While the daily now looks positive, with crude crossing the 9 MA just today, the longer term trends remain bearish. If a trade deal gets done, however, I’d expect that to change.

SPX climbed +18.73 [+0.64%] to 2938.13. The opening white marubozu was a bullish continuation, and forecaster inched higher into a very slight uptrend. Today’s rally also caused monthly forecaster to move back into an uptrend – as a result, SPX is now in an uptrend in both daily and monthly timeframes. That said, the trends are both very weak.

Hmm. Might a US-China trade deal be a sell-the-news event, if/when it actually happens? Its a thought.

JNK climbed +0.25%, the long white candle was a bullish continuation, and forecaster moved higher into what is now a modest uptrend. BAA.AAA differential rose +4 bp to +93 bp. Credit concern remains modest at best.

So gold and silver sold off, but the miners managed to avoid the downdraft. Bonds plunged also, while copper, crude, and SPX rallied. This is the usual outcome from positive US-China trade news.

And yet – rate cut odds didn’t drop that much. And that SPX rally looks a bit anemic, as does the junky debt bounce. Whatever comes out of the current talks may end up being a sell-the-news event, as I suggested earlier, because it doesn’t look as though China is willing to stop the forced IP transfer, among other things.

Will we know by end of day Friday? We just might.