Gold chopped sideways in Asia, moved lower in London, and as the US equity market sold off, slowly moved higher, closing right near the highs for the day. The long white candle was neutral, but forecaster moved up +0.11 to +0.01, which is (just barely) a buy signal for gold. Gold remains in a downtrend on the weekly and monthly timeframes.

COMEX GC open interest fell -6,335 contracts. It looks as though there was a fair amount of short-covering today. That’s probably what caused the rally.

Rate rise chances (December 2018) fell to 75%. Amusingly, Trump blasted the Fed today, saying they had “gone crazy” with interest rate increases. His strategy is clear: blame any negative market moves on Fed actions, while taking credit for any market rallies. 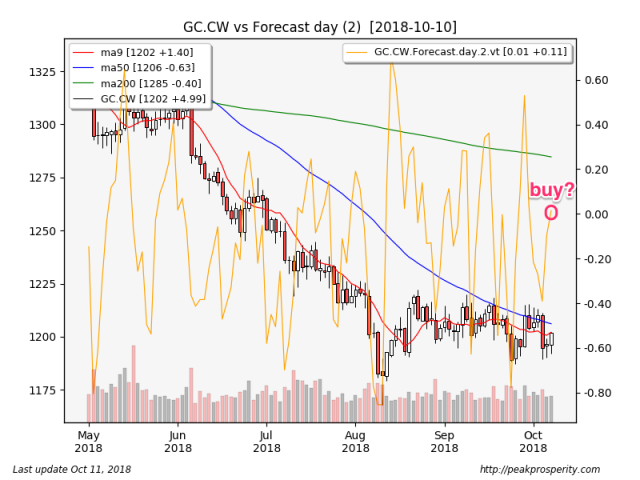 Silver moved lower for most of the day, bottoming out at 10:30 am at 14.25, and then moving slightly higher into the close. The long black candle was a bearish continuation, but the forecaster rose +0.19 to -0.04; it appears that the downtrend is slowing. Silver is in a downtrend in all 3 timeframes.

The gold/silver ratio climbed +0.87 to 83.62. That’s bearish; the current level for the ratio suggests PM could be at or near a long term low. 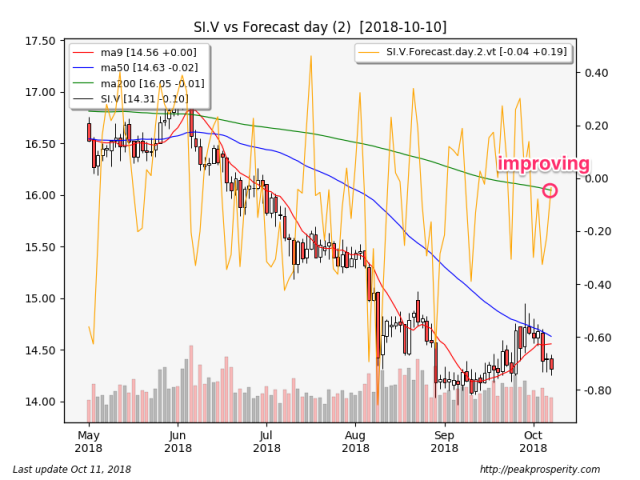 Miners rallied today – the only equity market sector I saw that did so. GDX climbed +1.31% on very heavy volume, while GDXJ rose +0.80% on moderate volume. XAU climbed +0.97%, with the spinning top candle having a neutral rating. XAU issued a buy signal on today’s rally, with forecaster moving up +0.59 to +0.20. XAU is in an uptrend in both the daily and monthly timeframes.  The daily chart doesn’t look all that great to me – but maybe the model is seeing movements in other sectors that it finds bullish.  It knows about the sell-off in SPX, for example. 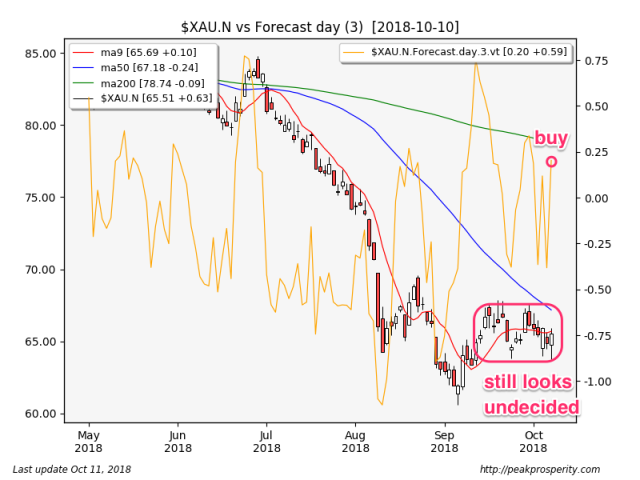 Platinum fell -0.10%, palladium dropped -0.33%, while copper plunged -2.15%. Copper’s drop strongly suggests risk off, while the other two metals aren’t quite so sure.

The buck fell -0.18 [-0.19%] to 95.05. The move finally caused DX forecaster to issue a sell signal, with the forecaster falling -0.28 to -0.12. The buck is now below its 9 MA as well. Buck is now in a downtrend in the daily and weekly timeframes. The Euro moved up +0.31%, in spite of the troubles with Italy, and contagion threats from Turkey. My sense is that the US is losing some of its image as safe haven because of the increasing level of heat in US politics. In addition, it may also be that China’s ability to infect US server infrastructure is starting to be seen as a serious weakness. 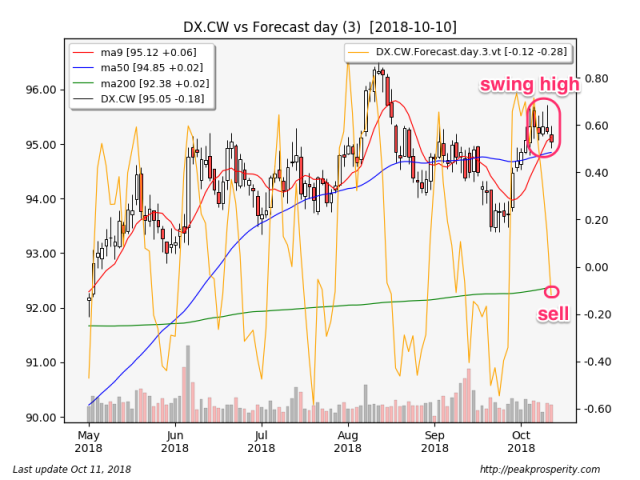 Crude fell -2.05 [-2.75%] to 72.44. Intraday, the selling in oil more or less tracked the plunge in equity prices, which suggests that crude’s drop was a form of risk off move. The API report was quite bearish (crude: +9.8m, gasoline: +3.4m, distillates: -3.5m), which caused a 20 cent drop at end of day. Crude’s plunge moved crude back below the 9 MA. However, crude remains in an uptrend in both the weekly and monthly timeframes. Part of the selling pressure on crude today was weather-related: cat-4 hurricane Michael managed to miss all the oil-producing platforms in the Gulf of Mexico: good news for platforms, but bad news for price.

SPX plunged -94.66 [-3.29%] to 2785.68. Prices had moved 10 points lower in the futures markets overnight, but once the market opened the real selling started, and except for a few hours around lunchtime, the selling didn’t stop until the close. There were all sorts of candle prints to look at; most important was a monthly swing high, which had an 82% chance of marking the top. That holds only if we close here at end of month – and we have another 20 days until then.  Monthly forecaster still hasn’t issued a sell signal yet, but so far, it looks fairly ugly.  SPX is in a downtrend in both the daily and weekly timeframes. 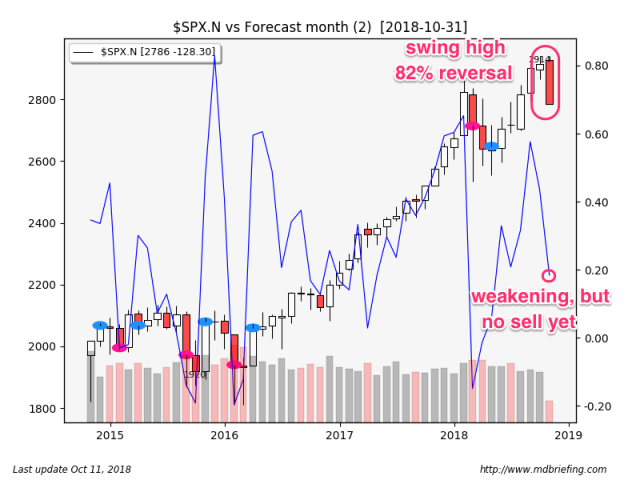 Sector map shows tech led lower (XLK:-4.85%) along with most other sectors down at least 3%, while utilities did best (XLU:-0.55). Nothing was spared today. This was a bearish sector map.

VIX screamed up +7.01 to 22.96. Wow. I wonder how those “short volatility” strategies are working. (Hint: poorly. They are working poorly.)

TLT fell -0.27%, a fairly shocking outcome given just how badly US equity prices plunged. TLT forecaster remains in a relatively strong uptrend, but if the 30-year can’t get a significant bid during a large and surprising equity market decline, that suggests the sentiment for US treasury bonds is pretty bad.  Someone, somewhere is selling.  Perhaps its China.  TY looked better, rising +0.31%, with the forecaster up +0.31 to +0.05, which is a buy signal for TY. TY managed to close above its 9 MA, which is a positive sign. TY weekly and monthly both remain in downtrends. The 10-year yield rose +1.7 bp to 3.23%. 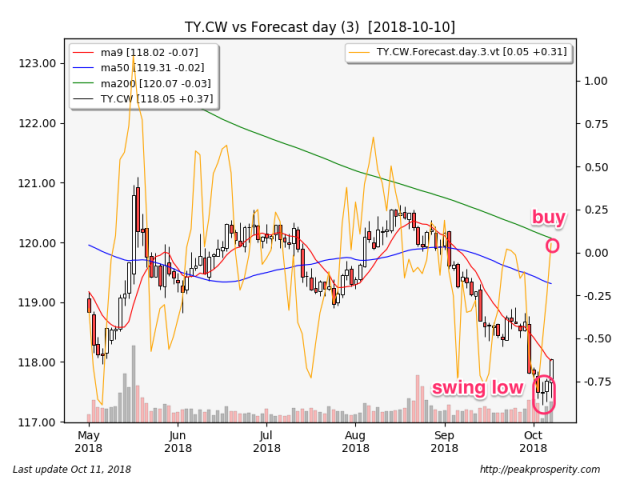 JNK cratered along with equities, dropping -0.79%, making a new low, closing at the lows, and generally looking really horrid. Watching prices intraday, it was clear that money was fleeing junk debt – JNK just sold off all day long, with no real bounces. It looks like that coalmine canary was a good tell for risk assets – JNK sold off for 4 days preceding today’s big drop. 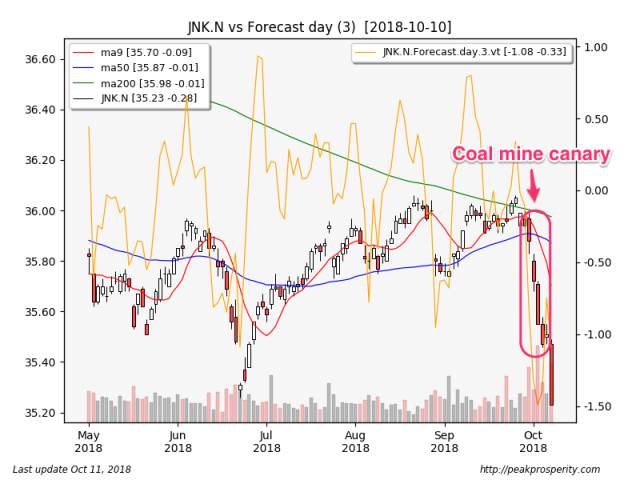 So what was today’s big move all about?

My primary evidence is the SPX sector map. Tech led the market lower. While that’s expected in a downtrend, we still have to ask – what caused tech to suddenly sell off over the past week?  Was it about cost-push inflation from that paint company a few days back?  I don’t think so.

I think the selling pressure came from concerns about just how widespread the Chinese hardware infections are in US server farms. A new article from Bloomberg – released at 10 am – has evidence from a security expert working for an unnamed US telecom company of more hacked Super Micro hardware. Unlike the incessant stream of poorly-sourced partisan “bombshells” we hear from the media, this wasn’t an anonymous source – the expert was named, and provided documents, analysis and other evidence of the discovery.  Also – watch the reporter in this piece.  He looks incredibly certain about his story. He is running a victory lap.  That’s the vibe I get anyway.

Just how bad is this problem? We just don’t know. The US companies are denying everything. That just makes matters worse, because they are almost certainly not telling the truth.  This leaves the size of the problem up to the imagination.  “When things get difficult, you have to lie.”  It could be really, really bad!

The executive said he has seen similar manipulations of different vendors’ computer hardware made by contractors in China, not just products from Supermicro. “Supermicro is a victim — so is everyone else,” he said. Appleboum said his concern is that there are countless points in the supply chain in China where manipulations can be introduced, and deducing them can in many cases be impossible. “That’s the problem with the Chinese supply chain,” he said.

The problem is unbounded.  And it is not limited to Super Micro.  Another security contractor:

“For China, these efforts are all-encompassing,” said Tony Lawrence, CEO of VOR Technology, a Columbia, Maryland-based contractor to the intelligence community. “There is no way for us to identify the gravity or the size of these exploits — we don’t know until we find some. It could be all over the place — it could be anything coming out of China. The unknown is what gets you and that’s where we are now. We don’t know the level of exploits within our own systems.”

So if you are a trader, and you read this, what do you do?

Every cloud does have a silver lining, however.  Cybersecurity consultants are going to make a fortune. No doubt that’s why they are bravely stepping forward to provide details for Bloomberg reporters.  Always remember “cui bono.”

Ok, take a step back.  Are US server farms (i.e. “the cloud”) the only potentially-infected set of computing devices?  Or is this a wider problem?  What if all iPhones have hardware mods placed in them by the PLA in that complicated Chinese supply chain?  These hardware infections were only spotted when they tried to “phone home” back to China.  Let’s imagine a hardware infection that didn’t phone home.  How would you even know it is there?

You wouldn’t.  Not without a physical examination.  Good luck with that.

And do you think Apple would tell you, even if they managed to find it?

Yes, Apple would definitely recall a billion iPhones – and bankrupt the company.

Whoever came up with the idea of designing products in the US, and having them built and assembled by our superpower adversary was a genius.  What could possibly go wrong?

How long will this negative sentiment last?  If I’m right about Chinese hardware infections being a primary cause of the SPX sell-off, it will depend on how many more hardware infection discoveries there are, what companies end up doing about it, and how widespread the problem is.  Right now, that’s unknowable.  We’ll have to see how things unfold.

I do predict that, in the medium term, US computer products will no longer be assembled in China.  I expect that Silicon Valley is in the process of fleeing China even as they deny that the problem exists.  Wait six months, and the primary cloud vendors will be announcing that their server farms are “China-Free”…