Gld moved steadily higher for most of the day, retreating somewhat into the close. The confirmed bullish nr7 candle was a probable bullish reversal (54%), forecaster climbed, rising into an uptrend. Gold is in an uptrend in the daily and monthly timeframes.

Gold/euros rallied +15.21 [+0.94%] to 1631.02 on moderate volume. The confirmed bullish nr7 candle was a probable bullish reversal (54%), forecaster climbed, moving higher into its uptrend. Gold/euros is in an uptrend in the daily and weekly timeframes.

Gold looked good today; the rally wasn’t driven by currency, which I think is a positive sign. Gold ended the day above the 9 MA, and in a short-term uptrend. 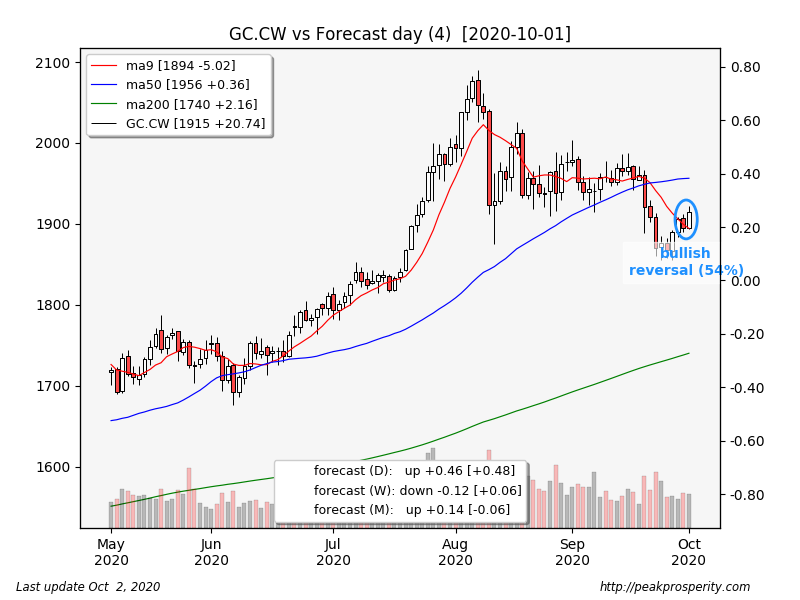 Like gold, silver moved higher for much of the day, but then fell into the close. The bullish harami candle was a bearish continuation, but forecaster climbed, rising into an uptrend. Silver is in an uptrend in the daily and monthly timeframes. 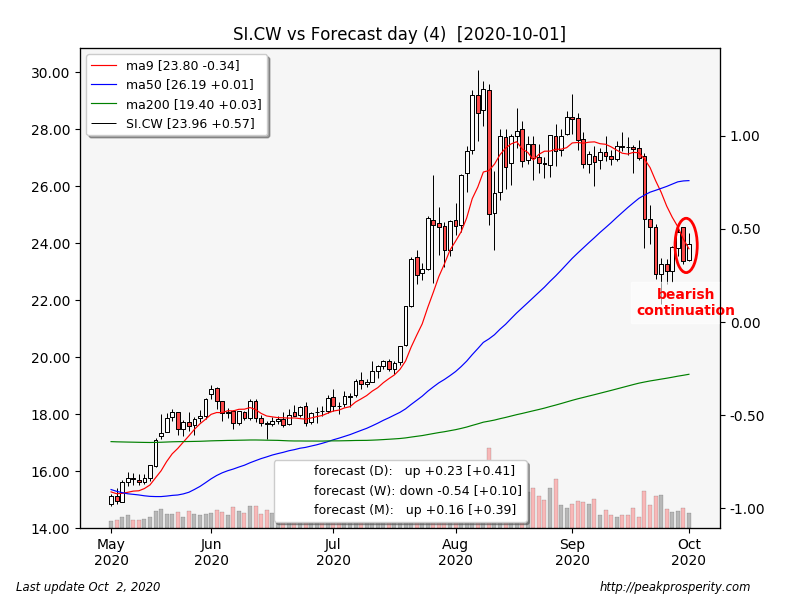 Miners gapped up at the open, and chopped sideways all day long. GDX moved up +1.05% on moderate volume, and GDXJ shot up +1.72% on moderately light volume. XAU rallied +1.03%, the doji candle was a bullish continuation, forecaster dropped, falling into a state of no-trend. XAU is still in an uptrend in the weekly and monthly timeframes.

Miners underperformed both gold and silver today; they continue to chug higher, and are now comfortably above the 9 MA. Yesterday the miners outperformed, today they underperformed. I’m not quite sure what that means! 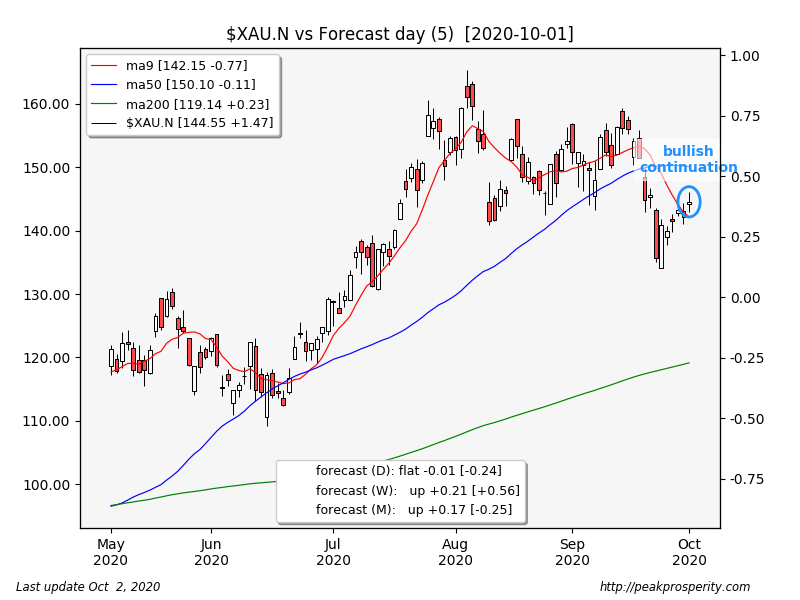 Platinum rose +7.85 [+0.86%], while palladium rose +9.16 [+0.39%]. Platinum continues to recover from last week’s pounding, although the strength of the uptrend is fading a bit now. Palladium also is in an uptrend, but it is looking a bit tired also.

Copper plunged -0.14 [-4.65%] to 2.87 on heavy volume. The bearish engulfing candle was a probable bearish reversal (50%), forecaster dropped, moving deeper into its downtrend. Copper is in a downtrend in all three timeframes.

Copper was just crushed today – it was a very bearish (engulfing) candle print – and the drop took copper back through both the 9 and 50 MA lines. Ouch. Glad I sold my copper miner a while back. This marks a 2-month low for copper. 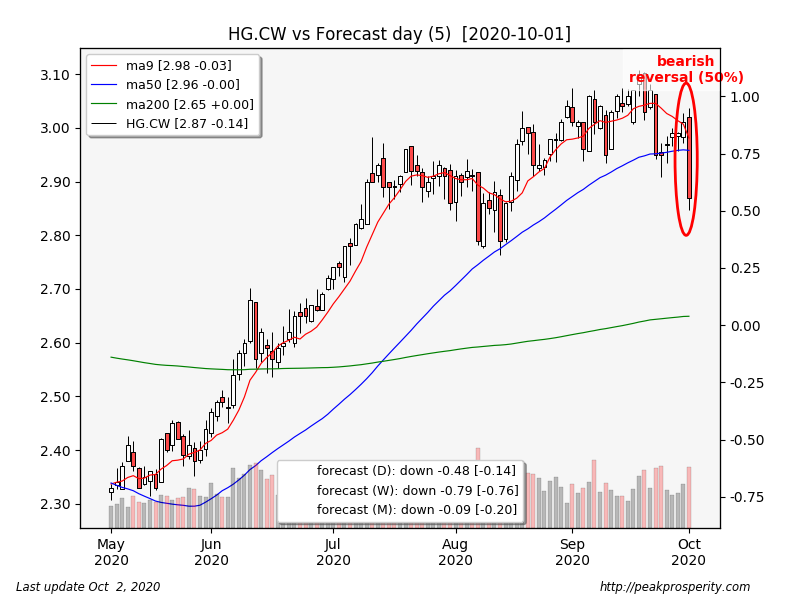 The buck fell -0.17 [-0.18%] to 93.75 on moderate volume. The spinning top candle was a bearish continuation, forecaster dropped, moving deeper into its downtrend. The buck is in an uptrend in the weekly timeframe. 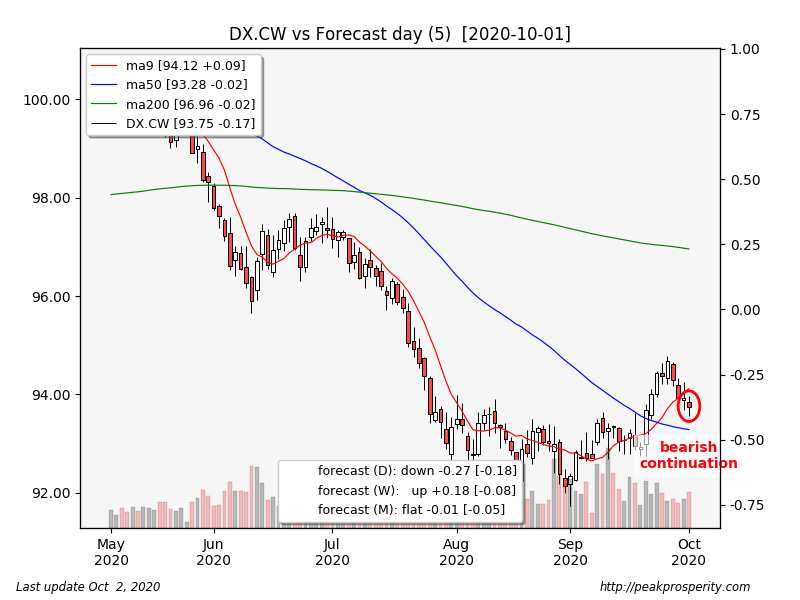 Crude plunged -1.25 [-3.13%] to 38.71 on moderately heavy volume. The long black candle was neutral, forecaster dropped, moving deeper into its downtrend. Crude is in a downtrend in all three timeframes. 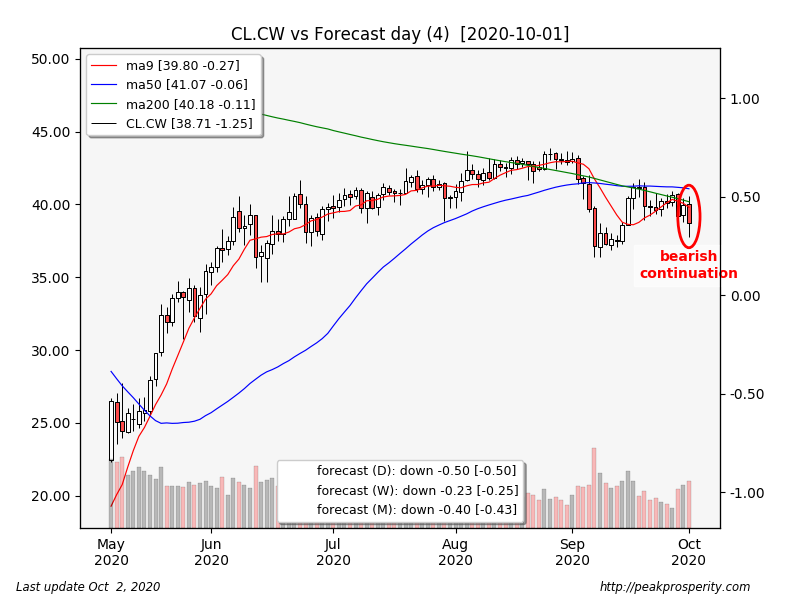 SPX climbed +17.80 [+0.53%] to 3380.80 on moderate volume. The short black candle was a bullish continuation, forecaster climbed, moving higher into its uptrend. SPX is in an uptrend in all three timeframes.

NYSE Advance ratio was 68%; that’s perhaps neutral-to-positive given today’s rally. Today’s rally does mark a new closing high for this cycle, and SPX did manage to close abve the 50 MA, which is a positive sign. 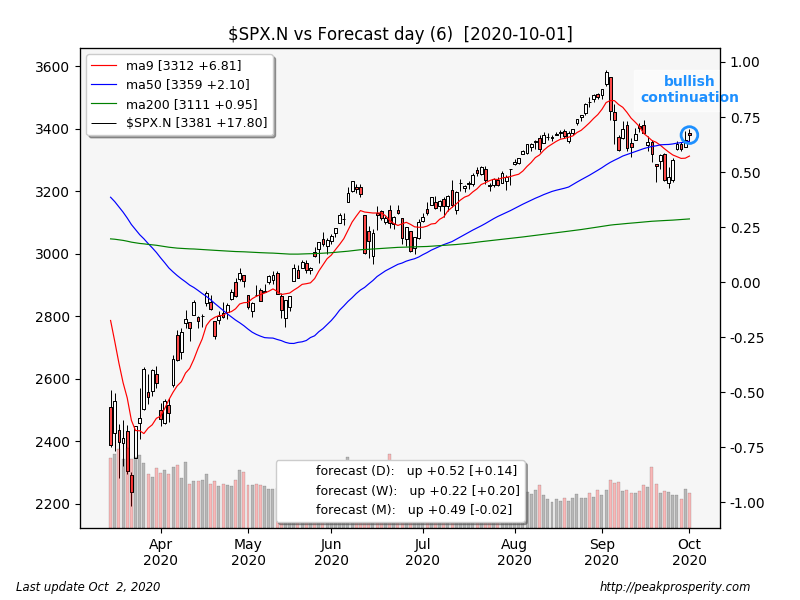 NYSE Advance ratio was 68%; that’s perhaps neutral-to-positive given today’s rally. Today’s rally does mark a new closing high for this cycle, and SPX did manage to close abve the 50 MA, which is a positive sign.

TLT inched up +0.06%. The long white candle was a possible bullish reversal (36%), forecaster dropped, moving deeper into its downtrend. TLT is in an uptrend in the weekly timeframe. The 30-Year yield was unchanged at +1.46%.

TY inched up +0.02%. The high wave candle was a reasonably strong bullish reversal (49%), forecaster climbed, moving higher into its uptrend. TY is in an uptrend in the daily and weekly timeframes. The 10-Year yield fell -1.0 bp to +0.68%.

No material change for bonds.

JNK inched down -0.12%. The doji/NR7 candle was unrated, forecaster dropped, but remains in an uptrend. JNK is in an uptrend in the daily timeframe.

Crappy debt is hinting at risk off. 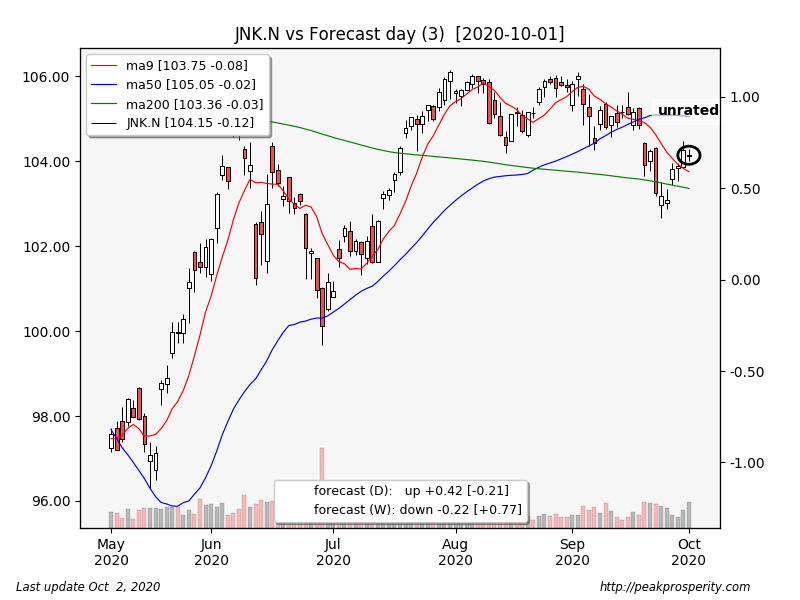 The GLD ETF tonnage on hand climbed +7.30 tons, with 1276 tons remaining in inventory.

Gold, silver, and the miners all rallied today more or less independently of currency moves, at least for the most part. Both gold and the miners were able to erase yesterday’s losses; silver is still struggling.

While the buck continued moving lower, it didn’t drop all that hard. Still – no bullish reversal today.

Now then, to the October Surprise – actually, to The Mother of All October Surprises: Trump tested positive for COVID-19. What does that mean? How will that affect prices? What is the timeframe of this event?

The market’s initial response (in the futures markets) was risk off: gold moved higher, crude and equities sold off. So far, the response has been fairly muted.

The disease was caught in the pre-symptomatic state – very early in viral replication. Trump has no symptoms. What are his possible outcomes?

Case 1) Trump moves through this with a minimum of fuss. He is in “quarantine”, yet he continues to give speeches, give interviews to his favorite reporters (i.e. everyone on Fox), and eventually he tests negative, and emerges victorious. It is no big deal.

Case 2) Trump initially does well, but then starts to suffer some symptoms, and must take 2-5 days off. He remains in command. He eventually recovers. It basically looks like the flu.

Case 3) The treatment regime doesn’t work so well; Trump is hospitalized – the “Boris Johnson” outcome. Oxygen, all sorts of fuss, Pence has to take over temporarily. Trump eventually recovers, but, it is absolutely no fun at all for him.

Case 4) Same as case #3, but Trump dies in hospital. Pence takes over.

So – what’s my assessment of probability of outcomes, and timeframes?

Trump apparently has no symptoms. He was tested because his aide, Hope Hicks, tested positive earlier in the day. Either Trump is an asymptomatic, or he has been detected early in the cycle.

Let’s assume he will take The Zelenko Protocol: HCQ+AZI+Zinc, optionally with calcifediol. What does that look like?

Raoult says that for “elderly patients”, there is a 95% chance to avoid hospitalization, and a 99.5% chance of avoiding death. If we take into account presymptomatic treatment, let’s say results are twice as good. If we add calcifediol, let’s double that again. Trump is obese – BMI 30. Cut chances in half for that.

Under Raoult’s protocol, in a relatively happy outcome, viral clearance will be achieved in 10 days (92% chance). That’s without zinc.

So, most likely (call it 97%), 2 weeks from now, Trump will emerge from quarantine, having beaten COVID-19, with a much smaller chance of having the Boris Johnson experience, and/or dying.

That’s just in time for October options expiration. For those inclined to wager on the outcome.

So, a very-long-odds play for death/hospitalization (which would probably be very risk off) 4 weeks from now, and a much more likely risk on play within the next 2 weeks.

Either way, Trump’s care will make national news. If it turns out to be case #1/#2, literally everyone will want to know what treatment he had. This could revolutionize COVID-19 treatments for at least half the country.

“I want the same stuff Trump got.”

I’d also say that case #1/#2 will also lead to a positive bump for Trump in the polls. It will motivate his base for sure, he will get an added sympathy vote, he will get to empathize with all the COVID survivors – the “Trump is a rich, heartless killer” line just vanishes. He can no longer be blamed for all those COVID deaths – he will be a COVID survivor too.

Here’s a comic I dug up from 2016 that I think captures the magnitude of this event: 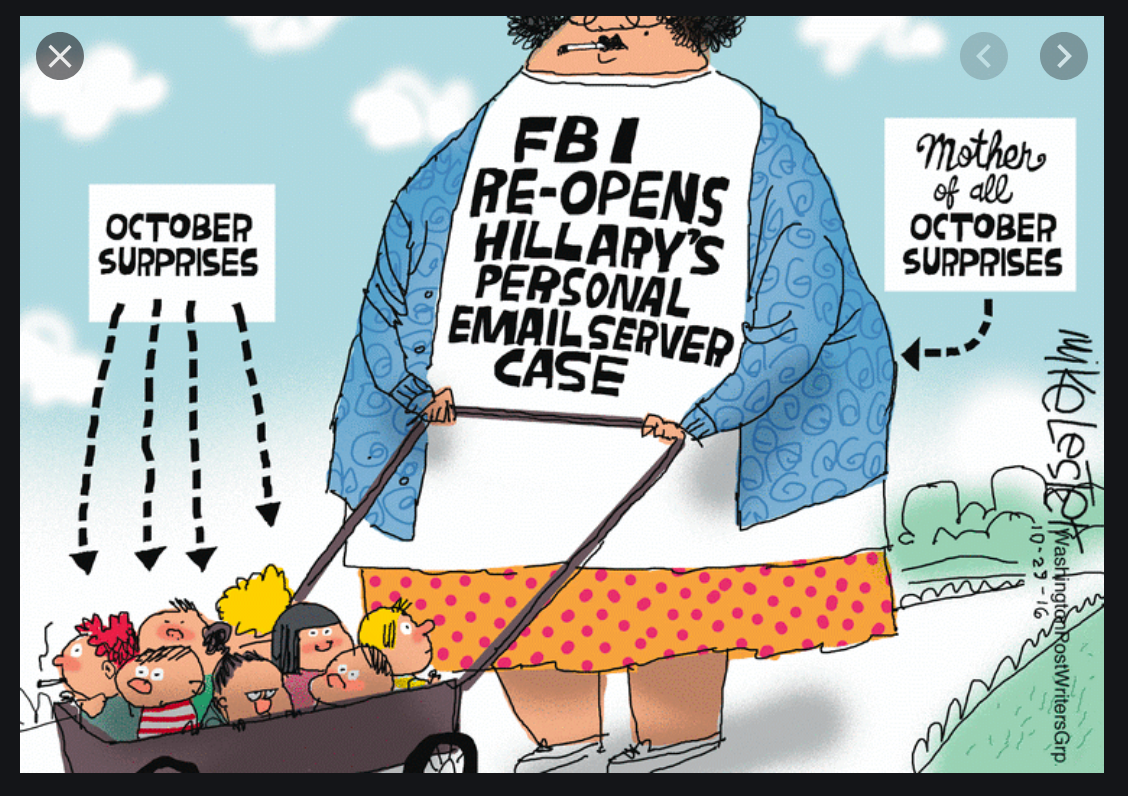 Maybe that is why my miner call options went up over 100% in one day, yesterday. Very weird.

My father-in-law died three days ago. Nobody will issue a death certificate, I guess because they think it was COVID related. He did have grandchildren living with him that went back to school 3-4 weeks ago, so he could have easily been exposed.

I don’t know what to think, but this sh*t with not issuing a death certificate is driving my wife’s family crazy. They can’t plan his funeral and have no idea when they will be able to.

My best friend’s father died on the same night that my father-in-law did. No cause of death has been issued for him either.

I remember reading that the NYFD reported a 300% increase in fatal heart attack calls at the beginning of the COVID-19 pandemic there. Maybe this is the beginning of wave 2. I just don’t know.

The idea that you can segregate the weak/old from the young is pure fallacy. Our greatest generation is going to be killed off by this virus, and their much-needed wisdom is dying with them.

Trump is in that same range.

If they get vitamin-D, and HCQ+AZI+zinc, they stand a 99.5% chance of living.

Sorry to hear about your father in law.