Gold mostly chopped sideways today, apparently unaffected by the strongly rising dollar. The spinning top candle was a bullish continuation; the forecaster dropped -0.05 to 0.0, which is a sell signal (just barely) for gold.  Gold remains above its 9 MA, which is a positive sign. 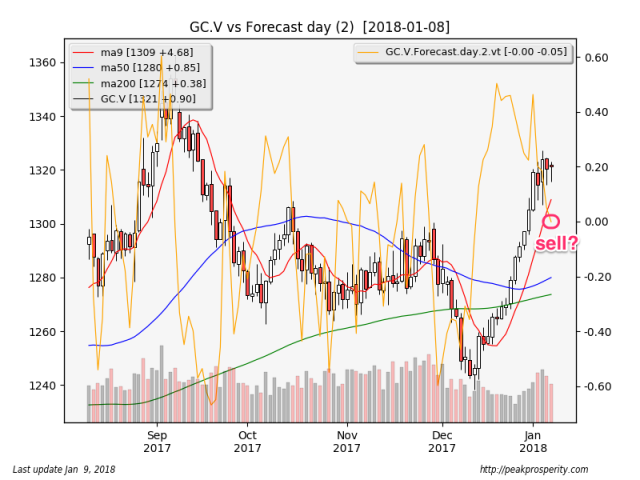 Silver dropped steadily for much of the day, making a new low to 17.06 in the late morning in US before bouncing back into the close. Print was a bearish engulfing – which was actually just a bullish continuation. Forecaster disagreed, dropping -0.21 to -0.13, which is a sell signal for silver. Silver is definitely looking weaker than gold right now.  Still, silver is also above its 9 MA, which is good news. 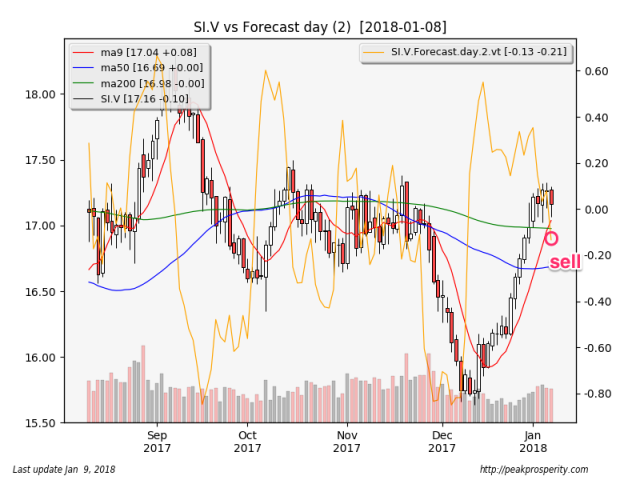 The miners sold off for the first two hours, and then mostly moved sideways for the rest of the day. GDX fell -1.06% on moderately heavy volume, while GDXJ dropped -1.54% on very heavy volume. XAU forecaster plunged -0.18 to -0.26, moving deeper into a downtrend.  XAU has dropped through its 9 MA; that’s a bearish sign.  Miners usually lead, so this looks unfortunate for the near term moves in the PM group. 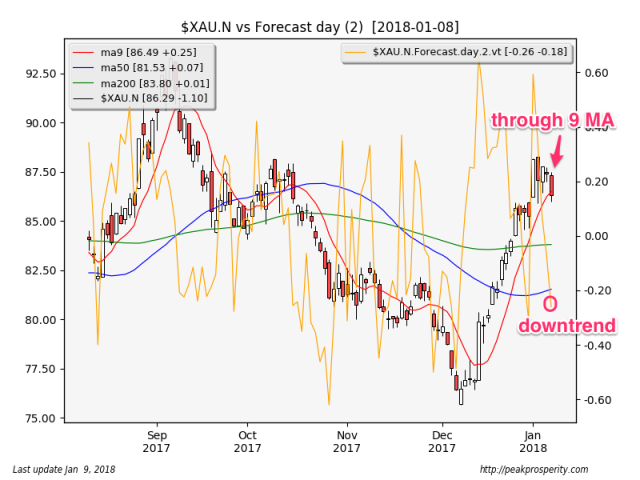 Platinum moved up +0.23%, palladium climbed +0.76%, and copper fell -0.03%. Platinum made a new high – it continues to be relatively unaffected by the selling pressure that the rest of PM is experiencing. Although copper has fallen 5 of the last 6 days, it still remains in an uptrend.

The buck rallied +0.41 [+0.45%] to 92.05. Print today was a confirmed NR7, which had a 75% chance of being a bullish reversal. Forecaster jumped +0.32 to -0.20. That’s still a downtrend, but one that appears to be in the process of reversing. A stronger dollar, as always, will cause problems for PM. In looking at the news, I’m not really sure what caused the dollar rally.  Buck is back above its 9 MA; that’s bullish. 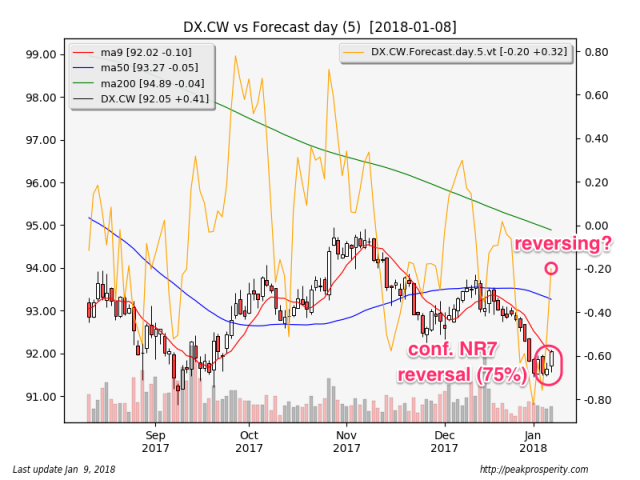 Crude rose +0.31 [+0.50%] to 61.89. Mostly crude moved sideways today, moving higher in the afternoon in the US. From what I can see, crude seems relatively stable here above 60; energy equities continue to move steadily higher, with oil services doing especially well – big moves on very heavy volume. The equity market is telling us that it thinks the oil glut may be over. Certainly we’ve seen some bearish-looking EIA reports, but they haven’t seemed to dent confidence in oil prices. Forecaster fell -0.05 to +0.14, which is still an uptrend. API release due out tomorrow after market close.

TLT fell -0.06%, continuing to chop sideways. TY dropped -0.01%, also going nowhere. TY is right at multi-month lows, and the technicals remain bearish: forecaster is at -0.48, and the southern doji candle print was a bearish continuation. However – the bounce in utilities might be a leading indicator for bonds.

JNK tried to rally, but the rally failed, dropping -0.11% and printing a shooting star candle which had a 32% chance of marking a top. Forecaster fell -0.14 to +0.40. That’s still a relatively strong uptrend.

CRB rose +0.01%; 3 of 5 sectors rose, led by industrial metals. Momentum for commodities is starting to flag a bit.

Sell signals in gold, silver, the miners – but not platinum, palladium, or copper. The dollar may be reversing higher, and we are seeing hints of a low in utilities – those two things might be related. Euro printed a swing high today. Is this peak-Euro-for-now? Peak enthusiasm for the possible German grand coalition? Money from Europe buying the dip in yield here in the US?

Gold probably corrects from here.  How far probably depends on two things: the buck, and what happens to the rest of the commodity complex.