The Euro spent much of the day rallying – from the open in Asia through about 10am in New York.  However after peaking at 124.70 (+0.70), the Euro then plunged, unwinding its rally and dragging gold and silver right down with it.  The FOMC announcement caused the Euro to plunge further – at least initially – but it bounced back somewhat.   By end of day, the Euro was up just +0.03.

For much of the day, gold tracked the Euro, first rallying, then plunging, and then falling further after the announcement at 2pm.  But about an hour after the announcement, gold decided it was going to rally all on its own.  It powered higher while the Euro languished, managing to close near the day highs.  I thought this end of day move independent of currency was a sign of strength for gold.  The candle print was a high wave – a bearish continuation. Forecaster rallied +0.35 to -0.14, which is still a downtrend, but much improved over the last few days. Gold remains above its 9 MA, which is positive. 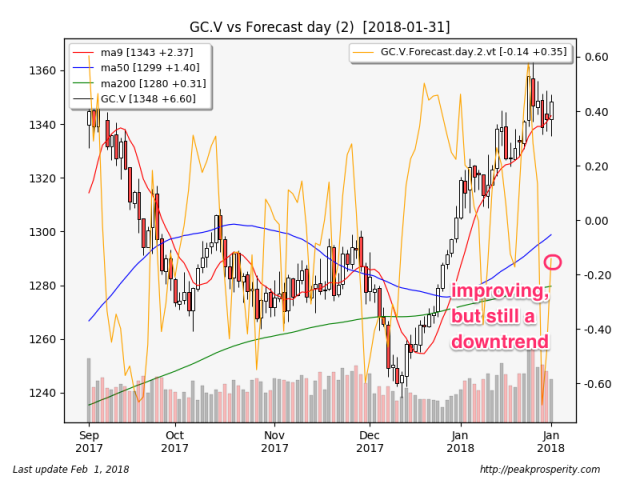 Silver looked stronger than gold today; it rallied steadily for much of the day, encountering some volatility at the time of the FOMC announcement at 2pm, but then moving higher into the close.  Silver’s candle print was swing low/bullish engulfing, which had a 50% chance of being a bullish reversal. Forecaster jumped +0.27 to +0.04, which is a buy signal for silver. Today’s price action pulled silver back above the 9 MA, which is a positive sign. 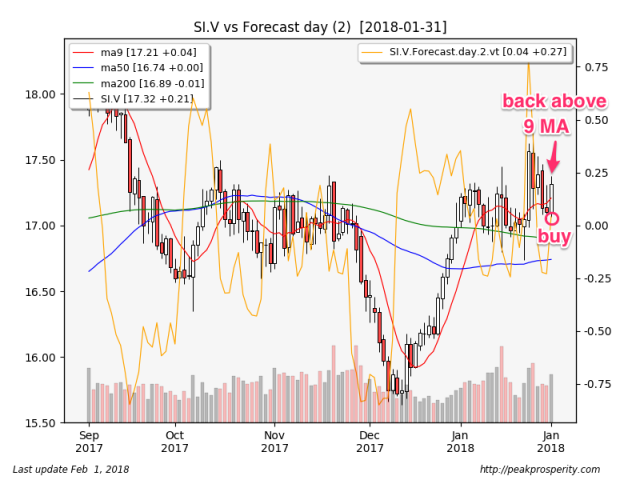 The miners were slightly positive going into the FOMC announcement, but then sold off hard as gold, silver, and the Euro fell after the release. Gold’s recovery an hour later pulled the miners back into positive territory.  GDX ended the day up +1.28% on heavy volume, and GDXJ climbed +1.69% on extremely heavy volume. Both ETFs printed bullish high wave candles; GDX had a 48% chance of being a bullish reversal, while GDXJ’s candle had a 61% chance. Both candles had long lower shadows and heavy volume, which is a positive sign – it suggested there was a lot of dip-buying going on today. XAU forecaster rose +0.43 to -0.11; that’s still a downtrend, but much improved over yesterday. It was good news, but it looks as though we’ll need confirmation for this to be a reversal for the miners. 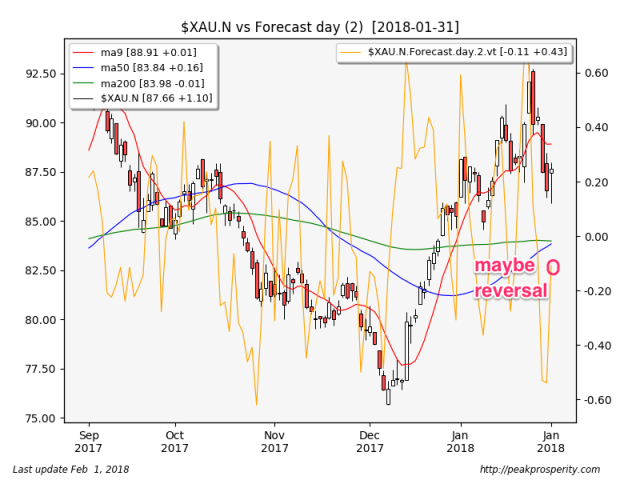 Platinum rose +0.51%, palladium plunged -2.39%, and copper rose +0.31%. Palladium appears to be in free-fall right now; it has doubled since it hit a low of $500 back in early 2016, but since marking the top at 1133 in mid-January, it has plummeted 10% in just two weeks, with more than half of that happening in the last two days. Palladium dropped through its 50 MA today, which is significant since the 50 has acted as support all during its recent rally.  Copper on the other hand is back in an uptrend (forecaster +0.35 to +0.02 today) although really it has just been chopping sideways. Platinum looks like gold – down off its highs, but trying to recover. 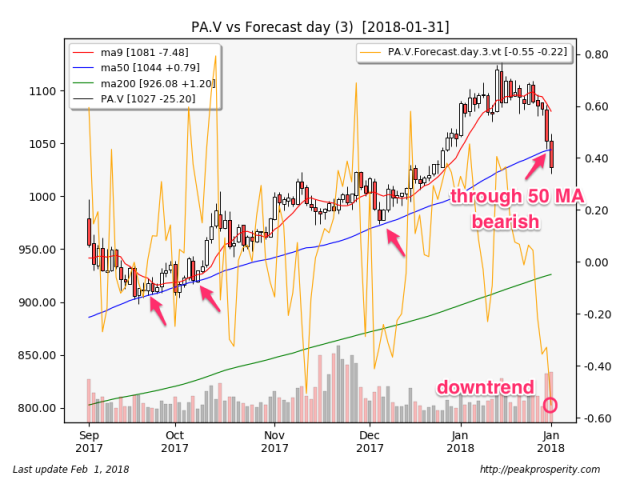 After a lot of volatility, the buck ended the day down -0.05 [-0.06%] to 88.82. Candle print was a southern doji, which had a 50% chance of marking the low. Forecaster rose +0.15 to -0.36. Still no concrete reversal for the buck, which is just chopping sideways right now. The FOMC announcement didn’t seem to change direction for the buck either up, or down.

TLT rose +0.59%, erasing yesterday’s loss and printing a swing low (49% reversal). Of course, TLT does this sort of thing frequently – it is very volatile. TY rose +0.02% after first making a new low; the doji star candle pattern had a 62% chance of being a reversal. Forecaster rose +0.10 to -0.46. This is a positive sign for TY – and that lines up with the rally in utilities, which do seem to be slowly tracing out a low.  Still, with the macro trends pushing bond prices lower, any rally that eventually shows up is probably just an opportunity to sell.  TNX (10-year yield) ended the day at +2.72%.

JNK rose +0.16%, recovering some of yesterday’s big loss. However, JNK remains in a downtrend.

So what did the FOMC say? The words that changed from the previous announcement included the following: inflation is now supposedly moving up and stabilizing at 2% sometime this year – a change from the last report, where it was seen as “below target.” Household spending moved up from “moderate” to “solid.” That’s pretty much it.  These two changes were enough to move (March) rate rise chances from 72% to 83%.

Watching the movement of currency and PM in real time, I must confess I have no clue why the metals sold off hard after the release, only to rally equally hard an hour later in the opposite direction. “Its just what happens after FOMC” – and this time it was positive for gold.

Gold and the miners did well today, but they have yet to fully recover from this week’s sell-off. Silver was a surprise good-performer, but it doesn’t feel to me that it is out of the woods just yet.