Gold rose +15.00 to 1212.40 on moderate volume, and silver jumped up +0.45 to 17.57 on heavy volume. A large drop in the dollar encouraged gold and silver to stage strong rallies, with silver breaking out to new highs.

The move in gold today was mostly about the buck, which dropped -0.92 to 99.45. Blame for the move was tied to Trump advisor Peter Navarro, who made comments that indicated that the Euro was overly weak, and that Germany was using the weak Euro to its advantage in trade. The timing of the comments coincided with the initial plunge in the buck, according to a chart in this Bloomberg article here: https://www.bloomberg.com/politics/articles/2017-02-01/the-world-s-base-currency-gets-an-injection-of-political-risk

The article also goes on to say that the buck is now starting to suffer from political risk, which is not a normal thing for the dollar. This new degree of political risk is gold positive; people like to say that nothing underpins the dollar because it is a fiat currency, but that’s not true. Confidence underpins it, and just looking at its performance in recent weeks, the currency markets seem to be having a bit less confidence in the Trump administration.  Of course that’s just a guess.

If we were looking for a new catalyst for gold, it might just be political risk. Can that beat a breakup of the EU? I don’t think so. But at a minimum, if the rest of the world remains quiet, Trump’s actions on the world stage and the external perception of upheaval inside the US (CALExit??) is a recipe for a weaker currency, and thus a stronger price for gold. 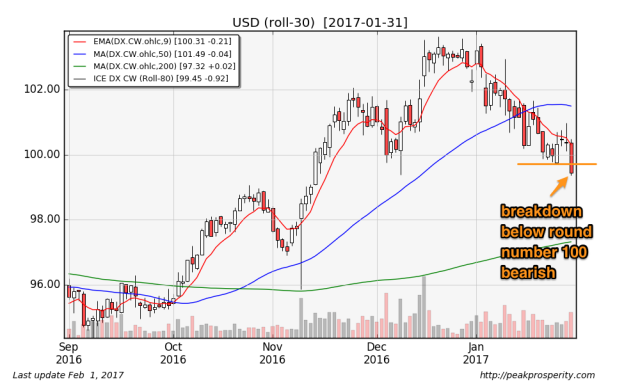 As a result of the big move in the buck, gold broke sharply higher, eventually closing far above the 9 EMA. Candle print was a “long white” candle, which the candle code sees as bullish. Much of the move was currency-related, but there is also the upcoming FOMC meeting, which could also be affecting prices.  A lessened prospect for those promised three rate increases would be positive for gold. 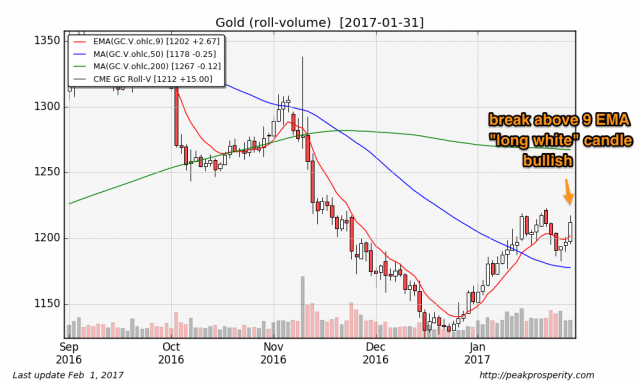 Silver’s move far outstripped gold, with silver breaking out to new highs. Candle print was an “opening white marubozu” which is bullish, as is the breakout. The gold/silver ratio plunged -0.94 to 68.98, a big move. While you can use the gold/silver ratio to measure silver’s recent outperformance, you can also see the difference in the charts; silver made a strong new high today, while gold has yet to break out. That’s bullish for PM overall, and it suggests to me that at least some of the buying may be related to increased inflation expectations. 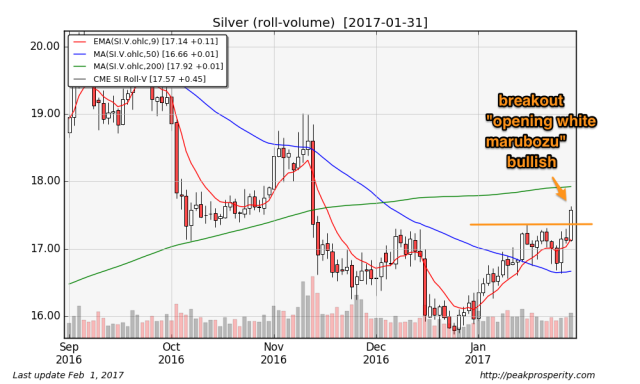 Mining shares did relatively well, with GDX up +3.37% on heavy volume, while GDXJ rose +2.83% on moderately heavy volume. The candle print today for GDX was a “closing white marubozu/NR7”, which describes a relatively small intraday trading range that ended up closing at the highs. The print turns out to be relatively bullish. The vast majority of the gain in GDX was the gap up at the open.  Volume was decently strong, which says there were a reasonable number of buyers. 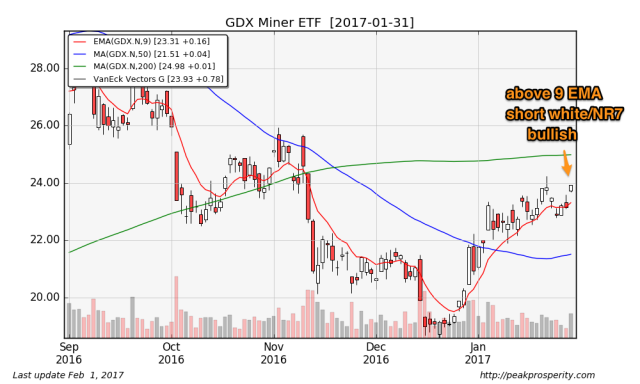 Crude attempted to rally today but was unable to hang on to most of its gains, closing up +0.23 to 52.80. After market close, the API report revealed a surprisingly bearish 5.8 million barrel crude inventory build, which caused momentary 0.15 spike down in the market – not much of a move.  Right now the crude market appears to be about equally torn between good OPEC adherence to the December agreement, and the return of shale drilling in the US. Rig counts in the US continue to climb, as does production. There is also concern that peace might break out in Libya, which might bring back perhaps 500k barrels back on line.  All of this conspires to keep oil roughly pinned in a range between 51 and 54.

SPX fell -2.03 to 2278.87. The market was seriously bifurcated, with sickcare (XLV:+1.60%) and utilities (XLU:+1.55%) doing extremely well, while industrials (XLI:-0.88%) and a number of other sectors fell. Naturally the rally in sickcare was due to Trump, who was portrayed as backing away from his “cheaper drugs” position following a “positive” meeting with Big Pharma CEOs.  Poor Big Pharma, too many rules and regulations stop them from…from…I don’t know what.  VIX rose +0.11 to 11.99.

TLT rallied +0.70%, moving above both the 9 and 50 MA. I don’t pretend to know where bonds are going; currently they appear to be struggling to put in a low.  If the FOMC starts backing away from the 3-rate rise projection, that should be bullish for bonds.

JNK fell -0.03%, remaining within a very short distance from its recent high. JNK remains in a strong uptrend.

The FOMC announcement happens tomorrow at 14:00; this traditionally is a big market-mover. The utility and bond market rally today seems to be suggesting “fewer rises rather than more”, although that’s just a guess. Will the Fed focus on inflation, or the unpleasant GDP print from last week? “Sure, let’s raise rates with GDP at the equivalent of 0.9%.” When put that way, it seems unlikely, but in this environment, who knows what they’ll do.

I’d guess that a signal towards fewer rises will be gold-positive; likely gold would break out higher if the FOMC backs away from its 3 rate-increase projection, but again, that’s just a guess. If the big guys already know the answer, that might explain the rallies today in XLU, TLT, gold, and silver.

The charts have suddenly started to look quite positive, but what the FOMC actually says tomorrow will dominate.

This morning there were some economic-positive manufacturing and labor statistics released at 08:15 and 10:00 which caused the buck to rally sharply, and gold to drop.  But that all reversed after the FOMC announcement at 14:00, which talked about inflation.  Rate rise chances dropped marginally.  I think the market was worried the Fed would sound increasingly hawkish, but that didn't happen.  They acknowledged inflation is coming, but no increase in their desire to raise rates.

All that boils down to a reasonably large drop in the buck immediately following the announcement, which pulled gold back up out of the dumps and into positive territory.

Now that FOMC is over, we can look forward to Nonfarm Payrolls on Friday at 08:30.  Most likely, good news for payrolls will be bad news for gold.

I will stand with my December prediction and say that they do not raise in March.  I expect them to hike only one time this year, probably toward the end of the year, like they've done for the two previous years, regardless of what they might say in the meantime.

Our friendly futures market agrees wholeheartedly with the first half of your prediction: no rate rise in March.