There were a number of cross currents today. Over the weekend, the SPD delegates grudgingly approved the grand coalition agreement, which was Euro positive. Then the US Senate agreed to pass a short term funding bill that put an end to the government shutdown after one day. That was dollar-positive. The Euro ended up winning the struggle today, moving up +0.31% – which pulled the dollar down -0.20%.

Gold chopped sideways-to-higher today in a relatively narrow range, printing a neutral doji candle on the day. Still, the forecaster saw something it liked, rising +0.34 to +0.17, issuing a buy signal for gold. Certainly gold remains above its 9 MA – the 9 has acted as support for the last 3 days, which is a positive sign.

COMEX GC open interest fell by -11,760 contracts today; 36 tons of paper gold, gone. That’s a pretty big drop, it smacks of short-covering, which doesn’t make much sense for this point in the cycle if we assume the rinse section of the wash-and-rinse cycle is about to start. If the OI drops again tomorrow…that might just mean that the commercials are expecting higher prices ahead. 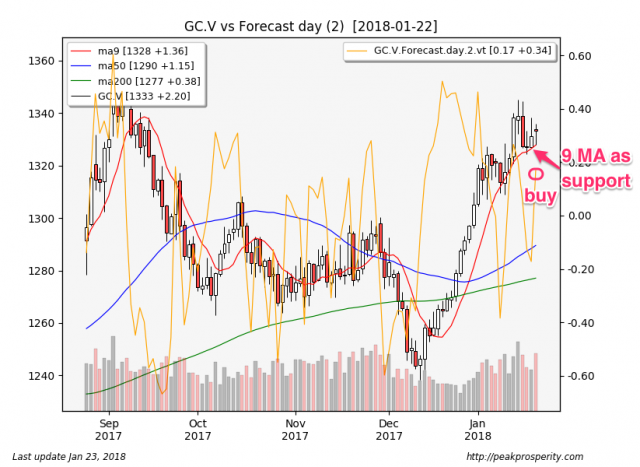 Silver also chopped sideways, but its bias was slightly negative. The forecaster noticed this, and dropped -0.13 to -0.11, which is a sell signal for silver.  Still, silver appears to have found support at its 200 MA.  Mostly silver appears to be moving sideways rather than selling off. 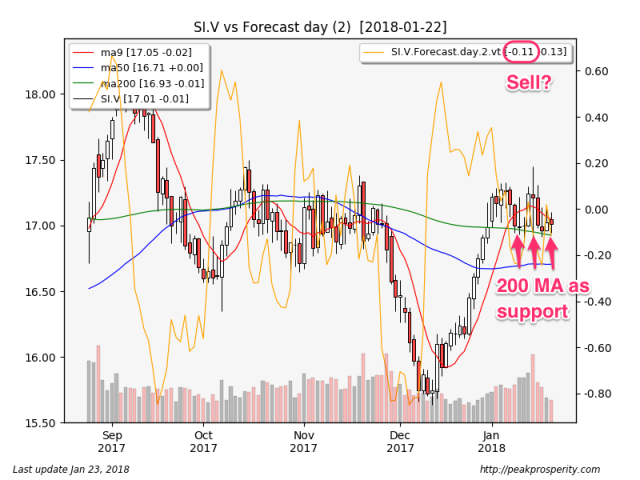 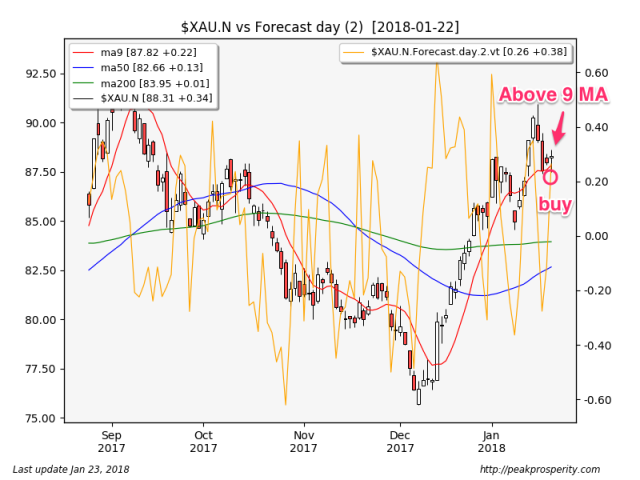 Platinum plunged -1.53%, palladium fell -0.45%, while copper rose +0.66%. The big drop in platinum resulted in a bearish engulfing (50% reversal) plus a sell signal from the forecaster (-0.35 to -0.08). I suppose after a $140 rally it was bound to happen sometime. Copper is trying to figure out if it wants to resume its uptrend, while palladium remains near its highs. Volume on today’s platinum plunge was very heavy.

Crude rose +0.46 [+0.72%] to 63.94. Crude had a big spike higher at around 11am, plunged back down again and then drove higher into the close. I have no idea what caused it, but whatever it was, the market ended up concluding it was good news. Forecaster issued a buy signal for crude today, rising +0.23 to +0.07. Is this all the correction we get for crude? Could be.  Oil equities sure think so.

Both gold and the miners have found support on their 9 MA lines, as you would expect them to do if the uptrend were still intact.  Forecasters for both have signaled buy once more.  Silver remains weak, and possibly under pressure from the managed money shorts, while gold saw a big drop in open interest that suggests the commercials might be covering – here of all places.

Crude is looking reasonably strong again after a week of mild retracement, and the buck may be headed lower once again.  Certainly the buck isn’t looking very strong right now.

Unless that dollar takes off, I suspect gold will manage to continue moving higher.  That’s what the tea leaves say right now.