UK PM May managed to survive the no confidence vote – so there will be no new election. What happens next is anyone’s guess. At least GBP managed to recover all of yesterday’s losses, so there’s that.

Gold mostly chopped sideways, but managed to close at the highs of the day. The long white/NR7 candle was unrated, and forecaster dipped slightly, remaining in a mild uptrend. Gold remains in an uptrend in both currencies, and all timeframes. Looking at the chart pattern, it appears to be a pennant pattern – which is usually a bullish contination.  Monthly and weekly forecasters both point higher.  My guess: gold probably breaks out to the upside in the near future, more likely than not. 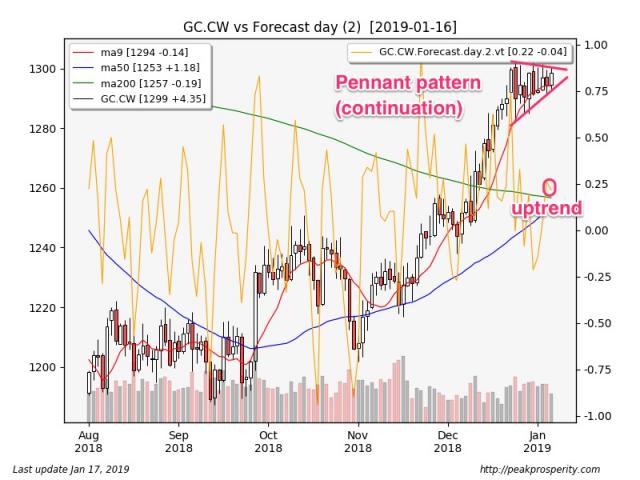 Silver chopped sideways too, dropping 10c at about 7:20 am but bouncing back fairly quickly. The long-legged doji was neutral, and forecaster moved higher, strengthening the uptrend somewhat. Silver remains in an uptrend in both the daily and monthly timeframes.  Silver’s pennant pattern doesn’t look quite as strong as gold, but silver’s forecaster remains in an uptrend in spite of the recent move lower. 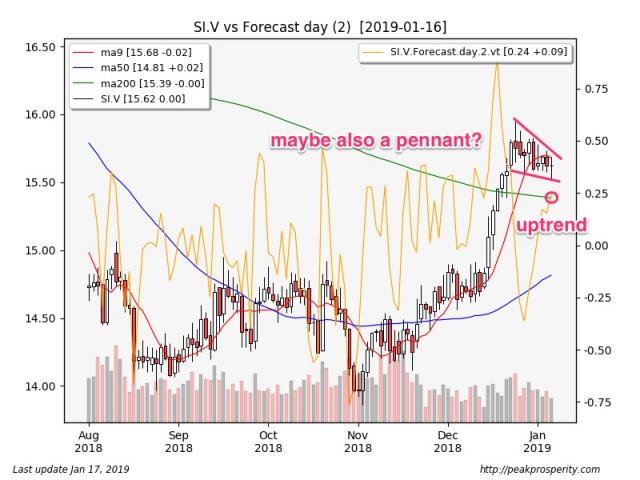 Miners were mixed; GDX fell -0.05% on very light volume, while GDXJ rose +0.30% on very light volume also. XAU climbed +0.25%, with the bullish harami looking neutral, and forecaster moving a bit lower in what is already a strong downtrend. XAU remains in a downtrend in all 3 timeframes. Today’s move wasn’t much of a bounce – there wasn’t a lot of dip-buying after yesterday’s fairly significant drop. It is probably time to just watch the miners until they start behaving better. 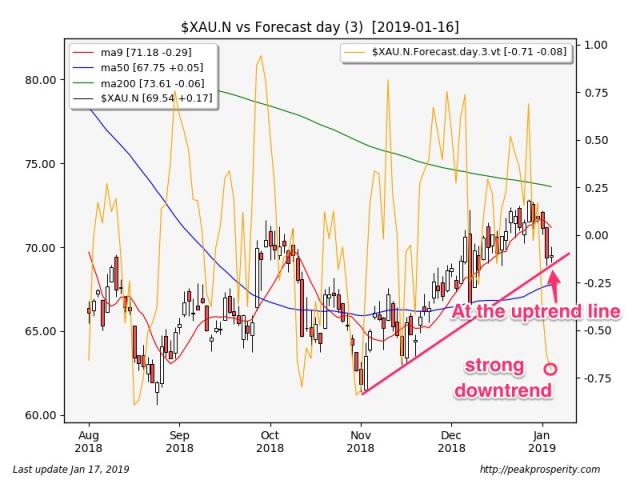 Platinum moved up +0.86%, palladium jumped +3.37% to yet another new all time high, while copper rallied +1.14%. The other metals turned in a pretty good day. Did I miss a bet on palladium or what?

The buck was unchanged today, at 95.48. The short white candle was unrated, and forecaster moved a bit lower, but remained in a slight uptrend. The buck remains in an uptrend in both the daily and weekly timeframes, but … they both look fairly weak. The monthly continues to point strongly lower.

GBP had its big rally last night after market closed – when the UK parliament decided not to support Labor’s No Confidence motion.

Ok, after thinking over BRExit, here is my sense: Establishment Conservative UK is trying to figure out how to Remain without pissing off their BRExiteer wing, which would have the immediate effect of ripping the Tory party in half and giving government to Labor. Remain is what the companies want (duh) – who wants to lose access to all that cheap labor from Eastern Europe? So May comes up with a non-starter, and “nobody wants” hard BRExit, but BRExit-means-BRExit, and so what’s left? A non-BRExit BRExit? Put things off for a while? Scare people some more until they give the companies what they want?

Crude rallied +0.37 [+0.71%] to 52.79. Mostly crude just chopped sideways in a narrow range, with some excitement caused by the EIA report (crude: -2.7m, gasoline: +7.5m, distillates: +3.0m). The release caused oil to drop about a buck immediately after the report was released, but ultimately dip-buyers pulled prices right back up by end of day. The short white candle was neutral, and forecaster moved slightly higher, remaining in a fairly strong uptrend. Crude remains in an uptrend in all 3 timeframes. Today’s price action looks fairly bullish for crude – a market rally on bad news is always positive.

SPX rose +5.80 [+0.22%] to 2616.10. SPX rose in the futures overnight, and tried to rally intraday but failed, resulting in a neutral-looking northern doji. Forecaster moved lower – the uptrend looks like it is fading – but SPX remains in an uptrend in both the daily and weekly timeframes.

TLT rose +0.10%, gapping down at the open but moving higher for much of the day. The thrusting candle pattern was bullish (43% reversal) and forecaster did move a bit higher, but remains in a strong downtrend. TY fell -0.08%; its short black candle was neutral, and TY forecaster dipped just enough to issue a tentative sell signal. Really it looks as though TY is trying to figure out where it goes next. TY is now in a downtrend in both the daily and weekly timeframes, but the monthly uptrend remains quite strong.

JNK rose +0.20%, which was just enough to move forecaster into a slight uptrend. JNK looks to be at a decision point too.

It may be that the enthusiasm behind January’s equity-market rally is finally running out of steam.   Gold is starting to perk up again after a very mild correction, the small bond correction may have run its course, and JNK is starting to look a bit tired.

I’m starting to see hints of a move back into the safe havens.  Miners have definitely underperformed gold recently; that also reinforces the safe haven nature of the move.

What’s the fundamental story behind palladium? Is it demand for electric cars?

Also, the S&P seems to be holding above 2600. This seems to be a key level and is now providing support (dagnabbit!) Looks like this may not be ‘the big one’ after all.