While it wasn’t a driver of US prices, the biggest news for me was out of the UK: Theresa May will go down in history as receiving the largest “no” vote margin in Parliament for her Unconditional Surrender BRExit plan – it was a 230 a vote margin. Dien Bien Phu, Little Big Horn, Bull Run, and now, Theresa May’s BRExit. Unbelievable. What can the plan be? Closet-Remain? A confidence vote comes next. https://www.independent.co.uk/news/uk/politics/brexit-news-latest-theresa-may-deal-vote-of-no-confidence-jeremy-corbyn-a8729871.html

Risk on news included China cutting taxes for small businesses (possibly via lowering the VAT), as well as increasing public spending in order to stimulate its faltering economy. Most likely this is what helped the risk-on sentiment today. Nothing like a bunch of free money to move prices higher.

Gold mostly chopped sideways, declining slightly but managing to avoid dropping less than the dollar rallied – which is a bullish sign. The dark cloud cover was neutral, and forecaster actually moved higher into an uptrend on today’s decline. While gold/euros didn’t actually rally (closing times for EUR and DX are different), the GC.EUR forecaster did issue a buy signal. Gold is now back in an uptrend in both currencies, and all timeframes.  I have to say, gold is looking surprisingly strong right now. 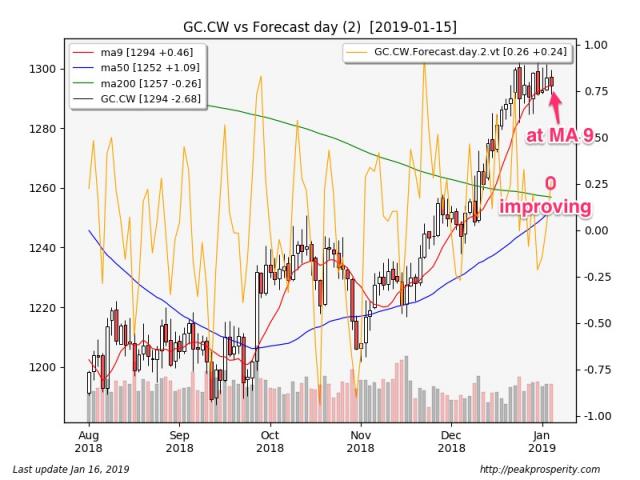 Silver mostly just chopped sideways in a narrow trading range with a slight upward bias. The long black candle was neutral, and forecaster was largely unchanged, remaining in in a mild uptrend. Silver remains in an uptrend in both the daily and monthly timeframes. Longer term (on the multi-year timeframe) silver appears to have double-bottomed – it needs a close above 21 to confirm this pattern. white candle was neutral, and forecaster just drifted slightly lower, but remains in an uptrend. 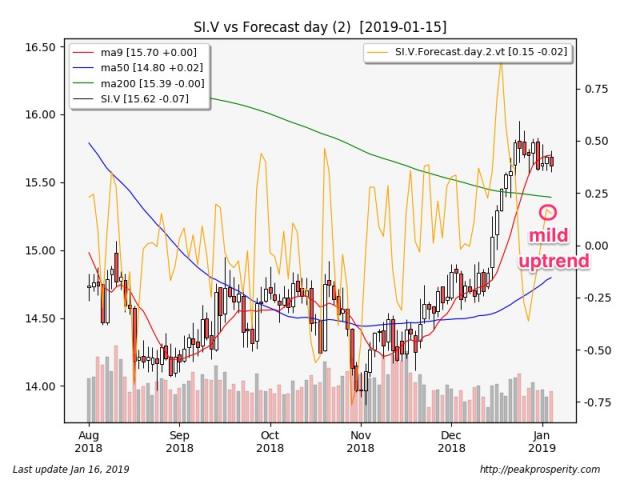 Miners had a bad day, with GDX dropping -1.53% on ,moderate volume, and GDXJ fell -1.79% on moderate volume too. XAU was much worse, losing -2.50%, forecaster dropping hard into a strong downtrend. Yesterday’s sell signal was a good idea, it would seem. The opening black marubozu was a bearish continuation. XAU remains in a downtrend in all 3 timeframes. The miners are really starting to look unhappy; price is fast approaching the two-month uptrend line.  Given current velocity, I’m not sure it will hold.

Good news is, once the selling pressure subsides, you can pick up your miners at a nice discount. 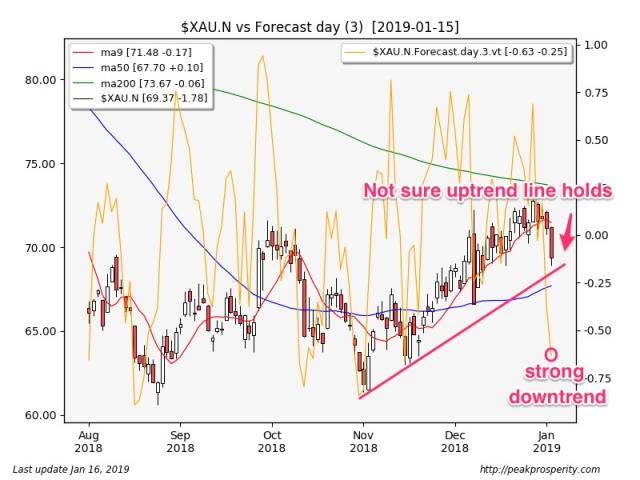 The buck rallied strongly today, the long white/confirmed bullish NR7 candle was quite bullish (47% chance this marks a near-term low), forecaster issued a buy signal in both the daily and weekly timeframes, and DX managed to close above its 9 MA all on the same day. Is this a real recovery for the buck? The monthly remains in a downtrend, and it has been right so far. I’m going with the monthly on this one.

Crude rallied +1.21 [+2.36%] to 52.42. The opening white marubozu was neutral, but forecaster jumped quite strongly, issuing a buy signal for crude. It looks as though the recent drop was just one of those 1-3 day reaction drops, with the uptrend remaining in place. The API report looked bearish (crude: -0.7m, gasoline: +6m, distillates: +3.2m) – another large build in product inventory, but crude didn’t seem to mind. Crude is now back in an uptrend in all 3 timeframes.

SPX rose +27.69 [+1.07%] to 2610.30, making a new high for this cycle. The white marubozu candle was a bullish continuation, but forecaster declined slightly, remaining in a mild uptrend. SPX remains in an uptrend in both the daily and weekly timeframes.

TLT fell -0.37%, making a new low, forecaster dropping into a strong downtrend. TY fell -0.07%, but forecaster actually rose on the day, issuing a buy signal for TY. TY is now in an uptrend in the daily and monthly timeframes. Is the bond correction over? The 10-year yield rose 0.1 bp to 2.71%.

JNK rose +0.26%, recovering from yesterday’s drop. However, JNK forecaster issued a sell signal; unlike SPX, JNK did not make a new high today. Maybe JNK is getting a bit tired.

I think crude is really driving the equity market right now – checking – yes, the correlation between crude and SPX ranges from 0.75 to 1.00, from mid-December until now.  That pre-Christmas pasting was all about crude plunging from 52 down to 42.  While Trump tweeted enthusiastically about low gas prices, traders took it as a sign that the global economy was seriously ill – so they sold, and sold some more.  Oops.  Probably not what Trump intended.

Gold continues to look strong, silver a bit less so, while the miners are selling off.  Gold’s strength belies the whole SPX recovery story – so far at least the dips in gold are all being bought.  China is having to print money to keep things afloat, Germany’s GDP release (+1.5%) avoided disaster but looks quite weak.