Gold rallied a bit in Japan making a high to 1298, but then sold off after Asia closed, plunging along with the Euro and the long bond into the close. Gold’s dark cloud cover was bearish (38% reversal), and forecaster plunged too, issuing a sell signal for gold. Gold ended the day below its 9 MA. Even so, gold remains in an uptrend in the weekly and monthly timeframes.

Futures are showing a 6% chance for a rate increase in March, and a split decision (13% rate cut, 14% rate increase) for December. 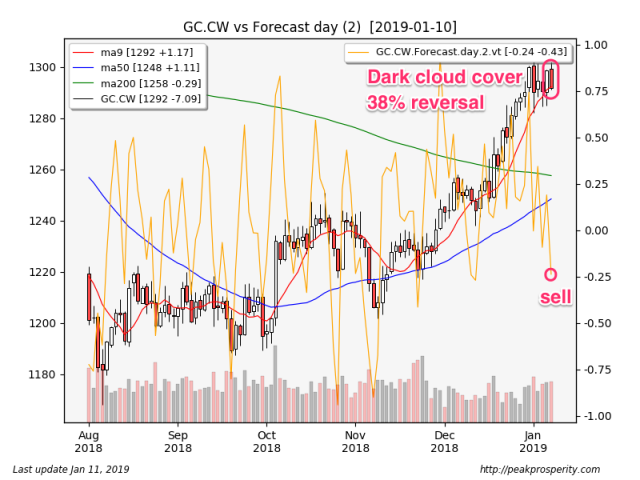 Silver chopped sideways, then fell along with gold and the Euro. Silver’s bearish engulfing was definitely bearish (41% reversal), and the daily forecaster remained in a downtrend. Silver ended the day well below the 9 MA for the first time in 3 weeks. That said, silver remains in an uptrend in the weekly and monthly timeframes. 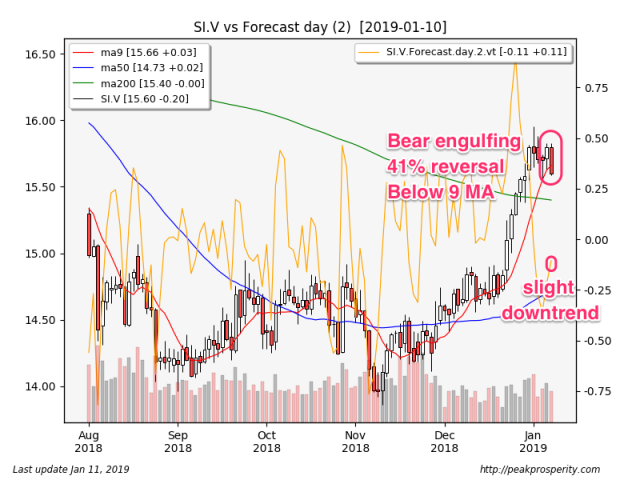 Miners sold off today, with GDX down -1.50% on moderate volume while GDXJ fell -2.35% on heavy volume. XAU dropped -1.66%; while the bearish harami print was actually just neutral, forecaster was hit hard, issuing a sell signal for the miners. Monthly forecaster also moved into downtrend, and the weekly is looking as though it might do the same in the near future. XAU is now in a downtrend in both the daily and monthly timeframes. Miners still remain above the 9 MA. 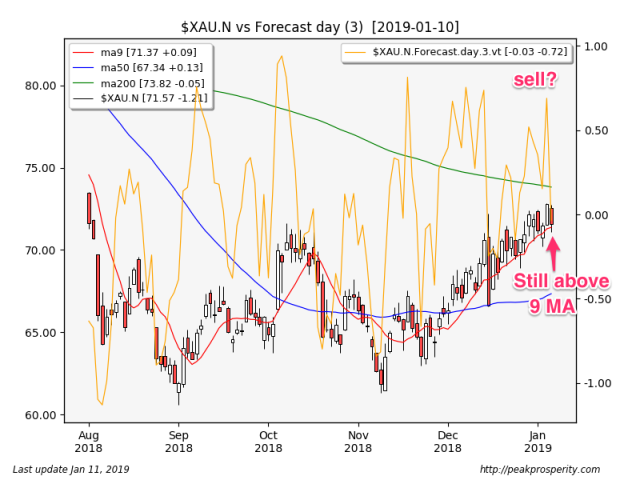 The buck rallied +0.32 [+0.34%], continuing its recent pattern of one day down followed by one day back up again. While the long white candle was somewat bullish (38% reversal), forecaster remains in a downtrend, although it did recover somewhat. The buck remains in a downtrend in all 3 timeframes. The rally today in the buck seemed to cause trouble for the metals.

Crude mostly chopped sideways in a narrow range, rising +0.13 [+0.25%] to 52.73. The northern doji was neutral, while forecaster dipped but remains in a reasonably strong uptrend. Crude’s rally stopped right at the 50 MA. Crude remains in an uptrend in all 3 timeframes. This makes 8 straight days up for crude.

SPX moved up +11.68 [+0.45%] to 2596.64. SPX was off more than 15 points in the futures markets overnight, but rallied soon after the open, roughly tracking crude. The short white candle was a bullish continuation, while forecaster was more or less unchanged, remaining in a reasonably strong uptrend. SPX remains in an uptrend in both the daily and weekly timeframes.

TLT fell -0.64%, making another new low. TLT remains in a short-term downtrend. TY also dropped, losing -0.16%; it tried to rally today but failed as equities rose off their lows. TY remains in a downtrend in both the daily and weekly timeframes. The 10-year yield rose +0.3 bp to 2.73%.

JNK had another great day, jumping +0.49%, making yet another new high. The closing white marubozu (RSI-7=81; overbought) was a bullish continuation, while forecaster remained in a strong uptrend. JNK has now cleared its previous high. JNK continues to support the risk on mood.

Its all systems mostly-go for risk right now – even with the government shutdown, the US-China trade talks, the Mueller investigation, and the chatter from Nancy and Chuck (!) about how immoral walls are, and how they don’t work, although of course most rich people’s houses (Obama!) are surrounded by immoral, old-fashioned, non-working walls – do what I say, not what I do. Ah, but I digress. I wonder if the kids of Congress-people are vaccinated. Wouldn’t that be interesting to find out?  Oops.  Digression again.

Ok, so is gold tipping over? It is starting to look as though it is. Daily forecaster is meandering lower, but given just how enthusiastic the junky debt market is right now, gold isn’t doing all that badly. My guess: we will probably get a correction in the metals and the miners, but it won’t be all that severe. That’s just a guess. Perhaps once the US-China trade settlement takes place, that would be a good buying opportunity.