Gold chopped sideways in Asia and London, then took off at around 8:30 am, and rallied through end of day. The short white candle was a bullish continuation, forecaster was unchanged, and remains in an uptrend. Gold is in an uptrend in the daily and monthly timeframes.

Gold/euros climbed +3.39 [+0.21%] to 1623.69 on moderately light volume. The short white candle was a low-percentage bearish reversal (25%), forecaster climbed, moving higher into its uptrend. Gold/euros is in an uptrend in all three timeframes.

Today’s rally was driven mostly by currency; we can see that in the gold/Euros move, which was quite weak. Gold/USD did manage to end the day (just barely) back above the 9 MA, which was a positive sign. 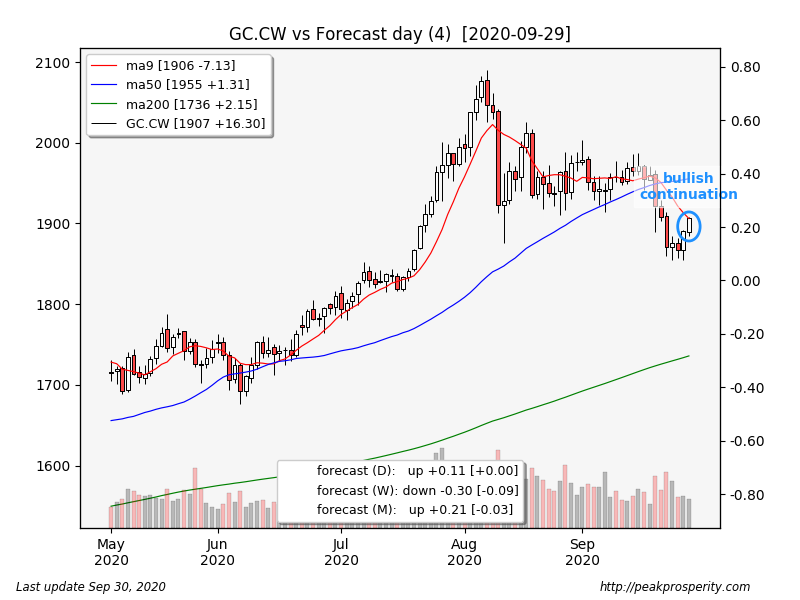 Silver moved lower in Asia, bottomed out around 1:30 am, then rallied for most of the rest of the day. The long white candle was a low-percentage bearish reversal (28%), but forecaster climbed, moving higher into its uptrend. Silver is in an uptrend in the daily timeframe, and is in a state of no-trend on the monthly.

Silver did a lot better than gold today, although the charts look roughly similar. There was a lot of shorting, we are coming up on first notice day and a bunch of people stood for delivery. Those things don’t go together very well – the banksters don’t look worried at all about deliveries this month. That’s not a great sign. Silver also appeared to run into resistance at the 9 MA. The candle print was weakly bearish, but it was a pretty good day, percentage-wise. Say I’m cautiously optimistic for silver. 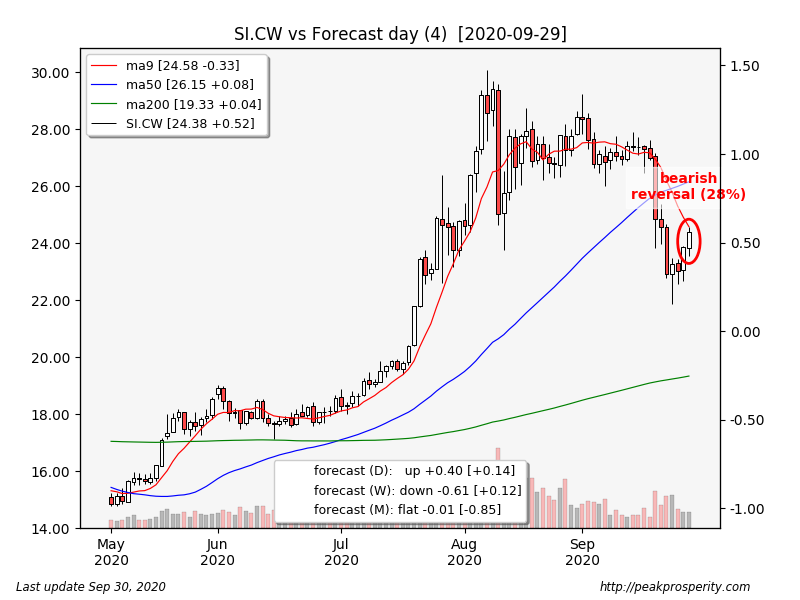 I dunno. Miners didn’t look that great to me today. It looked like they ran into resistance at the 9 MA. See the upper shadow? Neither gold nor silver looked like that. The candle print wasn’t particularly bearish, so that’s a plus. I’d still like to see a close above the 9. 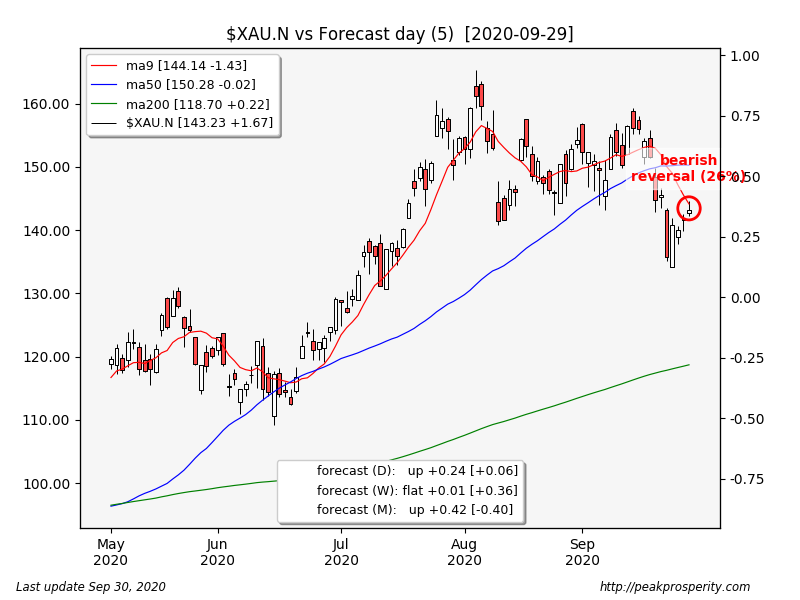 Copper was unchanged at 2.99 on moderate volume. The short white candle was a bearish continuation, forecaster dropped, moving deeper into its downtrend. Copper is in a downtrend in both the daily and weekly timeframes.

Copper’s rally is starting to look a bit like a dead cat bounce. (Truth be told – that’s how the miners look to me as well). 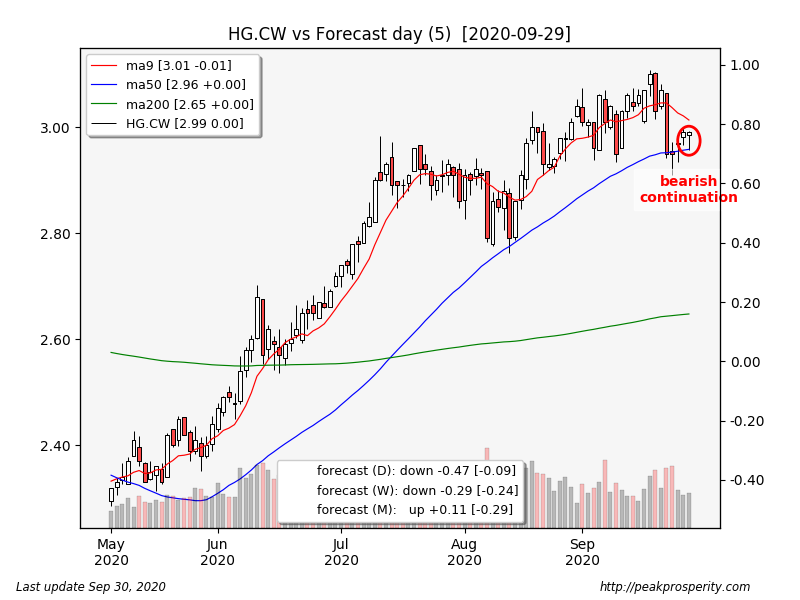 The buck dropped -0.37 [-0.39%] to 93.92 on moderately light volume. The long black candle was a bearish continuation, forecaster dropped, moving deeper into its downtrend. The buck is in an uptrend in the weekly and monthly timeframes.

Today’s drop took DX back below the 9 MA. Unfortunately, the falling buck is not providing as much support to PM as the rising buck took away. The buck found support right at the 9 MA. 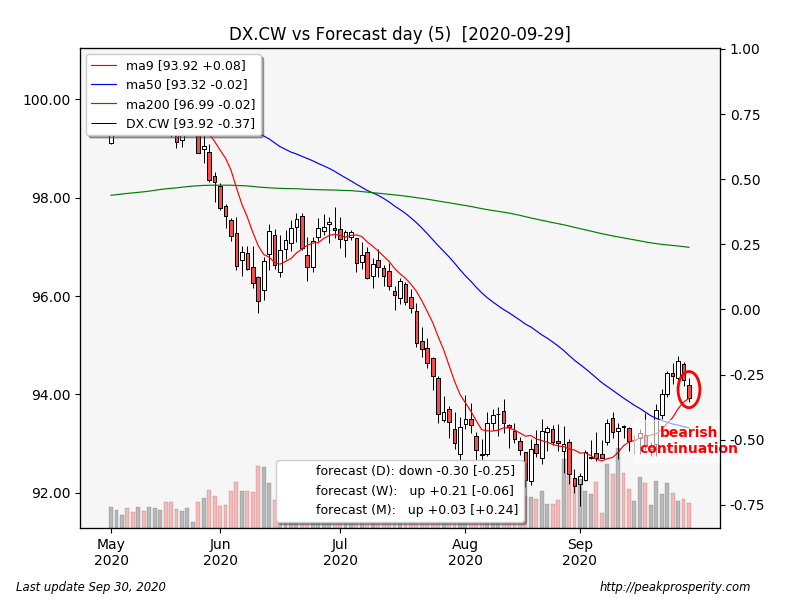 Crude plunged -1.45 [-3.57%] to 39.22 on moderate volume. The swing high candle was a likely bearish reversal (62%), forecaster dropped, dropping into a downtrend. Crude is in an uptrend in the weekly and monthly timeframes.

Ouch. “Just when I thought I was out…they pulled me back in!”

Oilprice had an article which suggested that rising infections in Europe and the US caused the drop in pries – presumably over concerns of a second wave of lockdowns or other restrictions as public policy response. 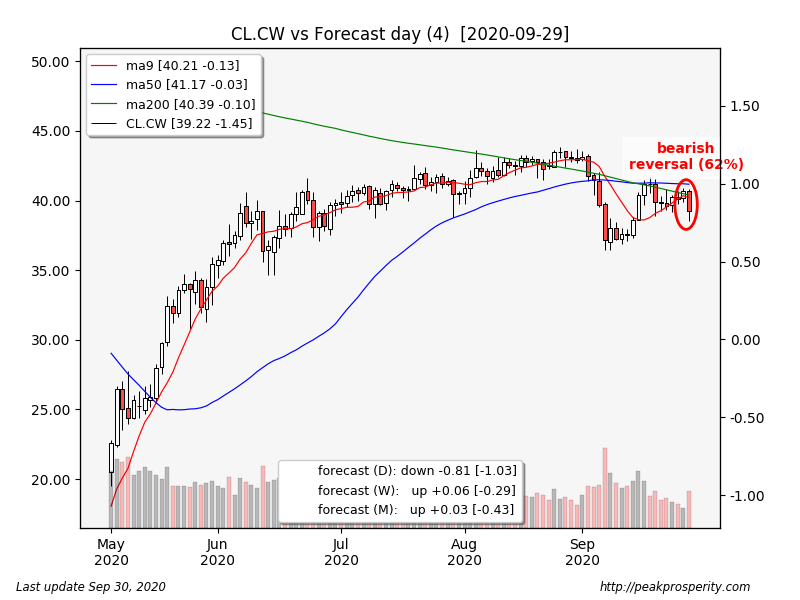 Here’s another tidbit: French energy giant Total is projecting peak oil demand by 2030. Curious – cheap oil has peaked, and now, oil demand is now also allegedly going to peak as well, primarily due to an increase in “low carbon” energy production. The increase in “low carbon” energy production sure couldn’t have come at a better time for the peak oil scenario. I do wonder what the EROEI will be, though.

SPX dropped -16.13 [-0.48%] to 3335.47 on moderately light volume. The short black candle was a bearish continuation, forecaster climbed, moving higher into its uptrend. SPX is in an uptrend in all three timeframes.

Today’s plunge in SPX didn’t seem to derail the uptrend – the candle wasn’t specifically bearish, and forecaster didn’t seem to mind either. On the charts, SPX appears to have (roughly) run into resistance at the 50 MA – that looks bearish to me. 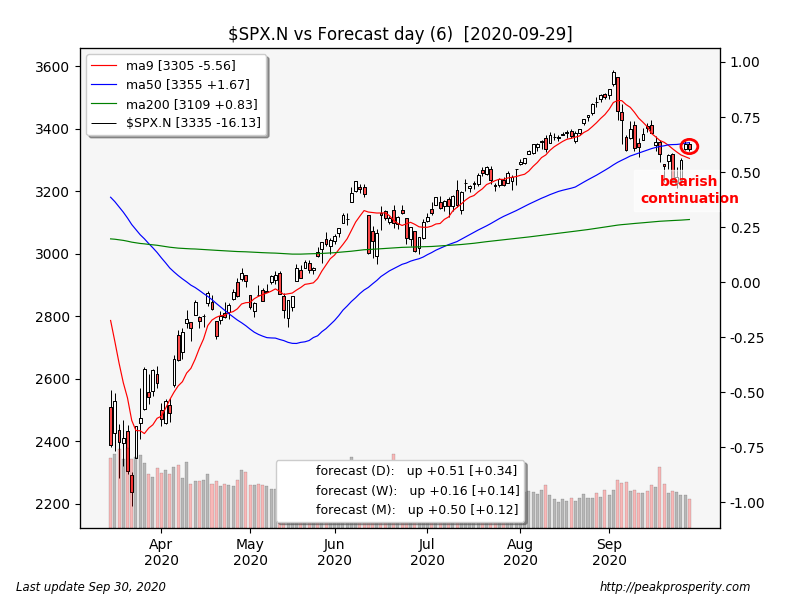 TLT climbed +0.12%. The doji candle was a bullish continuation, forecaster climbed, moving higher into its uptrend. TLT is in an uptrend in the daily and weekly timeframes. The 30-Year yield was unchanged at +0.0 bp to +1.42%.

TY was unchanged. The doji candle was a bullish continuation, forecaster climbed, moving higher into its uptrend. TY is in a downtrend in both the weekly and monthly timeframes. The 10-Year yield fell -2.0 bp to +0.65%.

It was another day of bonds mostly going nowhere. Fed: no more signals from the bond market for you!

JNK climbed +0.08%. The high wave candle was a bullish continuation, forecaster climbed, but remains in a downtrend. JNK is in a downtrend in the weekly timeframe.

Crappy debt actually did fairly well, given the drop in equities. It is in a state of no-trend on the daily. It appeared to run into resistance right at the 9 MA. 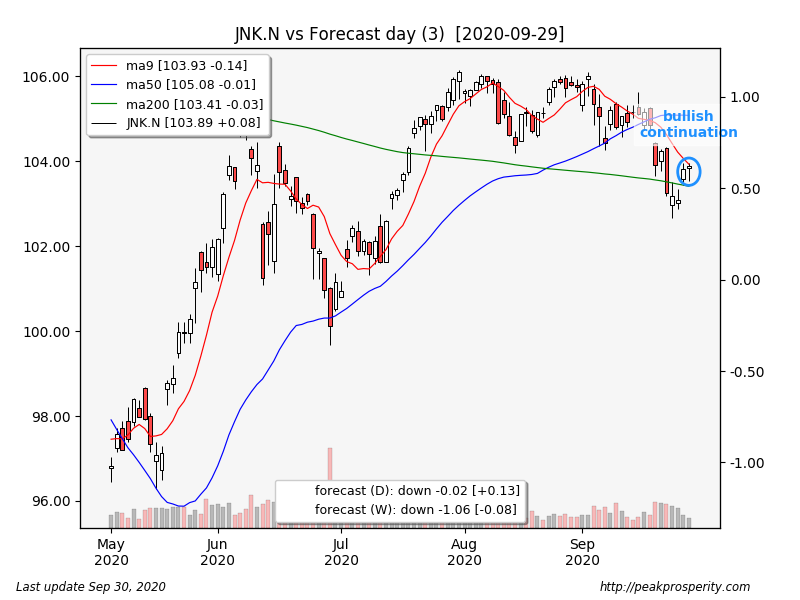 The GLD ETF tonnage on hand was unchanged at +0.00 tons, with 1269 tons remaining in inventory.

Gold, silver, and (to some extent) the miners continue to rebound after last week’s big losses. Silver is looking strongest, while gold’s rally was just a currency effect. The miner chart looks weakest, at least to me. We are coming up on end of month and first notice day; it doesn’t look as though the banksters are particularly worried this time around.

Risk assets were mixed-to-bearish today: equities fell, crude fell harder, while crappy debt and copper mostly just moved sideways. It sure looks as though crude has flipped back into a downtrend. Theory goes this is about Europe and COVID infections and more lockdowns resulting in a large decrease in energy demand.

I’m really starting to think that this large decrease in energy demand is not so accidental.

The buck continues to move lower off the recent highs. Why? I don’t know. There are too many things going on for me to really track them all. The declining buck is helping PM to some degree.

I think it would take a stimulus package to get PM moving again – might we have one?

Pelosi introduced a second $2.2 trillion stimulus package today. Is this just election-year theater? Of course. Will it pass? It might. Certainly both sides of the aisle want to be seen as “doing something” – and free money is definitely a popular thing to be doing, especially if your team is restricting activity in their states in order to make people miserable prior to the election.

If it does pass – or comes close to passing – I expect this will cause PM to take another sharp move higher.

If not – we probably need to rely on a safe haven move and election chaos to push PM prices higher.

At least in the near term anyway. I say this mostly because today’s “big gold rally” was mostly just about the fall in the buck.

Peak oil in 2030? What proportion of cars these days are all electric or hybrid vehicles? What proportion of heavy equipment is electric or hybrid vehicles? Oil is mainly a transportation fuel, it’s not used that much to generate electricity except on some islands (watch Islands of the Future on Netflix for some cool stories). But anyway, is transportation really going to decrease that much over the coming decades? People will stop moving, stop driving, flying etc?

My current car is 10 years old, my wife’s is 3. I do plan to replace my current car in the next few years with a plug in hybrid electric vehicle, but my wife’s will be on the road for another decade, I hope. The replacement cycle for today’s cars are probably at least 10 years and only a low proportion of cars sold today (outside of china of course) are hybrid/electric. Unless there are aggressive mandates by governments for hybrid electric (which is the only way forward in my opinion), then I can’t see peak oil in 2030, especially not as developing countries continue to modernize. However, obviously huge price spikes would drive demand away from trucks/SUV to hybrid cars and a massive depression would have all those people in SE asia continue to drive motorcycles/e-bikes and never be able to afford cars.

Will certainly check out the report, it’s an interesting concept. Any thoughts on which oil companies are positioning themselves best for “peak oil”. Some of the dividends are hard to beat, but XOM in particular is just paying for dividends by accumulating debt. I guess if the FED just buys their bonds and keeps them on their books and lets them ‘expire’ that can work, but I’m not so sure about that, especially if radical left wing people get into office – ‘you’re going to let them get away with causing global warming and not make them pay back the debt?’. Just a thought.

This whole peak oil demand thing – both BP and now Total are talking about this.  It has been a theme on oilprice for a while now.  Perhaps it goes along with the oil supply glut.  The energy space has been in a “bad mood” for years due to shale.

It would be all about the rate of adoption of EVs, as you say.

Cars do seem to be lasting longer (heck, my last car I kept for 18 years).

Do I believe it? Batteries would have to get a lot better than they are now.  EVs would have to end up being a lot cheaper to operate.  Then I could see it.